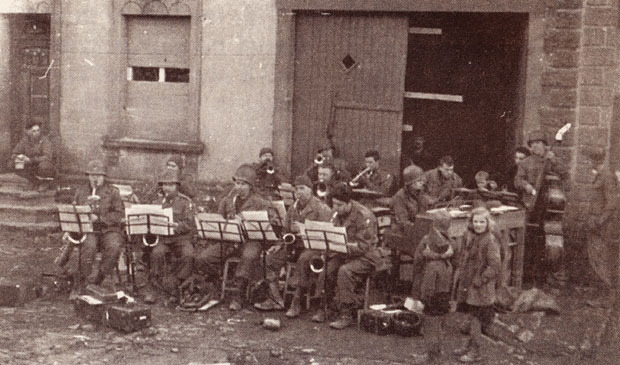 Bill Rankin, who met his wife while playing in the National Guard Band, later was sent abroad.

Here the band is pictured playing for the 883rd Field Artillery in March 1945. 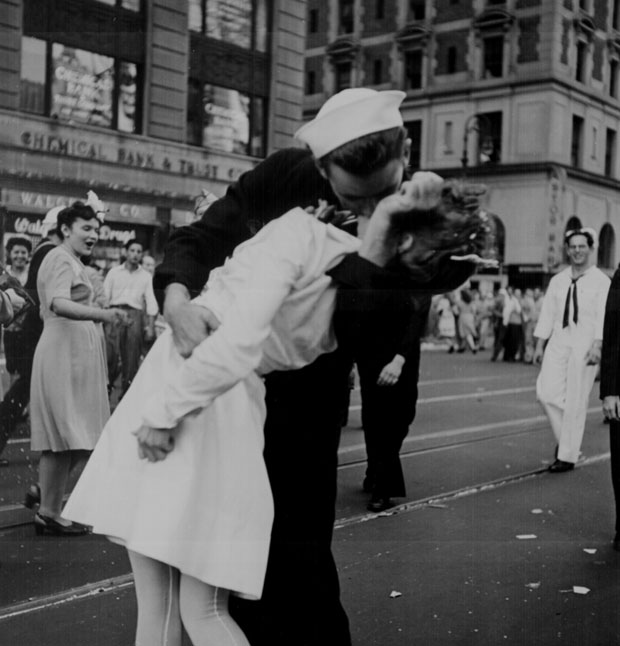 When news broke that Japan had surrendered, people threw anything and kiss anybody in Times Square, as captured on film here when Lt. Victor Jorgensen kissed a nurse Aug. 14, 1945.

Bill Rankin, who met his wife while playing in the National Guard Band, later was sent abroad.

Here the band is pictured playing for the 883rd Field Artillery in March 1945.

When news broke that Japan had surrendered, people threw anything and kiss anybody in Times Square, as captured on film here when Lt. Victor Jorgensen kissed a nurse Aug. 14, 1945.

War years on the home-front. You think of shortages, rationing, the draft, blackouts. But what about romance?

While battles raged in Europe and the Pacific, life went on and people still met, fell in love and married. Soldiers from the Treasure Valley were shipped around the country — and the world. Military men came to the valley — some for training at Gowen Field. They met and courted local girls; many ended up staying here and raising their families.

Some were young — too young it seemed for marriage and family responsibilities. But wartime accelerated their lives. The boys, many not even finished with high school, grew up fast with death on foreign shores a very possible factor in their near future. Hitler’s forces marched through Europe as the world nervously watched.

Bill Rankin of Caldwell was in the National Guard Band with the 183rd Field Artillery. His unit had been called up and sent to Cheyenne, Wyo., in April 1941.

“I was reading the funny papers on Dec. 7, when the news of Pearl Harbor came over the radio,” Rankin said.

The military moved fast after this attack, and Rankin’s unit was immediately sent to Fort Lewis, Wash.

“We were putting up our tents in a muddy field when some guy from the 153rd Infantry back east came up and asked me to have my band play for a dance that night.”

He said his unit was getting ready to ship out to the Pacific, and a nearby church had arranged for some girls to come to a dance in the recreation hall.

However, the sergeant was very persuasive. In spite of the less than favorable conditions, Rankin set up all the instruments off the truck and was playing for the dance on what proved to be a fateful night for him.

Rankin was the band leader and played sax and clarinet.

“I usually looked the crowd over and picked out the pretty girls, so I could meet them during intermission,” he said. That night a girl in a white dress caught his eye, and though he didn’t know it at the time, he was looking at his future wife.

Circumstances seemed to push them together. Before he could even seek her out, he was introduced to the girl during the break, and because she was the president of the USO Club in Tacoma, Wash., she asked him to come and play for their dances.

“We had six or seven dates,” Rankin said, “usually movies, and I always had to leave in the middle in order to make the curfew at the camp.”

One night he missed the curfew because of a disagreement with a money-hungry cab driver. Being late meant he didn’t pick up his pass slip in time and he would have his rank of staff sergeant reduced to private.

He waited for the dreaded call, but heard nothing. About three days later in the Post Exchange, he ran into the persuasive sergeant who had convinced him to play for the dance. He said he had been on duty the night Rankin was late, and he threw the pass in the stove.

“So he saved my rank and got me a wife,” Rankin said with a laugh.

Their second anniversary coincided with D-Day, June 6, 1944, which was quite a way to commemorate their nuptials.

This was certainly a wartime romance that lasted. They celebrated their 52nd anniversary last year and have five children and three grandchildren.

Bobby is known throughout the Treasure Valley for her work with the Red Cross, and Bill, in addition to his musical fame with groups such as the Treasure Valley Concert Band and the Basketball Band for Albertson’s home games, was in the insurance business for 50 years, working for Northwestern Mutual Life Insurance Co.

The Rankins have also worked with student exchange programs, hosting 27 students since 1966.