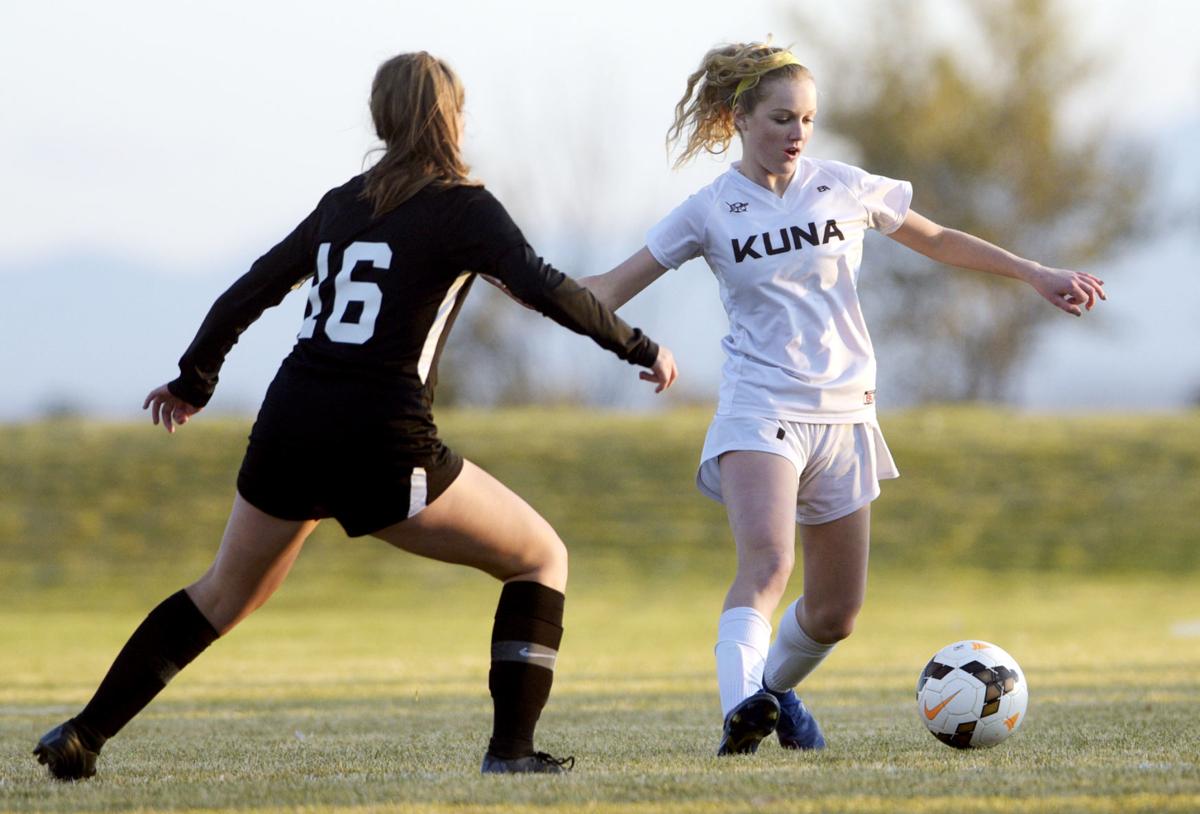 Kuna junior midfielder Izzy Motta (7) lost her father to a heart attack on Sept. 11. After taking some time off, Motta is back playing and has Kuna in contention for the first state title in program history.

Izzy and her father Jason took a recent selfie. 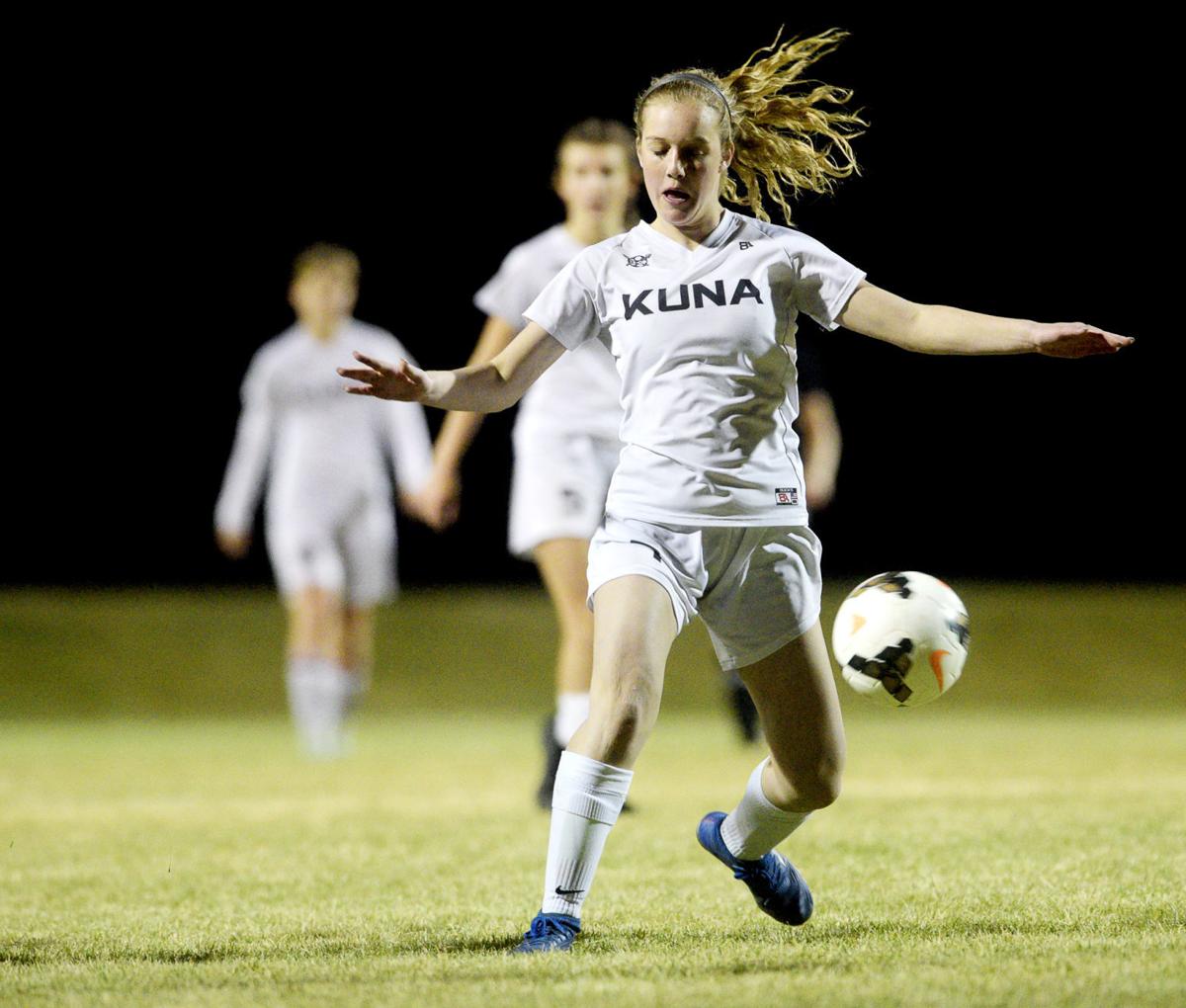 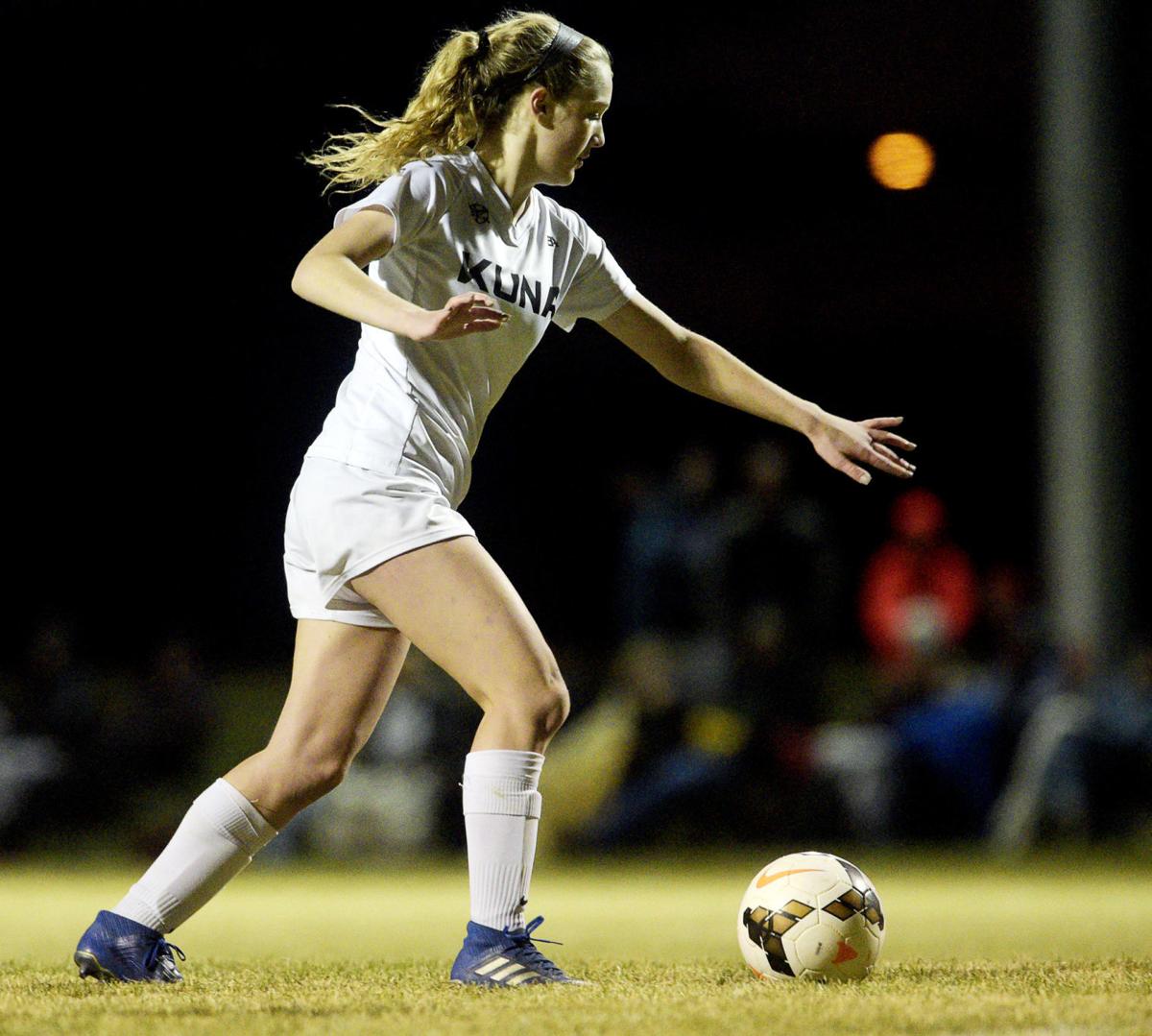 Kuna junior Izzy Motta (7) squares up to kick the ball down the field during the 4A District III girls soccer championship game on Oct. 17. 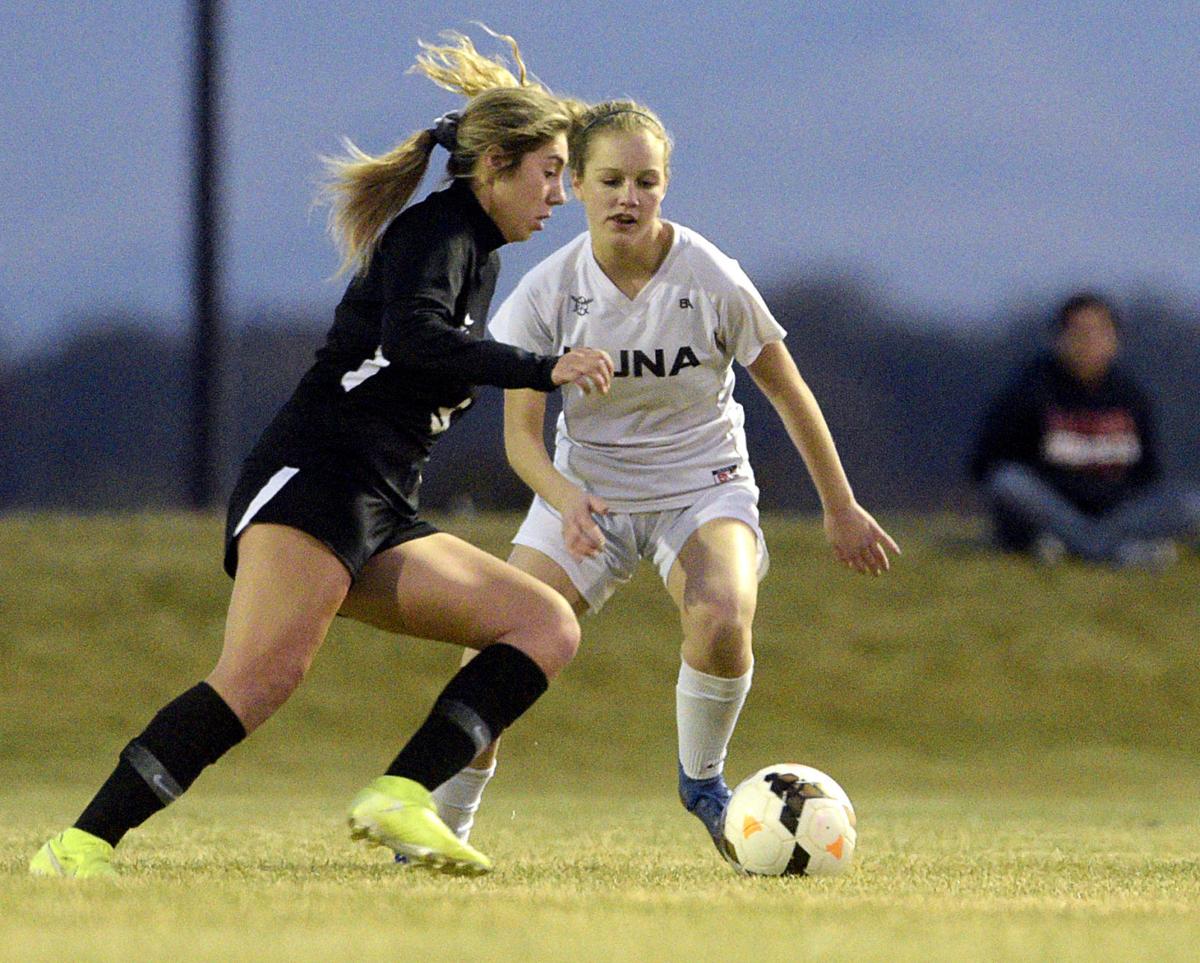 Kuna junior midfielder Izzy Motta (7) lost her father to a heart attack on Sept. 11. After taking some time off, Motta is back playing and has Kuna in contention for the first state title in program history.

Izzy and her father Jason took a recent selfie.

Kuna junior Izzy Motta (7) squares up to kick the ball down the field during the 4A District III girls soccer championship game on Oct. 17.

Editor’s note: This story was published in the Oct. 24 issue of the Idaho Press. Following publication, Kuna advanced to the 4A state championship, where it lost to Sandpoint 2-0.

It’s what her father, Jason Motta, used to scream at her from the sideline.

The Kuna High School girls soccer player won’t hear those words at this week’s 4A state tournament — or anywhere else ever again for that matter. But she would give anything to be able to.

Forty-three days after losing her dad to a heart attack, the junior midfielder will honor his memory by trying to help her team win the first state championship in program history.

“She’s an inspiration,” Kuna coach Chris Reynolds said. “I mean, it could have totally derailed her, but she made a choice to rise above it and continue doing what she loves.

“So for her to come back and be as instrumental to the team as she has been, I think says a lot about just the type of person she is.”

LIKE DAUGHTERJason was a soccer player himself back in the day. He was a part of the Bishop Kelly boys soccer team’s last state championship in 1995. So, naturally, Jason passed down his love of soccer to his three daughters Bailey, Breanne and Izzy. He may have even slipped tiny soccer balls in each of their cribs.

It finally stuck with Izzy, his youngest.

Izzy started playing soccer the moment she could walk. She had her first game with the Kuna Police Activities League by the time she was 4.

There was no yelling back then.

But Jason never missed a game or a chance to feed her passion.

He set up soccer drills in the backyard. One of which had Izzy run around the tree before having to get by him on her way back. There were also juggling competitions. He was never really good at those. And when she was 10, he bought her a soccer goal for Christmas. Jason couldn’t stop her shots either.

It all led to Izzy making and playing for the Boise FC NOVA club team — now the Boise Thorns — her freshman year and not for Kuna. She joined the high school team her sophomore year, playing varsity the last two years.

He was there for every single one of those games too. And frequently gave her honest, constructive feedback, even when she wasn’t with him. He was notorious for having nearly 40-minute long conversations on the phone about soccer in front of her friends.

“Soccer is what bonded us,” Izzy said. “Those memories are really important to keep because he was the one that made me fall in love with the game. I wouldn’t be the player I am today without him.”

FINAL DAYSHis spot was always at the end of the field — away from the other parents because he had a tendency to get a little loud.

“I’d love to hear that again so much,” Izzy said. “It’s something that will be missed forever. It’s one of those things that you don’t think you’ll miss, but you do because you don’t have it anymore.”

The only soul brave enough to sit next to him was his wife, Jenny.

He was doing a whole lot of screaming through the first seven games of this season. Kuna was unbeaten at 6-0-1. It had just snapped three-time reigning state champion Bishop Kelly’s 66-game overall and 57-game 4A Southern Idaho Conference winning streaks with a 0-0 draw on Aug. 29.

Jason was especially riding high after Kuna’s 6-1 win against Columbia on Sept. 10. So much so, he wanted to break his diet by having Izzy run and get him a Butterfinger milkshake from Sonic. She wouldn’t let him. So he settled for watching his favorite comedian, Bill Burr’s new special “Paper Tiger” on Netflix, instead. Jason was laughing so hard that he fell off of the couch.

He closed the evening the same way he always did with an “I love you and good night” to each one of his daughters.

And those were the last words he ever said to Izzy.

A SUDDEN PASSINGJason hardly ever got up to the sound of his own 7 a.m. alarm. Jenny usually had to wake him up.

But he wouldn’t wake up.

He was cold to the touch.

“He just looked so peaceful,” Jenny said. “So I knew at that point.”

She flipped the light on and went and got her middle daughter Breanne, who was already up.

They began arguing back and forth about him really being gone.

It woke up Izzy in the next room.

Izzy walked into the room, admittedly calm at first upon seeing them next to her father’s lifeless body. She had trained in CPR as a lifeguard over the summer and was about to go back into her room to get some equipment when Breanne stopped her. Izzy pleaded with her to help perform CPR and even tried to roll him over by herself.

But the cruel reality finally dawned on her when Breanne uttered the words, “Look at him. He’s freezing cold. He’s pale. He’s gone.”

Izzy immediately ran out of the room in tears. She wouldn’t stop screaming, “He’s my person!”

“I was crying so much to the point that it was physically making me tired,” Izzy said.

The medical examiner determined Jason had died from a heart attack — aptly named the “widow maker.” It happens when an artery gets almost or completely blocked. The chances of survival are almost none without getting to a hospital within 10-30 minutes.

“I can remember that day even thinking in my head I feel the exact same way as I did 18 years ago,” Jenny said. “Just out of it and the world’s upside down. September 11 will never be a good day.”

Izzy didn’t go to practice that day. Reynolds thought it was particularly strange because she never misses a practice. When he noticed Ryli Frost and Jordan Armstrong visibly shaken, he pulled them aside to discover the heartbreaking news.

Reynolds immediately went to Izzy’s house after practice. He was joined by several of his own players, including junior striker Jaclyn Olds, who had left school in the middle of the day after hearing the news.

“He was like a second father to me and a lot of the other girls,” Olds said.

The team organized a meal train, got the family a card and a big bouquet of flowers that night.

Kuna had a game against Nampa the following day.

The Kavemen shut out Nampa 4-0 with Izzy at home. But several of her teammates, still in their uniforms, came back over to tell Izzy all about it.

And that’s how it was for a little while. Izzy didn’t go to school, practice or games for the next two weeks.

“I really wanted to go back, but my mind just wouldn’t let me,” Izzy said. “When I thought of soccer, I thought of him. So it was too painful to think about, let alone play.”

But during that time, Izzy still kept soccer close to her heart. In the midst of funeral arrangements, coupled with the countless visitors coming in and out of the house, she used soccer to get away from it all. She routinely went into her room to juggle and kick soccer balls into her own bed. Izzy even went to the backyard and did the run around the tree like she and her dad used to.

The day was Sept. 24 at her dad’s alma mater, Bishop Kelly.

Izzy cried the whole bus ride over. She was the captain that day. It was something she was supposed to be on Sept. 12.

She entered the game for the first time seven minutes in. Kuna suffered its first loss of the season 2-0.

However, it didn’t matter

“I’m getting goosebumps just thinking about her coming back,” Armstrong said. “There was just such a change in the team drastically. Everything just started running smoothly and everything was complete again.”

But it hasn’t gotten easier for Izzy.

She recalled looking over at the sideline during Kuna’s opening-round district game against Ridgevue on Oct. 12 and seeing her mom all by herself. She then broke into tears after putting her gear in the car following a 1-0 loss last Thursday to Bishop Kelly in the 4A District III Championship game.

“It wasn’t even because we lost. It was because I kept thinking about how unfair this all is. He should still be here,” Izzy said. “I just wanted to talk to him about the game and no one else because when I’d get off the field, he’d know exactly what to say to me.

“I feel bad because he would have loved seeing us right here. I wish I could just show him we made it.”

Izzy, 16, has been with her team every step of the way since her return. And Kuna has rallied around her for one of the best seasons in program history.

“The support didn’t go unnoticed to me at all,” Izzy said. “I liked how they all treated me as a regular person and not some charity case. There was no ‘Oh my gosh I can’t believe she’s back.’ They were actually there for me in a real way and if I needed anything, they were there. I think that was really important in me trying to feel normal again.”

Kuna is back in state for the first time since 2015 with the SIC’s top scoring offense at 5.3 goals per game. Its only two losses have been to Bishop Kelly — the winner of the last three state titles. But the combined score of those three games has only been 3-0.

And the only offense better this season in the 4A classification is Kuna’s first-round opponent, Twin Falls, at 6.8 goals per game.

The only thing missing is Jason and his signature catchphrases.

But they’re still there. She can’t get them out of her head. How can she? They’re a part of him and her forever.

“When I’m playing I can hear his voice and think ‘Oh I better not do that,’” Izzy said. “It’s a different meaning when I go out and play now for sure. It’s not just go win this game anymore. It’s bigger now because I’m playing for him and keeping his memory alive.”

Pairings for the state boys and girls soccer tournaments can be found in the local scoreboard on B3.