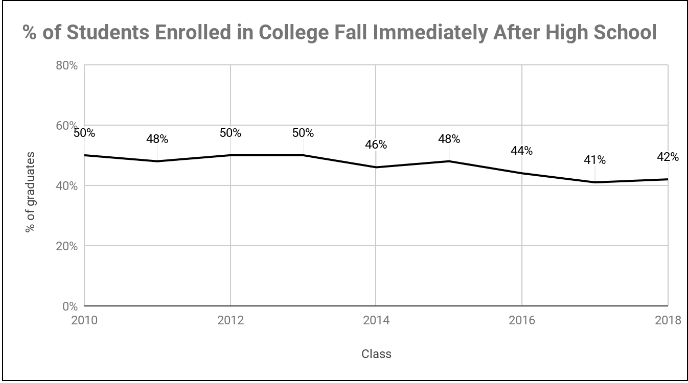 The number of students enrolled in college immediately after high school has dropped 8% overall since 2010. 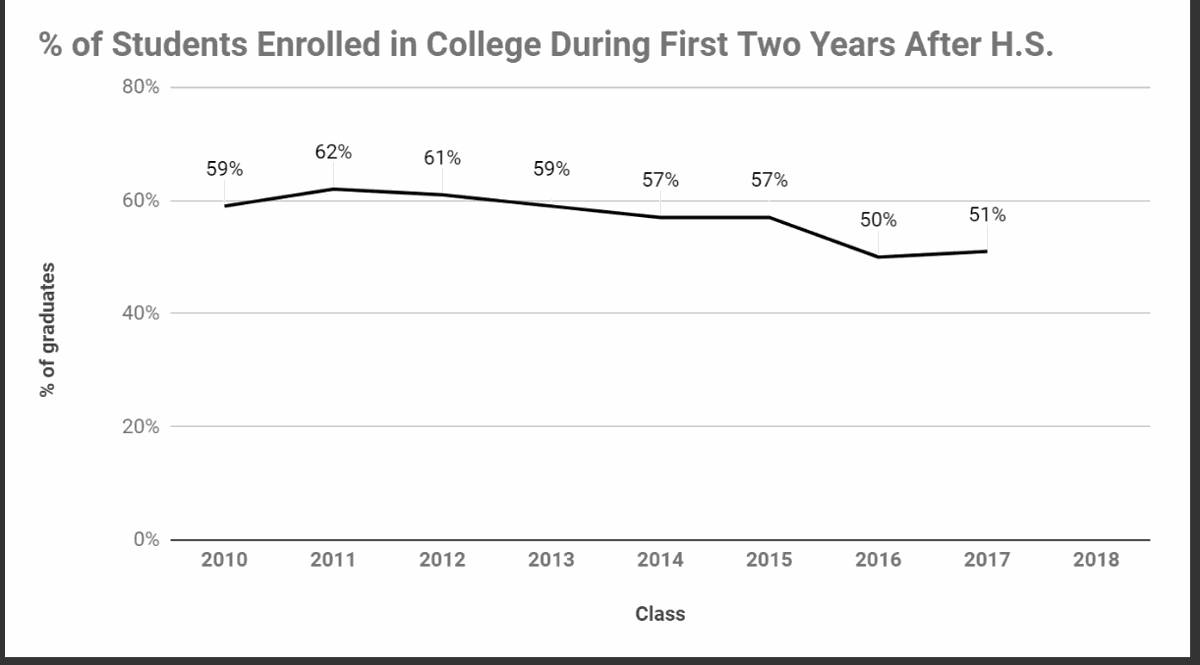 The number of students enrolled in college during the first two years after high school has also declined since 2010, from 59% to 51%, though there was a brief increase in 2011 and 2012. 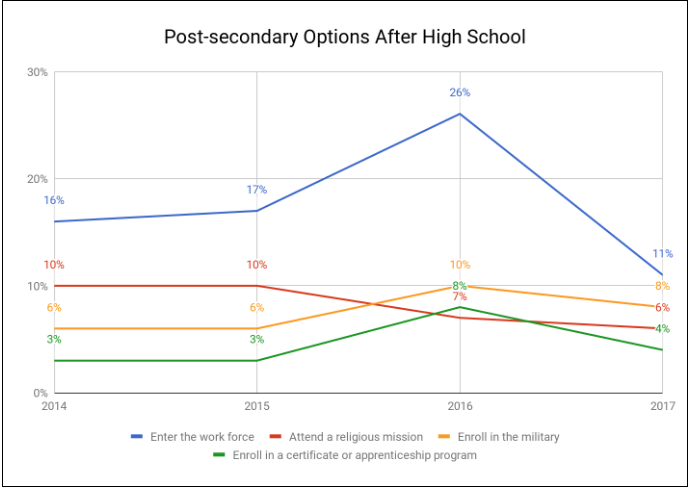 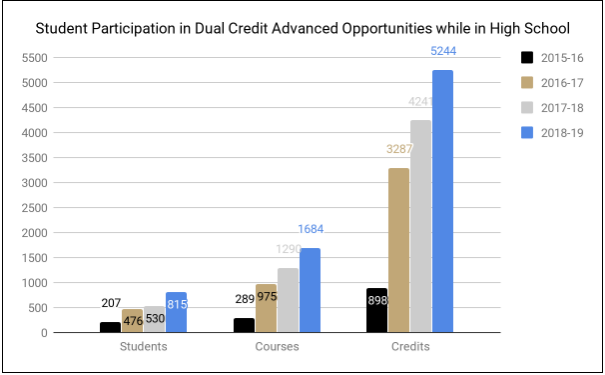 There are more students in the Kuna School District taking advantage of dual credit courses than ever before. 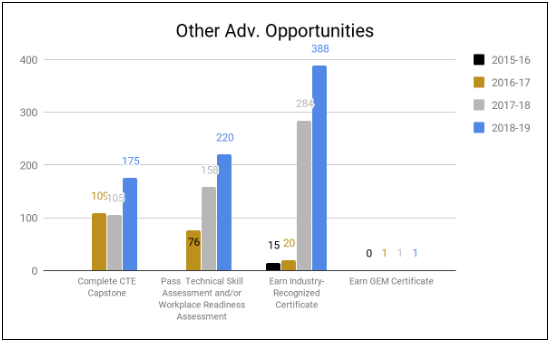 The district’s strategic plan stipulates that by 2023, 80% of students will graduate having done at least one of the following: completed a GEM certificate or an associate’s degree, completed a career and technical education capstone, participated in an apprenticeship program, passed a workplace readiness exam, received an industry-recognized certificate, or taken a college-level, or dual-credit, class while in high school.

In 2014, Superintendent Wendy Johnson and the Kuna School District board of trustees decided that by 2023, 80% of students who graduate from the school district will graduate “future ready.” To help with this goal, in October 2018, they redefined what exactly that means.

Whereas the school district once counted only students going to college in its “go-on rates,” it now includes a number of other paths, such as enlisting in the military, enrolling in a service program — such as a religious mission — or joining the workforce right after high school. The original definition, according to Johnson, failed to tell the stories of students who choose not to pursue college after high school.

Widening the definition, she said, conveys to students that success after high school doesn’t always look like a college degree. The change in definition also comes in response to data from the school district’s annual report, which shows an overall decrease in the number of students attending a university after high school.

According to Johnson, as the economy improved after 2009, they started to see a downward trend in students going to college, as students found they could successfully enter the workforce rather than attend a university. Kathy Purin, Kuna High School’s college and career director, agreed.

“If you look at our go-on rates, they were actually much higher in, say, 2011,” Purin said. “We were like 60%. We’re down around 42% now. The reason why, and the other schools tell me this too, is because the economy was not strong, so it’s economic-based.”

However, the data also shows a decrease in students taking non-education pathways — such as getting a job — after graduating high school. From 2014 to 2017, the number of students entering the workforce dropped from 16% to 11%, with a brief spike up to 26% in 2016. Further, during the same period, the number of students who attended a religious mission decreased from 10% to 6%.

Go-on rates come with caveats. For example, the data they use is gathered by The National Student Clearinghouse, an entity that collects enrollment, retention and degree records for more than 96% of students in public and private institutions. Some schools’ information is not tracked, such as the Northwest Lineman College or Paul Mitchell, so while the school district views those as viable post-secondary options, their data isn’t included.

Further, while most college enrollment is tracked by The National Student Clearinghouse, other options are not as easily recorded. As such, the school district relies on self-reported information from students to gather their data. Each May, the school district gives every senior an exit survey to identify those students who report pathways other than college, though this method relies on students’ full cooperation.

To further help students become “future ready” in the field that they value, the school district has also implemented more dual-credit courses and career and technical education courses. The district will also be employing AVID, a strategy intended to change schools’ cultures and improve student success, in schools starting this fall.

AVID, or Advancement Via Individual Determination, is a nonprofit organization that helps schools “shift to a more equitable, student-centered approach” in teaching. The program has a special focus on underserved populations — including first-generation college students and low-income and minority students — that is aimed at closing the opportunity gap. This month, several Ross Elementary School teachers were sent to Seattle to learn how to best implement AVID in the fall.

The district’s strategic plan stipulates that by 2023, 80% of students will graduate having done at least one of the following: completed a GEM (general education matriculation) certificate or an associate degree, completed a career and technical education capstone, participated in an apprenticeship program, passed a workplace readiness exam, received an industry-recognized certificate, or taken a college-level, or dual-credit, class while in high school.

So far, this definition of “future ready” has shown results, and the number of students taking part in advanced opportunities has grown in bounds.

For the same period, the number of students earning an industry-recognized certificate increased from 15 to 388.

Kathy Purin has worked for the district for 14 years and has watched the district try to shift the culture surrounding go-on rates from being college-centric to passion-centric.

“We’re rethinking what success is,” Purin said. To do so, they’re trying to help kids find what they are passionate about and give them the opportunity to pursue it.

“What I’ve found in all my years of experience is if you try to tell a senior in high school, ‘Do this, but it doesn’t have any reality to you right now,’ they get kind of irritated,” Purin said. “Then they really dig their heels in. You’re better off to go with what they value and then work on their action statements for what they value instead of trying to tell them what they’re going to value.”

All these opportunities, according to Johnson, are bolstering the meaning of “future ready” and preparing students for success after high school, whether that be through college or something else.

“What we want is people to contribute to society,” Johnson said. “We want them to be able to provide for themselves and their family and have a quality life — however that is defined by each person.”