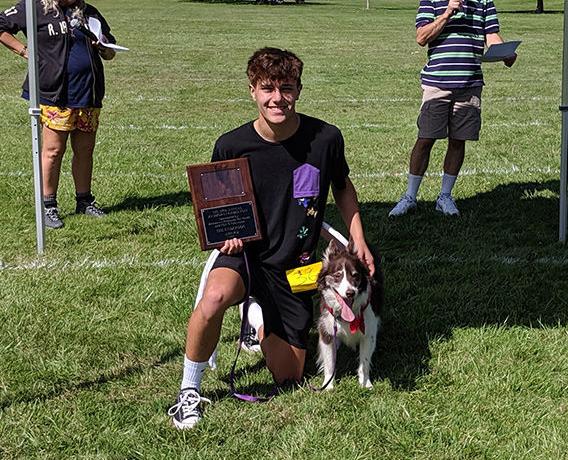 Wyatt Briggs, 17, of Kuna, and Dusty Rose, Briggs’ 6-year-old border collie, pose for a photo with a plaque they won at the 27th annual Zamzows Frisbee Fest on Sept. 14 at Ann Morrison Park in Boise. 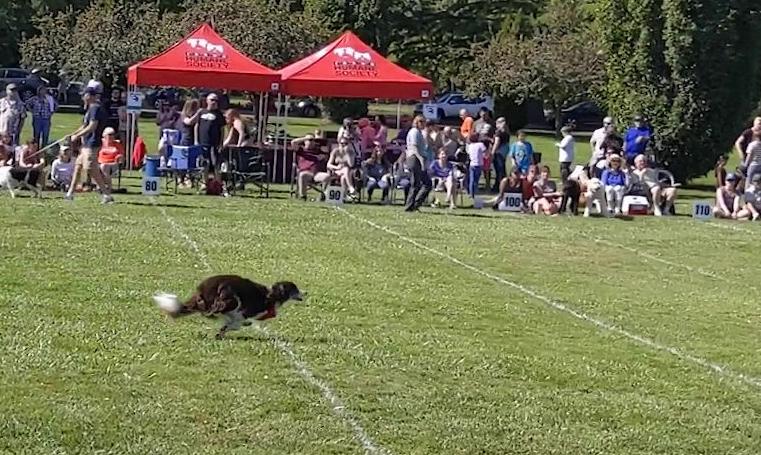 Dusty Rose, a 6-year-old border collie, chases down a Frisbee at the 27th annual Zamzows Frisbee Fest on Sept. 14 at Ann Morrison Park in Boise.

Wyatt Briggs, 17, of Kuna, and Dusty Rose, Briggs’ 6-year-old border collie, pose for a photo with a plaque they won at the 27th annual Zamzows Frisbee Fest on Sept. 14 at Ann Morrison Park in Boise.

Dusty Rose, a 6-year-old border collie, chases down a Frisbee at the 27th annual Zamzows Frisbee Fest on Sept. 14 at Ann Morrison Park in Boise.

There must be something in Kuna’s kibble. The city proved this weekend that it’s home to some of the Treasure Valley’s most elite Frisbee-catching canines.

Four Kuna dogs, belonging to three different humans, won more than half of the awards at the 27th annual Zamzows Frisbee Fest, a flying disc-fetching competition that showcases dogs’ talents for tracking Frisbees and catching them with style.

The event — hosted by Zamzows, a local lawn, garden and pet store, and the Idaho Humane Society — had 81 contestants and hosted more than 1,000 spectators on Saturday at Ann Morrison Park in Boise.

Spectators got in free, and dog owners paid $15 per contestant, to cover the cost of the event. Concession proceeds went to the Idaho Humane Society.

While Frisbee Fest may sound like a giant dog-fetching party — and it was — its larger purpose was to celebrate the dogs, by showcasing their abilities.

“It’s designed to be fun for the dogs and fun for the humans to watch,” said Art Gregory, a spokesman for Zamzows, who has been involved in Frisbee Fest since its inception in 1993. “It’s really a celebration of the bond between humans and animals.”

And it wasn’t just a game of fetch.

Two additional awards were given, one for the best catch of the day and one for the “Underdog,” awarded to a dog weighing 35 pounds or less with the highest three-throw cumulative distance.

First, second and third place in each category received gift cards to Zamzows, totaling $100, $75 and $50, respectively.

The field of play was 200-feet long and 100-feet wide. Three judges awarded style points for a successful catch — the prettier the catch, the more points were awarded.

The longest throw and catch this year — recorded by Caleb Long of Caldwell and his border collie/Aussie mix, Ruby — was 163 feet, almost half of the length of a football field.

But the art of human/canine disk throwing is not so much about strength as it is about skill, according to Gregory.

Kuna dogs put that skill on display this weekend, winning six of the 11 Frisbee Fest awards.

Owners are allowed to select music for their dogs while they compete, whether to get them into a fetching rhythm or just let them ham it up with the crowd after a stylish catch. Betty Lee’s song: “Black Betty” by Ram Jam.

“These dogs and these owners all have a personality,” Gregory said. “It’s show business.”

For Wyatt Briggs, 17, of Kuna, the competition is about having fun with his dog, Dusty Rose — and giving her an opportunity to channel her nearly limitless energy.

“We play year-around because she’s such an energetic dog,” Briggs said. “If she’s not playing Frisbee, she wants to play Frisbee.”

Briggs, a senior at Kuna High School, and Dusty Rose, a 6-year-old border collie, have competed in the last four Frisbee Fests, and they’ve won awards every year.

This year, Briggs and Dusty Rose took second place in Style and third place in Adult Distance. They also won the Underdog award, with a combined three-throw distance of 453 feet.

“They are working dogs, and they want to work,” he said. “If you don’t give a border collie a job, it will find one.”

“She’s just a really smart dog,” Briggs said. “She can see where I’m about to throw it, and I can turn, and she knows exactly where the Frisbee’s going by the way I’m positioned. It floats out there, and she does all the work.”

Briggs and Dusty Rose play with the Frisbee on the field at Crimson Point Elementary School. About two weeks before Frisbee Fest each year, they visit the field more often, Briggs practicing his throw at a 45-degree angle, and Dusty Rose doing what she does best.

Both dog and human are competitive, so Dusty Rose and Briggs are happy when they win awards at Frisbee Fest.

“In the end, I’m there just to have fun with her,” Briggs said.