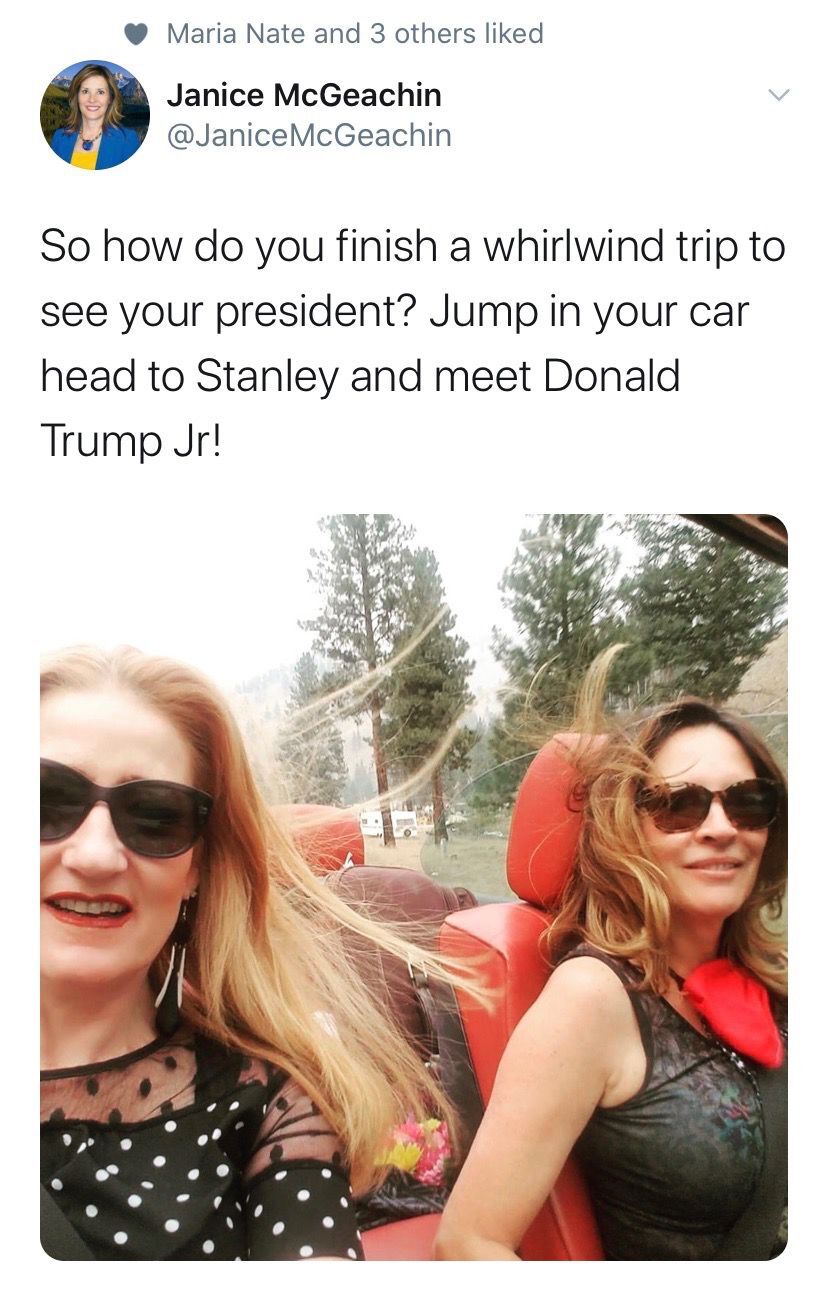 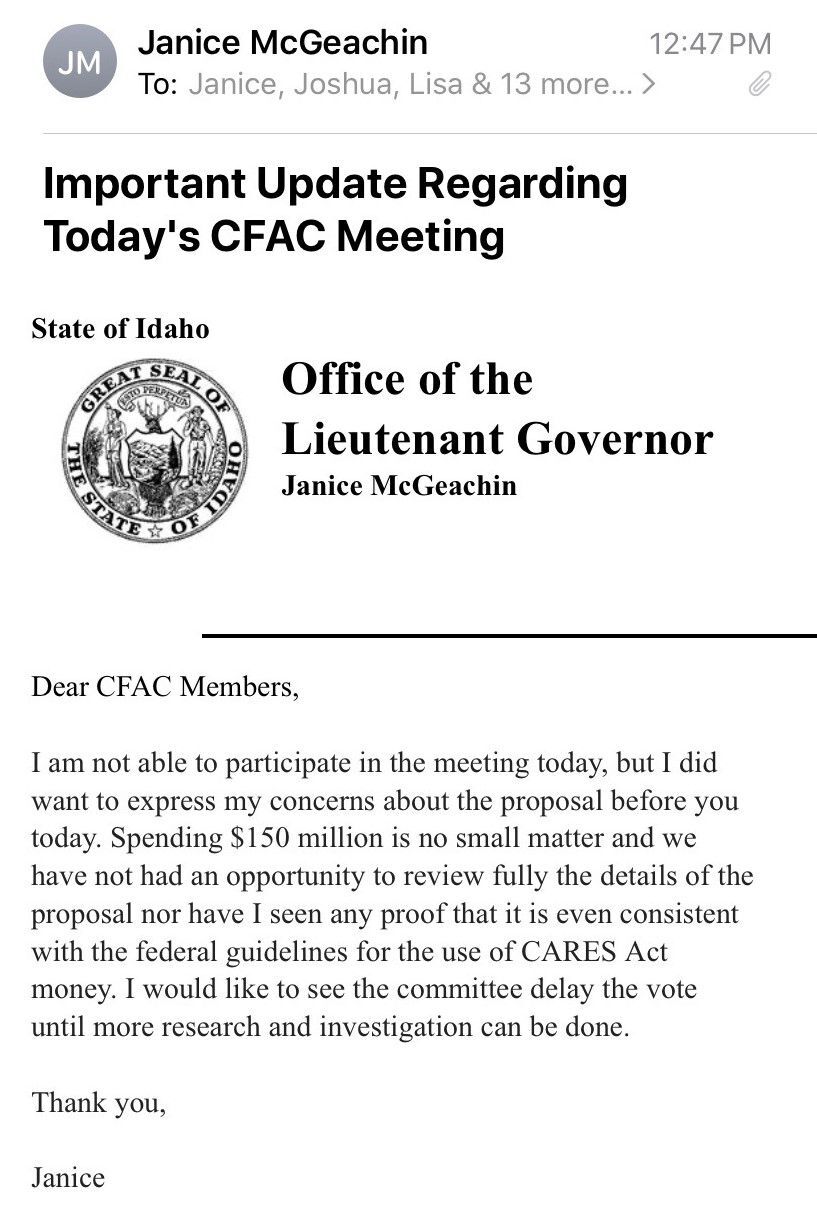 CFAC, the governor’s Coronavirus Financial Advisory Committee, voted unanimously today in favor of restoring the $99 million in school budget cuts and adding $50 million for Idaho families by tapping CARES Act funds, but Lt. Gov. Janice McGeachin, who skipped the meeting to attend a campaign fundraiser with Donald Trump Jr. in Stanley, submitted a letter calling for putting off the vote, saying it was “no small matter” and should be studied more. She was the only one to raise any objections.

Here’s the email McGeachin sent to her fellow CFAC members just 13 minutes before the start of today’s 1 p.m. meeting:

I am not able to participate in the meeting today, but I did want to express my concerns about the proposal before you today. Spending $150 million is no small matter and we have not had an opportunity to review fully the details of the proposal nor have I seen any proof that it is even consistent with the federal guidelines for the use of CARES Act money. I would like to see the committee delay the vote until more research and investigation can be done.

During the meeting, members discussed in depth how recently issued U.S. Treasury guidance authorized the spending, which comes to $315 for every Idaho public school student. CFAC member Shawn Keough of Sandpoint said, “I just want to express support. … We’re in uncharted waters, and the news of the need for a holdback was troubling at best for many of our districts and communities. And this opportunity with the new guidance … seems very plain language. This, I believe, will be very helpful for all the districts as they struggle.”

Sen. Lori Den Hartog, D-Meridian, spoke in favor of the new $50 million “Strong Families, Strong Students” program to provide aid for Idaho families struggling to provide their school-age children with education amid coronavirus-related school shutdowns and distance learning requirements; she and Rep. Wendy Horman, R-Idaho Falls, worked with the administration and state education officials to help develop that program. “We need to get this money out quickly,” Den Hartog said. “Families are in the midst of all of these decisions right now and would like to see it be a simple process that can also help those families that are most at risk.” The program will be opened first to the neediest families.

About two hours before the meeting started, McGeachin tweeted a photo of herself driving a convertible, writing that she was on her way to the central Idaho town of Stanley to meet Donald Trump Jr., who was holding a fundraising event for President Donald Trump, the AP reported. Tickets to the event cost $2,800 per person.

Here's a full report from the Associated Press:

The committee also unanimously approved spending $50 million to be made available to parents so they’re less likely to leave the workforce or dip into household money while their children learn amid the challenges posed by the pandemic. That money will be distributed based on income and can be used to purchase educational materials, computers and other services.

The $100 million allocated to Idaho's 310,000 school kids will be divvied up among schools at $315 per student. But officials are having to use old enrollment numbers that might not be accurate, so the committee left open the possibility of some school districts getting more money later.

Alex Adams, Little’s budget chief and the committee’s chair, said the state has about $200 million left in federal relief money after allocating the $150 million for education.

Shawn Keough, a State Board of Education member and a former Republican state senator, voiced support for Little's plan.

“We're in uncharted waters," she said. “This I believe will be very helpful for all our (school) districts.”

Adams said there was an urgency to get the money distributed given that schools have opened and many students are learning online.

The $50 million for the Strong Families, Strong Students initiative program will provide up to $1,500 per child with a maximum of $3,500 per family. Many students are learning at home as school districts try to avoid spreading the virus.

The money will help about 30,000 kids, and Adams said after the meeting that applications would go out in waves based on need until the money ran out. Officials have said that money could help close achievement gaps among students whose families can't afford internet access or the electronic devices needed to learn remotely.

Republican Sen. Lori Den Hartog isn't on the committee but has helped plan how to spend the money to keep it within federal spending guidelines, urging the committee to pass the plan.

“I have heard from many constituents who have been trying to balance work and school for their kids,” she said. “The (school) districts are all doing the best they can.”

Republican Lt. Gov. Janice McGeachin in an email sent 13 minutes before the start of the 1 p.m. meeting said she was unable to participate and asked committee members to delay taking any action.

But none of the members made a motion to delay the committee's work when given the opportunity.

About two hours before the meeting started, McGeachin tweeted a photo of herself driving a convertible, writing that she was on her way to the central Idaho town of Stanley to meet Donald Trump Jr., who was holding a fundraising event for President Donald Trump. Tickets to the event cost $2,800 per person.

Johns Hopkins University reports that Idaho has more than 35,000 coronavirus cases and 419 deaths.

For most people, the coronavirus causes mild or moderate symptoms, such as fever and cough that clear up in two to three weeks. But for some, it can cause more severe illness, including pneumonia, and death.