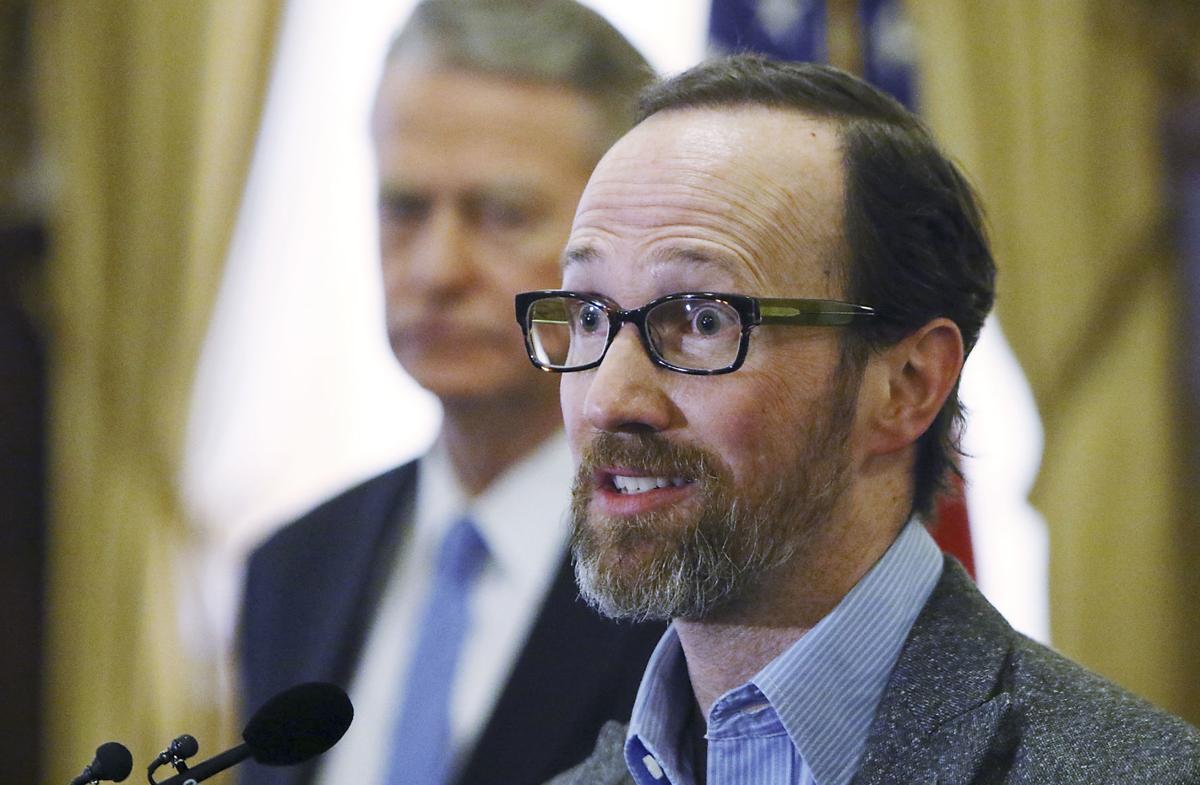 Brandon Atkins, of Central District Health, speaks to members of the media about the state’s first confirmed case of coronavirus during a press conference at the Idaho State Capitol, Friday, March 13, 2020. 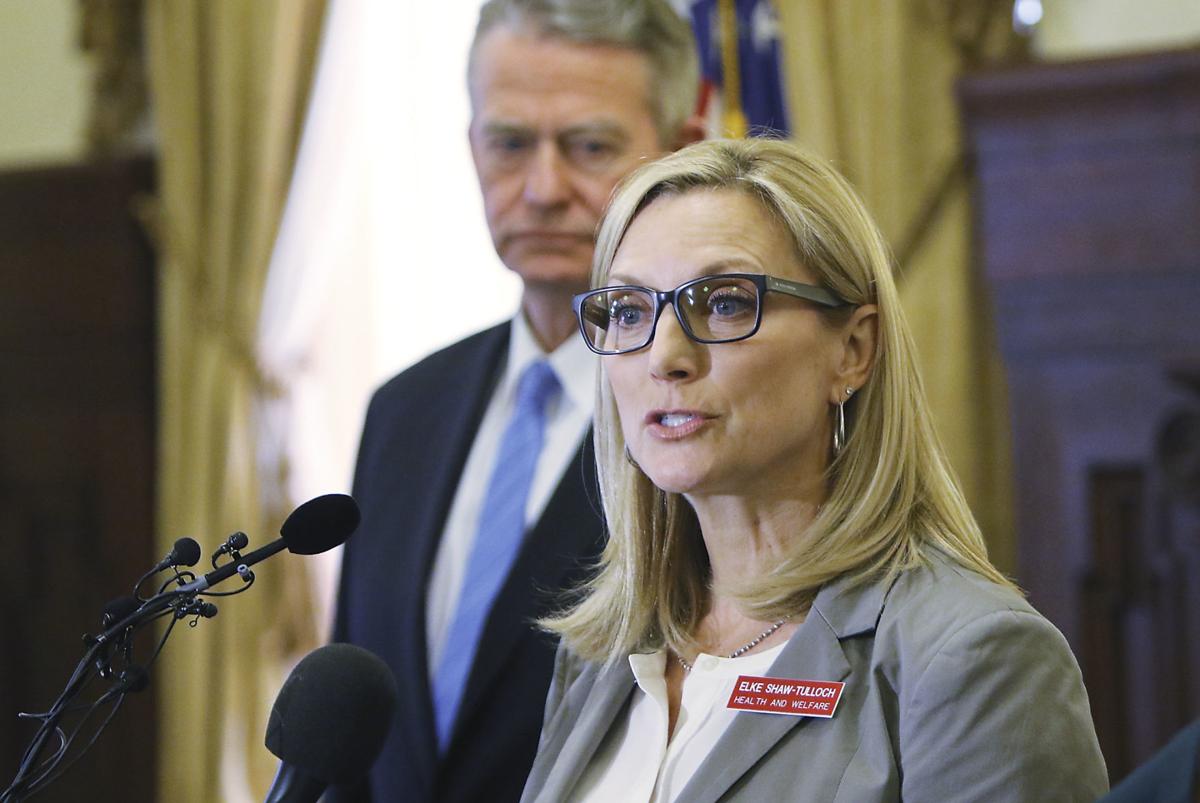 Gov. Brad Little looks on as Elke Shaw-Tulloch, with the Idaho State Department of Health & Welfare, speaks to members of the media about the state's first confirmed case of coronavirus during a press conference at the Idaho State Capitol, Friday, March 13, 2020.

Brandon Atkins, of Central District Health, speaks to members of the media about the state’s first confirmed case of coronavirus during a press conference at the Idaho State Capitol, Friday, March 13, 2020.

Gov. Brad Little looks on as Elke Shaw-Tulloch, with the Idaho State Department of Health & Welfare, speaks to members of the media about the state's first confirmed case of coronavirus during a press conference at the Idaho State Capitol, Friday, March 13, 2020.

When Rep. Heather Scott, R-Blanchard, posted online criticism this week of Idaho’s increasing efforts to trace the recent steps of people infected with COVID-19, the comments on her posts were largely positive.

However large or small a segment of the population her commenters represented, they were concerned about government intrusion into the lives of citizens.

Other countries have much more robust, proactive contact-tracing programs, but the question of what it would look like to implement such measures in the U.S. hinges on Americans’ value of personal civil liberties.

“Particularly in this country there’s a really strong strain of our DNA that’s sort of focused on individual liberty and freedom, even more so than other kinds of western democracies that maybe have more robust government structures,” said Charles Hunt, Ph.D, who teaches political science at Boise State University. “And of course you have the ideological partisan divide on issues of individual liberties … that have been with us forever, and it’s sort of reaching a fever pitch now.”

Contact tracing — the practice of tracking down where a person has been in the past week or so before they tested positive for COVID-19, and who they had been in close proximity to — has been heralded by public health officials as a key step to reopening the U.S. economy. The idea is to find people who have been exposed to the new coronavirus and telling them, so they can self-isolate and prevent the spread of disease.

Scott, who last month compared Little's stay-home order to Nazi Germany, took aim at his announcement in a Facebook post Wednesday, urging Idahoans to "know your rights or lose them." Her post touches a nerve of uncertainty and skepticism seen nationwide about the idea of a government entity tracing one's recent movements.

Scott did not return a call Thursday requesting comment.

Hunt speculated that if people are concerned about contact tracing, it might, in part, be because they are unfamiliar with epidemiology and viruses, and how they work. Just the phrase — contact tracing — is new to many Americans, said Steve Utych, another political science professor at Boise State.

At its core, Utych pointed out, contact tracing is a form of surveillance.

But it’s also not new — as recently as February, Idaho’s Central District Health conducted a contact-tracing effort after a restaurant employee in Boise tested positive for hepatitis A and worked while contagious, said Brandon Atkins, program manager for the district’s family and clinic services.

Contact tracing looks something like detective work. After a person tests positive for the illness in question, public health employees ask them where they’ve been recently and who they have been in close contact with. The employees then try to get in contact with people who could have been infected.

“But then if you have someone who works in a commune setting, you know, someone who works in the grocery store … if you were to go in, of course you’d be looking at what kind of shifts were you working? Where were you working when you were on those shifts? Plus a little about the activity that you were participating in — were you checking people out at the front of the grocery store? Were you bagging groceries for people? … How many people do you think you were interacting with?” Atkins said. “And again, contact tracing in that setting is much more challenging because those individuals don’t know the people they’re interacting with.”

Public health officials ask about the substance of a person’s interactions with others as well. Atkins cited the example of an out-of-state case in which an infected person attended choir practice. Given the close proximity of the singers to one another, and the fact that they were expelling air and moisture from their mouths into the air around them, it was likely the person had spread the virus to others in the choir.

“Much, much, much higher risk activity than someone who is on their back porch talking to neighbors off their deck six feet away,” Atkins said. “Those are the types of details that we look for when we really drill down into contact tracing."

PREPARING FOR THE NEXT SPIKE

Doing that type of investigating for each case is time consuming. Central District Health — which serves Ada, Boise, Elmore and Valley counties — is counting roughly four to nine new cases of COVID-19 every day. That’s a manageable number for contact tracing, Atkins said.

A month or more ago, when Ada County was the epicenter of Idaho’s outbreak and cases were still climbing sharply, contact tracing was more difficult, he said, and district employees were pulled from other tasks to help with it.

With some of the nation's top public health officials warning of another spike in cases, Atkins said the district is looking to expand its capacity for contact tracing.

“We anticipate that over the next week we will have hired between 10 to 15 new temporary staff to assist with that,” Atkins said on Wednesday.

"We’ll keep our fingers crossed that we won’t ever see the surge capacity … but we’re also keeping ourselves open to the possibility that we will need to train even more staff than that,” he said. “So yes, we’re trying to get ahead of that and get people on board so we can deal with the next (spike).”

Some states — such as Washington and Delaware — have tapped the ranks of their national guard to help with contact tracing. That hasn’t happened in Idaho.

Contact tracing in the United States is conducted retroactively — it’s essentially damage control. But other countries might pursue more aggressive methods, such as apps on smartphones, to help track a person’s movement so public health officials can know where they’ve been and who they’ve been in contact with should they test positive for COVID-19.

The use of such an app could be seen as a trade-off, Utych said — it could hasten the reopening of the economy, even if it means sacrificing a fair portion of one’s personal privacy.

Part of the skepticism, however, could be Americans’ general lack of knowledge about the new coronavirus, and viruses in general, Hunt said. The pandemic is unlike any other problem most living Americans have ever had to deal with.

“With other kinds of challenges, things like terrorist attacks — think about what happened on (Sept. 11, 2001) — Americans … understood what a terrorist attack is,” Hunt said. “They understood sort of, vaguely, who the quote-unquote enemy was. With this virus we’re learning all these news terms … Americans may not know a lot about international terrorism, but they know even less about global pandemics and viruses.”

Both Hunt and Utych acknowledged there will always be a vocal minority that’s skeptical of just about everything the government does, such as the hundreds who gathered in front of the Idaho Statehouse last month to protest Little’s stay-home order. The state's Lt. Gov. Janice McGeachin has voiced opposition to Little's measures aimed to slow the spread of the virus.

But overall, a strong majority of Americans — 80% — believe stay-home orders were worth it to save lives, Hunt said, citing a nationally representative poll of 1,202 people conducted last month by the Kaiser Family Foundation, a nonprofit research firm focused on health care issues.

“One of the things that shocked me the most is how consistently supportive over such a long period of time a vast majority of Americans are of really strict measures,” he said. "I would’ve thought more fatigue would’ve set in by now.”

Given that support, possibly bolstered by increased understanding about the virus and its risks, it’s possible Americans might support more robust contact-tracing measures if they understand the process, Hunt said.

The poll spoke to that, as well.

While the poll revealed support for an app that allows people to share test results with public health officials, Americans appeared to have more concern about downloading an app that tracks who they came in contact with. Still, according to the poll, 45% of Americans said they would be willing to download an app to their phones that provides information to public health officials to track the spread of the virus.

Hunt speculated that might be because Americans appear to be showing more trust in public health officials than elected officials using partisan language during the outbreak. In recent polls, Dr. Anthony Fauci, the director of the National Institute of Allergy and Infectious Diseases, consistently ranks as a trusted public figure, he said. Governors who aren’t using strong partisan language are maintaining high approval rates, Hunt pointed out.

That could be because there is little disagreement over the best way to defeat the virus in the community.

“There’s not a lot of disagreement about how to deal with this crisis, it’s just a matter of how willing people are to engage with it and do it,” Hunt said. “So it’s not as if there are sort of two competing theories about how to eradicate the virus. … I think that that is one thing that’s helpful in terms of unifying Americans around these really blunt and substantial efforts.”