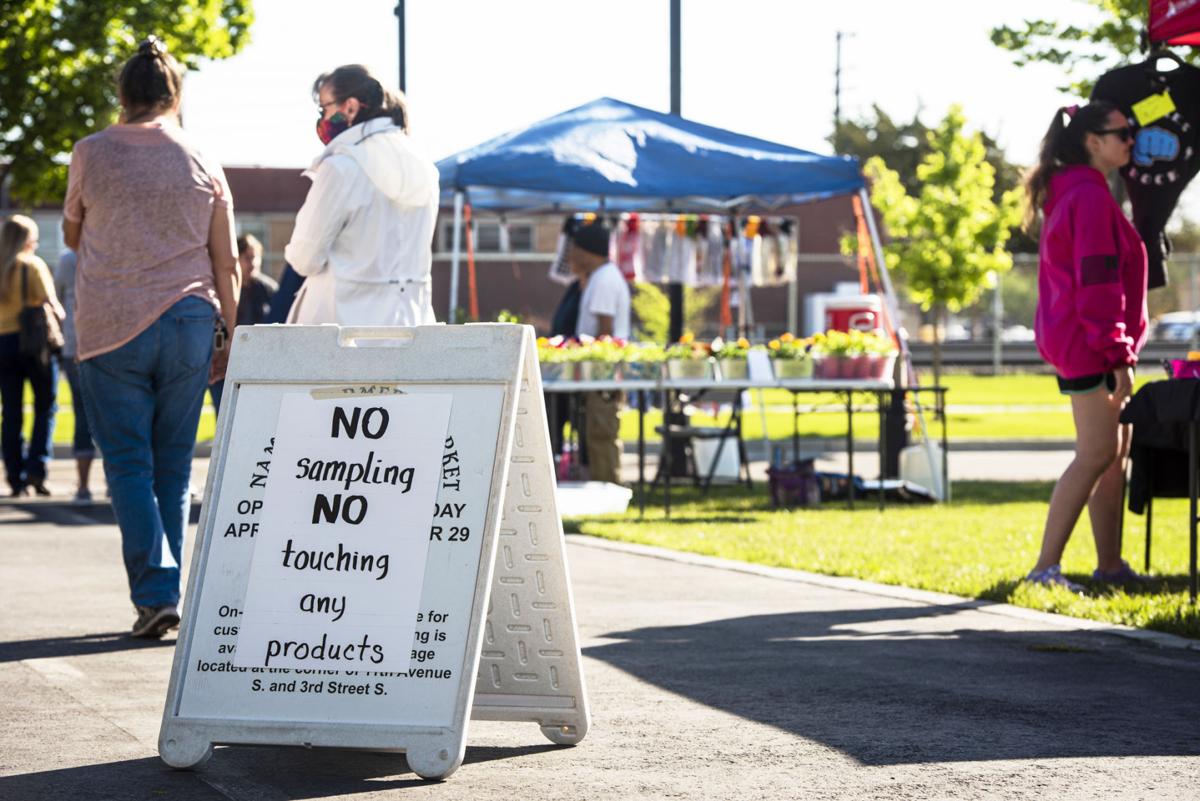 A sign at the Nampa Farmers Market advises customers not to sample or touch any of the products for sale on Saturday, May 9, 2020. Southwest District Health’s Board of Health has not issued a mask mandate in Canyon County or other in its jurisdiction, but will hear from medical professionals and discuss research about face coverings at its July 16 meeting. 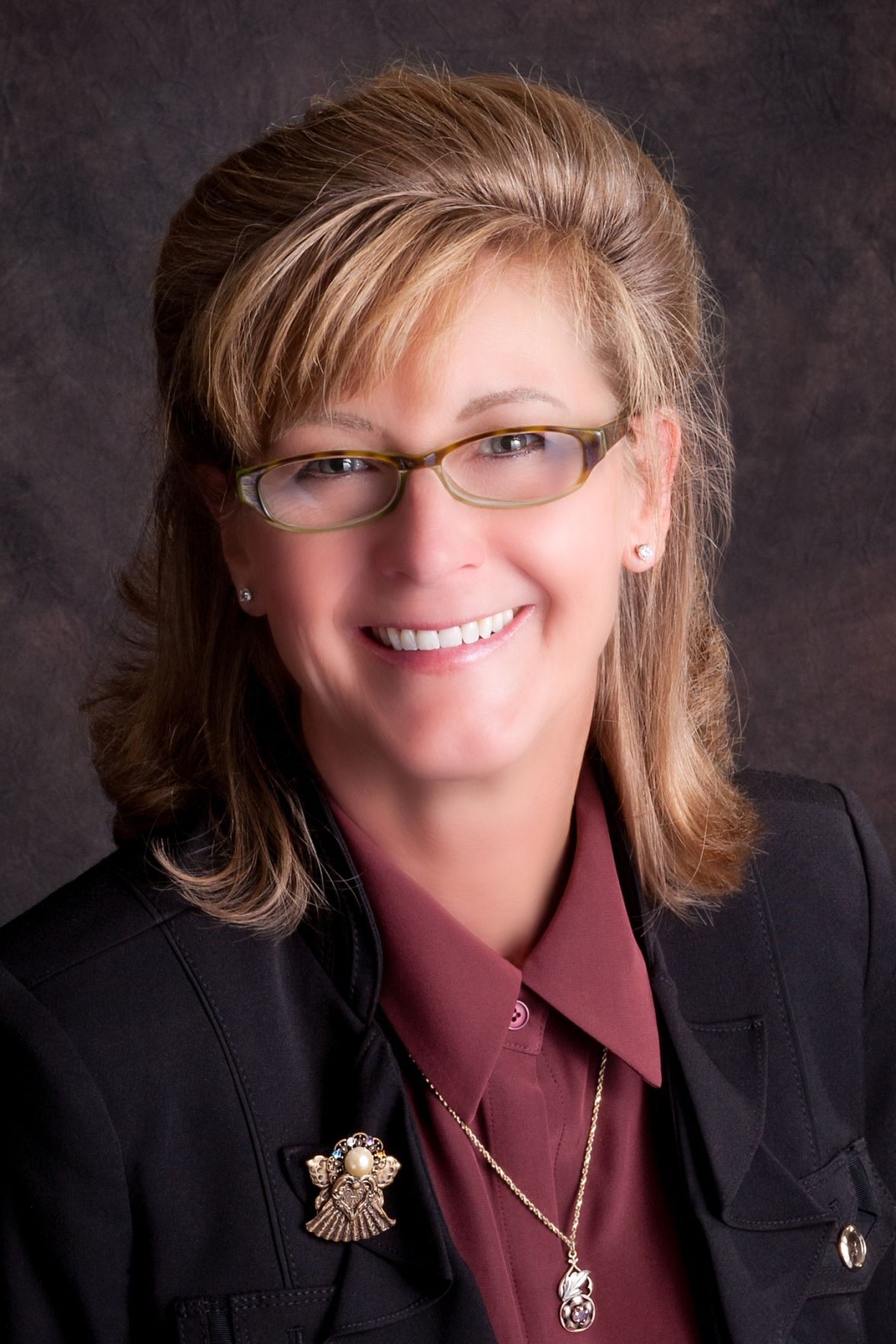 CALDWELL — As masks have become mandated in areas across Idaho, including in all of Ada County, many wonder if Canyon County will be next, considering its rising cases and related deaths, and proximity to Ada County.

The district’s Board of Health — which has the authority to make that decision per state law for Canyon, Washington, Adams, Gem, Owyhee and Payette counties — will hear from medical professionals and discuss research about face coverings at a special meeting at 8:30 a.m. Thursday.

One of the board’s members, Adams County Commissioner Viki Purdy, has been vocally critical of masks on social media.

Purdy wrote via Facebook on July 2, “Get ready to be nauseous! A mask was designed to keep bacteria from wounds, it is not designed to keep the particles of a virus from reaching out to you. Most masks are dirty and germ infested. Being touched by your hands 100’s of times a day. They all come from China, let that sink in. What is the goal? The virus is here and there is no escaping. There has never been a successful vaccine against a coronavirus. NEVER.”

Purdy did not respond to the Idaho Press’ request for comment via email as of 1:45 p.m. Wednesday. Her post garnered numerous reactions, including an editorial from the Idaho Statesman on Tuesday, which condemned her comments.

After it was published, Purdy again took to Facebook.

In her latest post, she wrote, “Thank you for printing more misinformation in today’s editorial section of your paper. It is obvious to me that you have done little or no research into the effectiveness of wearing masks. … I’m one of the few voices that the people of Idaho has speaking out when they find errors made by the decision makers that run our state. The people of this country and our state are entitled to make up their own minds about what is and is not good for them. They should not have decisions forced down their throats by uninformed politicians or reckless media formats. … I was elected to represent the people of my county and that is what I’m doing unlike many of our elected officials who feel they don’t want to rock the boat.”

In addition to Purdy’s posts, she also has shared several posts advocating against wearing face coverings — many of which have been flagged by Facebook for promoting false information.

Health care professionals, however, have united to call for a statewide mask mandate, and they urge the public to wear face coverings. Simply wearing masks can stop 85% of transmissions of COVID-19, Saint Alphonsus Chief Clinical Officer Dr. Steven Nemerson said during a Tuesday morning press conference held by the heads of several Idaho hospitals and medical groups.

Hours afterward, Central District Health’s Board of Health issued a mask mandate for Ada County. Gov. Brad Little’s office said he has no plans for a statewide mandate.

As part of Little’s four-stage Idaho Rebounds plan, local health districts and city officials were encouraged to decide whether more restrictive measures were needed in a specific community to slow the spread of COVID-19, rather than the state.

As seen in Boise, local officials can face heated backlash after issuing a mandate. Protesters against Boise Mayor Lauren McLean’s mask mandate earlier this month burned masks in front of city hall and demonstrated outside of the mayor’s house.

Idaho’s seven health districts are independent agencies that each have a board of health with representatives from each county in the district, appointed by county commissioners for a five-year term.

Idaho code also allows for the appointment of a physician representative to the board. The board then hires a director to oversee the day-to-day operations of the health district.

In addition to Purdy, the members of Southwest District Health’s Board of Health include:

Requests for comment via email also were not returned by Dale, Marvin, Hanigan, Elliot and Aberasturi as of 1:45 p.m. Wednesday.

The board last discussed a possible mask mandate during its July 7 meeting, and ultimately decided against it. As of 5 p.m. Tuesday, the health district reported 2,649 total confirmed cases, with a majority, 2,188, of those occurring in Canyon County, where several instances of community spread have been identified.

Following the last meeting, SWDH Director Nikki Zogg told KTVB on July 9 the board wasn’t planning on mandating anything at that point, but instead, it was asking residents “to do their part,” by wearing a mask and maintaining social distancing guidelines.

On Wednesday, the state’s website for coronavirus information listed 12,445 cases of COVID-19 in Idaho; that number includes 11,637 confirmed and 808 probable cases, which means those people were exposed to someone with a lab-confirmed case who showed the same symptoms, but who haven’t been tested.

The previous single-day record was 556 on Saturday.