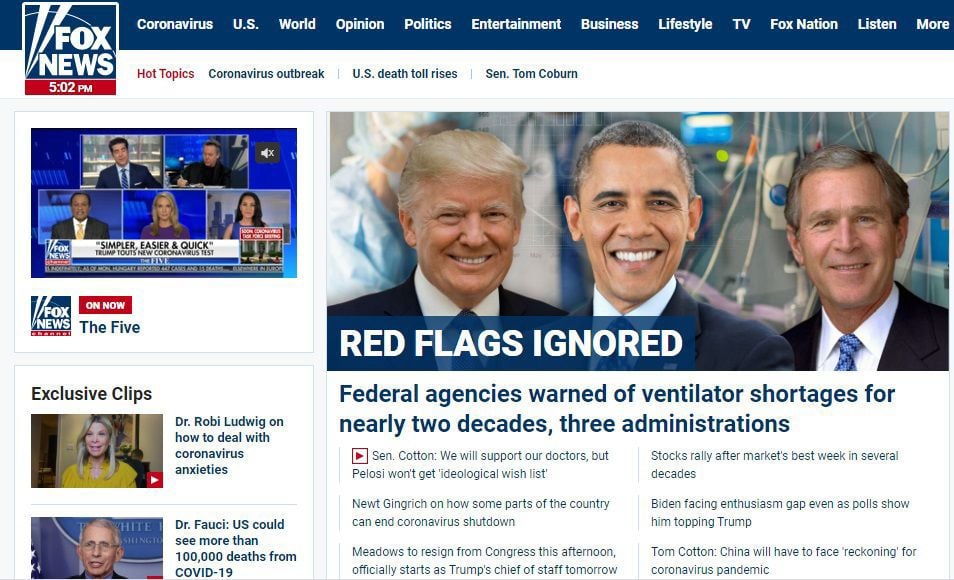 A screenshot of the Fox News website taken Monday afternoon.

A screenshot of the MSNBC website taken Monday afternoon.

A screenshot of the Breitbart website taken Monday afternoon.

A screenshot of the CNN website taken Monday afternoon.

A screenshot of the Fox News website taken Monday afternoon.

A screenshot of the MSNBC website taken Monday afternoon.

A screenshot of the Breitbart website taken Monday afternoon.

A screenshot of the CNN website taken Monday afternoon.

BOISE — The sheer amount of information and updates surrounding COVID-19 is at the least overwhelming, and at the most a cause of anxiety and fear.

How should someone who wants to stay informed approach the news, blogs and social media in the time of the coronavirus? And what should that coverage look like in the first place? The Idaho Press asked four experts to weigh in.

Professor Jevin West, the director of the Center for an Informed Public at the University of Washington in Seattle, has been stuck at home for the past month as COVID-19 upends daily life in the first U.S. city to be hit hard by the disease.

He’s remained upbeat, but noted that during major upheavals like this, disinformation is dangerous, and overloading on news and social media can be too.

“You have to be looking out for these opportunistic people out there trying to sell solutions or sell conspiracies,” West said. “So if it’s too good to be true, or too bad to be true and provokes an emotional response, you need to be careful.”

The Center for an Informed Public tracks the digital world’s responses to major events. On March 16, it had already counted 100 million tweets around the “coronavirus” hashtag.

“There are tons and tons of conspiracies out there,” West said, and they’ve proliferated because there is so much we don’t know about the virus. Those vacuums are where disinformation can flood in, as people try to cope with uncertainty.

“If experts aren’t going to fill them because they’re going a little slower and doing it properly, someone is going to fill them,” West said. “There are so many people that have become ‘epidemiologists’ recently.”

He suggests avoiding people such as the far-right radio host Alex Jones or “get rich quick” schemes that pop up from unknown sources.

“More than ever, you need to rely on gatekeepers and individual experts, and more than that, organizations,” West said about finding accurate information. “You should rely on those more than the people you might find on Facebook with the next idea.”

One of the best antidotes to this kind of fearmongering and false information is journalism, West said. Journalists are trained to look at information and verify it before they provide it to the public, running it through tests and constantly evaluating the sources of their information.

And at times like these, journalists have to rely on those institutions and experts too while adding nuance to their stories.

“People need to be aware, to put it in perspective, in context — not that the world is going to end or that there is nothing to worry about,” West said.

Steve Smith, a journalism professor at the University of Idaho in Moscow, said the press should be focusing on fact-based reporting, as always, but should moderate their coverage while still being consistent, thorough and timely.

“There is a public health, a mental health responsibility to not drown people with coverage of the virus,” Smith said about coverage. “I think there’s a danger in drowning people in virus information to the point where they just shut it off.”

Smith said the most important thing journalists can do is report on facts and rely on experts for context, not simply repeat what politicians say.

“What we’re reporting on is negative, it’s scary, it’s potentially devastating, and false hope is the job of politicians,” he said.

Dilshani Sarathchandra, a sociology professor at the University of Idaho, said much of what the media does is influencing “risk perception.”

Risk perception is how people subjectively assess risk, according to Sarathchandra, and it arises from factors including personal experience, familiarity with the risk, trust in information sources, a sense of control and social networks.

“The most fundamental way media alter public risk perception is by the volume and vividness of articles — for example, the higher the volume of coverage, the more likely we are to overestimate risk and vice versa,” Sarathchandra said in an email.

Sarathchandra says contextualizing facts and providing stories from people who have dealt with COVID-19 are some of the best ways for the media to help people understand the risks they might face during this prolonged epidemic. But that doesn’t mean people should be gorging themselves on news either.

“Fear and anxiety can sometimes lead to information aversion. In high and novel risk environments like the one we are experiencing currently, some people might be less likely to engage in information due to fear,” Sarathchandra said. But the media can help there too, by offering “actionable items,” things people can do to feel more empowered to protect themselves and their loved ones.

That doesn’t mean they should be locking themselves in a bunker to avoid the disease, but taking caution and acting “very conservatively” to avoid spreading the disease, Sarathchandra said. That can help reduce anxiety and make life more livable.

Jamie Derrick, an associate clinical professor in psychology at the University of Idaho, says the best way to deal with the problems of anxiety and uncertainty is to take “simple, wholesome, self-caring actions.

In an email exchange, Derrick explained some of the biological reasons why paying close attention to the avalanche of news can be bad for psyche and nervous system.

“Humans are evolutionarily wired to pay close attention to potential threats; This is a survival instinct. … The facts of this particular situation are inherently frightening,” Derrick said. “This combo means that reading media and listening to the news will agitate us — and the more we read, the more we will remain in states of anxiety and fear.”

Anxiety comes from worrying about what might happen in the future, and it’s a normal reaction in small doses, Derrick said. There are a number of ways to combat feeling anxious, such as exercising, taking a set of deep breaths, walking outdoors or other small actions that can have a big impact on our well-being.

“Try to read facts and steer away from opinion pieces,” Derrick said about media consumption.

Taking breaks from the news is an “essential” part of allowing the nervous system to reboot itself, Derrick said. And avoiding media and news hosts who provoke strong emotions is another way to keep from feeling a sense of anxiety or anger.

Again, Derrick said, taking breaks from the high-speed nature of the news cycle is a necessary part of responding to such a monumental crisis as the COVID-19 pandemic.