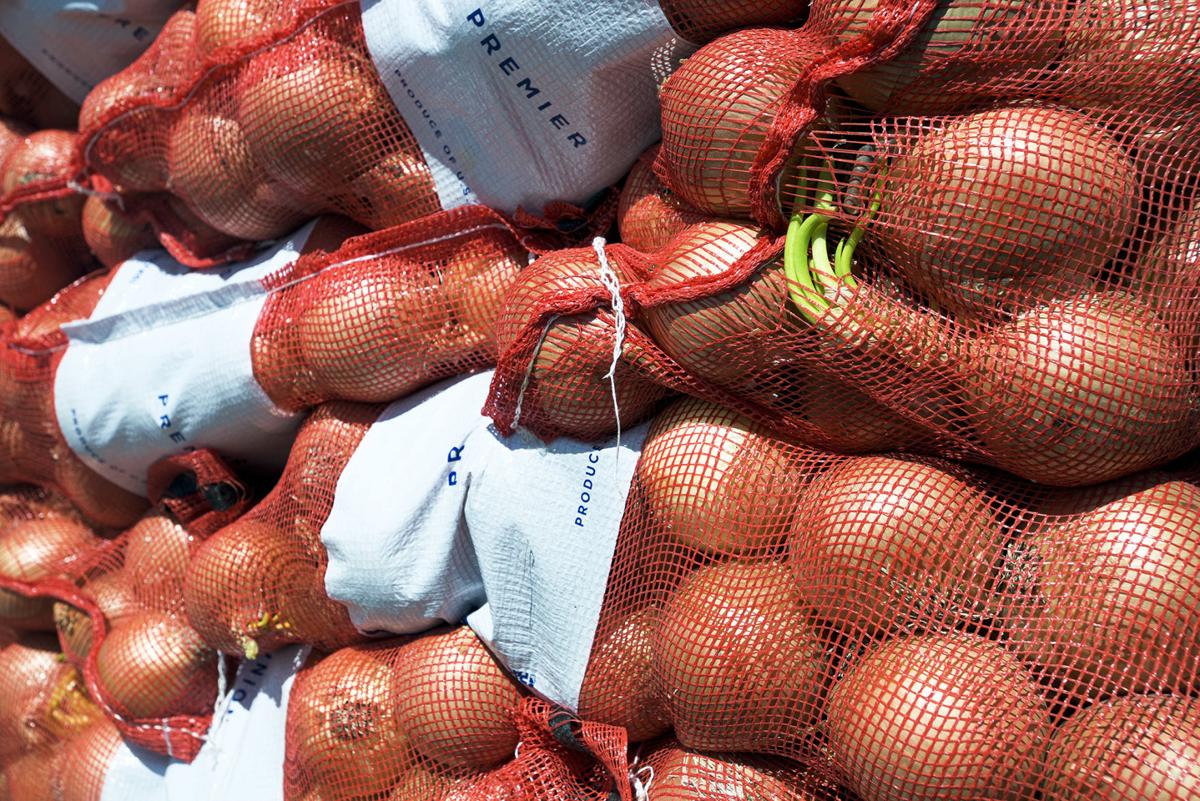 Over 100,000 pounds of surplus onions from a local farm in Parma have been donated to Oasis Food Center. Shown here, pallets of onions sit out for people to take home on April 14. 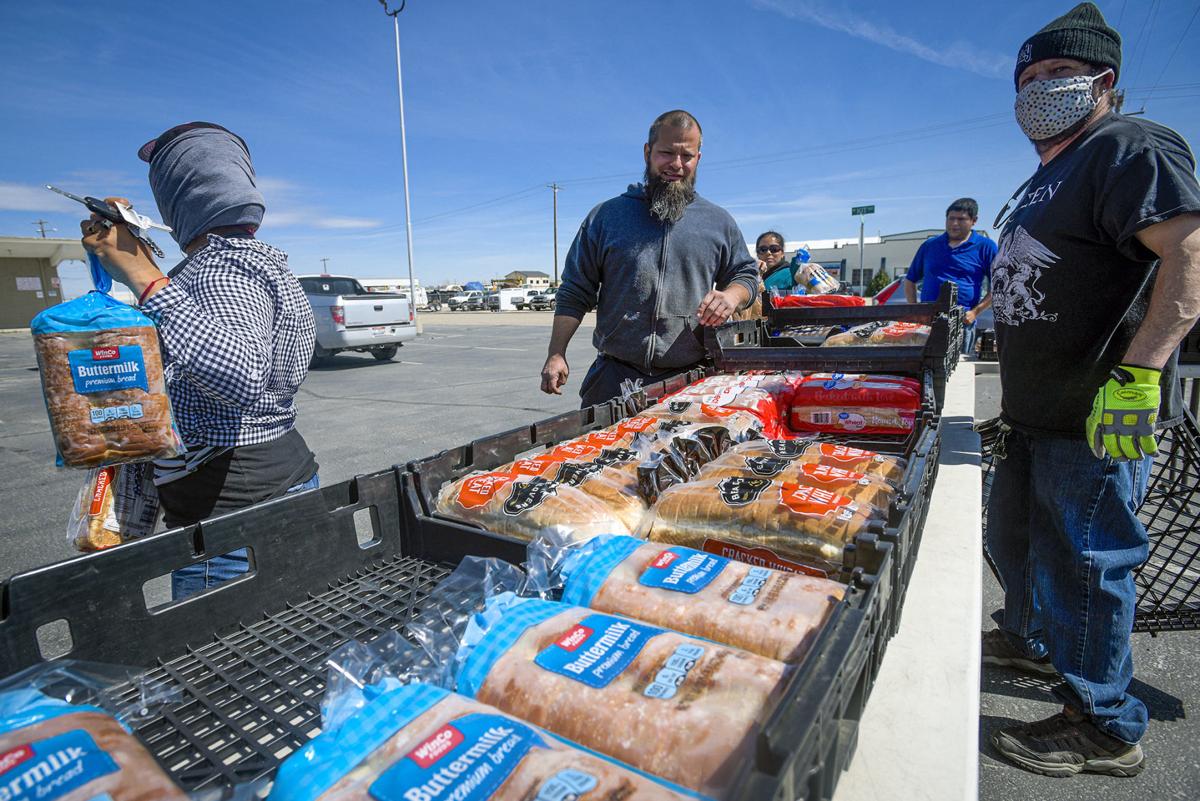 Over 100,000 pounds of surplus onions from a local farm in Parma have been donated to Oasis Food Center. Shown here, pallets of onions sit out for people to take home on April 14.

CALDWELL — Dozens of Caldwell residents lined up outside Oasis Food Bank on Tuesday to take their pick from the pallets of free onions donated by Obendorf Produce in Parma.

Lexi Oropeza, spokeswoman for Obendorf Produce, said they made the donation because their packing shed was closing for the season and they had extra onions “that there wasn’t a market for.” She said the donation was made because the onions have been hard to sell because of the new coronavirus outbreak, and because the market frequently fluctuates.

The Obendorf donation comes as farmers across the United States are trying to get rid of their produce and dairy, often donating to food banks and school districts.

General Manager of Owyhee Produce and onion grower Shay Myers said he has had to resort to plowing millions of pounds of onions back into his fields in Nyssa, Oregon, because they can’t be sold.

Myers said according to the U.S. Department of Agriculture, average daily consumption of onions nationwide is about 350 truck loads, or 14 million pounds a day. He said that number is down by about 150 truckloads, or 6 million pounds.

“The industry as a whole is disposing of or will have to dispose of 6 million pounds of onions a day,” Myers said.

Liang Lu, Ph.D., assistant professor of Applied Economics at the University of Idaho, said the most severe impact is on the supply chain for restaurants. With restaurants, schools and hotels all closed for the foreseeable future, farmers have lost a large percentage of their buyers.

Lu said according to the USDA, the markets for food service and retail, or grocery stores are about the same size.

“What we have is a disruption in the food service supply chain, that is why we are starting to see a lot of problems,” he said. “I don’t think the supply chain to supermarkets is disrupted.”

Lu said there is plenty of food for grocery stores, so people should not be worried about the empty shelves they may be seeing when grocery shopping.

The imagery is troubling though; people have been flooding to the grocery stores and stocking up on produce and other food items to avoid going out as frequently, but as consumers are purchasing more of certain types of pantry staples, local farmers are having to give away and destroy excess food.

Myers said part of the problem in the onion market is Americans eat differently when they are cooking at home, rather than eating at a restaurant.

“How many times have you made onion rings or had an onion bloom from cooking at home?” Myers said. “Probably zero.”

Lu said part of the issue farmers are struggling with is how difficult it is to redirect food that had been prepared for restaurants, into the retail market.

“The issue of redirecting a supply chain from restaurants to grocery stores is a costly one,” Lu said. “The additional cost to move them is more costly than the product itself. If all that milk can be redirected, there is a higher cost of those products, so would consumers be willing to pay a higher price for that repackaged milk and toilet paper?”

Lu said other items may be bulky, like eggs. Restaurants typically buy lots of eggs at a time, which without that market would have to be repackaged into a dozen or two dozen bundles for the grocery store.

“There are costs for repackaging,” he said. “There are also items that would need further processing. Like fish to a sushi restaurant; the restaurant cuts the fish and cooks it for you. No one would want to buy a 100-pound fish from a grocery store, and it would be hard for a supermarket to receive live lobster.”

Idaho’s dairy industry has been one of the hardest hit by the virus closures. Idaho ranks third in the country in dairy production, with most of the dairy leaving the state and the country.

Kristi Spence, spokesperson for Dairy West, an organization that represents dairy farmers in Idaho and Utah, said about 15% to 20% of Idaho’s dairy exports leave the country.

“The whole food supply chain has been impacted by the flux in demand, with food establishments and schools and the export market being impacted by the global nature of this crisis,” Spence said.

Some Idaho dairy farms started dumping excess milk in early April because of the loss of customers in the restaurant industry, the Post Register reported.

Myers, the Nyssa onion grower, said analysts he has spoken to estimate long-term ramifications following the closures of public places. He worries that restaurants will have to close permanently.

Farms such as Obendorf have been donating excess produce to food banks, but Myers said 6 million pounds of onions a day is too much for food banks. They often don’t have the type of storage needed for large amounts of fresh produce.

“People need to consider how important it is to them where their food comes from,” he said. “If it is important to them, we need people to voice their support for local agriculture.”