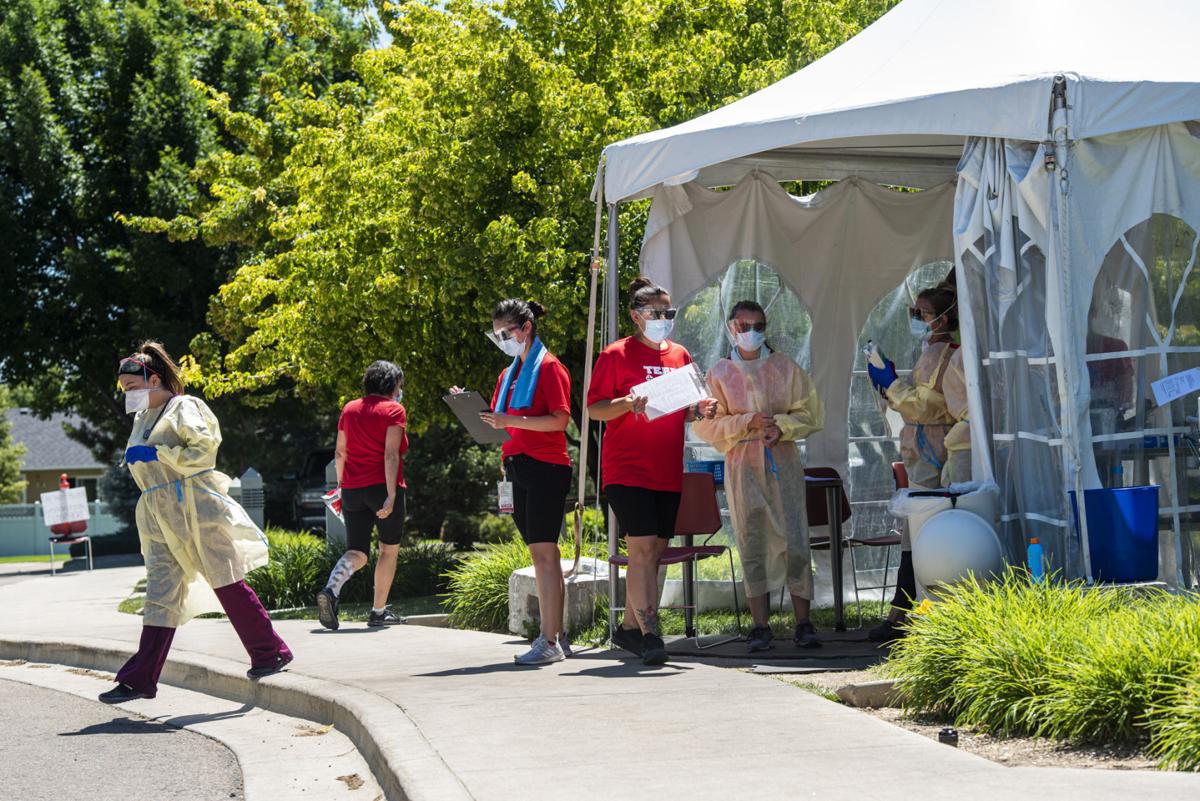 Staff at Saint Alphonsus Meridian Health Plaza use a tent as a home base outside the urgent care facility for administering tests for COVID-19 and other respiratory diseases on Wednesday, July 8, 2020 in Meridian. 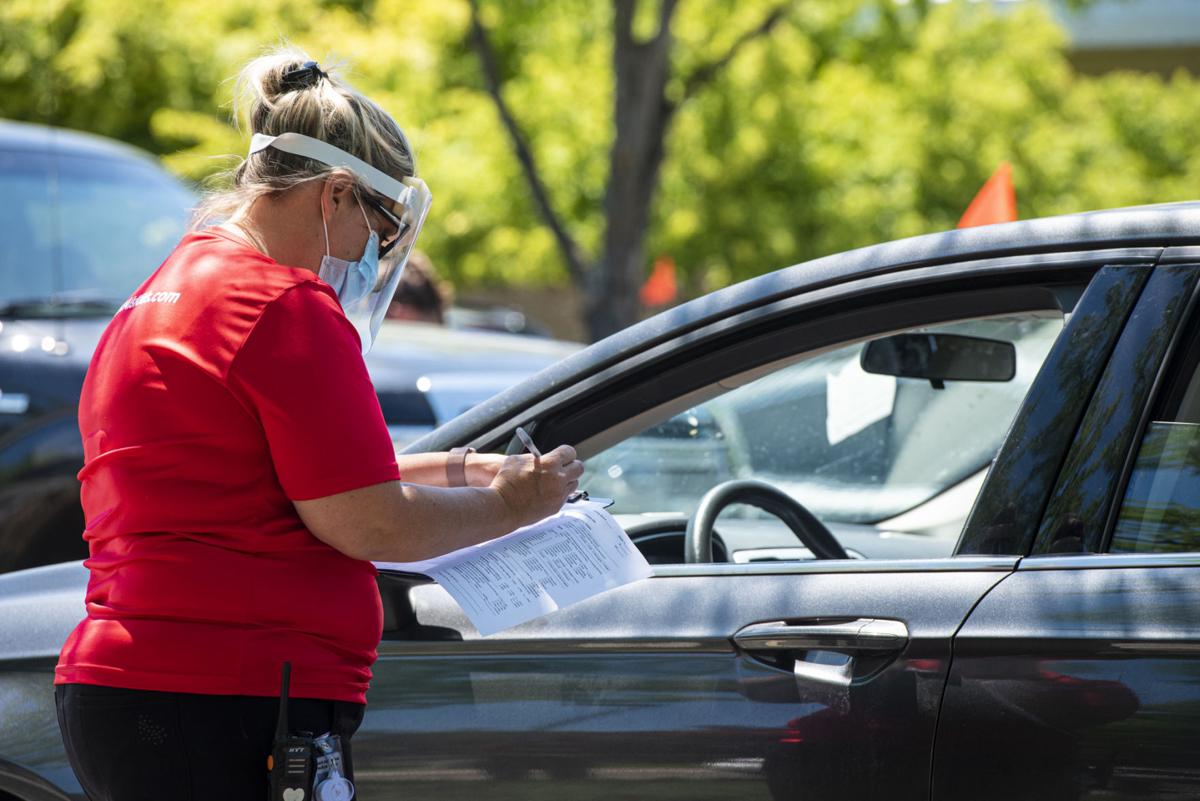 Staff at Saint Alphonsus Meridian Health Plaza use a tent as a home base outside the urgent care facility for administering tests for COVID-19 and other respiratory diseases on Wednesday, July 8, 2020 in Meridian.

BOISE — High positive testing rates, the challenge of getting children back to school and the continued threat of the novel coronavirus were on the agenda for a meeting of the Central District Health Board on Tuesday.

Dr. David Peterman, a pediatrician and CEO of Primary Health Medical Group, said the company’s clinics across Treasure Valley have seen a “consistently high 15% positivity rate,” which signals that not enough tests are being conducted.

“It’s accepted by epidemiologists and epidemic specialists that an epidemic is under control when the rate is 5% or less. If it’s greater than 10%, then you’re not testing enough,” Peterman told the CDH Board of Health during Tuesday’s online meeting.

Of the 16,821 tests performed during the week of July 5-11, Idaho had a positive testing rate of 14.5%. This is the most recent week for which data is available.

Peterman estimates that between 5-7% of the population in the Treasure Valley either has or has had COVID-19, and called the last month’s spike in COVID-19 cases an “unbelievable surge.” Canyon County has a 19% positive COVID-19 testing rate, Peterman said, an extraordinarily high number.

“St. Al’s and St. Luke’s demand for testing has been described as overwhelming,” Peterman said.

St. Luke’s has 235 employees who are not working because of COVID-19-related illness, he said. Peterman also described a laboratory testing system that was unable to stay above water as well, with testing results taking almost two weeks to come back from some national labs.

And getting people to take the virus seriously has been a complicated and difficult process as well, Peterman said.

“Short of me getting a truck of loudspeakers and driving around and renting billboards, it’s an enormous problem,” Peterman told board member and Valley County Commissioner Elting Hasbrouck, who was concerned people in his county were not taking COVID-19, the disease caused by the new coronavirus, seriously.

Peterman said COVID-19 can cause longterm health problems and death in other age groups, not just the elderly. He added that schools coming back into session would make transmission of the disease even easier.

“There are three things I’m worried about,” Peterman said about children returning to school. “One is that there will be kids that get ill and there are some who will be hospitalized. Two, is that kids will be index cases and they will spread it, and then three is, I believe there are some teachers who will be too frightened to come to schools.”

If teachers become infected, Peterman said, schools run the risk of a similar problem as Primary Health did with one of its clinics: not having enough personnel to stay open.

“The reason I feel so strongly schools should not open until we get the positivity rate down to 5% is, without that … as you get into fall, November, December, there’s no way to manage this,” Peterman said.

There are more issues involved than simply the positive test rate, as Peterman and the Central District Health Board acknowledged. Schools are often safe havens for children who are food-insecure or are suffering from abuse at home, Ada County Commissioner Diana Lachiondo said, and that makes the decision to open them even more fraught.

The Central District Health Board will be adding education experts to discuss the potential best practices for reopening schools as the first days of school rapidly approach. Questions about how the disease will continue to circulate throughout the county and what metrics should be used to end the mask mandate remain.

Rep. Megan Blanksma, R-Hammett, a board member, asked how Central District Health would determine when to lift the mask orders.

“There is a great deal of uncertainty going on again,” Blanksma told the board. Blanksma critiqued the board’s communication efforts and the lack of specific data benchmarks that would tell residents when the mask order could be lifted, saying people were struggling to see why the order was necessary. Ada County, per the health district’s order, is also in Stage 3 of reopening while the rest of the state is at Stage 4.

“We’re not providing clear targets for when these mandates are lifted,” Blanksma said, and that was hurting businesses in the Central District. “Businesses are at stake … I understand we have serious health concerns, but I’m concerned we’re not looking at those levels.”

Board members said they would look at the specifics of the data required to meet Blanksma’s request in the future; Lachiondo said she was concerned about the surrounding areas’ attempts to curb the virus.

“If they’re not taking any mitigation efforts … we wouldn’t get to where we need to, and that’s fraught and unfair for our local businesses,” Lachiondo said about Central District Health adding more restrictive measures.