We've recently updated our online systems. If you can't login please try resetting your password. You must login with an email address. If you don't have an email associated with your account email circulation@idahopress.com for help creating one.
Support local journalism

With demand outpacing supply, Idaho health officials are bulking up vaccine administration efforts in hopes of quickly getting COVID-19 shots into people’s arms.

Gov. Brad Little announced Tuesday that he is seeking to deploy 150 more Idaho National Guard personnel to help with vaccine administration, which would raise the total number of troops helping with Idaho’s pandemic response from 250 to 400. Little also said the state will give grant money to vaccine providers that seek to hire more staff, buy more equipment or target vaccine access for hard-to-reach populations.

“Our problem right now is demand far exceeds supply. There are many, many, many hundreds of thousands of people that are anxious to get vaccinated,” state health Director Dave Jeppesen told reporters during a conference call on Tuesday. “And there’s been no disruption in that demand. … Our struggle has been on the supply side.”

The push to speed up vaccinations in the Gem State comes while states prepare to transition from dealing with the at-times shifting directions from the Trump administration to president-elect Joe Biden’s administration, whose plans haven’t been seen in action.

Idaho Public Health Administrator Elke Shaw-Tulloch said members of the incoming administration, which will take control of the White House on Wednesday, “told us at the end of last week we might not have the full picture of the details of their plans for a couple weeks.”

During the media briefing, state officials also offered contradicting explanations about the impact of news last week that the Trump administration had already been giving states all available vaccine doses, even when the federal government said it was holding a large supply of second doses to give to states later on.

One Idaho official, state immunization lead Sarah Leeds, called reporting on the issue, done by national news outlets such as the Associated Press and the Washington Post, “rumors” during the call.

Shaw-Tulloch said Idaho’s vaccine timeline had not been affected by news last week that the Trump administration had already been giving states both vaccine doses at once, even when it said it was reserving second doses for later on. The news led to confusion and frustration in some governors, who had tweaked their vaccine plans last week after Trump administration officials told them they would halt the previous federal policy of reserving second doses, according to the Associated Press.

“We had already been told our estimated allocation to the state of Idaho” for that week, Shaw-Tulloch said. “And fortunately, we didn’t quickly pivot and change all our plans to account for something.”

The Idaho Department of Health and Welfare said Friday, after news about the vaccine reserve’s depletion, it expects to receive about 20,950 virus vaccine doses each week. The estimate is about 1,000 doses more than previous estimates.

Later, Leeds disputed reporting on the vaccine reserve depletion, citing a national immunization association leader and liaison to Operation Warp Speed, and a CDC project officer for Idaho; Leeds did not say their names.

“The news headlines appear to be rumors, and I don’t know where they were stoked, but they appear to be rumors, because the federal government is assuring that there are second doses. For every allocation that we get weekly, they have reserved … that second dose so that our providers don’t need to ration those doses,” Leeds said.

Currently, Idaho is vaccinating both its top priority group — health care workers and long-term care facility residents — along with teachers, law enforcement and prison staff, who the state has deemed front-line essential workers to receive shots in the beginning of the second priority group.

“We continue to ask for not only additional doses, knowing that we have a lot of providers ready and anxious to administer doses here in Idaho,” Leeds said. “But we also continue to ask for, even if it is to remain just about 20,000 doses, if they could let us know several weeks in advance so that our providers can have better planning.”

While pushing for faster vaccine administration, Idaho officials delayed the rollout of an online tool they had hoped to unveil Monday where people could sign up to be notified when the vaccine became eligible in their priority group. Shaw-Tulloch said the state wanted to hammer out some issues with how the site functioned, and that “our hope is to have it (by) the end of this month.”

In eastern and southeastern Idaho public health districts, which each provide health services to eight counties in the rural eastern half of the state, officials have online forms where residents can register to be notified when vaccines are available to people in their priority group.

To date, more than 69,000 doses have been administered in Idaho. So far, more than 160,000 vaccine doses have come to the state, Shaw-Tulloch said. 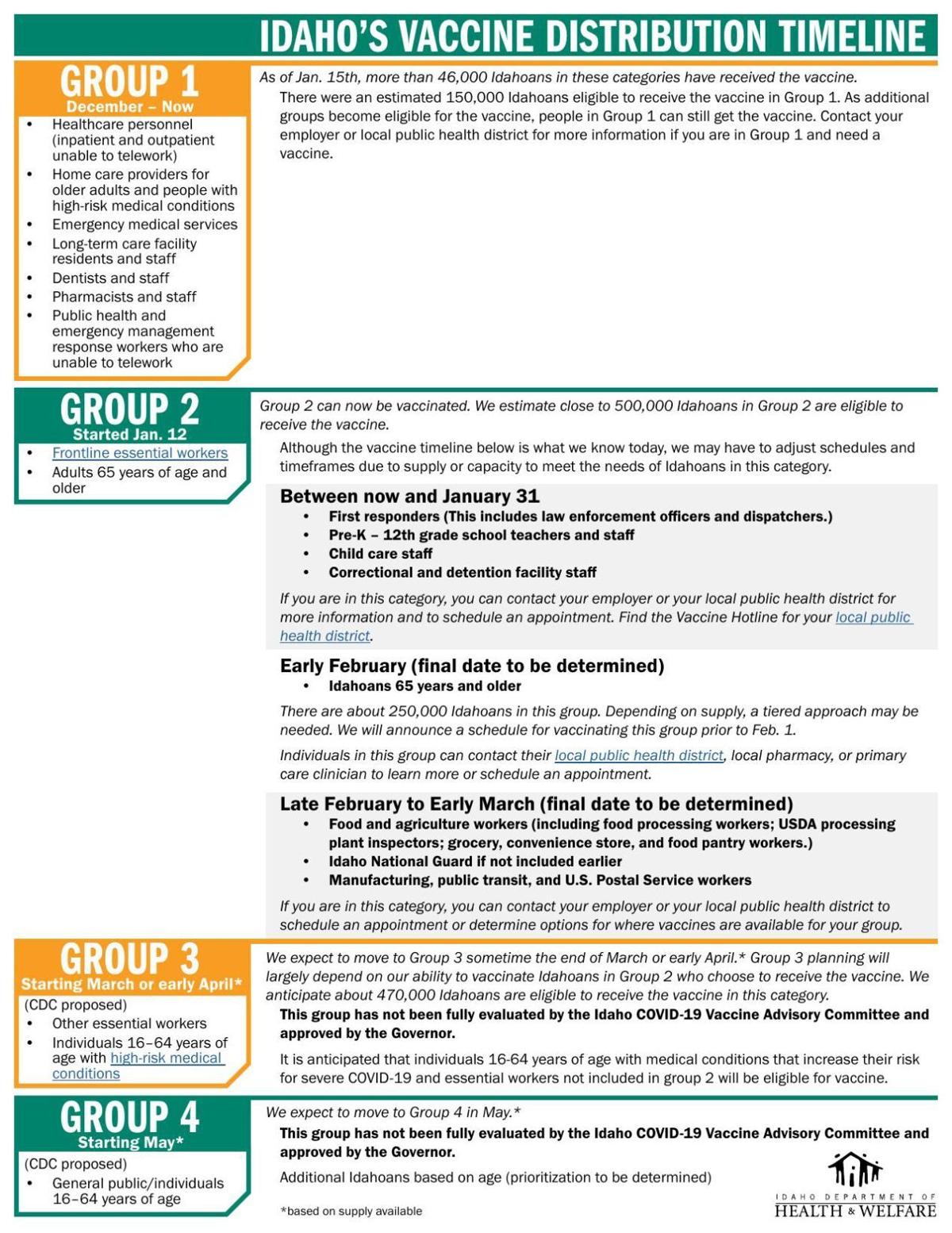