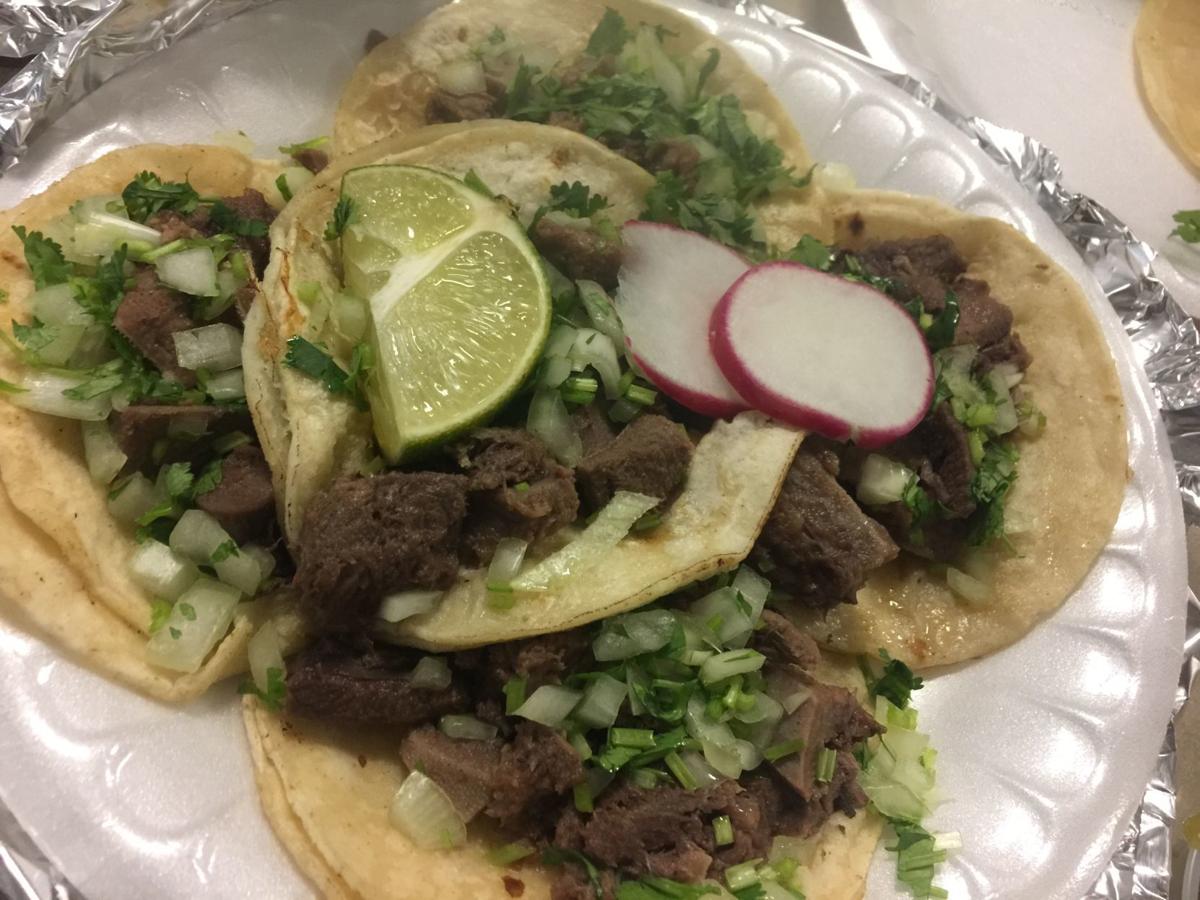 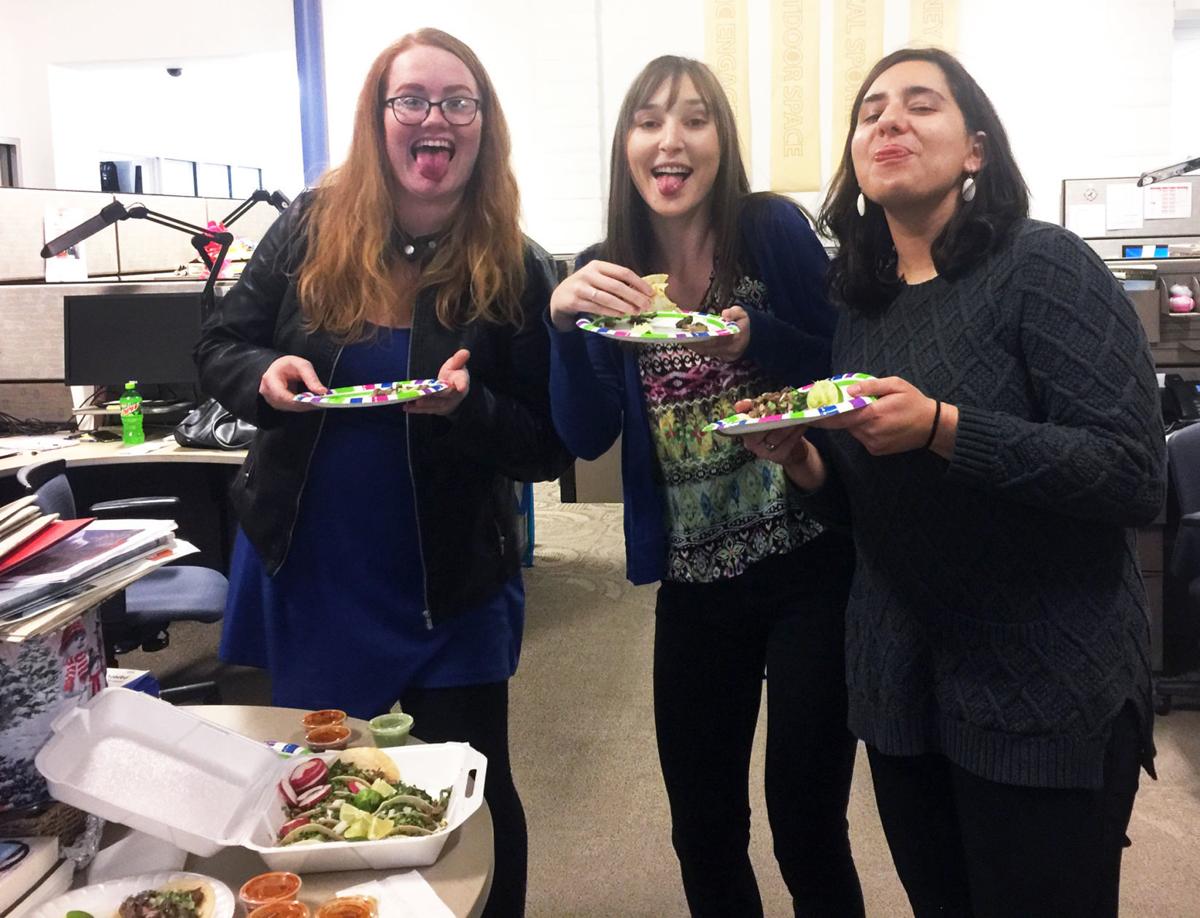 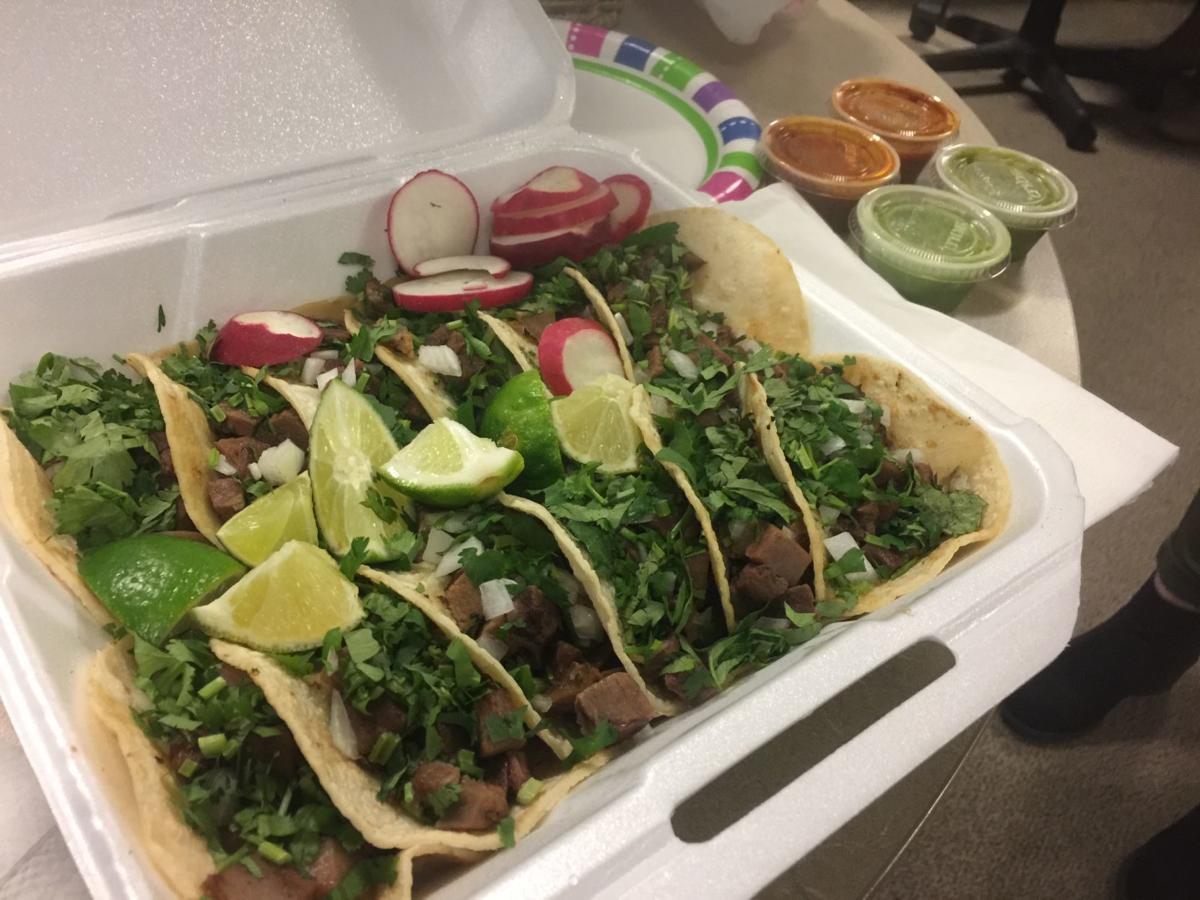 I had some trepidation about this week’s tacos. Reporter Nicole Foy and I had discussed moving into the, what I call, more exotic taco filling realm. For many authentic street taco purveyors as well as regular customers, fillings such as tripas (intestines), sesos (brains), cabeza (mixed face meat), de buche (pork stomach), tromp (beef lips) and lengua (beef tongue) are de rigueur. I gamely agreed and jumped at her suggestion of lengua — better than brains, I thought.

Plus, there are all sorts of tongue-in-cheek witticisms that come with trying the tongue. I am hoping my colleagues will be doing their fair share of tongue wagging about it, wouldn’t want them do go all tongue-tied. And they better spill the beans forthwith — no cat-got-your-tongue around here. Good luck to my formidable opponent, Nicole — one slip of the tongue and it could be all over.

Taco trials, take seven: Jeanne vs. Nicole. This week’s filling: lengua. We each brought trays of tacos into the newsroom for a blind taste-test with one caveat: “If you try, you must reply.”

The setup/Jeanne: Campos Market is a market, butcher shop, meat market or carniceria, and in the back, there is a taco counter and a few tables for eating. The market has been a staple of the neighborhood for 14 years.

The setup/Nicole: There’s always a long line when I drive by Aguililla Taco Truck. I’ve tried some of their other tacos before, but their tacos de lengua are my favorite.

Jeanne Huff: This is hard for me to say ... but I didn’t really like the lengua tacos. I am positive it is just a texture thing and just my own deal, because I have talked to a lot of taco lovers that wax poetic about the lengua taco as their favorite kind of taco.

That said, the meat in both was rather chewy and a bit gristly. Nicole’s tacos had the larger chunks of lengua and there was more of an onion flavor, which was good. The tacos I brought in had meat that was more like diced pieces and there was more cilantro. I used all the sauce possibilities I could, and the sauces from both places were snappy. I would give both of these tacos a tie.

Nicole Foy, Canyon County and Hispanic affairs reporter: My mother and grandmother passed on several traditional recipes, but never anything involving lengua. My mom hates it. Because lengua was fairly cheap, my grandma would try to sneak it into the food she made my mom and uncle. There would always be a moment, my mom says, when either she or her brother would discover a taste bud and immediately abandon dinner.

With that story forever in my psyche, I’ve never eaten lengua. Now, after years of friends threatening to “take away my Latino card” for its omission from my palate, I can say I’ve made a horrible mistake.

If you’ve never tried lengua, it tastes like the kind of meat that goes into beef stew: tender and incredibly flavorful. My mom is also far too dramatic; you really can’t see any taste buds (at least in the tacos from Campos Market Boise and Aguililla Taco Truck). I honestly couldn’t choose between my tacos and Jeanne’s tacos — I was too excited by how good it all tasted.

Holly Beech, assistant editor: I was a bit nervous about this week’s Taco Trials, having never tried lengua before. It reminded me of the first time I tried sushi. After removing a couple pieces of meat that had visible taste buds on them, I tentatively bit into the taco, not sure what taste or texture to expect. Had I not known it was tongue meat, I wouldn’t have thought much of it and would have just assumed they were beef tacos. The meat was tender and had a good flavor. The taco seemed a bit greasier than others we’ve tried. I’m glad I tried something new, and I enjoyed the lengua tacos. However, this order won’t rise to the top of this list for me next time I get tacos.

For the past several weeks, my co-workers have been teasing me about possibly doing a round of taco trials where the staff tries beef tongue tacos. I was pretty much the only person who was excited about this — I can’t imagine why — but I’m an adventurous eater, I suppose. Either way, I was not disappointed.

Both tacos we tried were probably some of my favorites we’ve ever featured in the taco trials. The meat was tender and flavorful at both places, so it was a pretty close call for me. In the end, I’d say my favorite were the tacos from Nicole’s place, just because there was more flavor to them. The meat also came in bigger chunks, which I liked because it made the experience more satisfying. I’d likely go back to both of these spots, though.

Emily Lowe, Nampa public safety reporter: As previously having lengua before and never having liked it, I wasn’t too optimistic that I would actually enjoy the taco trials this time. But being a person who can never turn down food, I had to try it. To my surprise, I actually enjoyed them.

Nicole’s pick had the more tender tongue and I preferred the flavor over Jeanne’s pick. Meat aside, I enjoyed the amount of toppings on Jeanne’s pick better. Both tacos were yummy and different and I’m glad that I gave lengua another chance. I’d definitely eat it again.

Brian Myrick, photo editor: The tacos today were something new for me. Beef tongue. I’m generally a picky eater and don’t try lots of new things, but found the tacos from both locations to be interesting. The meat was very tender and flavorful. Although tender, both seemed to be fatty, almost greasy in texture; the ones Nicole provided being even more so. But, a splash of green salsa on both seemed to even things out a bit. Overall, not bad for a new experience, but I can’t say that I’m a fan. I would, however, return to both vendors, but perhaps for something else on their menu.

Patty Bowen, Meridian Press reporter: I apologize if this review is a little tongue-in-cheek.

This was my first time having cow tongue, but the taste was surprisingly good. I see now why “lengua” means both language and tongue in Spanish because these tongue tacos really spoke to me.

I was a big fan of how both tacos tasted. Nicole’s tacos had a delicious flavor that was tender and moist. Jeanne’s tacos were a bit more chewy, but the fresh onions and radishes made the otherwise kind of greasy tongue meat of both tacos taste perfect.

Ultimately, I’d say Nicole’s tacos were a bit more up my alley, but if you like your meat really tender, Jeanne’s might be perfect for you.

So, there you have it. Another Taco Trials come and gone.

Oh, yeah, you might want to mosey on over to our website and check out our new Taco Trials page, complete with a map — it’s got all the places we’ve sampled so far, so it’ll make your own Taco Trials tripping a little bit easier! Just go to idahopress.com and click on Taco Trials in the Community section.

Taco Trials is an ongoing series devoted to truth and tacos. Concocted by Canyon County and Hispanic affairs reporter Nicole Foy and community engagement editor Jeanne Huff, Taco Trials pits tacos head-to-head in a blind taste trial. Idaho Press reporters, photographers and editors take the noshing seriously and report on their judgements. Readers, send us your comments — each candidate’s location is listed — or send us your favorite spot and we’ll put it on our list.