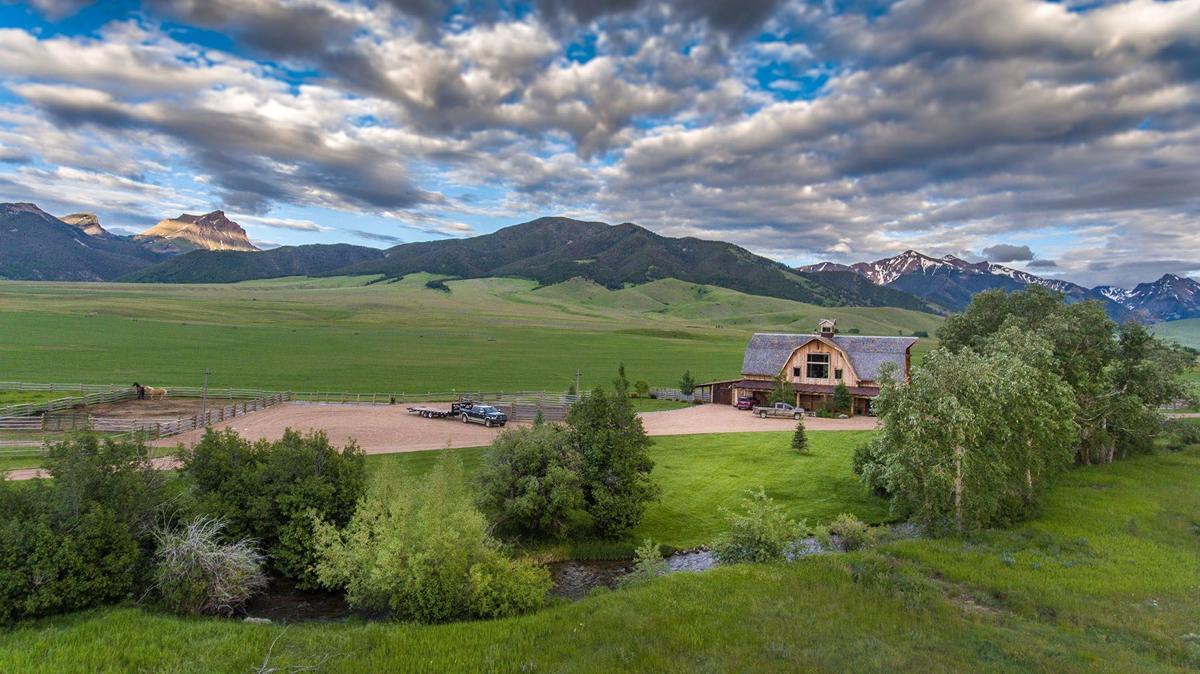 Ranch land sales are booming in Montana this year despite, or maybe because of, the novel coronavirus. This property in the Madison Valley sold in September. It was listed for $12.7 million. 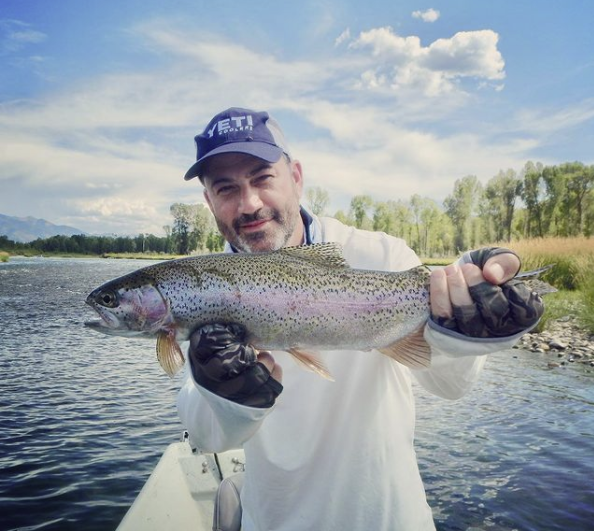 Late-night TV host Jimmy Kimmel posted this photo of an 18-inch rainbow he caught on the South Fork of the Snake River on Aug. 31, 2019. Kimmel recently purchased the South Fork Lodge in Swan Valley with celebrity fishing guide Oliver White.

Ranch land sales are booming in Montana this year despite, or maybe because of, the novel coronavirus. This property in the Madison Valley sold in September. It was listed for $12.7 million.

Late-night TV host Jimmy Kimmel posted this photo of an 18-inch rainbow he caught on the South Fork of the Snake River on Aug. 31, 2019. Kimmel recently purchased the South Fork Lodge in Swan Valley with celebrity fishing guide Oliver White.

Although the novel coronavirus has been the death of some businesses, it appears Montana ranch sales are cruising along at a heated pace.

“It’s the craziest year I’ve ever seen,” said Jim Taylor, director and real estate partner at Hall and Hall. “People just want to get out of wherever the hell they are.”

A 50-year veteran of ranch sales, Taylor said because the rate of return from buying a ranch is low, it isn’t always a compelling investment when there are other alternatives. But, right now he is working with buyers who are seeing fewer stable alternatives.

“People look at them as an investment even though the ranching business isn’t good,” he said.

In his 33 years in the business, Bozeman ranch broker Jeff Shouse, of Live Water Properties, said he’s never seen anything like this summer’s aggressive buying.

“By the first of July we had exceeded our whole production compared to the year prior,” he said, despite a quiet spring.

Those loans don’t reflect big buyers who are paying cash, Taylor pointed out.

Buyers with deeper pockets are needed as land prices continue to rise and the amount of land for sale shrinks.

Shouse’s niche has been recreation properties in the $2.5 million to $3 million range. This year those prices have doubled.

“The sub-$5 million properties are gone,” he said. “Everyone I know has multiple buyers looking.”

The buying binge isn’t isolated to Montana, he added. His fellow brokers in Wyoming, Colorado, Idaho and Washington are seeing the same high demand.

“I had three deals for full price sight unseen, contingent on them looking at them,” he said.

Some buyers haven’t even been to Montana, Shouse said, noting they learned about the state’s beauty by watching the television show “Yellowstone,” about a ranching family starring actor Kevin Costner.

Inflated prices aren’t isolated to Montana ranch properties. According to the Bozeman Daily Chronicle, the median price of a home in August was $584,000 in the college town, up by more than $100,000 from a year earlier. Shouse said when he started in real estate in 1987, homes in the town’s university district were selling for $65,000. The same places now are valued at more than $1 million.

Andy Rahn of Montana Land Source, a website tracking land listings and sales in the state, said he’s not seeing sales higher than last year yet, but that could change as volume has increased in the last two months. He also noted there are fewer properties on the market this year, which surprised him. He speculated that may be due to the fact that sellers are worried they won’t be able to find another home or may be rethinking leaving their Montana refuge when there’s a pandemic.

There may be several factors driving buyers to more rural areas, Rahn said. Some have the “get me out of here kind of mentality,” he said, which may be propelled by masking and social distancing mandates to disagreements with their home state’s politics or fear of social unrest. Gun sales, after all, are booming.

Fay Ranches’ website also theorized that some families see rural areas as safer from COVID-19 if it sticks around. Plus, the reasons they enjoy urban areas — museums, concerts, restaurants — now seem less safe or even unattractive. Outdoor activities are more appealing for those seeking to avoid being infected by the novel coronavirus. Fay Ranches foresees the shift continuing for a few more years.

Shouse is unsure. He said some buyers had planned to buy property in the future but were urged to action by the pandemic. He’s uncertain how long the aggressive buying will continue. The first brutal winter may send East Coast and California transplants south, he said.

Those who decide to stay may now have the ability to work from home with greater ease, or with greater societal acceptance, making it less important that they’re in the office — the so-called Zoom boom. Taylor said he’s seeing that scenario play out even with the executives he works with. They used to be willing to hop in a jet or airplane to conduct a business meeting, but are now more comfortable with using a computer to Skype or Zoom.

“That whole world is definitely changing,” Taylor said. “Now they can spend more time on their ranches.”

The long-whispered-about purchase of the South Fork Lodge in Swan Valley was completed this summer.

The purchase price could not be determined but the 25.83-acre property was listed for $7.95 million.

“The renovated lodge will incorporate fishing art and books from Kimmel’s personal collection when it opens next spring for the 2021 season,” the article said.

Guests at the property can stay in “cabins, deluxe lodge suites or a secluded 4-bedroom home,” according to its website.

Kimmel is an avid fly-fisherman known to frequent rivers and streams in the Intermountain West. In a 2012 Q&A with Vanity Fair, he said that when he wants to get away from it all he goes “Fly-fishing in Montana, Idaho, or anywhere trout are hungry.”

A 2016 article on robbreport.com said, “Kimmel caught the fly-fishing bug nine years ago, when the musician Huey Lewis invited him to his home on the Bitterroot River.”

White, while not Hollywood famous, is a celebrity in his own right and is well-known in the fly-fishing world. Prior to joining with Kimmel on the South Fork Lodge venture, he was already a partner in two fishing lodges — Abaco Lodge and Bair’s Lodge — in the Bahamas.

A June 2016 article in Men’s Journal by Paul Kvinta had this to say about White, “In addition to global guiding, he co-owns two successful fly-fishing lodges in the Bahamas, both of which served as the setting for a television series about celebrities who fish, such as Jimmy Kimmel, Michael Keaton, and Tom Brokaw. His commercial sponsorships include Costa sunglasses and Yeti coolers. He writes a monthly column about his far-flung exploits for Fly Fisherman magazine, exploits that have also been documented in films and TV shows. People in the industry told me that White, 36, is fast emerging as fly-fishing’s preeminent personality.”

The original South Fork Lodge, about a mile downriver from the current site, was built in the 1930s, according to a 1998 Post Register article. Buell Warner bought the lodge in 1949 and ran it with his wife Dora for more than three decades before their son Spence took it over.

In the early 1970s, Spence Warner and one other fishing guide handled 20 trips per season, according to previous Post Register reports. Twenty years later Warner’s operation was booking more than more than 750 trips a season and had gone from two guides to eight full-time, and 12 part-time, guides.

In 1998, Warner sold the property to Mark Rockefeller, of Tarrytown, N.Y., youngest son of the late Nelson Rockefeller. Since 2013 the lodge had been managed by Natural Retreats, a luxury travel company operating in the U.S., United Kingdom and Ireland.