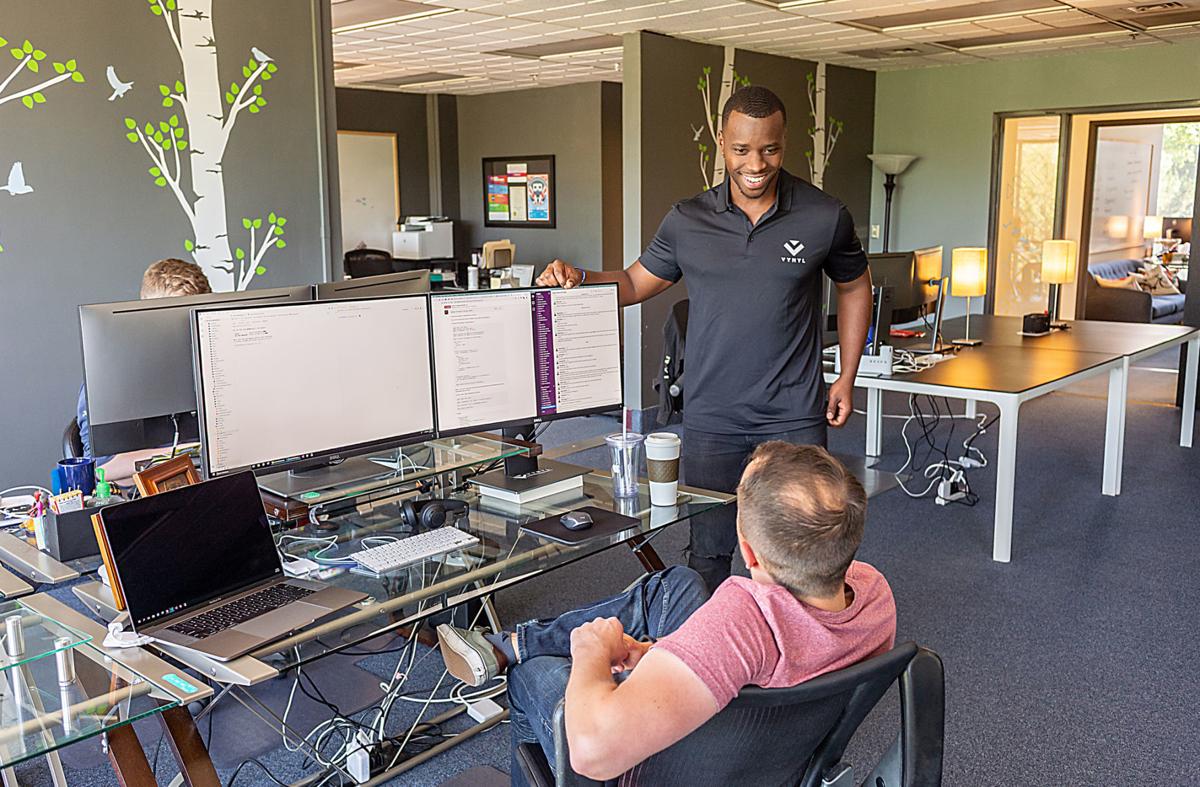 Software developer Yamin Hakizimana interacts with his co-workers at Vynyl. He was hired by the company after completing a Coding Dojo bootcamp class at Trailhead. 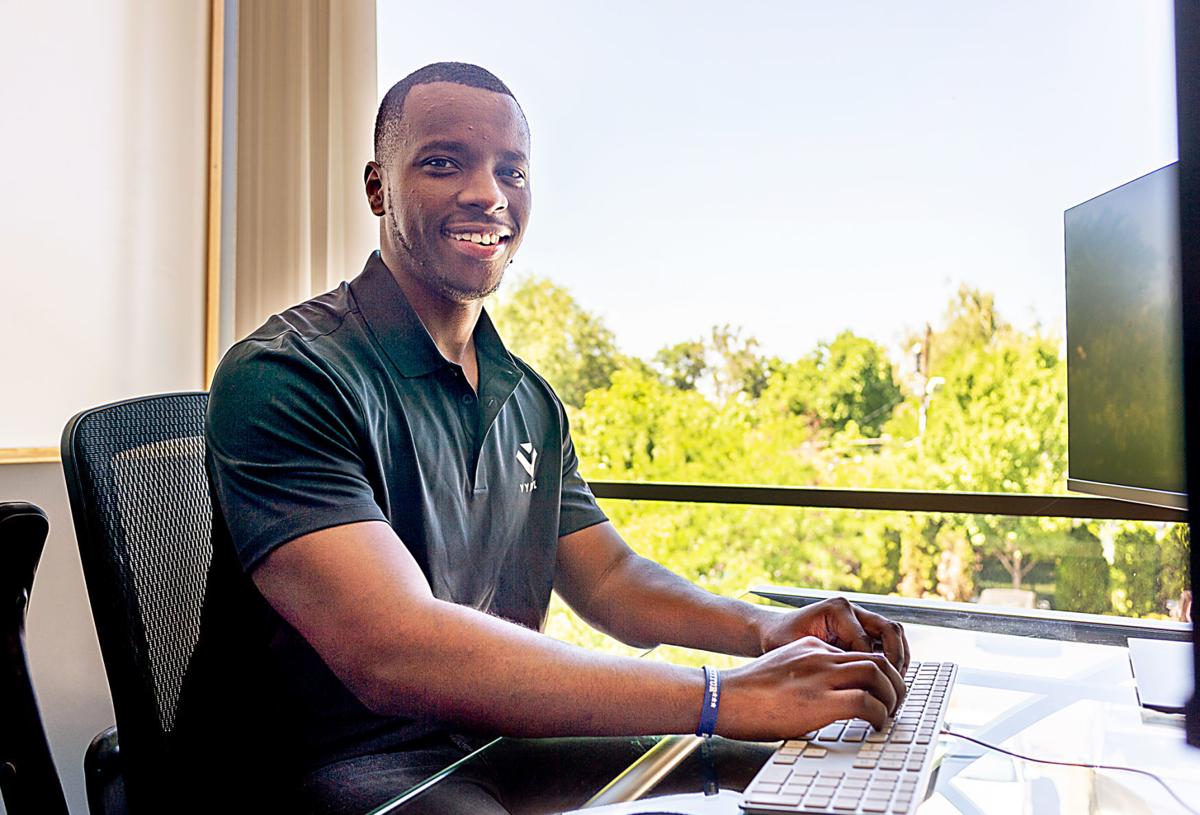 Software developer Yamin Hakizimana at his desk at Vynyl in Boise. Hakizimana, a refugee from Burundi, Africa, went to a Coding Dojo bootcamp class at Trailhead and after graduating was able to go to work at Vynyl. 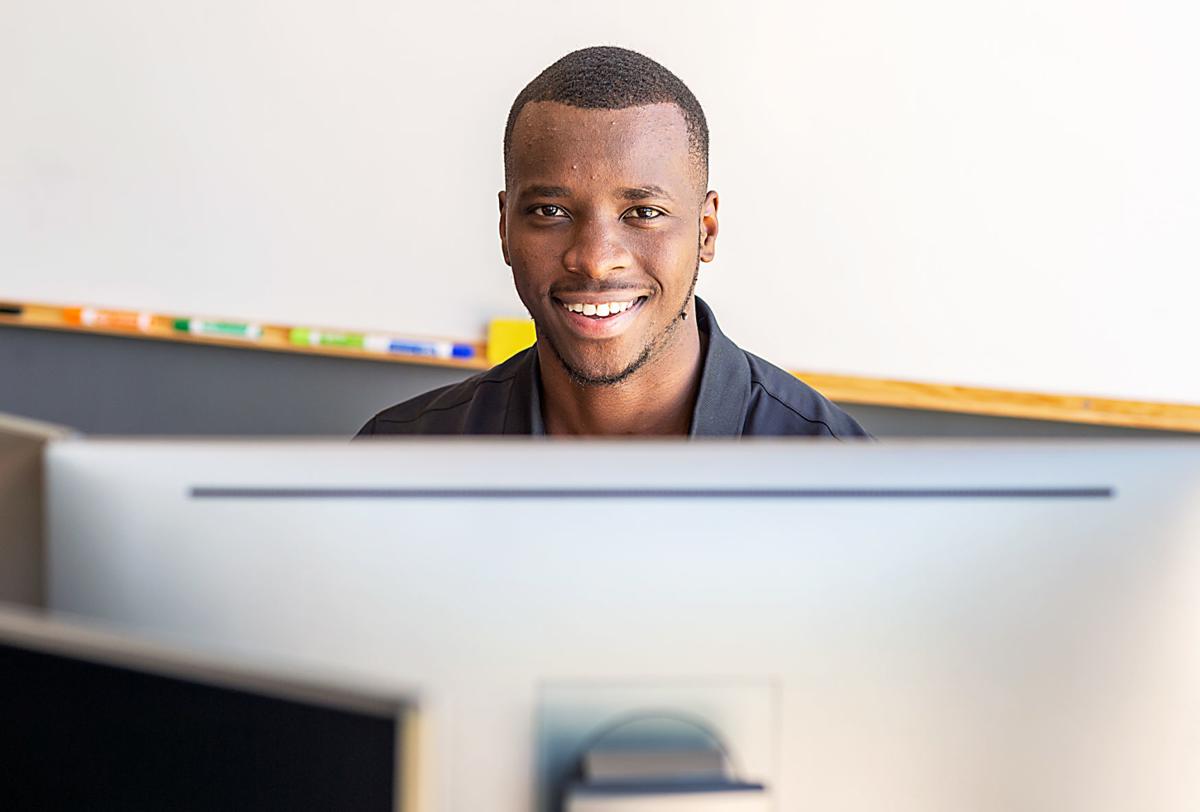 Software developer Yamin Hakizimana interacts with his co-workers at Vynyl. He was hired by the company after completing a Coding Dojo bootcamp class at Trailhead.

Software developer Yamin Hakizimana at his desk at Vynyl in Boise. Hakizimana, a refugee from Burundi, Africa, went to a Coding Dojo bootcamp class at Trailhead and after graduating was able to go to work at Vynyl.

When Yamin Hakizimana came from Burundi, a land-locked country in the continent of Africa, to the United States in June 2014, it was not an easy journey.

Hakizimana was fleeing violence and looking for a better life.

“Things were pretty rough,” Hakizimana said. “I was trying to find where it’s peaceful to go.”

He picked Boise because “I was trying to find a small city where I could go and grow.”

Hakizimana came to the United States without the help of a refugee agency; he was on his own from day one. For three months he stayed at a Motel 6, looking for jobs — anything would do. He worked as a meat cutter and a landscaper. He laid tile for a bath remodeling company. And after he made enough money to buy a car, he became an Uber driver.

And that was how he got what some might call his lucky break.

The ride of a lifetime

One of Hakizimana’s fares was so impressed by the young, bright, resourceful refugee driver who was so exuberant and brimming with positivity that he recommended him to a friend — who recommended him to Tiam Rastegar. Rastegar is the executive director at Trailhead, a business center that caters to startups and techies looking for office space. Rastegar, also once a refugee, was instantly interested and intrigued with “this kid who likes to code.”

Rastegar agreed to meet Hakizimana “to see if there’s something I can do to help him. I immediately sensed something special about him — his energy and aura was just so positive,” Rastegar said.

Hakizimana had dreams of a better life and to succeed — all of which were amplified after his daughter, Kiara Dior, was born.

“When I had her, that’s when everything changed,” Hakizimana said. That was when he met Rastegar and when he was given an opportunity that would change his life. He had long wanted to step into the world of technology, he said.

Coding Dojo to the rescue

Rastegar thought Hakizimana would be a good fit for the Coding Dojo bootcamp which is now housed at Trailhead north, a campus set up on the second floor of the 8th Street Marketplace, above Bodovino in Bodo. The course teaches computer languages and coding on a fast-track learning curve. Rastegar, who knew Hakizimana could not afford the $10,500 price tag for the “hard-core” course, approached the people running the bootcamp to see if there was a way they could pitch in. In the end, Rastegar and Coding Dojo split the difference, 50-50.

“He was on a job laying tile,” Rastegar said. “I told him to come down and sign the papers — and by the way, class starts tomorrow. The rest is history — he just killed it.”

Bryanna Savelesky is a Coding Dojo instructor who worked with Hakizimana. “He’s one of the hardest workers I’ve ever met,” she said. “He was determined beyond belief. He brought the next level to everything he did.”

In addition to being a refugee and still learning some of the idiosyncrasies of the English language and culture — a Scooby Doo reference once stymied him, Savelesky said — he also had to contend with a lack of experience with computers in general.

“He had hardly used a computer prior to going through the course,” Savelesky said. “Each and every step of the way, he was learning the computer, learning about websites and learning how to build them, all at the same time.”

Hakizimana was learning how to code, learning new computer languages — but did not have his own computer.

The nonprofit organization One Refugee stepped in to help.

One Refugee helps refugees to become accustomed to their new homes, and its goal is to help them thrive. It provides career counseling, mentorship, financial aid and more.

And, in Hakizimana’s case: “They bought him a laptop and gave him a rent stipend,” said Rastegar.

It was one more step paving the road to success.

Graduation and a job

Today, Hakizimana is beaming. He graduated from the bootcamp with flying colors. Then — “he really took this bull by the horns,” said Rastegar. “He put himself out there, he networked” — and snagged a choice position as a junior software developer at the national software company, Vynyl, in Boise. “It’s quite the achievement,” Rastegar said.

“I’m proud,” said Hakizimana. “I can never thank Coding Dojo, One Refugee and Trailhead enough. They gave me an opportunity I never could even dream about.”

Rastegar said the scholarship between Trailhead and Coding Dojo was such a success, there will be more in the future. “It was not a one-off. We were so inspired by Yamin, we are going to do more. I’m currently looking for partners to provide a 50% scholarship to Coding Dojo for the underserved: refugees, ethnic minorities and women. We can help change their life’s trajectory.”

Hakizimana said he is grateful to live in Boise, a city he correlates with his success.

Hakizimana is also grateful for those who helped him along the way — especially Rastegar.

“Without Tiam, I wouldn’t be here. He makes me feel like a little brother,” he said.