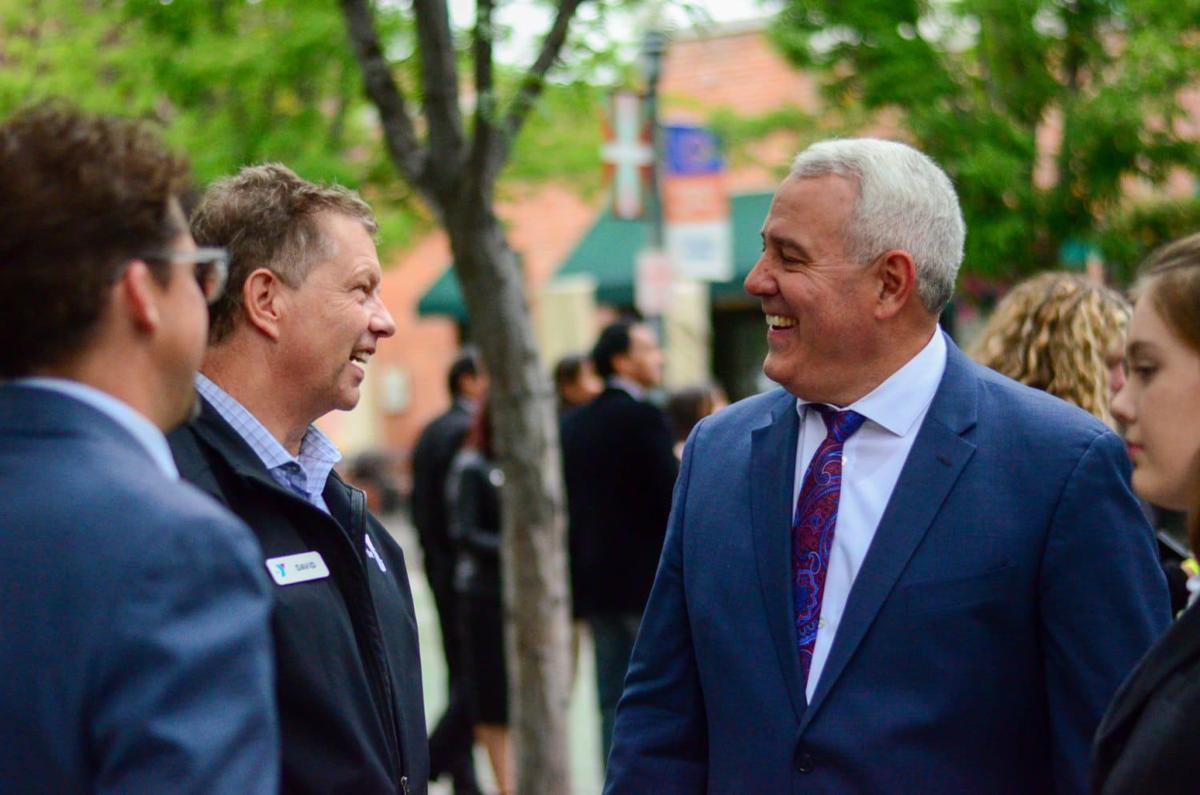 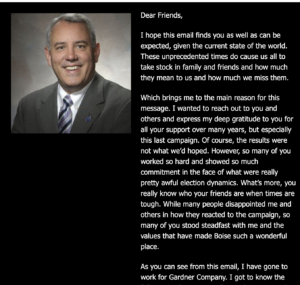 Screenshot of a portion of Bieter’s letter.

Screenshot of a portion of Bieter’s letter.

First posted on BoiseDev.com on June 24, 2020Former Boise Mayor Dave Bieter served in the top political job in the city for 16 years. He left office in January, after Lauren McLean beat him twice at the ballot box.

Bieter sent an email message Tuesday thanking people for past support and outlining some of what he hopes to do with Gardner. He expressed his thanks and then summarized some of his feelings.

“Of course, the results were not what we’d hoped,” he wrote. “However, so many of you worked so hard and showed so much commitment in the face of what were really pretty awful election dynamics. What’s more, you really know who your friends are when times are tough. While many people disappointed me and others in how they reacted to the campaign, so many of you stood steadfast with me and the values that have made Boise such a wonderful place.”

The “election dynamics” line echoes a letter Bieter wrote to a supporter, which the Idaho Statesman’s Hayley Harding obtained. He cited the ballot initiatives over proposals for a stadium and library as factors in his loss, as well as “6 opponents, unfavorable media, tough gender politics, the F35 mission, growth, and rising property values.”

From there, the letter reads much like a set of policy proposals. Before outlining them, Bieter acknowledged that many people think they have a knack for development.

Dave Bieter, Gardner Co.’s newest employee“I learned as mayor that like everyone has an idea for a movie script, nearly everyone has a development idea! I’m not going to say that all of those ideas are good ones, but we all have a vested interest in how our city develops,” he wrote.

“Housing is what our city needs most,” he wrote. “The only way housing will be affordable for us and our children is for good, new residential development to be built.” The price of housing skyrocketed during the tail end of Bieter’s administration. The former mayor and members of city council — including now-mayor McLean and councilor Elaine Clegg worked to prioritize affordable housing. McLean turned even more sharply in this direction as mayor, eschewing some large capital projects like a baseball stadium, streetcar and $100-million plus library in favor of affordable housing.

During his time as mayor, he inquired several times about land in this area during open meetings.

Bieter made a pledge during his 2018 state of the city that would stop some future development in the foothills. Lots already entitled could go forward, but new projects would not. The former mayor never put forward a legislative proposal and no ordinance is in place prohibiting additional foothills projects.

At several points in the letter, Bieter pitches for the recipients to reach out with help, ideas or potential partnerships.

Politics on his mindWhile voters removed him from his most-visible political post, he remains on the board of the Capital City Development Corporation. He nominated himself to the board as mayor – and which he can retain until 2022. The Idaho State Legislature put forth a bill last year that would have forced him and other former elected leaders from urban renewal boards. It didn’t make it into law.

“Periodically, I may ask questions of you, or put out an idea or two, including political ideas,” Bieter wrote. “I know you will be candid in your answers.”