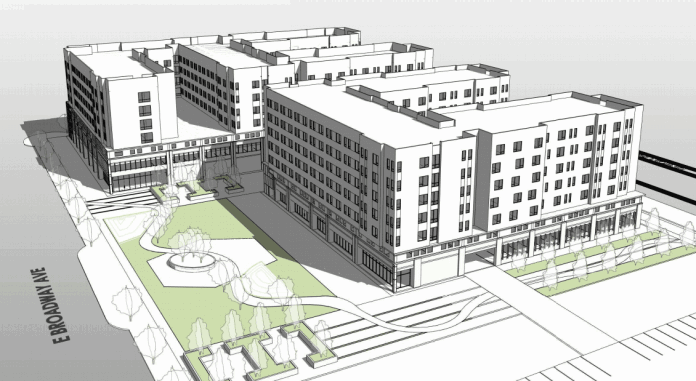 An aerial rendering of the first phase of the Meridian Station project. The Galena Opportunity Fund submitted an application to the city of Meridian for the project in December. 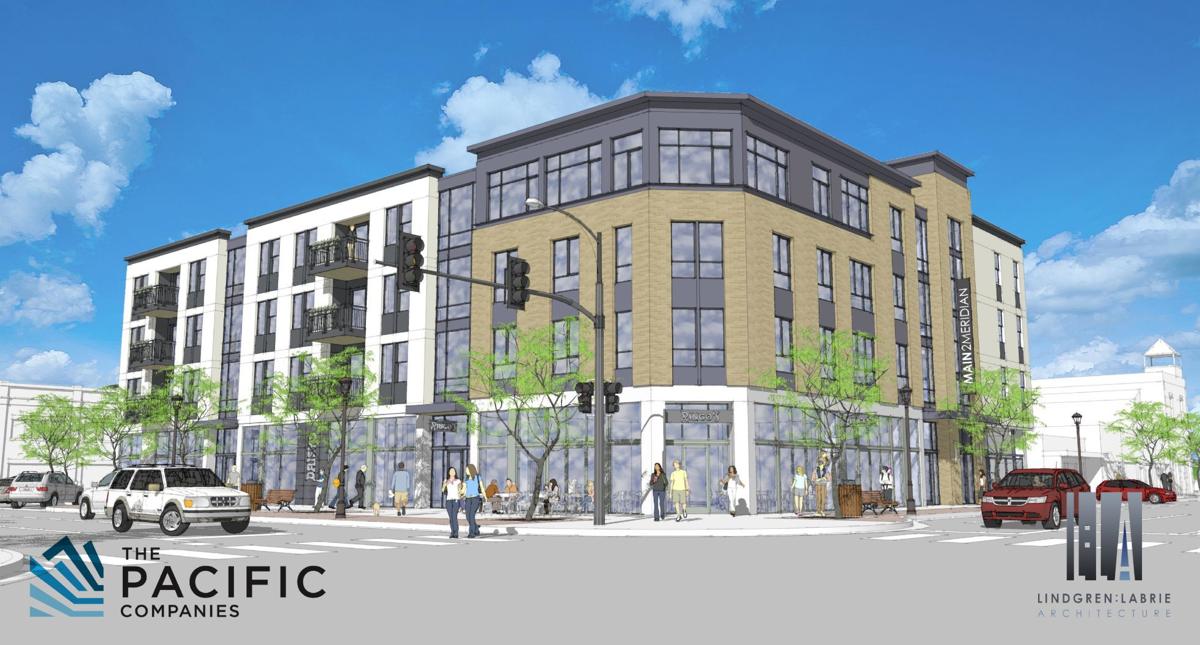 A rendering of the Old Town Lofts project in downtown Meridian. Construction of the project is underway.

This is a rendering of a new community center in downtown Meridian. The new center is part of a development proposed by Galena Opportunity Fund. 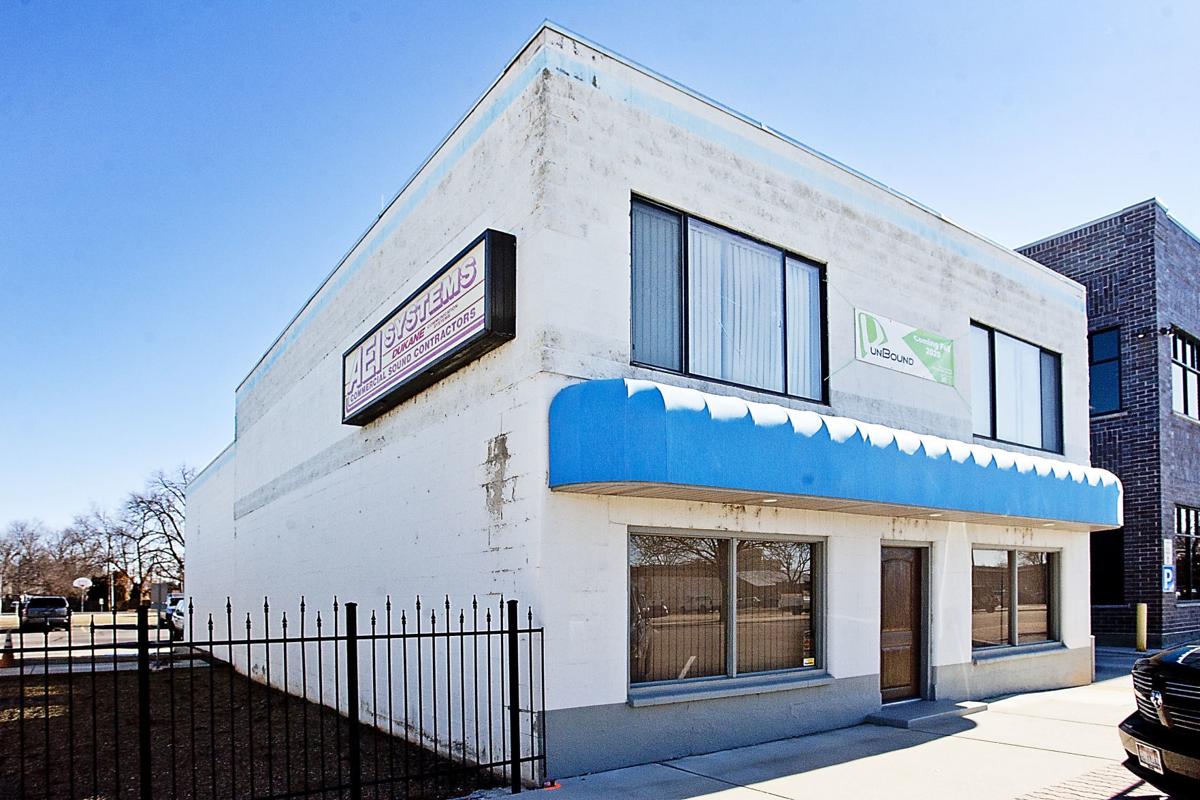 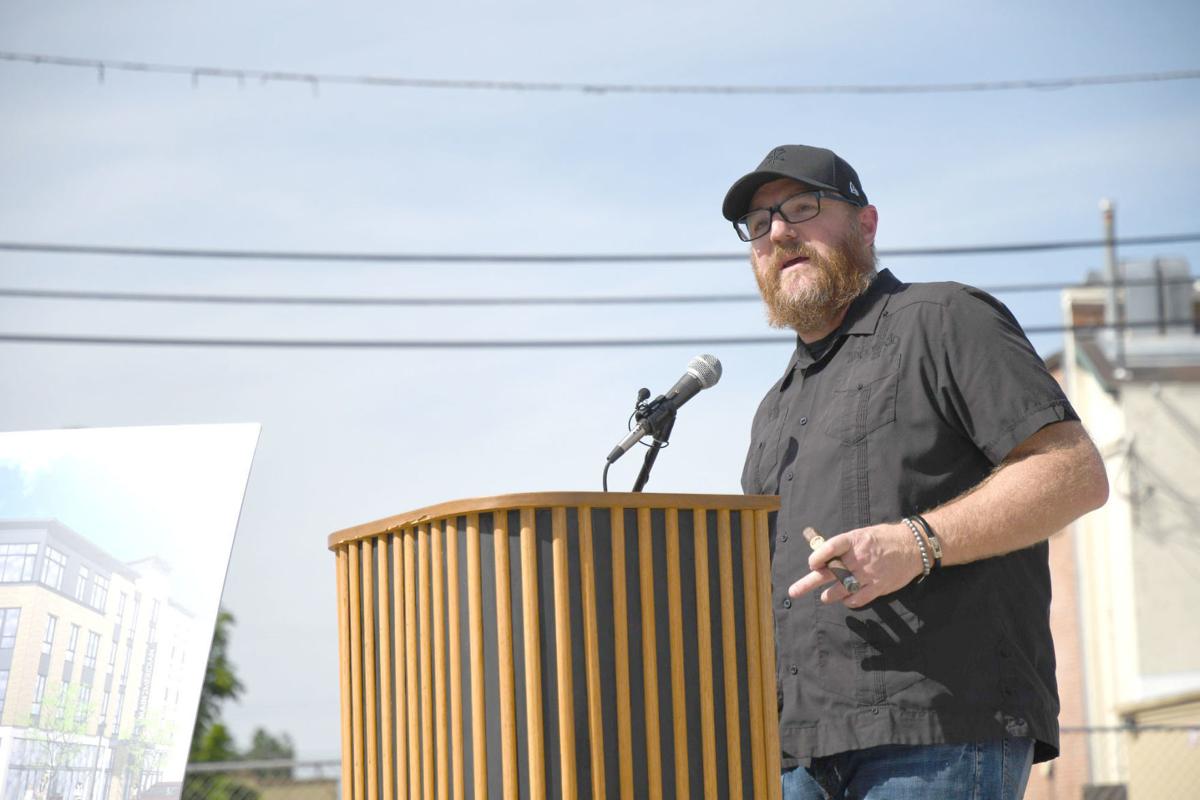 Josh Evarts speaks at the groundbreaking for the Old Town Lofts project on Monday. Evarts is partnering with The Pacific Companies to build the Old Town Lofts, two four-story buildings on the corner of Main Street and Broadway Avenue and Meridian Road and Idaho Street. The project will bring over 100 apartments into downtown Meridian along with 15,000 square feet of commercial and retail space.

An aerial rendering of the first phase of the Meridian Station project. The Galena Opportunity Fund submitted an application to the city of Meridian for the project in December.

A rendering of the Old Town Lofts project in downtown Meridian. Construction of the project is underway.

This is a rendering of a new community center in downtown Meridian. The new center is part of a development proposed by Galena Opportunity Fund.

Josh Evarts speaks at the groundbreaking for the Old Town Lofts project on Monday. Evarts is partnering with The Pacific Companies to build the Old Town Lofts, two four-story buildings on the corner of Main Street and Broadway Avenue and Meridian Road and Idaho Street. The project will bring over 100 apartments into downtown Meridian along with 15,000 square feet of commercial and retail space.

MERIDIAN — Jim Escobar has been working hard for many years to promote downtown Meridian, also known as Old Town. He’s one of several investors who want to see the quaint old town become a bustling city center.

Hundreds of new apartments along with new offices, shops, eateries, retailers and a community center are on the way to downtown.

Projects like the Old Town Lofts and Meridian Station promise new housing. A renovation of downtown’s Civic Block will bring a new community center. And several buildings, some as old as the city itself, will be transformed for modern-day uses.

Escobar is the founder and principal architect of neUdesign Architecture, one of a few dozen businesses located in downtown Meridian. He is a self-described “hardcore downtown Meridian guy” who sat on the Meridian Development Corporation Board of Commissioners for nearly a decade.

His company recently purchased the 127 Club, a historic bar downtown, where neUdesign plans to expand its offices this year. NeUdesign is contributing to downtown Meridian’s revitalization in two ways: by expanding its own downtown footprint and by contracting as a designer for other businesses looking to build or expand.

“I’ve been working hard for many, many years through my own energy to see downtown Meridian blossom,” Escobar said. “I feel like it’s just now starting to blossom.”

Known in its early days as a dairy town, where local farmers took advantage of the town’s central location in the Treasure Valley to ship milk and other products on the railroad, Meridian is Idaho’s fastest-growing city, according to Wallethub.

Today, Meridian is known for its sprawling subdivisions. Downtown has retained its old-fashioned charms — the old Zamzows feed mill greets visitors on Main Street — but it’s not the business or nightlife center that one might expect from a city of more than 100,000.

Escobar said he can’t believe how many times people have asked him “Meridian has a downtown?”

But that’s starting to change.

Escobar said the recent attention is due, in part, to downtown being targeted as an Opportunity Zone, a tax incentive program created by the Tax Cuts and Jobs Act of 2017 that encourages business owners and developers to invest their capital gains in low-income areas.

But investors are also drawn to downtown’s charm, Escobar said.

“People are starting to recognize downtown Meridian, that it is a little gem,” he said. “There’s just an energy there, a vibe to an old town, downtown, that you can’t get elsewhere. And there’s a real sense of community and ownership of that community.”

Escobar said a strong downtown manifests a certain variability, a mix of old and new, a mix of shopping options and office uses. Projects like the Old Town Lofts and Meridian Station will bring that variability to downtown, he said.

The Old Town Lofts, a mixed-use development that will bring apartments and retail space, is expected to be completed summer 2021. Local developer Josh Evarts, known for renovating the Heritage Building and The Vault downtown, launched the project and teamed with The Pacific Companies, an Eagle-based real estate developer.

Evarts, who lives near downtown, said the area is not very active during evenings and on the weekends.

“We want to see a little bit more vibrancy, some things that are happening in the evenings,” he said.

“We believe when we create these opportunities to live and work, we create that kind of vitality,” he said.

Located on a square block between Main Street and Meridian Road, north of Broadway Avenue, the 120,000-square-foot development will feature two four-story buildings with a 105-stall parking lot in the middle. The project lies within Meridian’s downtown urban renewal area.

The Pacific Companies is funding the project and will receive infrastructure reimbursements totaling more than $400,000 from the Meridian Development Corporation.

Old Town Lofts will have 102 apartments, split between one- and two-bedroom units, and 16,000 square feet of commercial space. Evarts said two “significant” anchor tenants are close to signing deals on the corner spaces, at Main and Broadway and Meridian and East Idaho Avenue.

Speaking last month at a stakeholder meeting on the Old Town Lofts, Evarts described the project as a “catalyst” development that would “get people excited about what was possible downtown.”

“This is going to be the biggest thing (on Main Street),” Evarts said.

Evarts may have some competition for that title.

Across the street from the Old Town Lofts, a project that would create the two tallest structures in downtown Meridian is in the planning stages.

In December, the Galena Opportunity Fund, a Boise-based development group led by Bill Truax, submitted an application for Meridian Station, a mixed-use project, envisioned by local developer Bill Ditz, on about 6 acres on the southeast corner of Main and Broadway. The industrial property previously was owned by the Union Pacific Railroad Company.

In July, Ditz told the Meridian Press he was working on purchasing the property from Union Pacific but had yet to close the deal. In October, the East Broadway Investment Company, a subsidiary of Ditz’s development company, the Mountain West Group, purchased the land, according to the application. By that time the Galena Opportunity Fund had entered into a purchase agreement for all interests in the East Broadway Investment Company, which included the former railroad land, and planned to develop the property, the application shows.

The application shows plans for a two-phase project. The first phase includes residential and retail space totaling nearly 300,000 square feet. The second phase, designs for which were not included in the application, will include two “large office towers” about 120,000 square feet each, according to a letter from project designer neUdesign Architecture. The towers will be geared toward “tech” companies and “tech start-ups,” the letter said.

The two residential and retail buildings, each measuring 100 feet, will be built on two parking garages. Between the two buildings there will be 385 apartments, including a mix of studios and one- and two-bedroom units.

The developers hope to begin construction in late spring, according to the application. First, the development will need a go-ahead from the city. The Meridian Planning and Zoning Commission will host a public hearing on Meridian Station on Feb. 20.

Several other projects are under construction or in the planning stages downtown.

Last fall, the Galena Opportunity Fund submitted a proposal to the city to build a new community center and a public auditorium, along with mixed-use space, on the downtown Civic Block. The city agreed to work with Galena on the project, which includes creating a new urban renewal district to encompass the site. The 1.24-acre Civic Block includes the aging Meridian Community Center, Centennial Park and a parking lot — on Northeast Second and East Third streets, just south of East Idaho Avenue — and may be expanded to include additional properties within the Union Pacific corridor south of the community center site. During a January meeting, Meridian Development Corporation officials said they are working on plans for the new urban renewal district which may be presented to the Meridian City Council this summer.

This spring, a new bar and barbershop are expected to open in a 120-year old building, which currently houses The Frontier Club bar. Two storefronts on the east side of the building will house Roosevelt Bar, a cocktail bar named for the 26th president of the United States, and Barclay & Hill barbershop.

The Meridian Library District plans to reopen its unBound library branch downtown. The library’s technology-focused branch will open in the fall after renovations are completed on the former AEI Systems Group building, on Third Street between East Idaho and Broadway avenues.