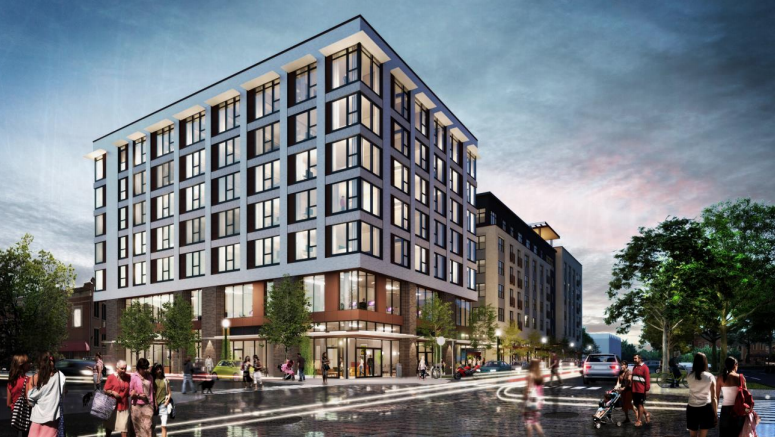 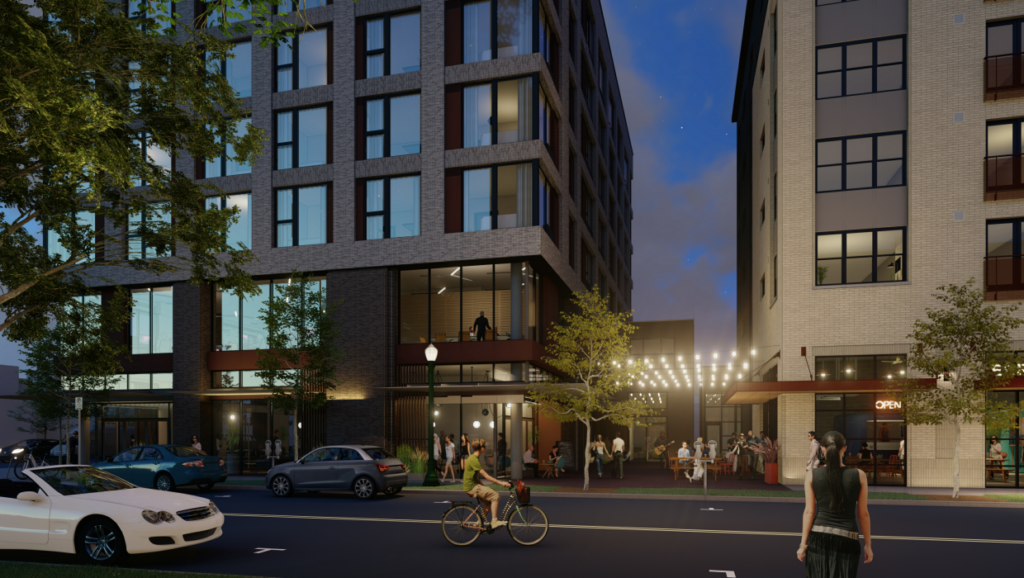 BoiseDev first broke news of the projects last year. Developer Clay Carley spearheaded the $40 million projects, and brought in partners ahead of construction.

Sixth and GroveOn the Sixth and Grove side, immediately behind Strange Love (formerly China Blue), Carley will team with deChase Miksis and the Galena Fund on a seven-story mixed-use building. Carley and deChase previously partnered on The Gibson a few blocks away.

The ground floor will host two retail spaces, including a large 4,000-square-foot space on the corner of Sixth and Grove, adjacent to the Basque Block. A leasing office and bike storage room will also sit on the ground floor.

On the second story, a 7,310 square foot office space will take up the entire floor plate.

Levels three through seven will host 60 apartment units. The majority of units in this building will welcome tenants who make 60% of the area median income and below. The project earned tax credits in association with the City of Boise and Idaho Housing and Finance Association.

Rents will range from as low as $350 per month to $2,300 per month. The range depends on size of the unit, and includes some units in the building that will not have rent-rate restrictions. Here’s how the number of units breaks down by configuration:

Fifth and GroveTwo of the three partners will work together on this project — Carley’s Capitol Partners and deChase Miksis.

The ground floor of this larger building includes nearly 8,000 square feet of retail space, fronting the entire Grove Street and Fifth Street sides of the project. Two large bike storage rooms and storage space round out the first floor. Ten surface parking spots sit behind the building along the alley.

The second through sixth floors include 114 apartments. Rents will range from $975 per month to $2,200. The Capital City Development Corp. said the developers committed to keeping at least 50 of the units at 120% of area median income or below. The apartments will range in size from 400 to 900 square feet, including micro, studio, one- and two-bedroom layouts:

A rooftop patio and garden space will sit on the top floor of the building.

“Along Grove Street at the building (sic) southeast corner, we’re proposing an urban courtyard with outdoor seating to connect the residential lobby and retail spaces between this building and the adjacent building,” John King with Pivot North wrote in an application letter. “This courtyard is open to the sidewalk to further activate the urban space.”

CCDC’s contributionCCDC approved reimbursement of costs associated with both projects this week. The Sixth and Grove building will get reimbursement for up to $600,000 in costs, while the Fifth and Grove project will get as much as $1.1 million.

The money will reimburse the developers for improvements they will make in the public right-of-way, including upgrading streetscapes, relocating overhead utilities underground, repaving the alley and adding new pavers.

The dollars will come from the agency’s tax increment financing funding model and will be paid for from future tax collections on the projects.

A portion of the reimbursements may not happen if CCDC moves forward with a planned revamp of Grove Street as it planned in its capital improvement plan. The agency plans or is building out nearly $11 million in improvements along the Grove Street corridor.

Outside of 10 ground-level spaces, the projects will not include parking for vehicles. Residents will be able to rent space in the new, large parking garage that will open next month at 6th and Front. That garage includes space for 600 cars — far more than needed for the 140-room hotel.

A sign on the site notes that folks who currently have a parking space on the lot will lose their spot at the end of April, but they can also rent a space at the Home2 Suites by Hilton downtown Boise garage.