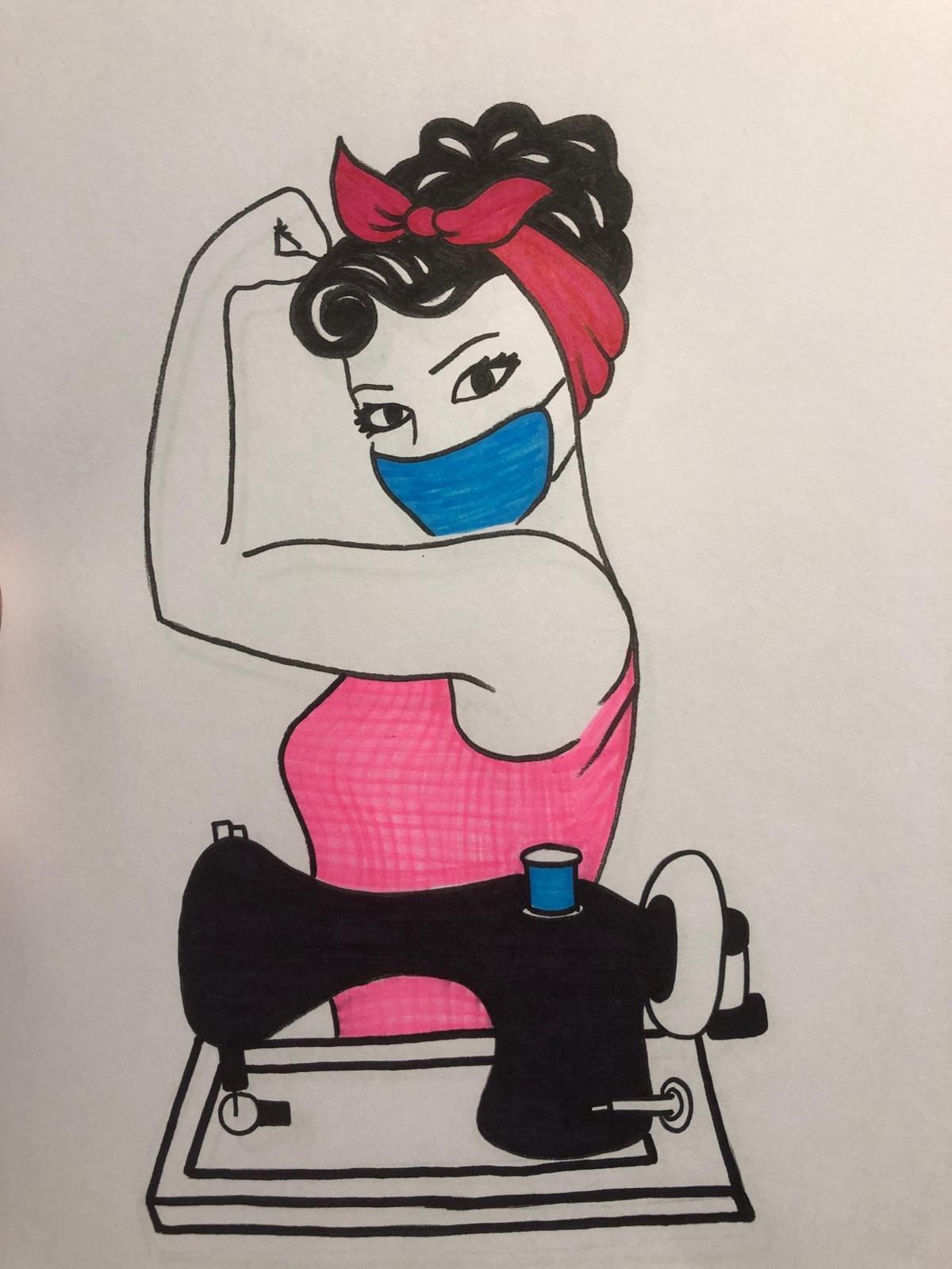 Jocelyn Moore, whose mother is a volunteer for the Treasure Valley Medical Mask Sewing group, created this image for the group. 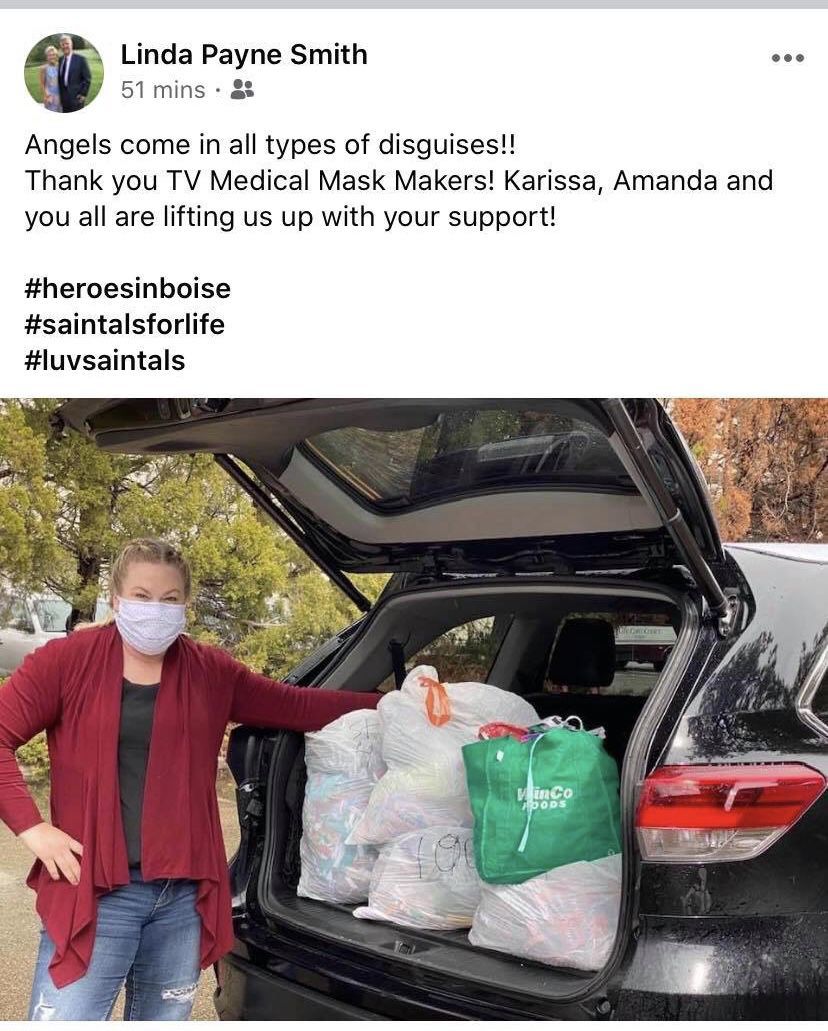 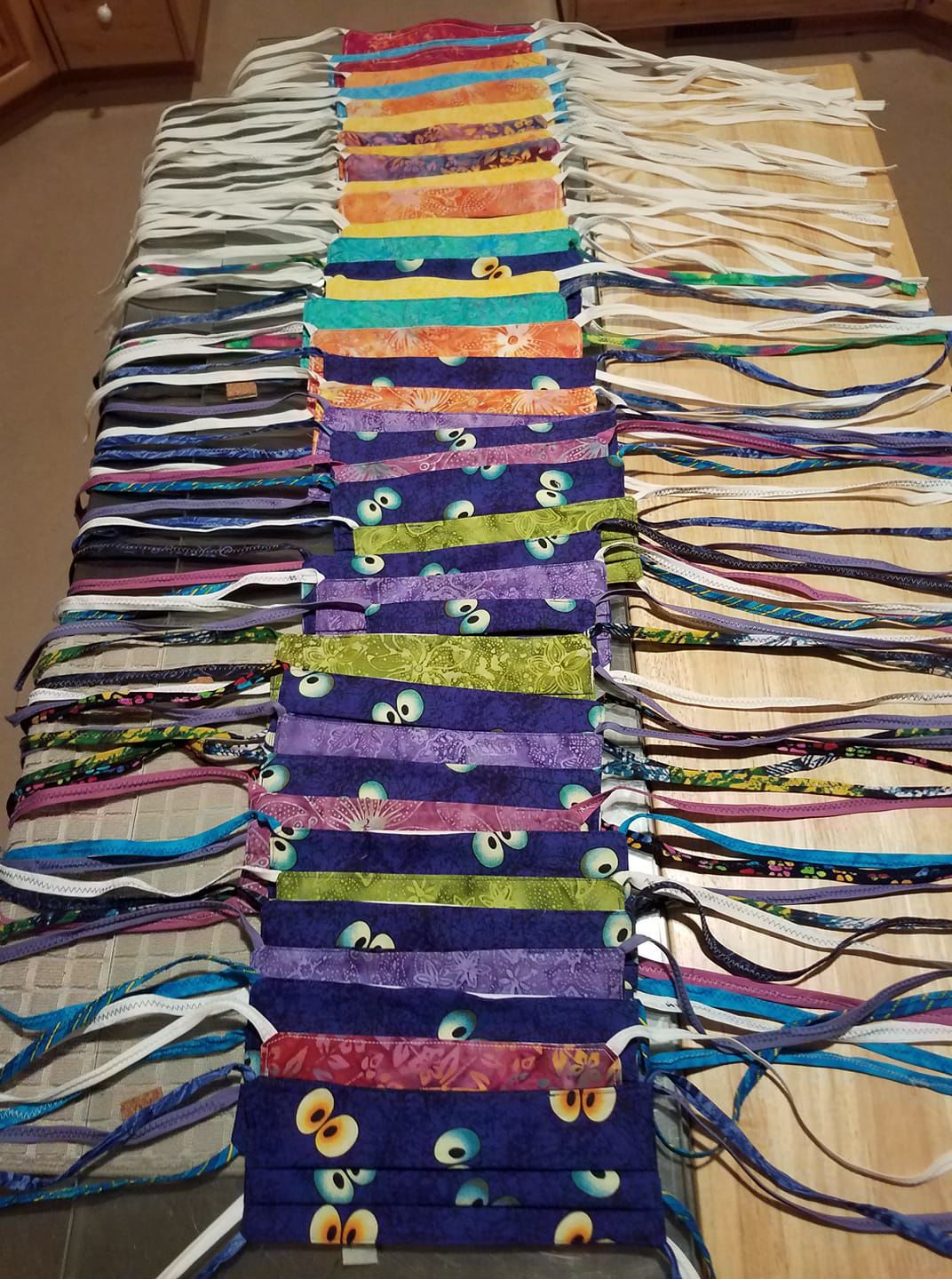 These medical masks sewn by volunteers can help prolong the lives of the N95 masks that are so critical and precious for front line medical workers during the coronavirus pandemic.

Part of a medical mask pattern. 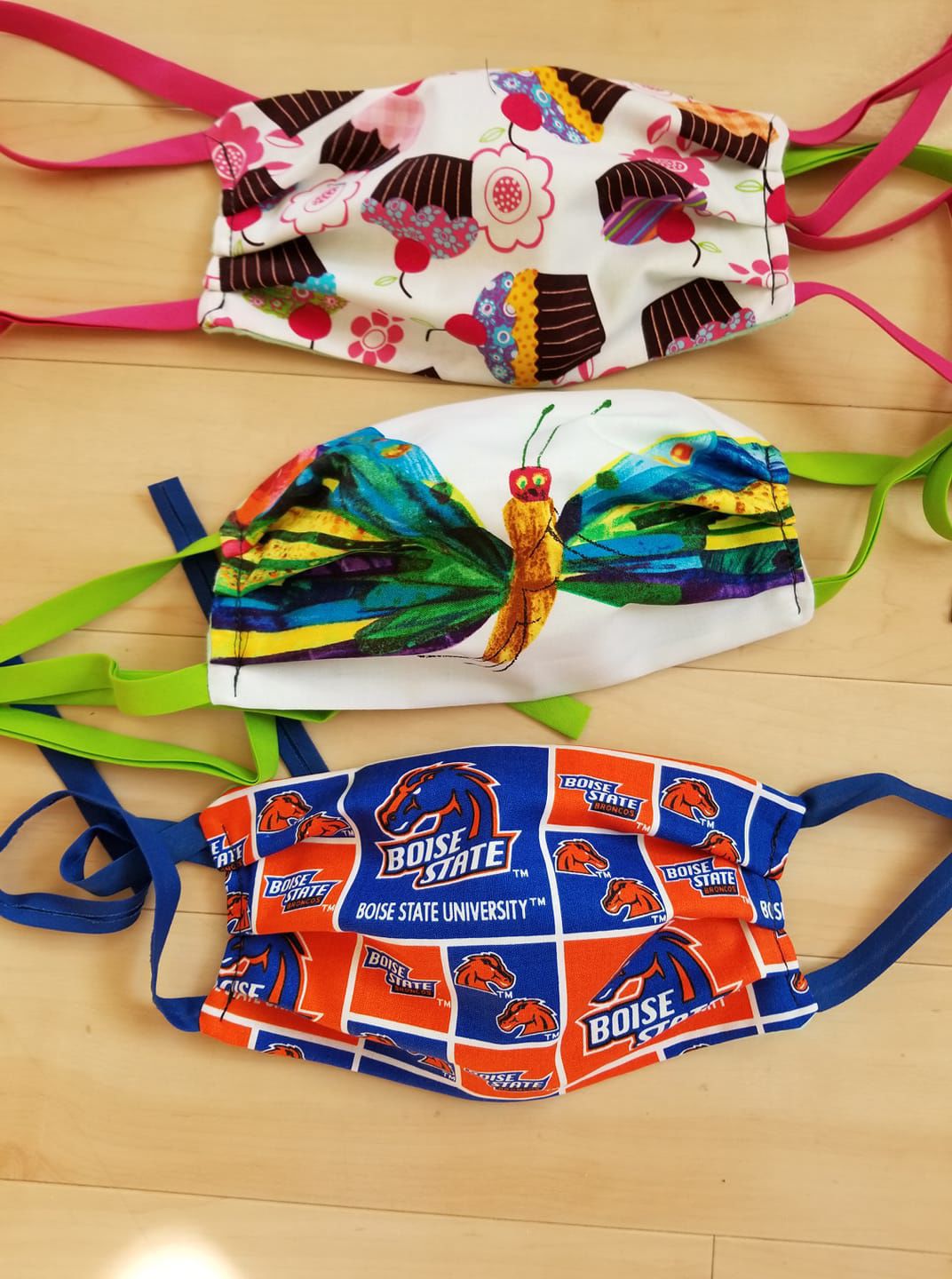 These medical masks are either 100% cotton or flannel. They come in a variety of colors and patterns. 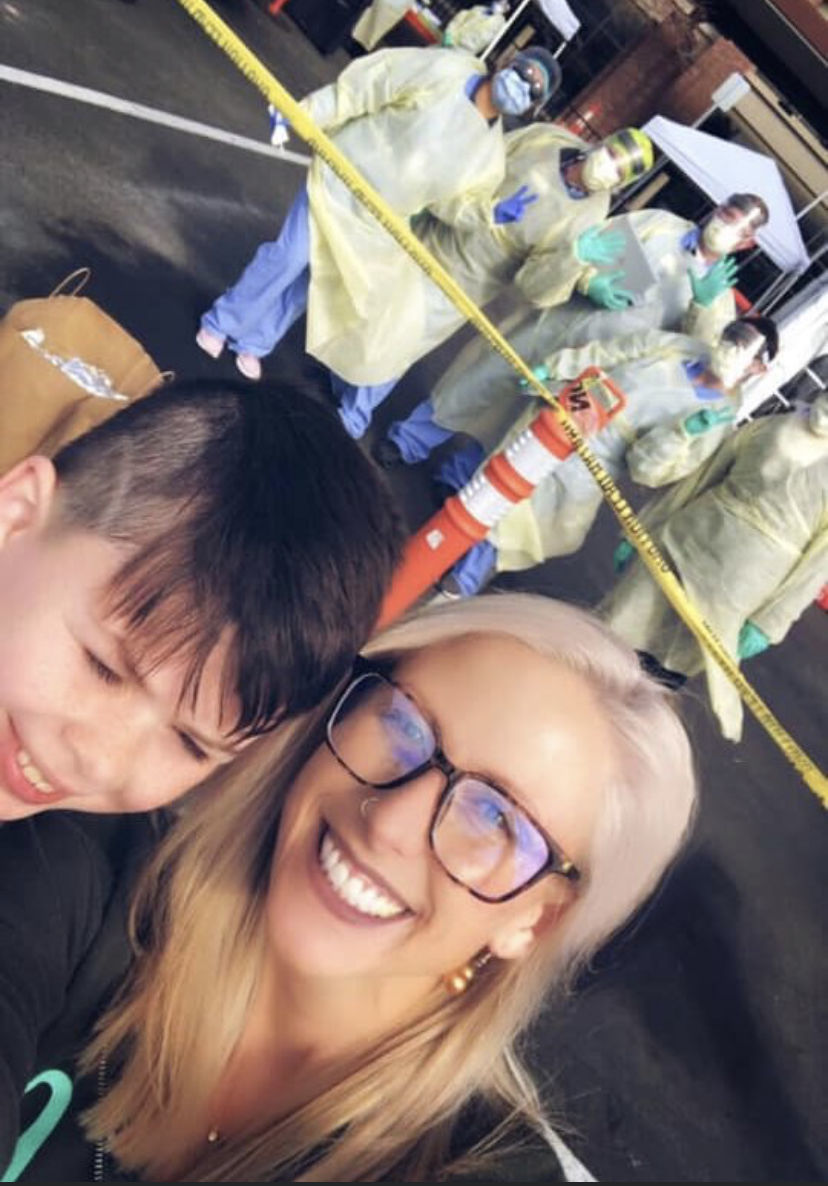 Chealee Cascade and her son are volunteers for a group that delivers hot meals from local restaurants for medical testing personnel.

Jocelyn Moore, whose mother is a volunteer for the Treasure Valley Medical Mask Sewing group, created this image for the group.

These medical masks sewn by volunteers can help prolong the lives of the N95 masks that are so critical and precious for front line medical workers during the coronavirus pandemic.

Part of a medical mask pattern.

These medical masks are either 100% cotton or flannel. They come in a variety of colors and patterns.

Chealee Cascade and her son are volunteers for a group that delivers hot meals from local restaurants for medical testing personnel.

When I first started this feature series, I didn’t know if I would be able to ferret out enough “good news” stories to fill the page. Instead, it’s been the opposite. I don’t have the room to feature all of the good news taking place within our community — but that’s not going to stop me from introducing you to as much good news — and as many of the people creating it — as I can.

Because she had traveled, Karissa Patterson was self-isolating for 14 days. It was Friday, March 20, and Patterson, bored, scrolled through the internet.

“I was going crazy,” the high-energy former professional seamstress and current owner of a cleaning company said. She ran across a video about making medical masks. Before she took on that first project, she reached out to several clinics and nursing homes in the area “to see if they could use them if we made them,” Patterson said. She got the green light and started sewing that day.

Patterson moved to phase two. She made a Facebook group that very day, the Treasure Valley Medical Mask Sewing group. It took off like crazy. People began downloading the patterns, watching the tutorials and sewing like there was no tomorrow.

In addition to providing patterns and videos, the group now puts together mask-making kits that come complete with enough fabric, bias tape and elastic to make 20 masks per kit. Those interested in sewing them can pick up and drop off the kits at a number of locations.

In addition to supplying nursing homes, VA hospitals, and medical and dental clinics, to name a few, Patterson’s crew was able to fill a huge order for Saint Alphonsus on Tuesday to the tune of nearly 1,000 sorely needed medical masks.

No, they’re not the N95 masks that are critical to hospitals and health care workers in protecting themselves against the coronavirus — but they are effective at extending the lives of those masks. When the washable medical masks made by Patterson’s sewing group are worn over an N95 mask, they provide added protection and a buffer for the N95s, which are sometimes shared or used more than once, said Amanda Dillon, who joined Patterson’s group right off the bat and is now a group leader.

“We first started making the masks before there was even a need,” Dillon said. But the need became great practically overnight. “Some of the clinics were out of masks altogether,” she said. “They were using bandannas, scarves. When Saint Al’s saw there was going to be a shortage, they reached out, too.”

Friday, the Centers for Disease Control and Prevention changed their stance on wearing masks, now adding that it is considered an added voluntary protection, but not required. So, neither Patterson nor Dillon think the need for sewing masks will abate any time soon. “I saw on the ‘Today Show’ today,” said Dillon on Wednesday, “that all people should be wearing masks or a scarf or something on their own.”

There’s increasing evidence that people without symptoms can spread the virus, but they could curb that by wearing a mask, the Washington Post reports.

The Treasure Valley sewing group is offering the masks for free to medical professionals, Dillon said. The masks don’t cost that much to make — about $2 each, she estimated. They’re all 100% cotton or flannel.

But making them on a mass scale is different.

Patterson said she dug deep in her own pocket at first, spending more than $1,000 on fabric and other materials, but soon her friends began chipping in. Now, most of the funding is coming from a GoFundMe page she set up.

How long does it take to sew a mask, from start to finish? “The first time, it took me about 30 minutes,” said Dillon. “But it just gets faster the more you do. Now, I can make one in about 15 minutes.”

In addition to helping others by providing added protection to those battling on the front lines of the coronavirus, Dillon said there are other benefits to making the masks. “It’s really helped people mentally to have something to do, to not feel so alone, to know they are helping their community.”

Dillon has two children, Oliver, 4, and Finley, 1. She said Oliver has recently become a Super Mario fan and loves to play the racing game. The mask Dillon made for Oliver features his Super Mario characters, she said, adding that there are hundreds of colors and patterns in the swaths of medical mask material swatches.

“There are superheros, cartoon characters, floral patterns from the ‘70s. … Right now, I’m looking at one with Ninja Turtles,” she said.

Dillon and her family began dealing with the pandemic and its isolating parameters a bit earlier than others. “My husband’s an entertainer,” she said. Magician Farrell Dillon was on a world tour doing a show in Canada when word came down that people couldn’t gather in groups of 250 or more. “It hit us before it hit other people when he had to come home,” she said.

Patterson, who is the owner of Button Babes Household Services, has enlisted some of her employees in mask making, she said, as a way for them to continue working, and to help with all of the incoming requests. Patterson is bowled over by all of the makers who are burning up their sewing machines and churning out dozens of masks a day.

“Really, I’m just the general for the army, just making sure my troops have what they need to go into battle,” Patterson said. “And they are amazing.”

Lucas O’Neill is a real estate professional and works for City of Trees Real Estate, a Keller Williams Realty company. He also is the founder of the “Lunch for Medical Testing Facilities” Facebook group. But he didn’t come up with the idea on his own.

“I guess I have to give my wife full credit,” said O’Neill. “She’s a nurse with St. Luke’s. She actually was testing (for the coronavirus) one day and she texted me and said, ‘Can you get me some hot food?’”

The medical testing personnel are provided with box lunches, but “they’re out there in the weather and the cold and I just figured they should have something warm to eat, so it went from there,” said O’Neill.

He and a group of his friends began by pooling their own money together and then choosing local restaurants for take-out and delivering the meals to the testers.

“I think we’re on day 13,” said O’Neill Wednesday. “We now have 339 members that we pull donations from and who help with deliveries.”

They decided from the start to order food only from local restaurants to help support them. Photos of the food for the day are then posted on social media, “highlighting the company and to give them exposure,” said O’Neill. He said people can donate to the cause through a GoFundMe page.

If you want to help

If you'd like to volunteer to help make masks, or to help drop off or collect mask-making kits, you can go to the Treasure Valley Medical Mask Sewing group Facebook page and request to be a member.

To make a donation for mask materials (fabric, elastic, bias tape), you can do that through the group's GoFundMe page.

If you'd like to help by picking up or delivering food for medical testers, you can go to the group's Facebook page and request to be a member.

To make a donation so the group can continue to support local restaurants and deliver hot meals to medical coronavirus testers, you can do that through the group's GoFundMe page.