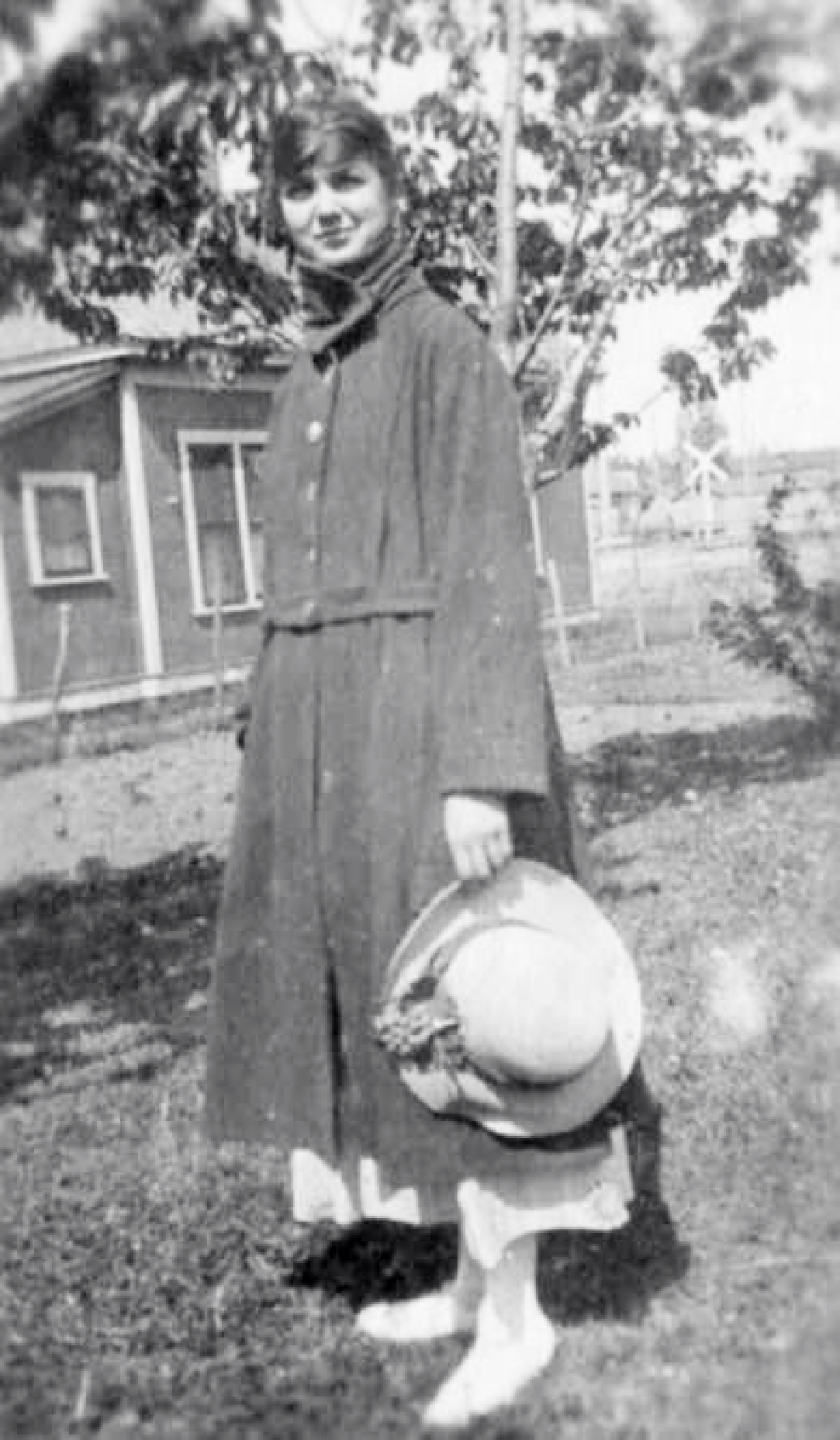 ABOVE: Esther Thomas in 1918. BELOW: Actual passages from Esther’s diary. 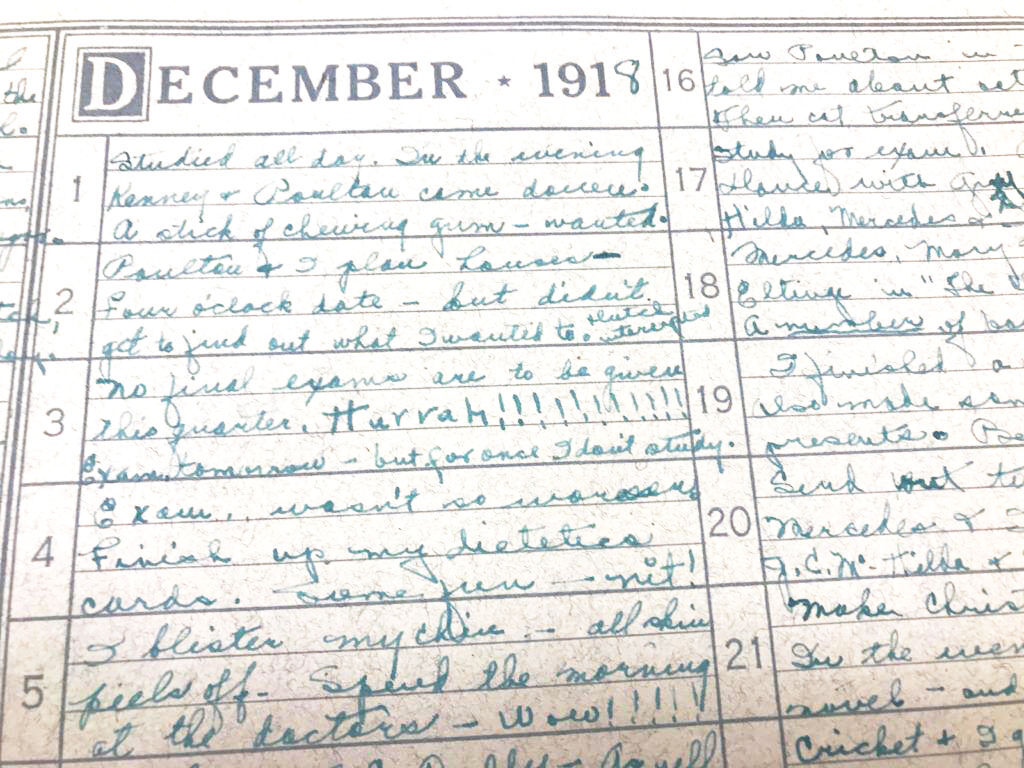 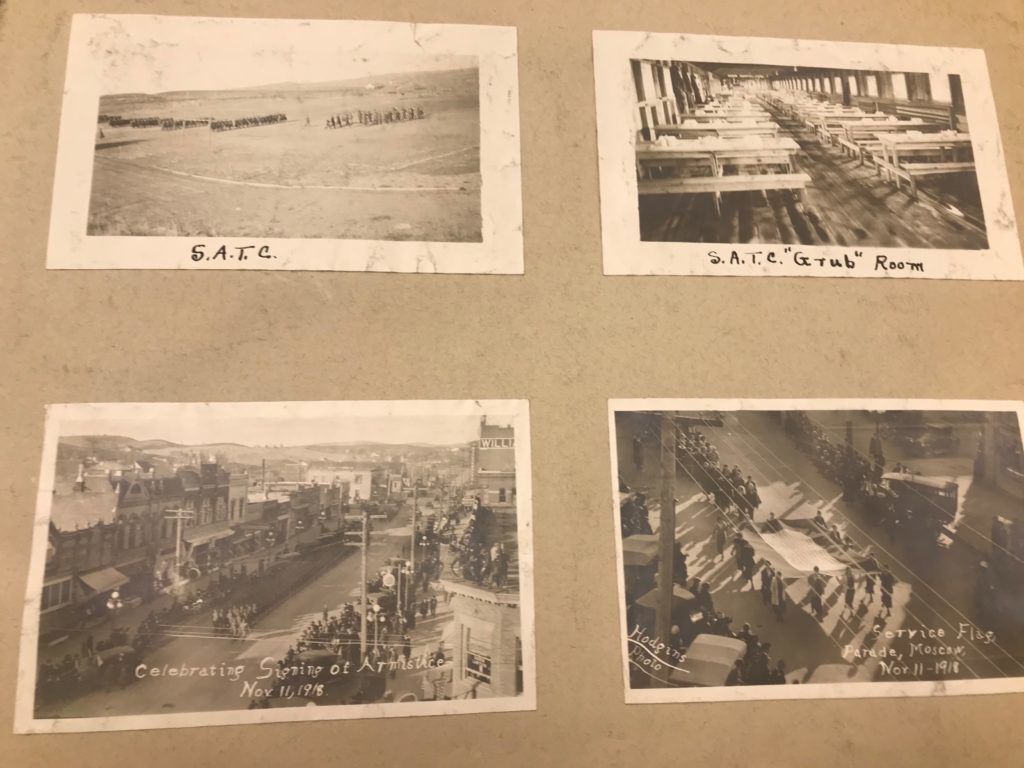 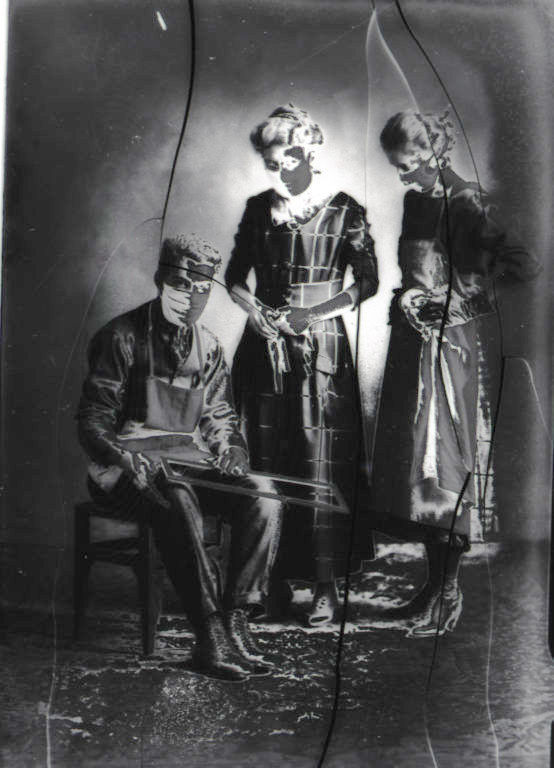 A photo taken during 1918 in Wallace, Idaho shows the masks that many wore. 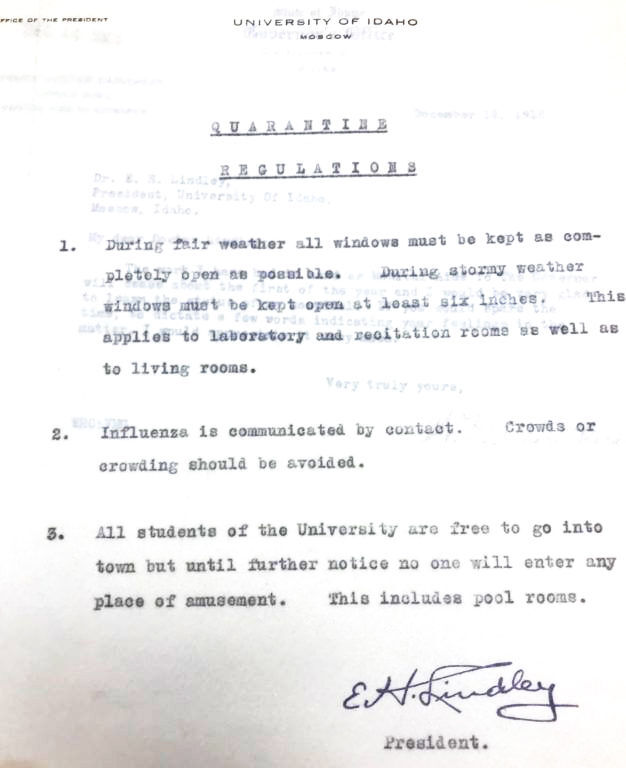 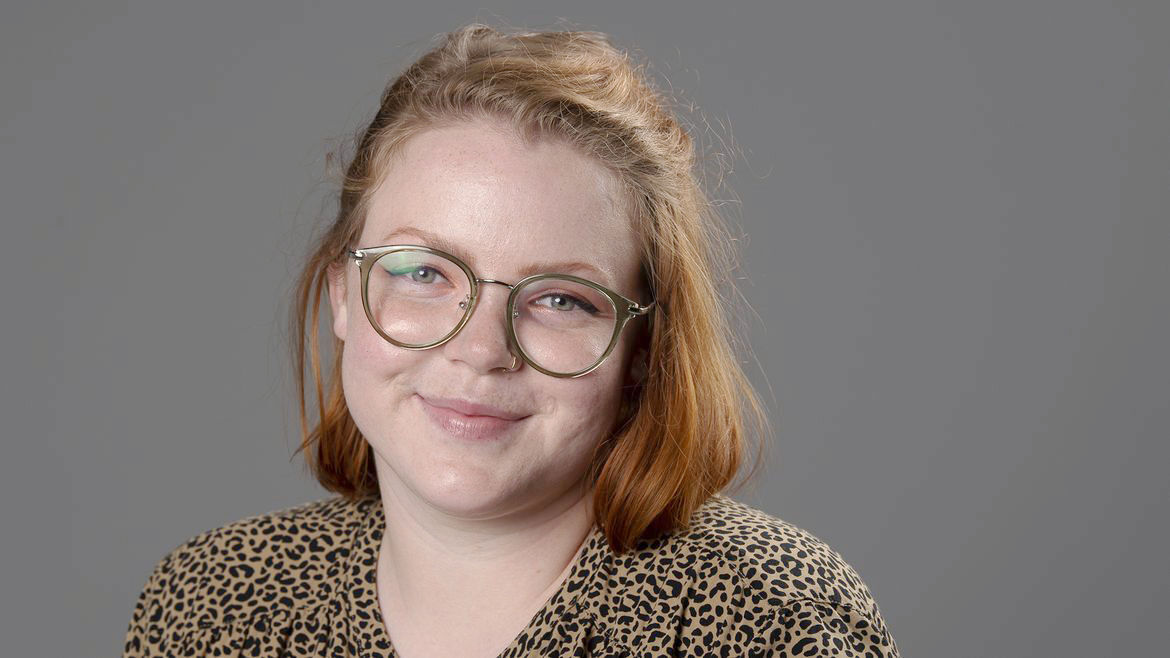 ABOVE: Esther Thomas in 1918. BELOW: Actual passages from Esther’s diary.

A photo taken during 1918 in Wallace, Idaho shows the masks that many wore.

The paper is yellowed, the binding cracked and split. Emerald handwriting, cramped and neat, fills blocks of text across the months. The font is reminiscent of a grandmother’s, but the sentiments contained in the loops of florid lettering are frighteningly familiar to a 21st-century reader.

“All schools closed now,” Esther Thomas wrote. “Forty cases of the flu at the university. Bum at home all day.”

As a home economics student at the University of Idaho, Esther kept a diary as part of her scrapbook. Every day of 1918 bears a line or two about what she’d done that day, how she was feeling or which friends she’d seen.

Esther’s years in Moscow had been busy, with a party on Greek Row or dinner at a friend’s house to attend whenever boredom struck. She filled her scrapbook with programs and tickets from fraternity dances and barn parties, noting the boys she’d danced with and the friends she’d gotten ready with beforehand. Now, the parties and dates were quickly drying up.

The Spanish flu, as it was then known, had already been circulating for months before it reached tiny, distant Moscow. The disease had popped up in military bases in the United States and on the European front as soldiers filled the trenches of World War I. Soon, it was in every corner of the earth, eventually infecting up to one-third of the world’s population, according to the Centers for Disease Control and Prevention.

It disproportionately sickened and killed the young and healthy, who on UI’s campus were encouraged to stave off the disease by avoiding crowds, keeping windows open, chewing their food thoroughly and avoiding tight clothing — shots in the dark against an unknown assailant at the time.

When it did come, in October 1918, three members of the Student Army Training Corps (SATC) were the first to fall ill on campus. The school gym where the student soldiers slept had its heat shut off in an attempt to “freeze out” the flu germs, The Argonaut wrote.

To prevent further spread of the sickness, UI’s campus would be quarantined from the outside world starting that October. Esther grew increasingly desperate. She’d been sick with the flu herself for a few days — only a mild case, she wrote, but the worst part was the doctor’s orders keeping friends away from her bedside.

Esther, who lived off-campus in her family’s home, found herself stuck inside even after her recovery. The white voile dress and black velvet jacket she’d just bought for the beginning of the semester would languish in her closet, she lamented.

She bided her time by sewing sheets for the SATC boys in the infirmary. But there’s only so much sewing one girl can do in quarantine, after all.

“Made some more sheets,” Esther wrote Oct. 22. “Desperation increases. What will become of me?”

The next day, she took some flowers to the sick bay to cheer the boys up. Desperately short-handed, the Red Cross volunteers quickly put Esther to work as a nurse. By the end of the week, her quarantine boredom was a thing of the past.

“Gave my first medicine to the sick men today,” she wrote. “Didn’t kill any of them either.”

As cases began to pick up across Moscow — over 200 cases were recorded among the SATC men alone — orders came down from the U.S. War Department that all student soldiers must wear a gauze face mask.

That mandate was unpopular from the beginning, The Argonaut reported in November. Soldiers had to wear masks at all times unless they were eating, so “many prolonged their eating periods until nearly every minute in barracks was spent with an apple or a Hershey,” the report stated.

Another soldier would let the mask slip below his nose, ready to pull back up if he was called out, because “he was afraid he’d breathed his mask full of germs and didn’t want to breathe them back in again.”

The mask mandate was rescinded within a week, reportedly because of countless complaints about being unable to smoke, The Argonaut reported.

Those quarantined on campus were making the best of their boredom, according to a regular Argonaut section titled “Quarantine Notes.”

An aged photo from 1918 shows the masks that were worn during this time.

A photo taken during 1918 in Wallace, Idaho

shows the masks that many wore.

In Ridenbaugh Hall, the campus’s main dorm building at the time, students took to holding singing and dancing recitals in the common rooms, and compiled a small newspaper called the “Peek-a-Boo” to disseminate the dorm’s latest gossip.

At the Delta Gamma house, students held a fashion show one night where they served grape juice and popcorn balls. At Sigma Nu, brushing up on “the manly art of self-defense” one particularly boring evening resulted in a broken nose for one member.

By mid-November, Esther joined the girls of Ridenbaugh Hall in quarantine — off-campus students had to receive a health certificate after an isolation period before they could return to classes. She joined other home economics students in cooking meals for the convalescent soldiers. Her days settled into a blur once again — save the end of the war on Nov. 11 — until quarantine was lifted at the end of the month. By the end of that week, Esther was off to Spokane on a date. A week later, it was announced no final exams would be given that quarter — noted in Esther’s diary with a “Hurrah!!!!!!!!!!”

By December, Moscow was almost back to normal. As the burden of disease and of war lifted off the town’s shoulders, an immeasurable sense of relief must have swept the people. But the pandemic had not been without its losses, small as they may have been in remote North Idaho. Twelve SATC men, young and hardy, had died from the disease, their bodies sent by train from Moscow back home to Sandpoint, Coeur d’Alene and Montana.

Quarentine regulations issued by the University of Idaho.

Across the nation, over 675,000 people died from the Spanish flu, according to the CDC. The virus’s origins, commonly traced to an Army cook in Kansas or an overcrowded field hospital in France, are still not clearly understood.

Americans of the early 20th century grappled simultaneously with the death they’d confronted overseas during the Great War and at home in the war against an unseen attacker. They held their heads high, and they tried to carry on.

An Argonaut article that December looked back at the pandemic’s course through Moscow and wondered whether the precautions taken were the right ones, or whether they’d been made in time to save enough lives.

“Because there was no assured knowledge of how to deal with the disease, the nation was not prepared in advance for the epidemic,” the article reads. “The result was that whatever was done was generally too late…But modern science, even for the time being baffled, refuses to be helplessly passive. It knows a great deal about the disease, despite the beliefs of absolute prevention or infallible cure.”

And Esther got right back into the swing of things. There were still dates to be had, dances to attend and friends to play cards with. That Christmas season, she emerged from quarantine to make candy with the other home economics students and went caroling with friends on First Street. She went Christmas shopping downtown and brought in quite the holiday haul herself — “Old Santa was very good to me this year,” she wrote on Christmas Day 1918.

As 1919 approached, it brought the promise of a clean slate. The snow falling on Moscow blanketed all in sight, and as it melted, maybe it would wash away the pain of 1918.

Esther rang in the new year surrounded by friends and family — no more isolation for her.

Here is the link to the digital exhibit, specifically the article about masks we discussed. From here you can navigate to the rest of the archives including pages from Esther’s diary. https://www.lib.uidaho.edu/digital/1918flu/items/spanishflu062.html

Riley Haun, from Homedale, graduated from the University of Idaho in Moscow in December with a journalism degree. She worked on staff of the school's magazine, "Blot," and last fall was scrambling to come up with a story idea, with a deadline fast approaching. "I thought, 'oh, there was another pandemic,'" remembering the flu pandemic also known as the Spanish flu of 1918.

"I was poking around on the library archives and there was a whole exhibit about it" Haun said. That's where she came across Esther Thomas' diary. Bingo! She had her story.

"The hardest thing was it was all in cursive handwriting — it's difficult to read," Haun said.

After she found the exhibit in the digital collection, Haun made an appointment to see the diary in person. While reading it, she found a young girl's musings from more than 100 years ago "very oddly relatable to what folks I know in Moscow are now going through with this pandemic."

Haun said Thomas was also very dramatic, another attribute Haun can relate to. "At the time I had just finished an internship, didn't have a job — I had the exact same feelings that Esther had. She wrote: 'What will become of me?'"

In another diary entry, Thomas captioned a photo of herself with: "I didn't want to have my picture taken." Haun could again relate. "How many pictures of me could I caption the same way?"

Thomas' diary, which is actually one of the hundreds of leather-bound scrapbooks that U of I regularly handed out to incoming freshmen, is the only one returned and filled out from that time. It was anonymously donated to the library, Haun said.

Now that Haun has graduation under her belt, she is "biding my time until things get back to normal." Armed with her journalism degree and a passion for feature writing, she is hoping to make a career in the field. Landing a slot at the New York Times "would be great," she said, laughing. For now, though, in true Esther Thomas mode, Haun said, "I'm preparing for the worst … and hoping for the best."