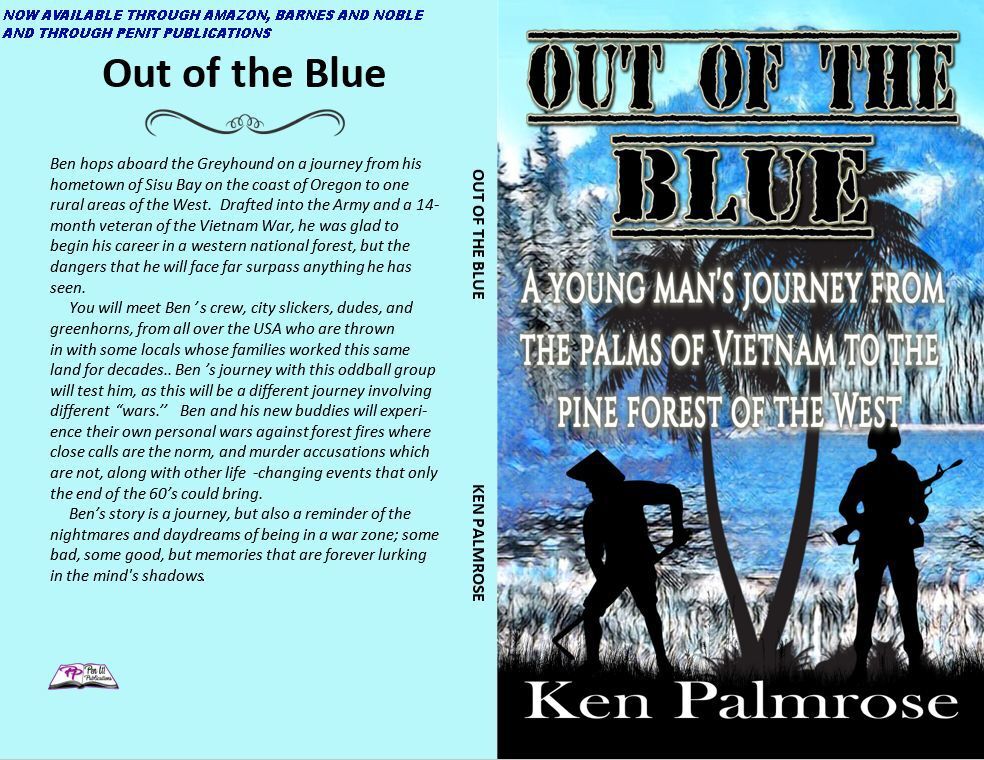 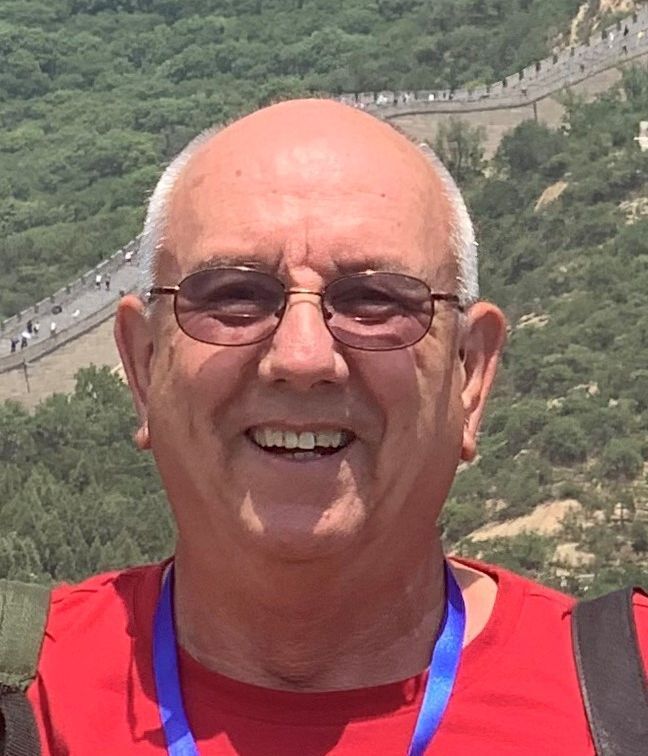 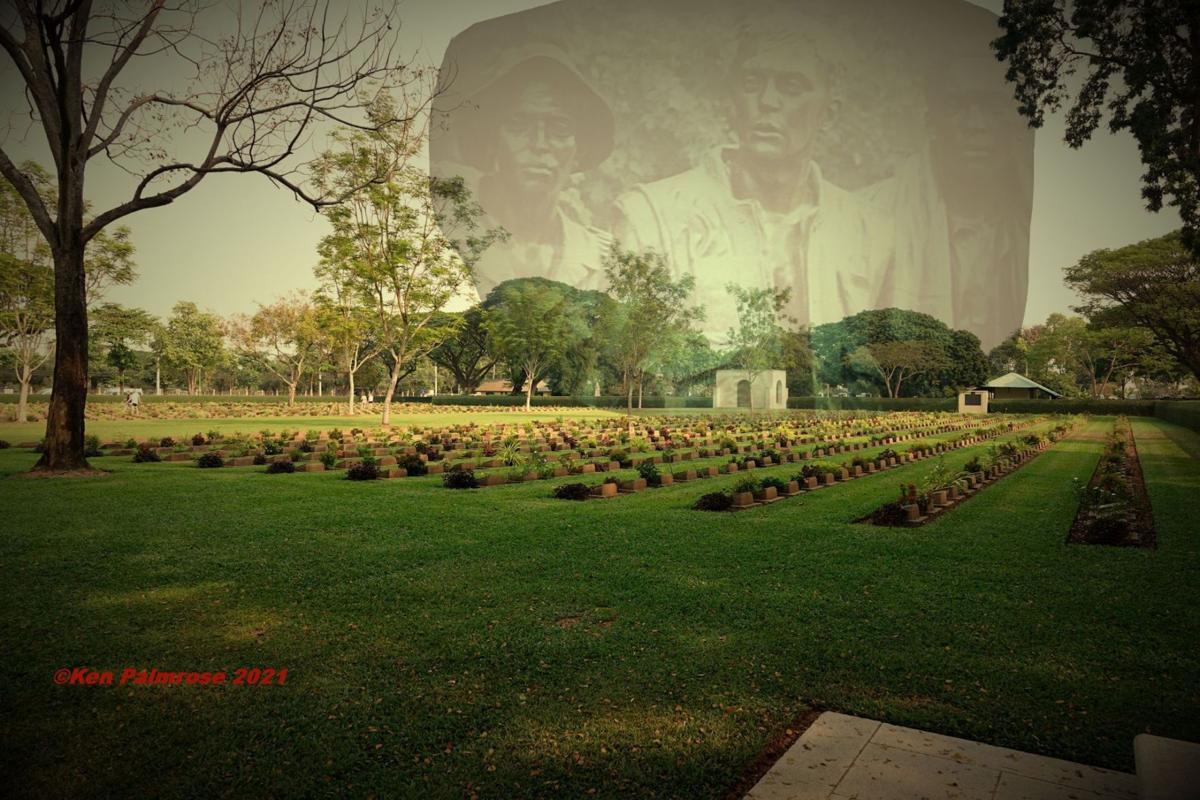 Ken Palmrose, a new author at 75, joins a long list of writers who came to the page later in life — Mark Twain, Toni Morrison, J. R. R. Tolkien all started after age 40. Raymond Chandler was in his 50s. Bram Stoker, famous for “Dracula,” was 64. Laura Ingalls Wilder of “Little House on the Prairie” fame was 65.

There are even a few first-timers who make Palmrose out to be just a kid: Bertha Wood published her first book on her 100th birthday and according to the Guinness Book of World Records, Jim Downing was 102.

Palmrose, who now resides in Meridian, began working on his book, “Out of the Blue,” a handful of years ago. It’s about “a young man’s journey from the palms of Vietnam to the pine forest of the West,” and Palmrose may or may not have relied on his own wartime experiences as part of the research. Now the story that was once only a sort of movie playing in his own head, is available to anyone who wishes to read it.

Palmrose, also a poet who has a chapbook in the works, recently answered a few questions via email about his life, his book — and what’s coming next.

Jeanne Huff: You grew up in Seaside, Oregon. Did your early surroundings of ocean and terra firma inspire you to forge a career in the Forest Service?

Ken Palmrose: Actually, yes. I grew up a mile inland on 20 acres next to one of the largest tree farms in the country. Below our house was my Finnish grandparents’ dairy farm. When the farm couldn’t compete any longer, the farm was no more and my dad who helped run it went to work in the woods, first as a timber faller and later with his own gyppo cat logging company (editor’s note: this means independent from a large lumber company). Finnish people have an innate love and respect for the land and natural resources and I could see that in my father as he groused constantly about improper logging going on near anadromous streams and other bad logging operations.

One day in high school he asked me to come set chokers over the weekend behind his D4 Cat as no one else was available. After a miserable Oregon Coast weekend of that and me a dead tired teen, he looked at me and said, “I think now you know which side of the chainsaw you should be on!” I understood exactly what he meant and from that day on wanted to work in some type of natural resource management career.

JH: You became a writer/editor while at the Forest Service. What was that experience like?

KP: Throughout my 36 years with the USDA-Forest Service, I had a large number of career changes based upon opportunities, both for promotion and for transfer. I was assigned as a cartographic technician on a Forest Planning Team and in time they discovered I was more literate than most of the teams’ professional foresters and engineers and became the writer-editor on the planning team writing and/or editing environmental documents and documents for public interaction. It was challenging.

After a while they discovered I was better with people than most of them, so I then became a Public Affairs or Public Information Officer, first on the team, later for a forest, and later for a Region, all because I did love to write — something.

JH: Did you like to write when you were in high school?

KP: I was so shy in high school, you would never get to see me admit to writing anything or really expressing much in front of other people, but I loved writing short stories back then, most of which I never shared.

My first poem was written in November of 2020 after I signed with a publisher for my novel. It was a freeform/free verse poem like all of mine and I ended up writing 37 more in the next few weeks. It is called “White Cocoon.” Not only is it the first, but it is also the longest one I’ve written. After that, I wrote “No One Asks Why,” a kind of protest poem about the losses of war and our inability to learn.

JH: You served in Vietnam in ’67, ’68, which was during the Tet offensive. What was your assignment, what did you do there and what were your impressions?

KP: I was drafted within five months of starting my new career with the Forest Service and ended up after basic training going to Military Intelligence School at Fort Holabird in Maryland. Go figure.

Seems like they noticed I received good grades in photogrammetry and I ended up being trained as an Imagery Interpreter, much of which I already studied. I was assigned to the 519th MI battalion and we worked in an air-conditioned secure building near Tan Son Nhut Airbase but were bused every day six kilometers southeast to our compound which then was out at the far edge of the furthest reaches of rural Saigon. We looked for the enemy on photos and infrared imagery and plotted bombing runs and airstrikes, and we also did tactical terrain studies to help our troops on the ground find ways to get across the country either on foot or in tracked vehicles.

The people were nice, our counterparts worked hard for the most part and we were lucky for the first seven months. After Tet, the last seven months, not so good.

JH: Did your experiences in Vietnam inform or inspire “Out of the Blue?”

KP: Not really, per se; they just became part of a novel that originally did not contain Vietnam reference at all. When I rewrote the entire novel, again, it all became clearer and then Vietnam became part of the main character’s persona, so to speak.

JH: Now that you are an author, can you speak about writers that have influenced you and your writing?

KP: I think the book that influenced me or maybe affected me the most, believe it or not, was John Steinbeck’s “Travels with Charley in Search of America.” I am not a huge reader, my wife is the one who is the voracious reader in this family. I read “Matterhorn,” because it was written by Karl Marlantes, a high school classmate, and it was a further influence on me to tell a story, in part, about one of the 90% of Vietnam veterans who were in Vietnam and never fired a shot. Just not many of those stories out there.

JH: How hard was it to finish the book — and how long did it take?

KP: I started this about five or six years ago and just wasn’t sure what I wanted to do and which way to go. I wanted to write a screenplay and then decided, that is a lot of work I am not familiar with … but now I think I may write one to this novel. Once I started rewriting the whole thing about a year and a half ago, it was really easy to just go for the finish and hope for the best.

JH: About your process: What method did you use? An outline? Storyboard? Or just let the story take you where it will?

KP: I have used storyboarding in my job as a Public Information Officer on many occasions, but for writing, most of the of times the board is in my head. I outline numerous story thoughts in my mind and then think of the order I want them to be in and then I start writing everything out.

Lots of times the finishing touches come to me about 2 or 3 in the morning.

JH: In addition to being a writer, you also are a photographer and a traveler — you’ve been to 25 countries around the world. When you visit other countries, what kinds of subjects do you like to photograph the most and why?

KP: Having worked on or near some of the most beautiful landscapes on this country, I was a landscape photographer first and foremost. I loved the work of Ansel Adams and what could be done with or without color and under different lighting conditions. In the beginning, I wanted my photos to be devoid of any people. But, once I started traveling and see the diversity of people and the joy of their children, I spend a lot of time photographing what I see of local culture. Whether in Africa or across Asia, or here in the U.S., children at play, people at worship or doing what ever it is they do in that area to support their families is now the most fascinating subject to me.

JH: You also write poetry. Do you have any chapbooks or other published works?

KP: I have only written 38 poems so far, so I haven’t published anything yet. I would like to do an Ebook/Chapbook with one of my original photos/images accompanying each of 25-30 poems.

The idea is if a reader doesn’t like a particular poem, perhaps he/she will like the image. Print is probably too expensive for most to take a chance on me, so an e-book may be the best route.

JH: Who are your favorite poets and why?

KP: I really didn’t think about poets from my education days or the numerous FB poetry groups I belong to when I started writing. I read online poetry as a member of many groups and so much of what I read is like a Hallmark greeting card or a series of Burma Shave signs (you’ll have to google that).

But the poet I am absolutely inspired by is Amanda Gorman. Young, bright powerful, and relevant for today!

KP: None, I’m afraid — well, perhaps “Matterhorn” for its realism and honesty and it is said by many to be the best war book ever written.

JH: What do you like to do for fun?

KP: I walk 12-15 miles per week, I play lots of bad but really fun golf and I hope to travel once again.

Traveling around the world gives you a perspective of places and people you will never have if you just keep staring at the same neighbors and scenery for the rest of your life.

JH: Looking forward, are you planning on another book?

KP: Yes, the storyboard is upstairs and is about two-thirds complete and I hope to start soon. Poems yes, I would like to write many more.

KP: I have talked to many people around my age who say they have stories, too, they have stuff written but thrown in the back of a desk or they don’t think anyone would care what they write. I say it’s never too late to try to write something down or record your thoughts and have someone else write them. I wished I would have recorded conversations and stories from my grandparents and parents. What a wealth of writing material and things to pass on to my children and grandchildren.

'Out of the Blue'

"Out of the Blue"

A young man’s journey from the palms of Vietnam to the pine forest of the West.