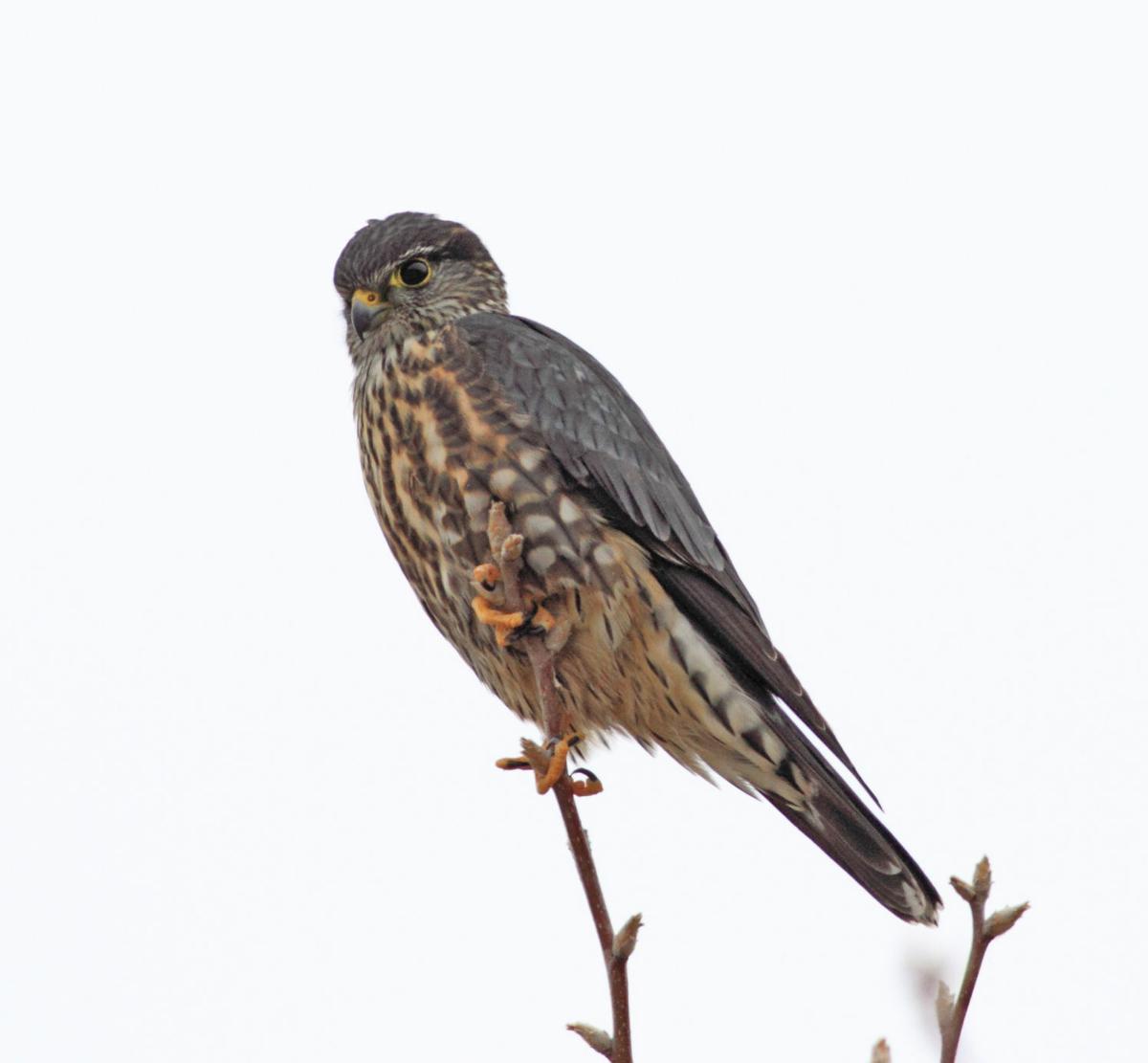 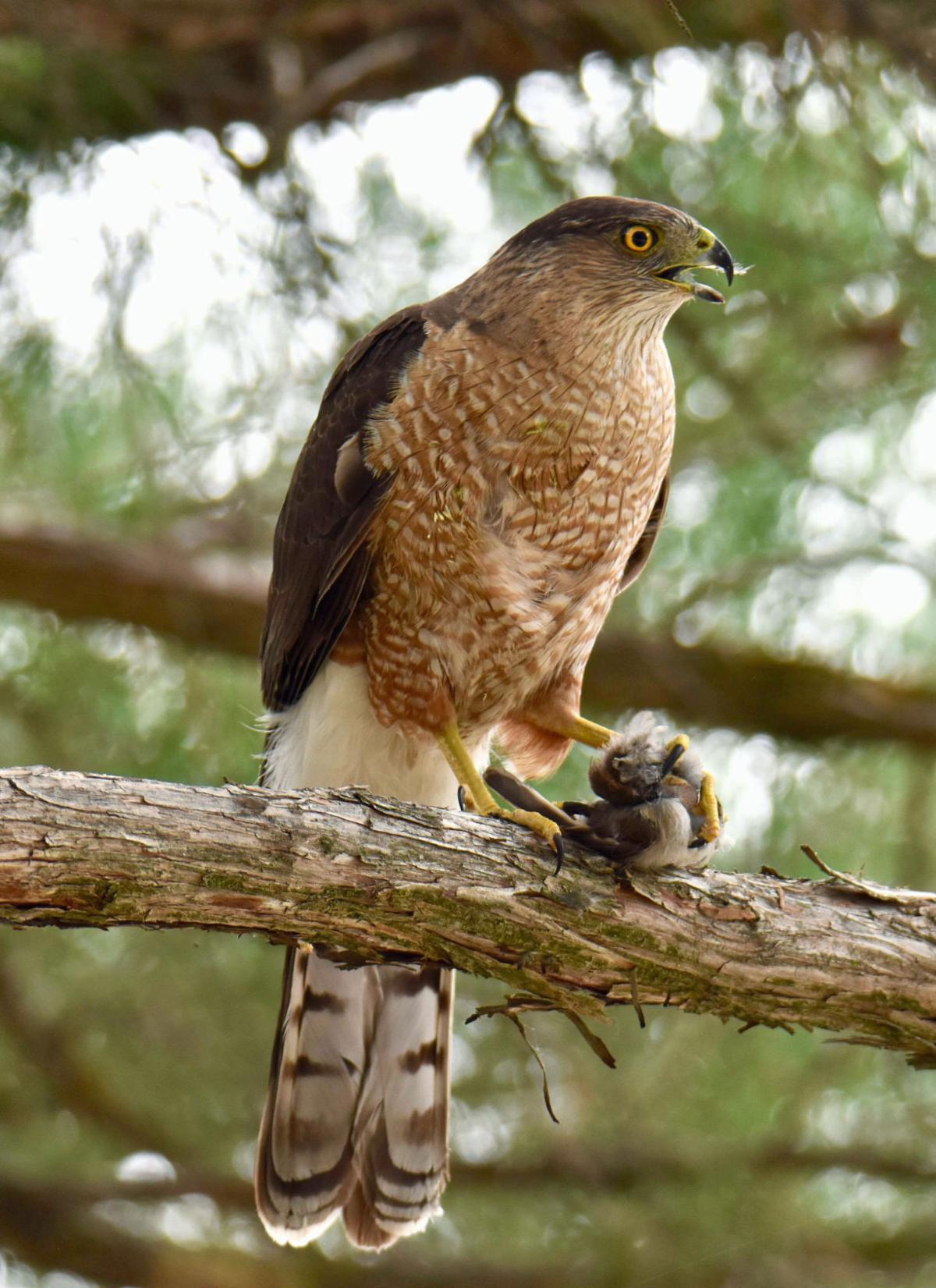 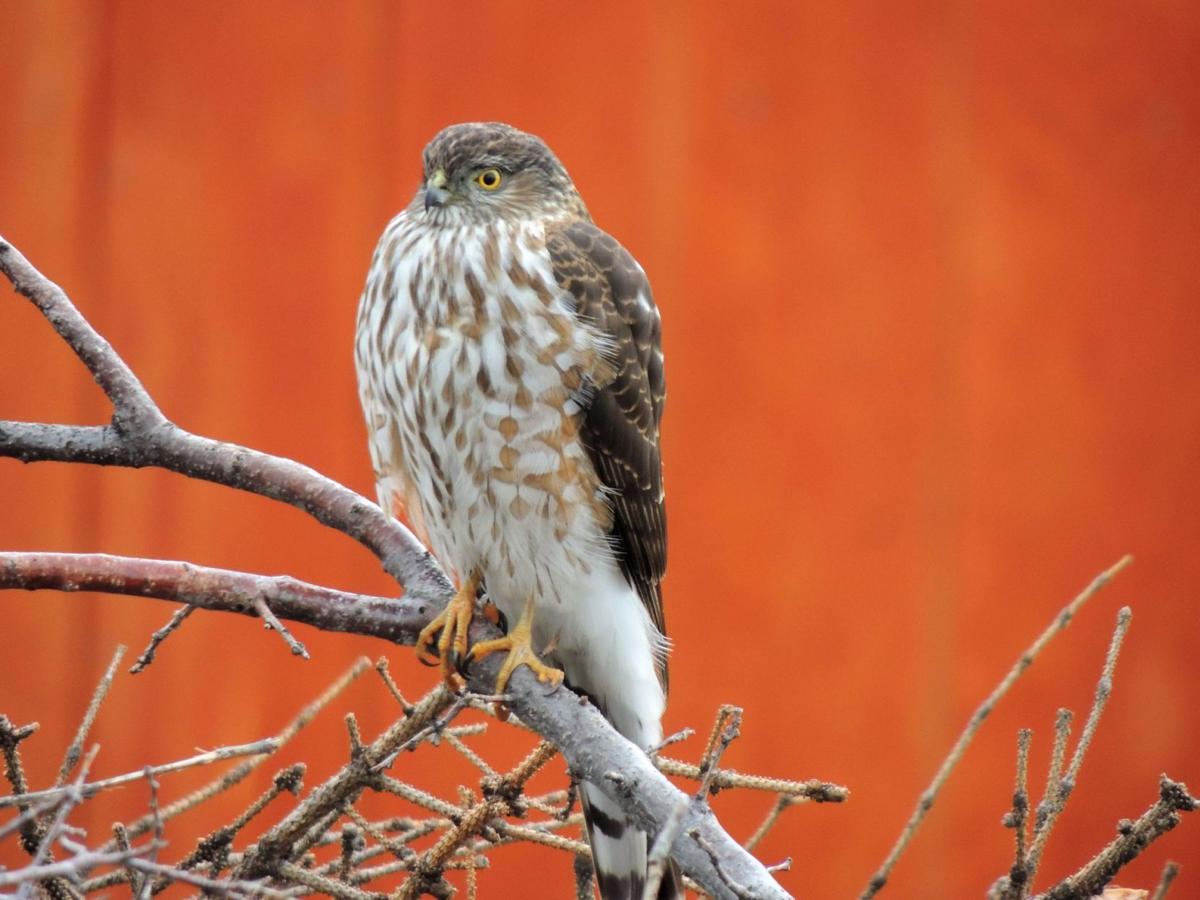 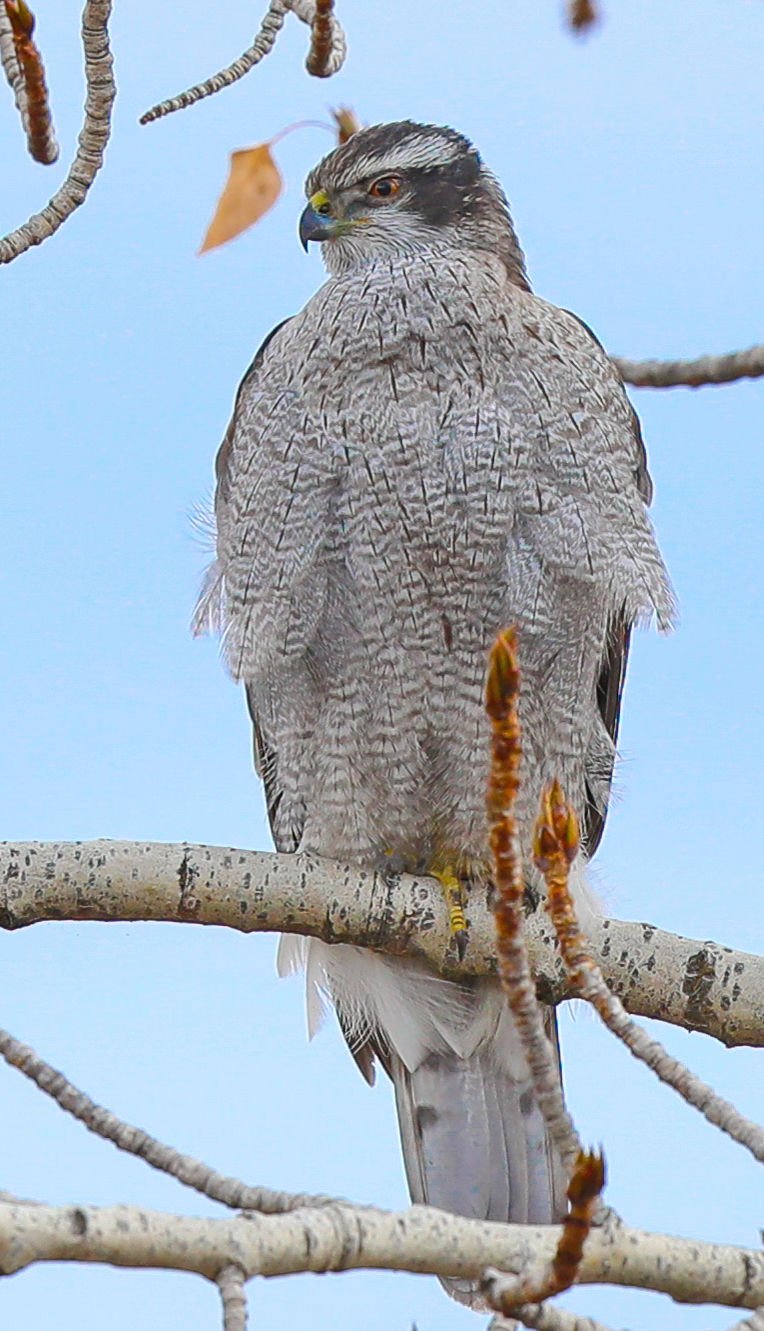 It doesn’t seem quite right that some birds eat other birds. I’m not sure why that strikes me as slightly off kilter. Maybe it’s just me. Mammals (us) eat mammals (cow), fish (salmon) eat fish (herring), reptiles (alligators) eat reptiles (turtles), and amphibians (bullfrogs) eat amphibians (other frogs). By the way, like us, bullfrogs eat just about every other thing out there. If a bullfrog can get it in its mouth, down it goes.

Some birds eat birds opportunistically. That is, they might prefer something else but if an easy bird presents itself, they’ll take it. Birds appear in the diet of every predatory bird in Idaho.

But some species have evolved to eat birds. They’re designed to pursue prey that are faster and more evasive than, say, ground squirrels. Design features for this ability include short, broad wings that provide for quick acceleration and don’t get stuck in dense branches. They also have long tails that allow them to change directions quickly and maneuver deftly after a fleeing junco.

The four bird specialists in Idaho include three accipiters and a falcon. The former are sharp-shinned hawk, Cooper’s hawk, and northern goshawk. The lone falcon is the merlin.

The sharp-shinned hawk was #19 on the Project FeederWatch Top 25 birds in Idaho during the winter of 2018-2019. Cooper’s hawk was #21. Northern goshawks and merlins are rarer and don’t tend to come into our yards like sharpies and coops.

The bird feeders many of us tend across North America have been a boon to birds that like sunflower seeds and suet. My other columns on feeder birds go into more detail on chickadees, nuthatches, and other feeder birds.

But these same feeders have also aided the birds who eat birds. I usually notice when a sharpy or coop has come into my yard when I catch a glimpse of a fast, horizontal motion out the backyard window. They come in fast and low so as to surprise the seedeaters and grab one before it can get oriented to safe cover. This surprise tactic also sometimes causes a panicking bird to fly into a window, which may stun or kill it outright.

I’m guessing that most people who maintain seed feeders have photos of one of these predators sitting on a feeder or a fence. Around southwestern Idaho, Cooper’s hawks are the most common in winter yards. The FeederWatch rankings above are for all of Idaho, so some regions of the state obviously have many more sharpies than we do.

The third accipiter in this group, the northern goshawk, does not show up very often in the FeederWatch tallies. This may be because they are innately wilder, and don’t like people, cars, barking dogs, and houses.

But there is another good explanation, offered by Jay Carlisle of the Intermountain Bird Observatory. Goshawks are big – the size of a red-tailed hawk. Because most of the birds on our feeders, for example, juncos, house finches, and goldfinches, are not very big, they might not be worth the trouble. Goshawks may be thinking about a meal of ruffed or dusky grouse (like I am).

Another possibility is that maybe they can’t maneuver the tight spaces of our yards as well as the small accipiters. Diving over a fence, through the swing set, and around the upper deck to surprise a bird on the hanging feeder is not for every hawk.

Perhaps the similarly rare occurrence of merlins around feeders can inform us about goshawks as well. Here’s a small, fast falcon that can probably fly where it wants to. Because it is not that much bigger than many potential prey species eating sunflower seeds, it seems that feeders would be perfect hunting grounds for this little rocket.

The fact that they are a rare feeder bird predator may also be because they don’t like the people, cars, and houses any more than goshawks do. Many species of wildlife obviously don’t want anything to do with people. But they certainly are around the Treasure Valley in winter. I see them frequently – much more often than I see northern goshawks.

Bruce Haak, a local expert on merlins, says merlins prefer to come in at high speeds in more open spaces to nail prey. Merlins perch in the tops of trees, scanning open spaces like pastures or large park-like areas around schools for unwary birds at a distance. They use long-range, high-speed attacks to capture prey, often right out of the treetops.

Perhaps we can learn something more about these species by examining FeederWatch data for other parts of North America. Looking at states along the U.S. — Canada border, none of these species are in the top 25, except in New York, where Cooper’s hawk comes in at No. 25. I would have expected more merlins along the northern tier of states because these are closest to the merlin’s broad breeding range across the Boreal Forest.

The lack of goshawks and merlins in Montana, North Dakota, and Maine — states with sparse populations and lots of open space — suggests that it’s not just people that are keeping these raptors away from feeders.

How about just checking the other Rocky Mountain states? Cooper’s hawk shows up in the top 25 in Colorado, New Mexico, Nevada, and Arizona. Sharp-shinned hawks make this list in Utah, Nevada, and Wyoming. But neither goshawks nor merlins make the cut. Note that among all the states examined, only Nevada has both coops and sharpies in the top 25, as Idaho does.

How about population sizes? Maybe there are just more coops and sharpies. According to the Partners in Flight Population Estimates Database, there are 210,000 northern goshawks, 410,000 sharp-shinned hawks, 840,000 Cooper’s hawks, and 1,600,000 merlins in North America.

These numbers do align pretty well for the accipiters, but they are way out of line for merlins. Based only on population size, there should be far more merlins showing up to eat our house finches.

Another possible explanation is simply range. Maybe the winter ranges of these species don’t include areas where people are feeding birds. It turns out that all four species are widespread in winter. You can view their range maps at All About Birds.

But the year-round ranges are more interesting. Cooper’s hawks are more widespread all year across the entire U.S. than the other three species That fact, combined with the larger population size of this species, might explain their more frequent appearance in top 25 lists.

There are other sources of data that could contribute to these musings. And if you like to explore knowledge, craft hypotheses, and then spend a few years outdoors collecting data, Boise State has an MS in Raptor Biology that can support and structure your curiosity!

One of the ornithological societies that you can join is dedicated to raptors – the Raptor Research Foundation (RRF). Membership gets you their journal, The Journal of Raptor Research, where you can find that latest science on this group of birds. Even better, the next annual meeting of the RRF will be in Boise on October 8-14, 2021, assuming we’re back to normal by then. This conference is a joint meeting with the Neotropical Raptor Network, so the presentations are going to be awesome. Don’t miss it!