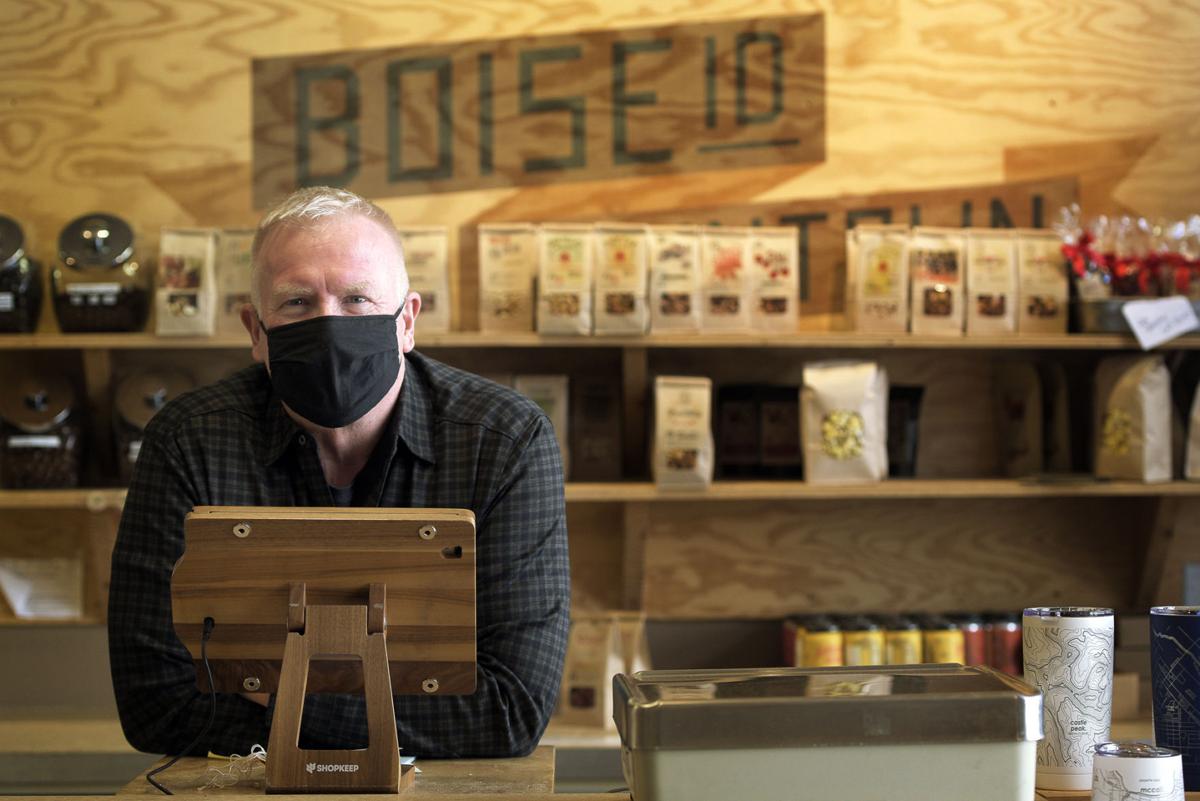 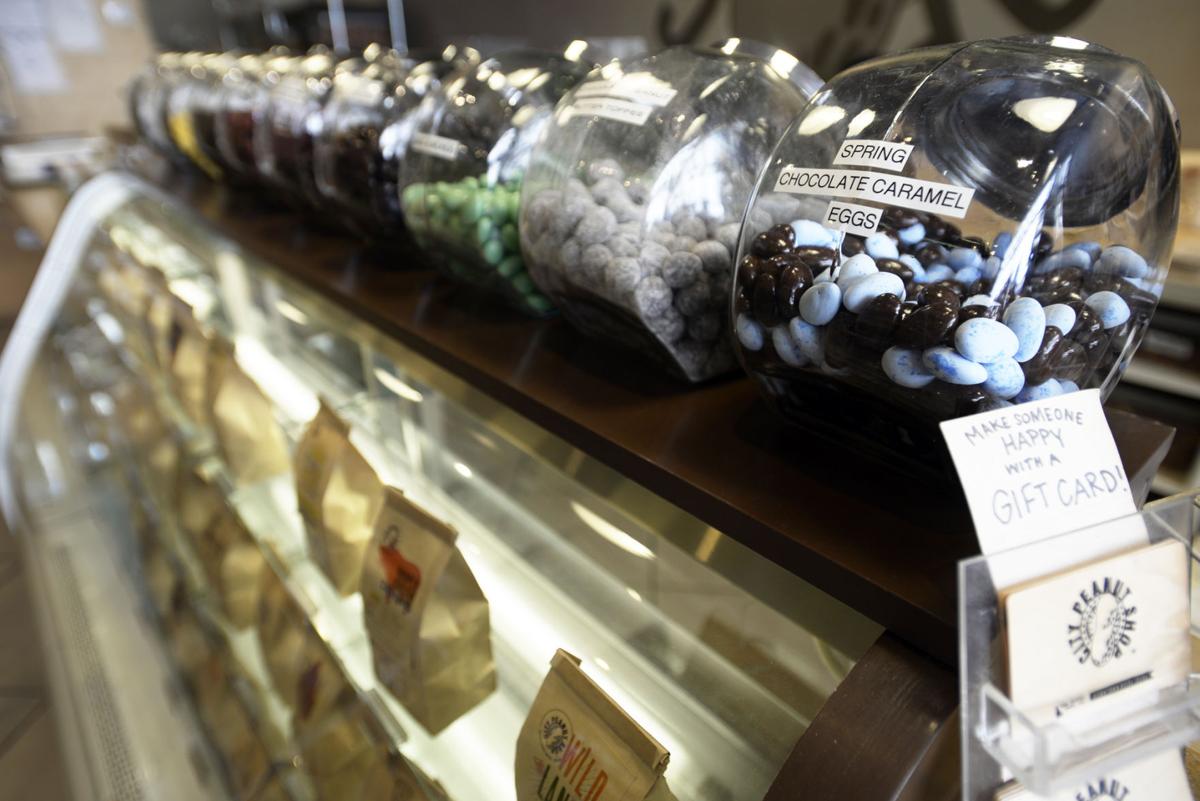 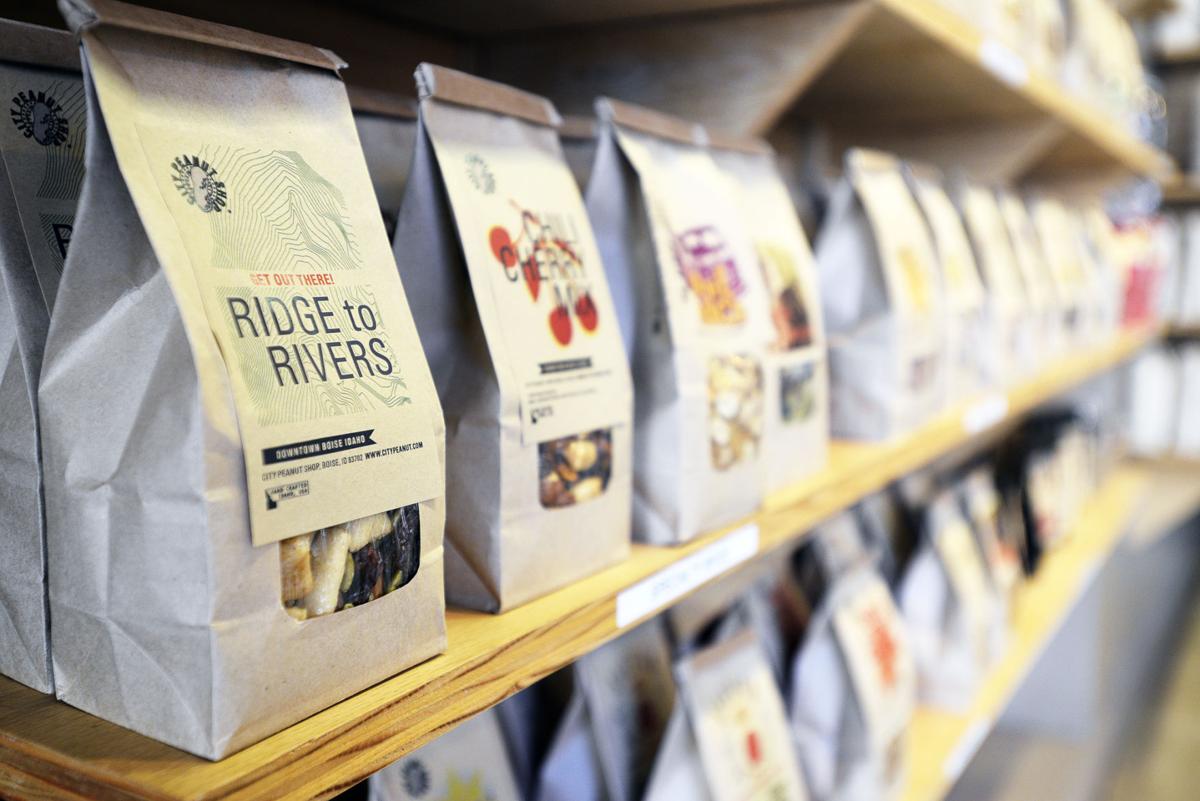 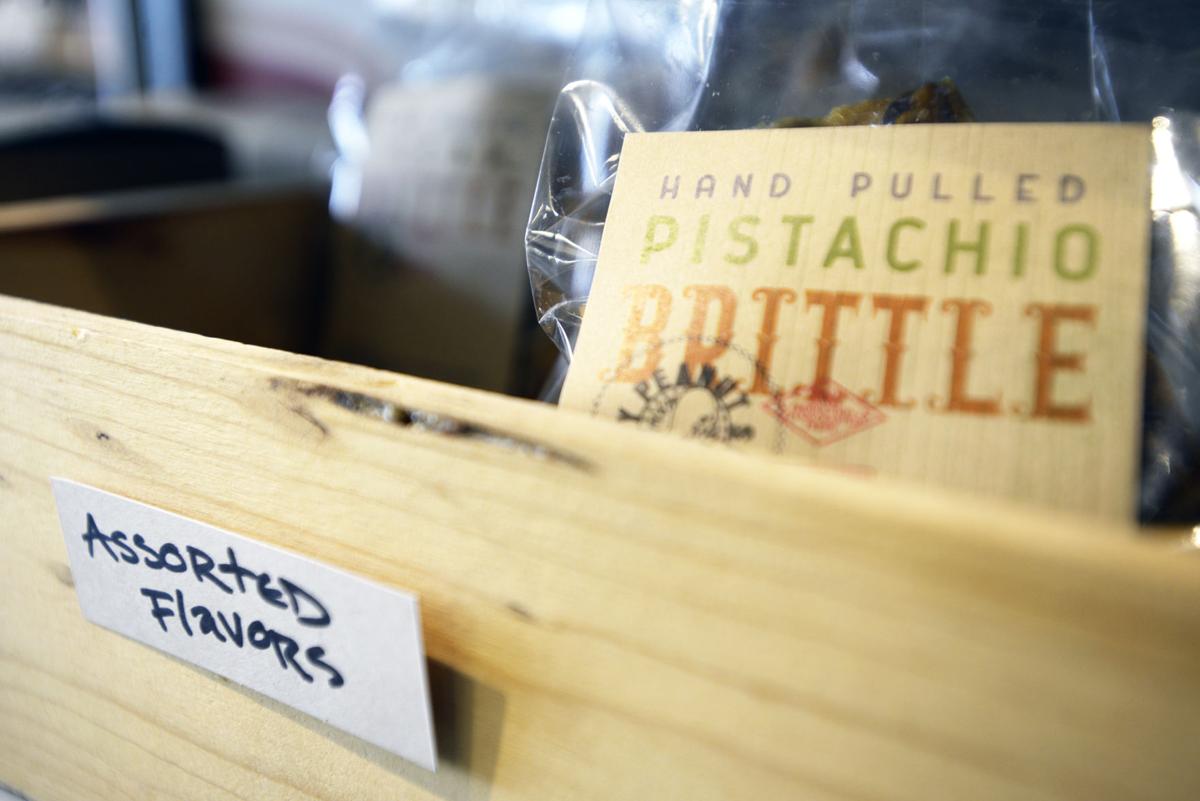 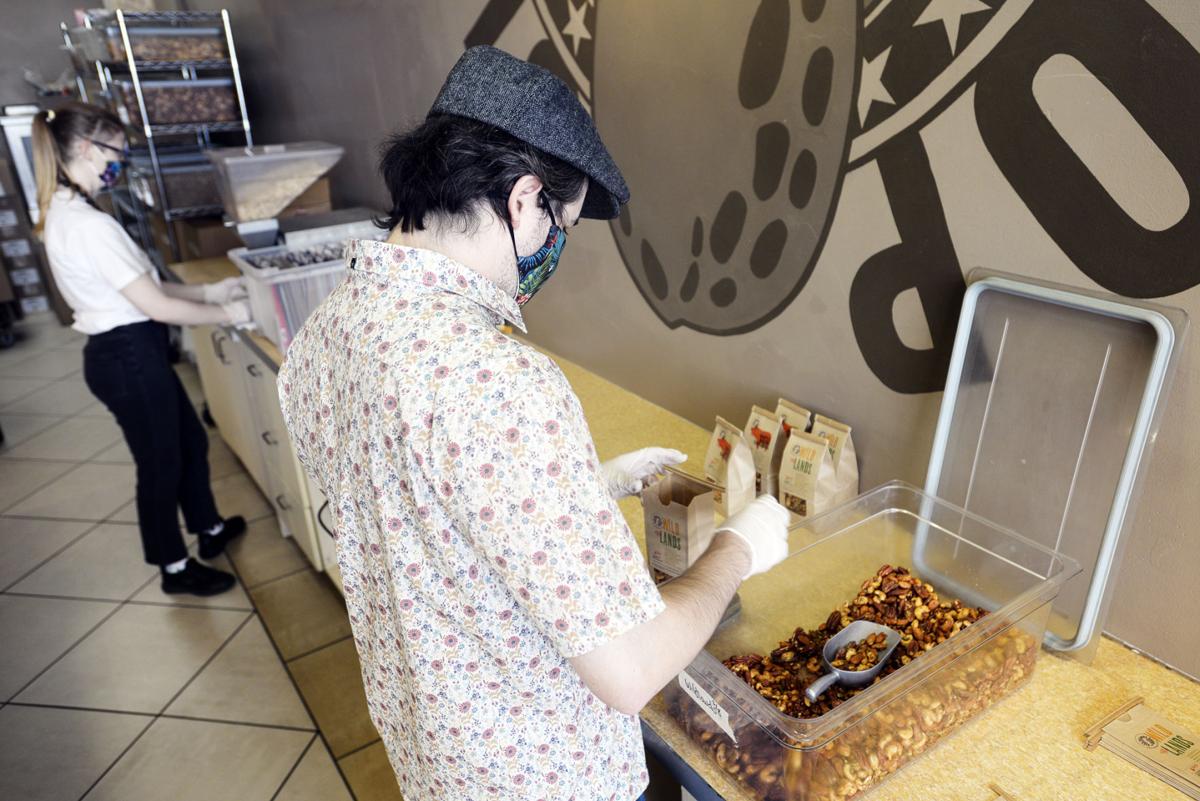 Employees at City Peanut Shop in Boise prepare and package different blends of nuts for sale at the store on Thursday, March 4, 2021. 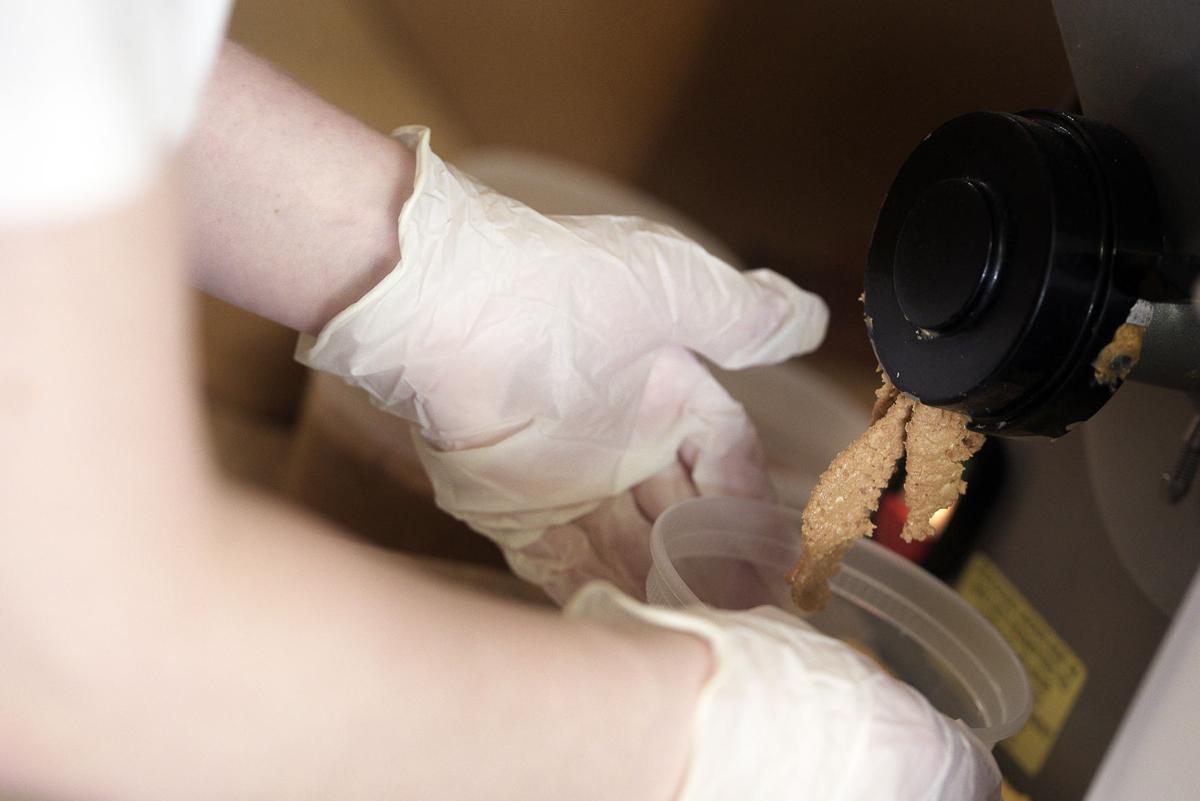 Employees at City Peanut Shop in Boise grind peanuts into all-natural peanut butter for sale at the store on Thursday, March 4, 2021. 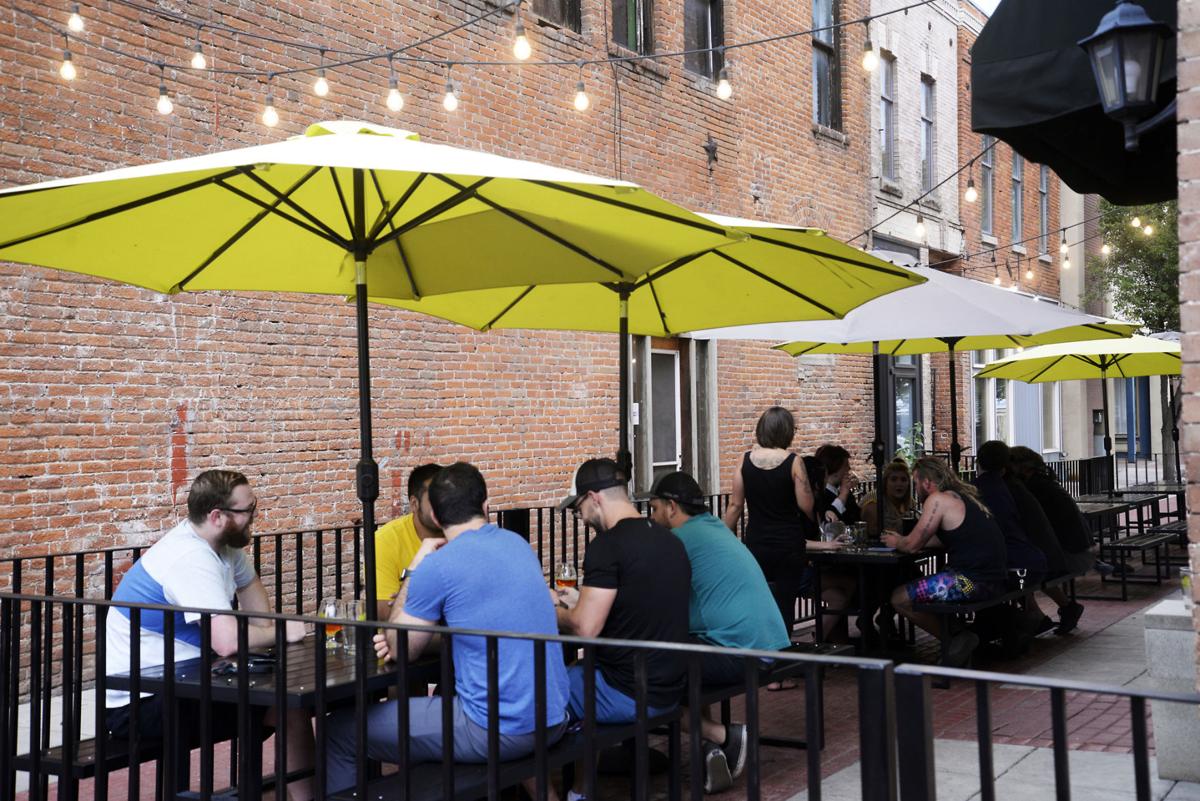 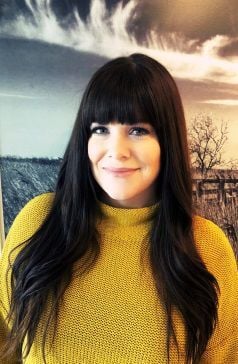 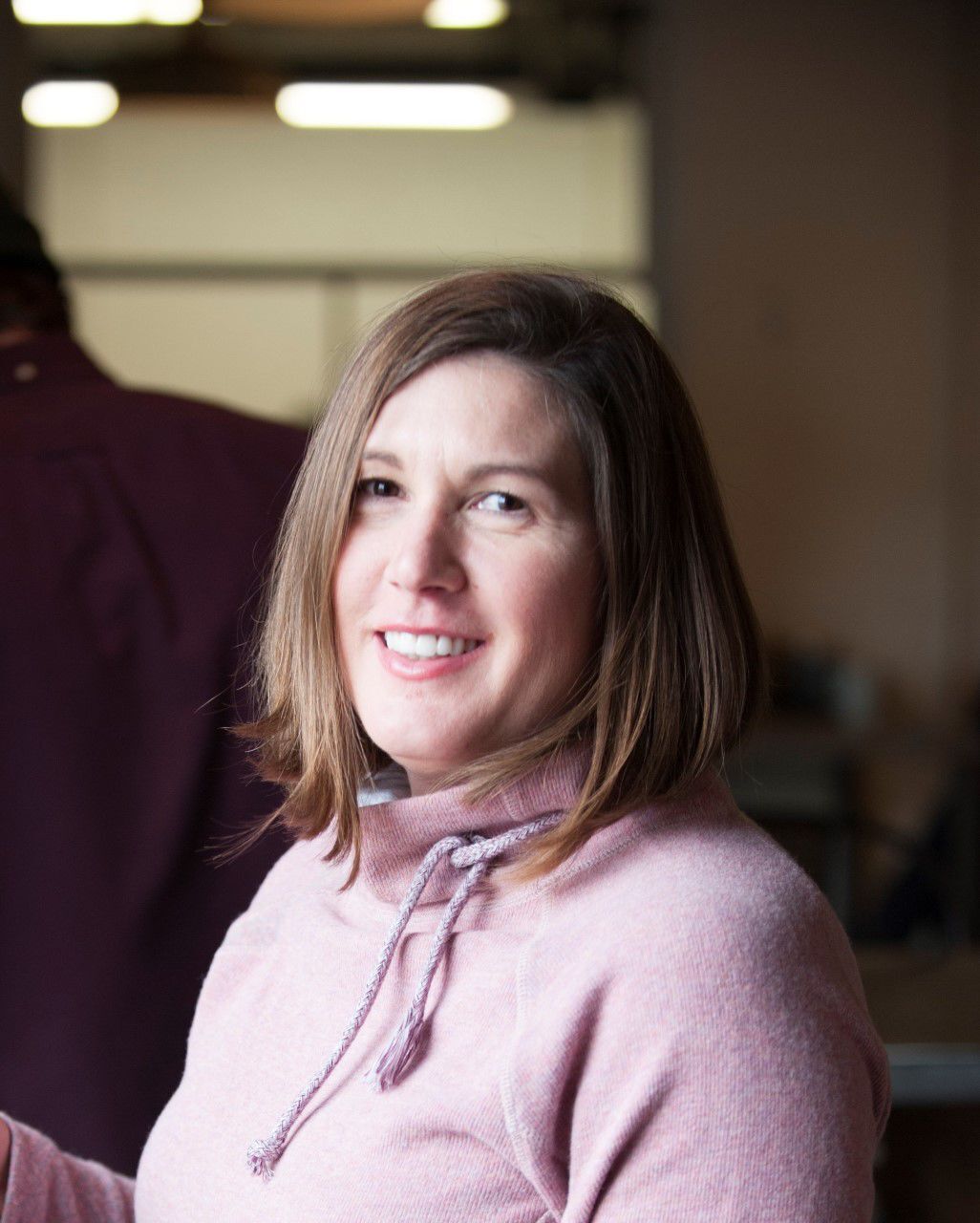 Employees at City Peanut Shop in Boise prepare and package different blends of nuts for sale at the store on Thursday, March 4, 2021.

Employees at City Peanut Shop in Boise grind peanuts into all-natural peanut butter for sale at the store on Thursday, March 4, 2021.

BOISE — The array of products sold at City Peanut Shop in downtown Boise leaves no doubt that this is a local business.

Dan Balluff, who owns City Peanut Shop with his wife, Sue Balluff, said local businesses "reflect the values and the culture of a community."

"Without us, you start to become anywhere U.S.A.," Dan Balluff said. "I think it's part of my responsibility as a small business owner to represent Boise. We're not only marketing ourselves, but we're also marketing the community and the city."

City Peanut Shop is a member of Buy Idaho, a statewide not-for-profit that advocates for Idaho's 57,000 local businesses. Funded by its roughly 1,500 members, Buy Idaho educates consumers on the benefits of shopping locally, Executive Director Jennifer Mauk said. It also hosts events, such as Buy Idaho Day, an annual celebration of local businesses, happening this year on May 8.

"Each neighborhood, each city, each district has … Main Streets, but each one has its own specific flair based on the uniqueness of the area," Mauk said. "In order to keep that, it's imperative that those mom-and-pop shops stay open."

"That's our tax base," she said. "That's what builds our roads, our schools, (and funds) our first responders. It helps keep our communities safe and eclectic and unique."

That recirculation rate may be even higher for local restaurants, specifically. For every dollar spent at an independent restaurant, 90 cents returns to the local economy in rents and wages and to suppliers, according to Katie Baker, executive director of FARE Idaho, an independent food and beverage advocacy group. Those suppliers include wineries, breweries, farmers, ranchers and bakers, who also reap the benefits of money spent at a local restaurant or bar.

"Independent restaurants provide support for Idaho's 21,700 small farms," Baker said in an email. "This summer I witnessed farmers drop off sun ripened, freshly picked tomatoes, and brewers are bringing in kegs through the back door of independent restaurants. It's been great to better understand the supportive food framework by seeing it firsthand."

Baker added, "Above and beyond sourcing products, local restaurants keep local staff employed, support community causes and are vested partners in the community they serve."

Small businesses "play a major role in creating jobs which can in turn create backward and forward linkage opportunities in their communities," Islam said. "Next, every dollar spent on local businesses have a multiplier effect, part of which may remain local which has an obvious impact on local tax base and purchasing power."

"Community relationships are important to them," Islam said. "They may also be more supportive of their employees (on a more flexible work schedule, for example). Studies have found that local businesses are more engaged with their community and engage in more charitable contributions that benefit their local area compared to regional/national chains."

Dan Balluff, who opened City Peanut Shop more than a decade ago after retiring from the tech industry, said local businesses thrive by working together. Local business owners tend to show each other loyalty and buy from each other whenever they can, he said. Payette Brewing Company was one of City Peanut Shop's first partners. The legume shop has collaborated with most of the breweries in Idaho, Balluff said, as well as restaurants — Fork, Alavita, Willow Creek, Solid Grill and Bar — and other local food and beverage producers, such Garden City's MFT Sauce and Rub Company.

"Small businesses in Boise work together, they don't work against each other," Balluff said.

Independent businesses play another distinctive role: hiring and training young workers. Among City Peanut Shop's 10 or so employees many have been college students and others working for the first time.

"We try to take care of our own folks," Balluff said. "I've hired a ton of young people, given them their first job and their first opportunity to learn how to work hard, how to be on time, how to behave at work, how to work with customers, how to build their confidence for the next step in their lives."

One study, by economists at Yale University and University of Bristol, found that when unemployment is high — such as it is today, due to a recession caused by the novel coronavirus pandemic — small businesses retain and create more jobs than large firms do.

“Large employers on net destroy proportionally more jobs relative to small employers when unemployment is above trend, late in and right after a typical recession” the economists wrote. “Overall, this picture corroborates in part the common wisdom that small businesses are the engine of job creation: small firms appear to create more jobs as a fraction of their employment only when unemployment is high (which is, arguably, when jobs are most needed).”

While the pandemic forced many Idaho businesses to close, especially in the food and beverage sector, the number of Idaho-owned business actually has grown in the last year, Mauk said. This year, a new gay bar, Somewhere Bar, opened in Garden City. Mother Earth Brew Co., which was founded in California and expanded to Nampa in 2016, plans to open its first Idaho tasting room in downtown Boise. Coned Pizza, a Meridian restaurant, has opened its second location, also in downtown Boise.

Balluff said chains had "financially backing to withstand the onslaught" of the pandemic. Other forces, high rents and an influx of new residents who may not be as loyal to local businesses, may allow chains and larger corporations to take a "stronger hold" on the community, he said. At the same time, some Boiseans will work extra hard to launch their own businesses, Balluff said.

"It's going to be harder and harder for small businesses to get established because they just can't do things as efficiently and make the margins that a large corporate franchise could do," he said. "The flip side of it is there's always a lot of people waiting in the wings to start their own small business. There's people that just have a dream."

Locally owned businesses provide unique benefits compared to chains and large corporations, but that doesn't mean the latter are detrimental to a local economy.

"Anybody that has a business in Idaho, mom-and-pop shops all the way up to the big corporate chains, they are contributing to our economy," Mauk said.

Amazon, the world's ninth-richest company by revenue, last year opened a distribution center in Nampa that's on track to employ 2,000 people. Some chains look to communities they serve for local products. At local franchises of the Cincinnati, Ohio-based Fred Meyer, for example, local wines identified with a "Buy Idaho" sticker are best-sellers, Mauk said.

Not only did Amazon withstand the onslaught of the pandemic but it saw financial gains — a $570 billion increase in market capitalization and a 63% spike in stock price — as many shoppers, forced to stay home, spent their money online. Islam suggests that's one of the benefits of large corporations: They're able to "weather the storm of a unique and rare event such as a pandemic," she said, and keep business churning. "They have economies of scale, they can diversify their risks, they have access to financing, they have a voice, they can influence policies," she said. When an Amazon warehouse hires 500 workers in Nampa, "those are local jobs that perhaps 50 small businesses would need to launch to equal."

"That is a Herculean endeavor for a local community during even a typical economic downturn," Islam said.

But large corporations also stifle the formation of new small businesses, and the increasing size of corporations is contributing to wealth inequality. As illustrated by Amazon's 2020 growth, some companies are reaping "unprecedented profits" from the pandemic, Islam said. "Many in the top 5% income bracket are reporting exponential growth in their net worth," while the "majority of the households below or around the pre-COVID poverty line get wiped out financially," she said.

It's the local businesses that "make it really special to be" in Idaho, Mauk said. Consumers have believed that as well during the pandemic, both Mauk and Balluff agreed. City Peanut Shop was staring down 20% revenue losses during the first three quarters of 2020, until shoppers made a "conscious effort" to shop local, Balluff said. By the end of the year, revenues were down just 4%.

Balluff is confident the coming months will be brighter for local businesses, especially hard-hit restaurants and bars, as the pandemic shows signs of subsiding.

"I know it was really tough for a lot of people," he said. "I think there's going to be such a pent-up demand that, if they can hold on, this will be a great year for them, eventually."

"Each neighborhood, each city, each district has Main Streets, but each one has its own specific flair based on the uniqueness of the area. In order to keep that, it's imperative that those mom-and-pop shops stay open."