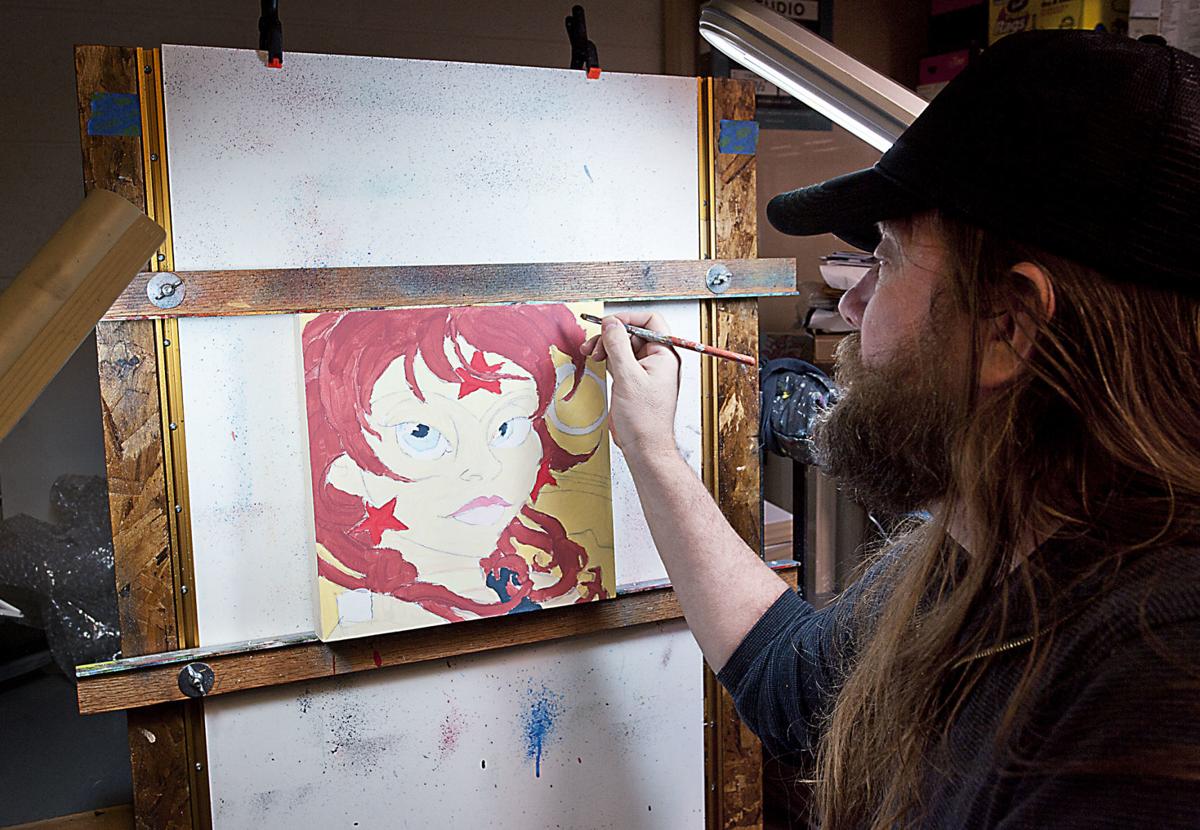 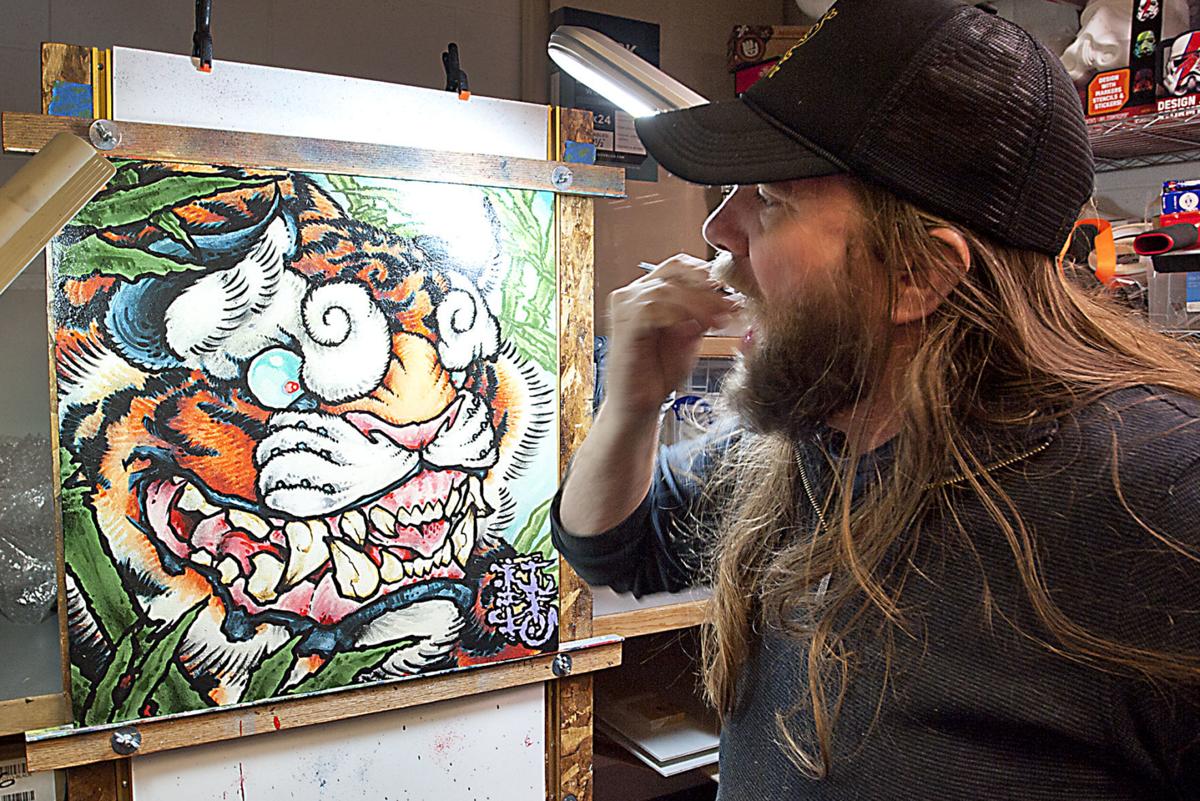 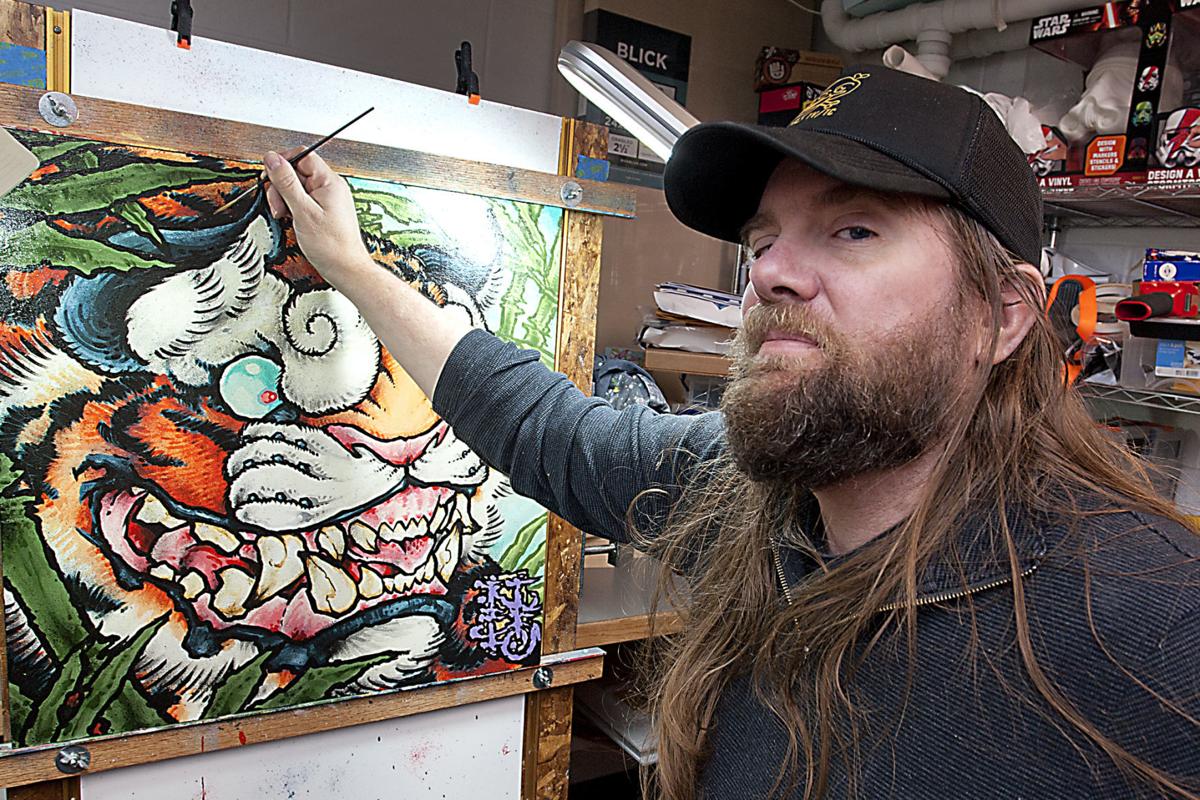 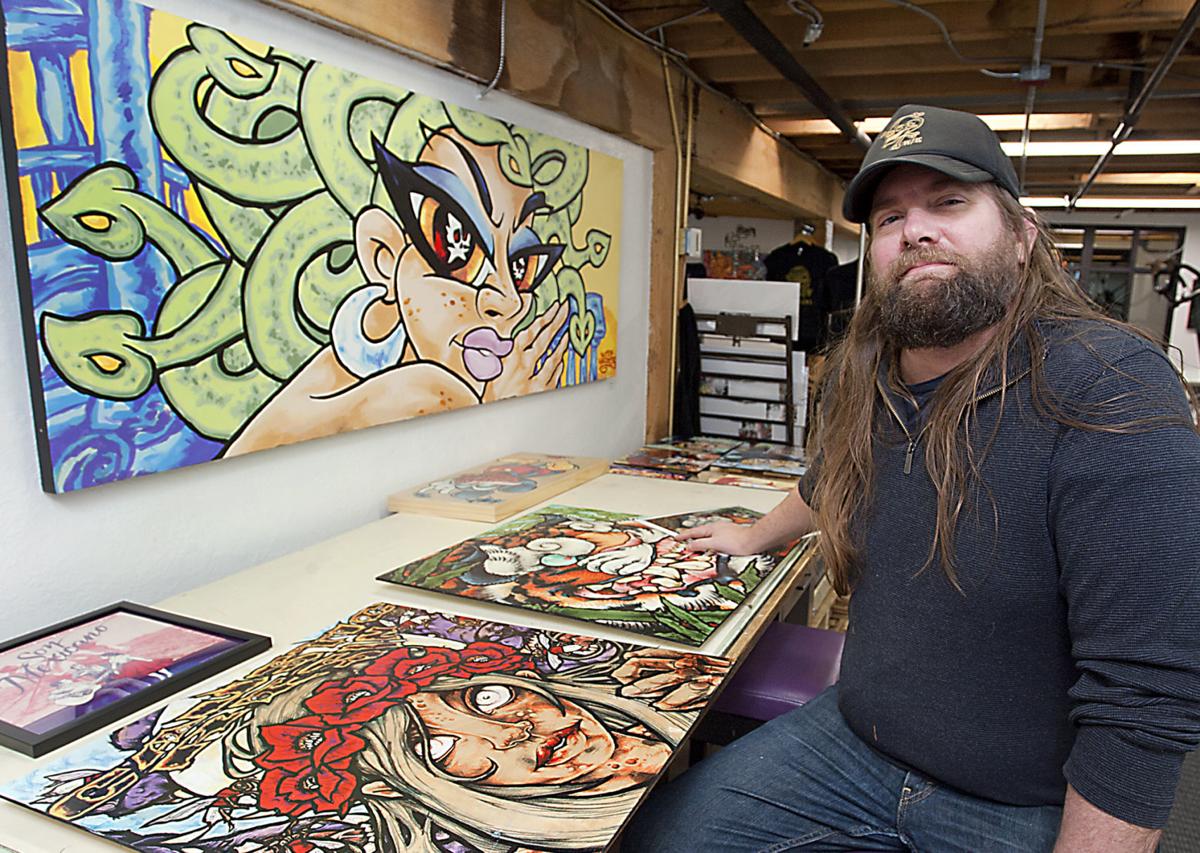 Contemporary artist Nobel Hardesty poses with a selection of past work in his downtown Boise studio, Tuesday, Feb. 12, 2019.

Contemporary artist Nobel Hardesty poses with a selection of past work in his downtown Boise studio, Tuesday, Feb. 12, 2019.

Pablo Picasso once said: “Every child is an artist. The problem is how to remain an artist once we grow up.”

Channeling child-like wonderment and a lifelong love for all things “taboo” is Noble Hardesty, a contemporary Boise artist influenced by the aesthetics of graffiti, tattoos, cartoons and comic books. He has been a part of the local art scene since the mid ‘90s. As online site Tasty Vomit described Hardesty’s work in a 2012 article: “Noble’s imagery is a mix of mythology and fiction teaming with heroes, girls, monkeys, metal album imagery and blazing color.”

While Hardesty’s influences were often known as “lowbrow” in the ‘90s when he got his start, the new nomenclature refers to this type of work as pop surrealism, a definitive PR makeover for the types of pop culture once considered verboten but now projecting people like street artist Banksy to new heights. Hardesty and several other artists cashed in on both this new popularity of their inspirations as well as the (surprisingly) many other artists in the Treasure Valley creating similar art to create Boise’s Swell Artist Collective, helping give Boise’s art scene what Hardesty describes as a “much-needed shot in the arm.”

Originally from Eureka, California, Hardesty has been drawing since he could hold a pencil. “Much to my parent’s chagrin, I was doing things I shouldn’t have been working on,” says Hardesty. “It was Saturday morning cartoons and comic books were forbidden so, of course, that became something I was very obsessed with.”

Hardesty found himself attracted to the more risqué comics like those of company Dark Horse or the comics "Spawn" and "Sin City."

“I was into things you would never see on the shelves,” says Hardesty. “In fact, I had to go to the comic book store and ask to get in the drawer of stuff they couldn’t have on display.”

In addition to comic books, the now 49-year-old artist found sources of creativity that would stay for him forever such as skateboarding and its associated culture, which would slowly turn into tattoo culture. Pink Floyd’s "The Wall" also came out when Hardesty was 12, a soundtrack and movie with visuals that have stayed with him to this day.

That attraction to the taboo has helped give Hardesty his reputation in Boise for being rough and edgy: Hardesty’s B.A.R.F. (Boiseans Against the River Festival) T-shirts, which thank visitors for “turning our city into a toilet” come to mind as one example as does Swell Collective’s events like Art Deck-O (featuring one-of-a-kind, artist-designed skatedecks) or the upcoming fourth annual “32 Cells: Rectime” done in conjunction with the Idaho Historical Society at the Idaho State Penitentiary where 32 pieces of art done by local artists and inspired by the origin stories of the prison’s inmates and guards are hung on prison cell doors for viewing.

Swell was formed in November 2015 by Hardesty, Stuart Holland and Cody Rutty, though Hardesty is now the sole owner. The membership-based artist collective promotes and curates contemporary art and artists through events, gallery shows and online exposure with the goal of creating a vibrant studio and artwork gallery environment open to the public and intent on helping bolster the community’s rapidly growing arts culture.

“There just wasn’t anything going on,” says Hardesty. “After the economy dumped around 2008, things kind of went south and took a long time to come back. Swell was one of the big things to bring it back. It was pretty dismal there for a little bit, even to the point where I took a break and started a T-shirt company and didn’t start painting again until 2010.”

As part of the criteria for artists to join the collective, the owners of Swell decided applicants had to have a website, social media presence, and real “skin in the game” as Hardesty describes it. “The internet changed everything in the art scene. You don’t have to live in a big city anymore, you just have to make sure you’re doing your due diligence and working on social media and getting your art out that way,” he says.

When the collective started, there were 50 artists, which surprised Hardesty and his fellow owners as they had no idea that there were 50 working, talented artists in Idaho, let alone the Treasure Valley. Hardesty has recently become the sole owner of Swell and shaved the number down to just 30 artists to simplify.

“We spent years throwing everything at the wall and this is what trickled down,” says Hardesty.

Hardesty exhibits at Swell, of course, but in addition to those group events at the collective he also does plenty of solo work and has exhibited at The Modern Hotel, Visual Arts Collective, State & Lemp, Flying M Coffee House, J Crist Gallery, Basement Gallery, Boise State University and Boise City Airport, all in Boise, as well as the Flatiron Building in Chicago, Hall Gallery in Portland, and CSUF Grand Central Art Center in Santa Ana, California.

His bright paintings start as what looks akin to a large-scale, “paint-by-numbers” and ends up becoming a full canvas splashed with color and an assemblage of images that are almost like looking at a full-sleeve tattoo on a person’s arm. With collection titles like “Turning Japanese,” “Bloodwork,” and “Fan Boy,” it’s easy to see that, even at close to 50 years old, Hardesty is still championing the boy inside him. Hardesty’s studio, which is also where he runs Swell, is in BoDo.

The artist describes himself as a “kind of 9-to-5 guy,” listening to podcasts (he’s 75 percent sure he wants to start his own) as well as music like the latest Cypress Hill album "Elephants on Acid," Claypool Lennon Delirium, All Them Witches, and Uncle Acid & the Deadbeats while he works.

After doing two or three gallery shows a year for the last several, Hardesty has decided to take a year off to “recharge the batteries” and work on the ultimate project: turning 50.

The artist plans to incorporate all of his past influences — such as "The Wall" which turns 40 in November of this year — into something big. But what exactly it will culminate in, he doesn’t say. Whatever the result, it is sure to be quintessentially Hardesty: risqué, bright, raw, and, suffice it to say, lowbrow in the best of ways.