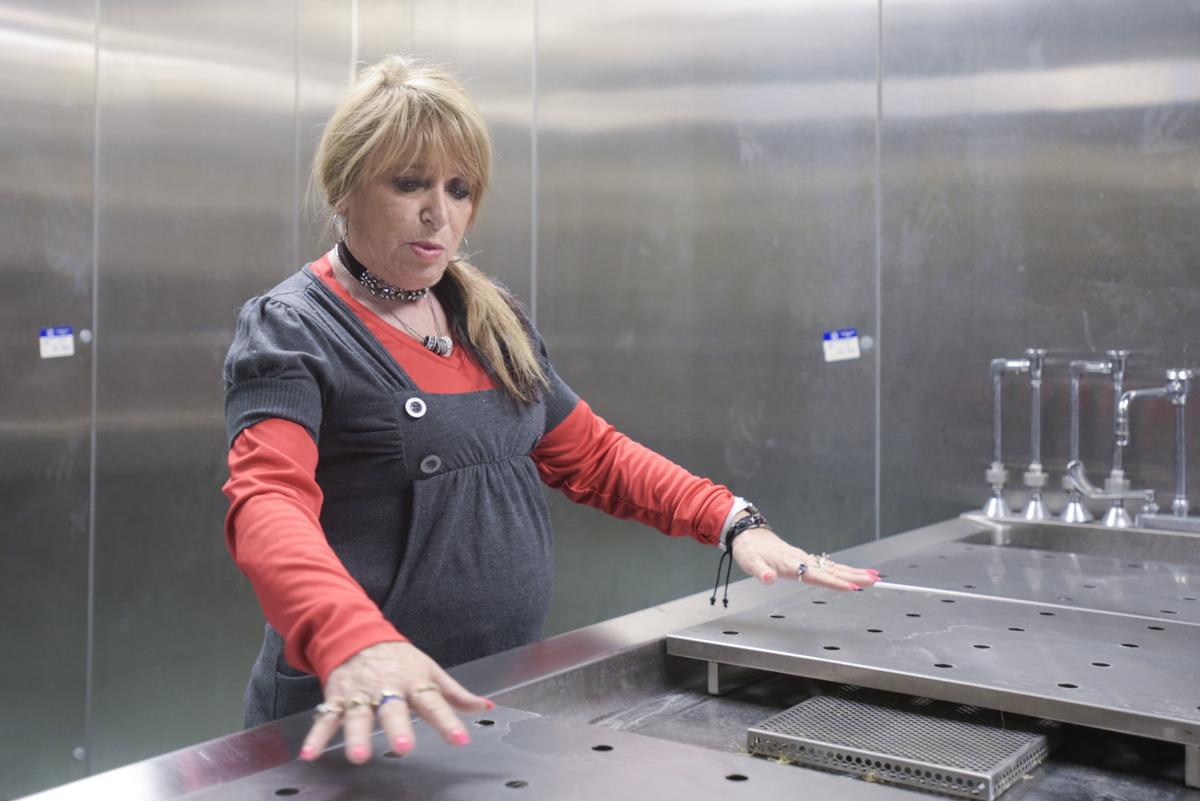 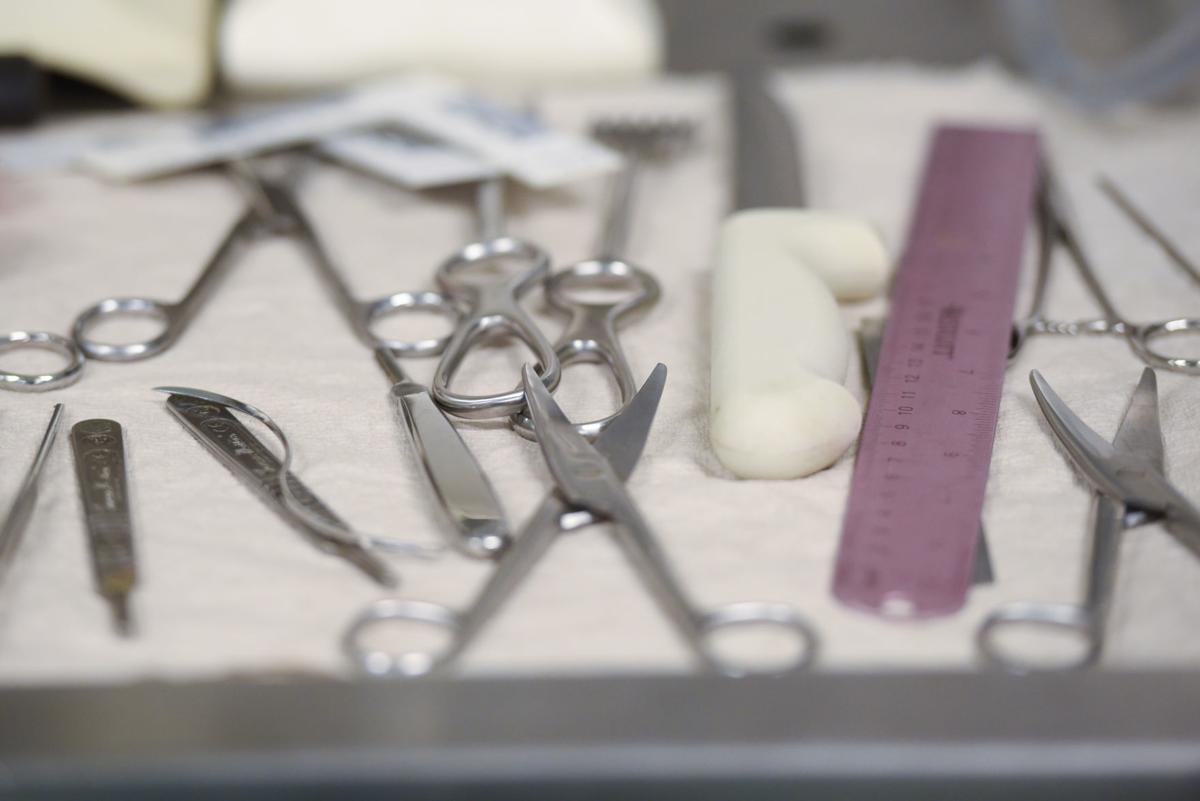 These tools are used to conduct an autopsy at the Canyon County Coroner's Office in Caldwell. 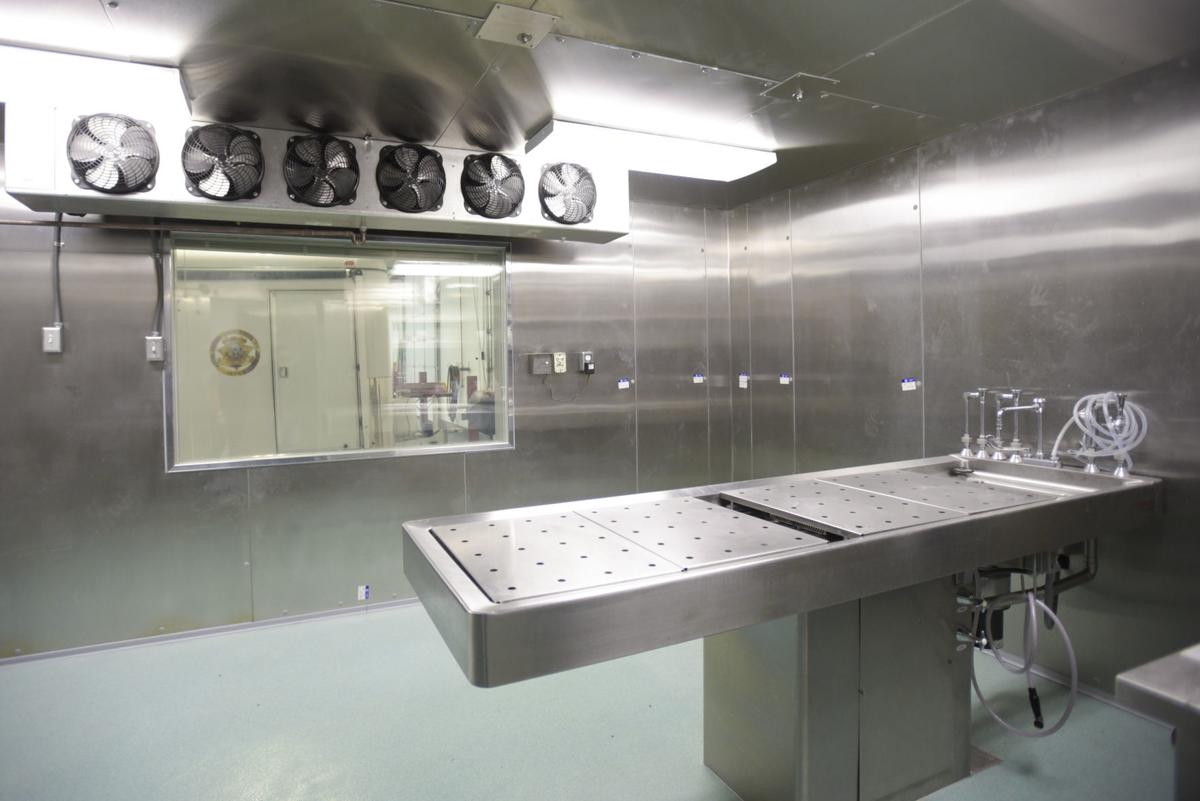 This autopsy room is equipped with specialized centralization and equipment designed to perform an autopsy on a decomposing body. 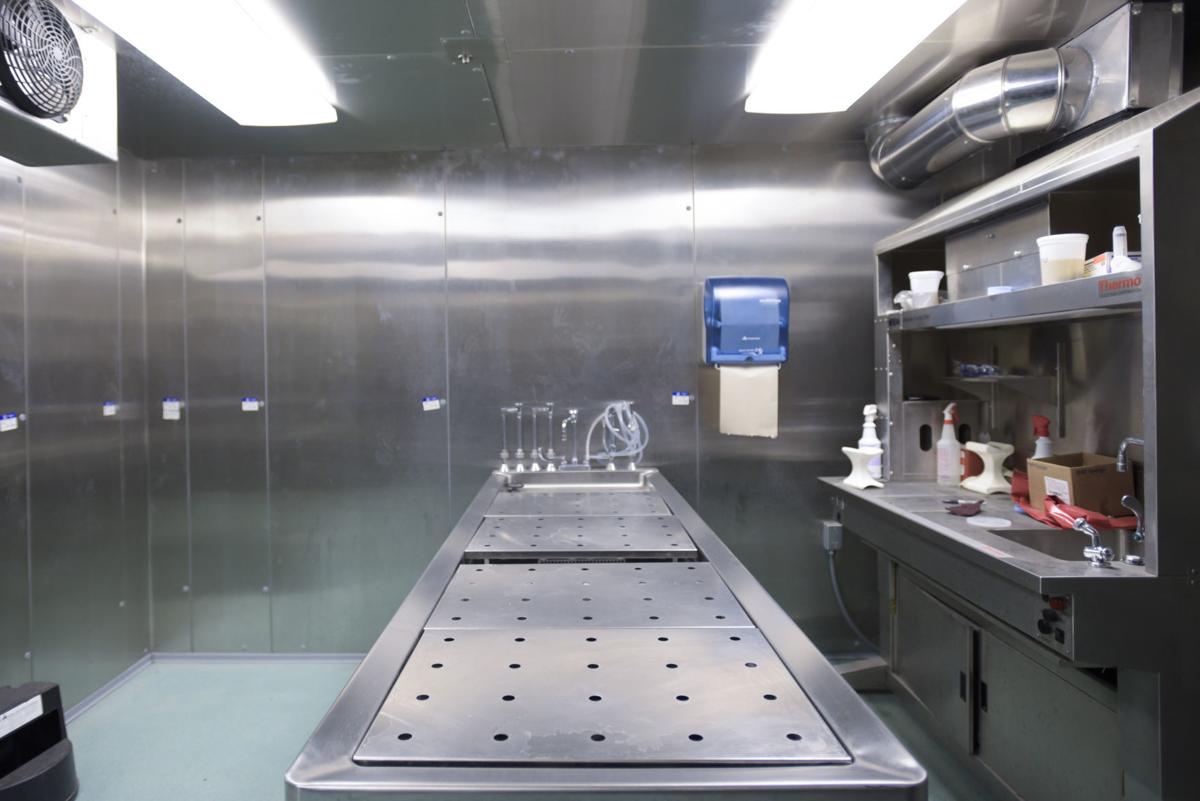 An autopsy table is setup at the Canyon County Coroner office in Caldwell. 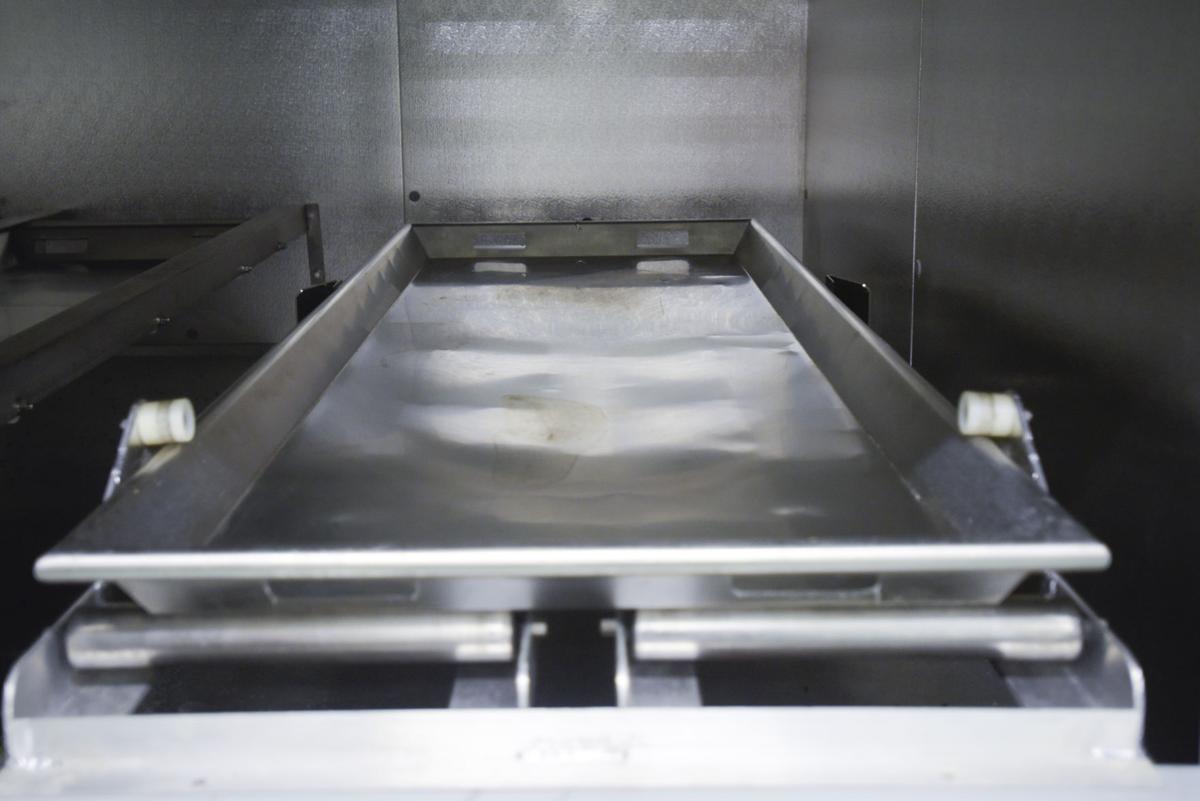 A sliding rail system allows for bodies to be stored in refrigerated units at the Canyon County Coroner’s Office in Caldwell. 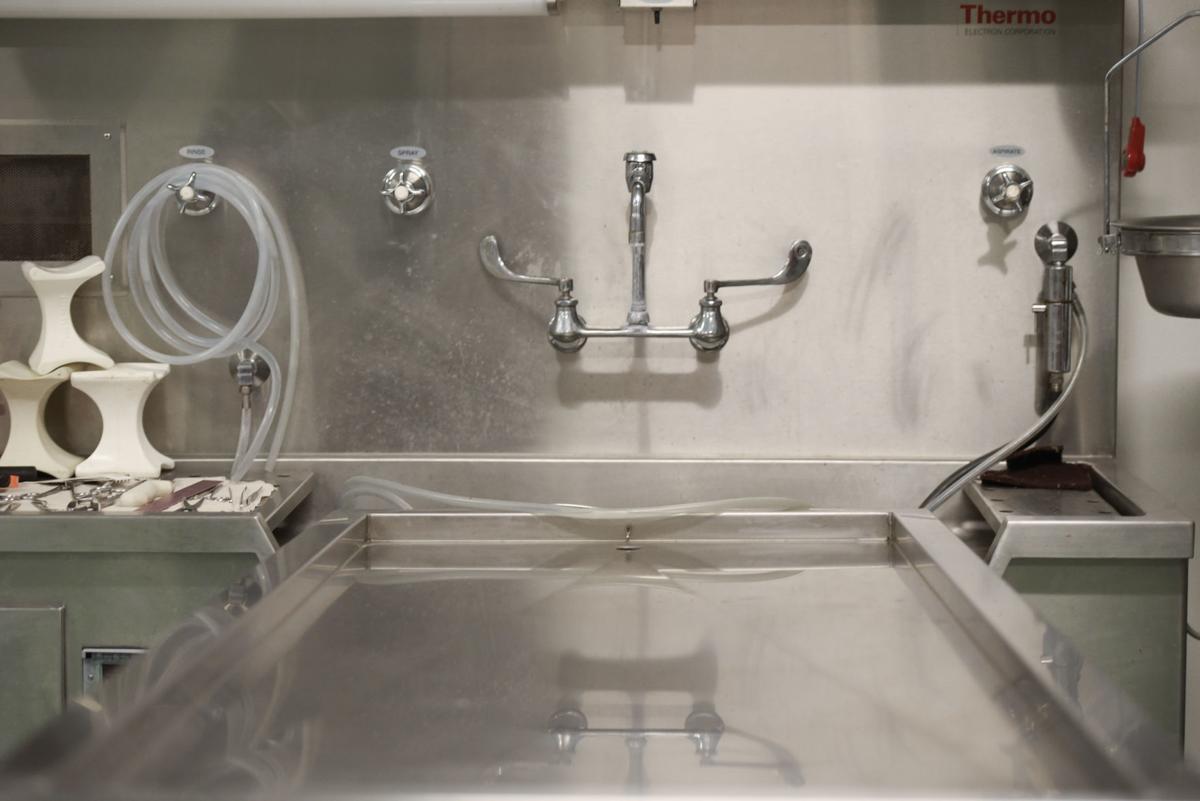 A view looking at a table to conduct autopsies at the Canyon County Coroner's Office in Caldwell. 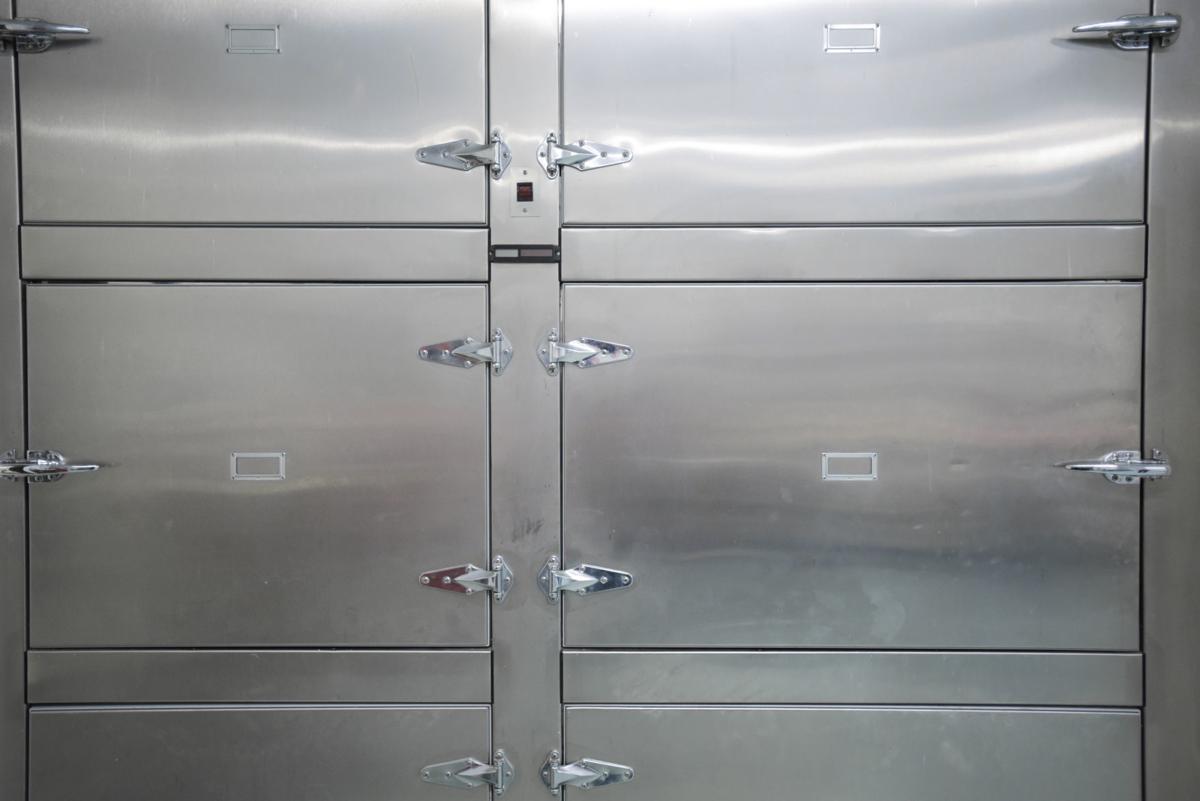 These tools are used to conduct an autopsy at the Canyon County Coroner's Office in Caldwell.

This autopsy room is equipped with specialized centralization and equipment designed to perform an autopsy on a decomposing body.

An autopsy table is setup at the Canyon County Coroner office in Caldwell.

A sliding rail system allows for bodies to be stored in refrigerated units at the Canyon County Coroner’s Office in Caldwell.

A view looking at a table to conduct autopsies at the Canyon County Coroner's Office in Caldwell.

Coroners would not be wise to show up to a crime scene in their nicest clothes, hair fixed, and not expect something to get ruined.

According to Idaho state code, coroners are to investigate deaths that were a result of violent, suspicious or unknown circumstances.

In addition to investigating deaths, coroners perform autopsies and respond to crime scenes. Though not required, coroners are sometimes the ones to remove bodies from crime scenes and notify family of the death.

“I know it’s tough to say I love my job, but I do,” she said. “I love helping families and working with law enforcement and investigators.”

Her vehicle is packed with anything she might possibly need — snow boots, warm coats, beanies, water.

DeGeus-Morris has been waist deep in mud responding to the scene of a tractor tipped in a ditch. She has worked cases involving bodies found along the river, which have sometimes been left for weeks or months.

“Those are probably the worst,” she said.

Once she responded to the scene of a death on Pickle Butte in Caldwell with a lightning storm directly overhead. Coroners have to weather the elements no matter what the circumstances. They work in 100-degree heat to below-freezing temperatures.

Coroners are also exposed to numerous airborne illnesses. And because they respond to many bloody scenes, being cautious of Hepatitis C and HIV is important.

But DeGeus-Morris said coroners can’t pick their environment — the environment picks them. About 90 percent of the job, she estimates, is spent outside of the office responding to scenes.

Over the years, DeGeus-Morris has grown used to working with bodies. But no amount of experience, she said, has gotten her used to the sights and smells at fatal crime scenes. And it never gets easier to notify family members of a death or respond to cases involving children.

“There are no words for that,” she said.

Leaving work at work can be difficult for a coroner because of calls to a scene in the middle of the night. A regular shift is not something DeGeus-Morris said coroners are accustomed to. She is on call four days a week. On her days off, she gets woken up by alerts of the other deputy coroners responding to deaths anyway.

The four coroners in the office are “one big therapy group,” which helps, too, she said.

In the summers, DeGeus-Morris especially loves relieving stress by riding her motorcycle.

The job isn’t just about responding to scenes with deaths, it’s about performing autopsies on bodies to determine causes of death.

Autopsies are almost like performing surgery, DeGeus-Morris said, but there is no heartbeat. And instead of fixing something, she searches for bullets, among other things.

No one autopsy is ever alike, she said. Burned bodies or bodies that have been in the water for extended periods of time are autopsied in a room with a ventilation system.

Autopsies typically take about an hour. But autopsies for homicides are much more detailed and end up taking upwards of five hours, she said. The cause of death may be obvious, but in these types of investigations, every other cause of death must be ruled out.

The most common deaths she sees are from natural causes, but DeGeus-Morris said homicide deaths are increasing.

The volume of dead bodies coroners deal with continues to rise along with the population growth in Canyon County. When DeGeus-Morris first started as a coroner about 30 years ago, there were two employees who worked through 100 cases in a year. In 2017, with four coroners, they worked through 1,042 bodies, she said.

In between responding to crime scenes, notifying families and performing autopsies, DeGeus-Morris does public outreach informing teenagers about hazards and choosing to be responsible. Many deaths can be prevented, she said, it just takes education.

“I want to talk people into living,” she said.

DeGeus-Morris became a coroner during a time when women didn’t do the job.

It was 1985, and when she told previous Canyon County Sheriff Dale Haile she wanted to be a coroner, she said he laughed and said “women can’t be coroners."

In 1988, however, DeGeus-Morris became a full-time coroner. Two years later, she was elected Canyon County coroner.

Previously she was a full-time dispatcher. She witnessed an incident she believed was handled improperly when a coroner notified a family member of a loved one's death. Basically, the coroner told the wife that if she had been watching her husband drive away out their house window, she would have witnessed the crash and been able to save him. If she had, "he probably wouldn’t be dead,” she said the coroner told the widow.

DeGeus-Morris was appalled by the comment and believed she could do a better job.

“It’s all about family,” she said. “Can’t treat them like a statistic.”

After three decades on the job, talking to families about a death is still painful for DeGeus-Morris. She doesn't see that as a bad thing.

“When you walk away and still hurt, you know you’re OK,” she said.