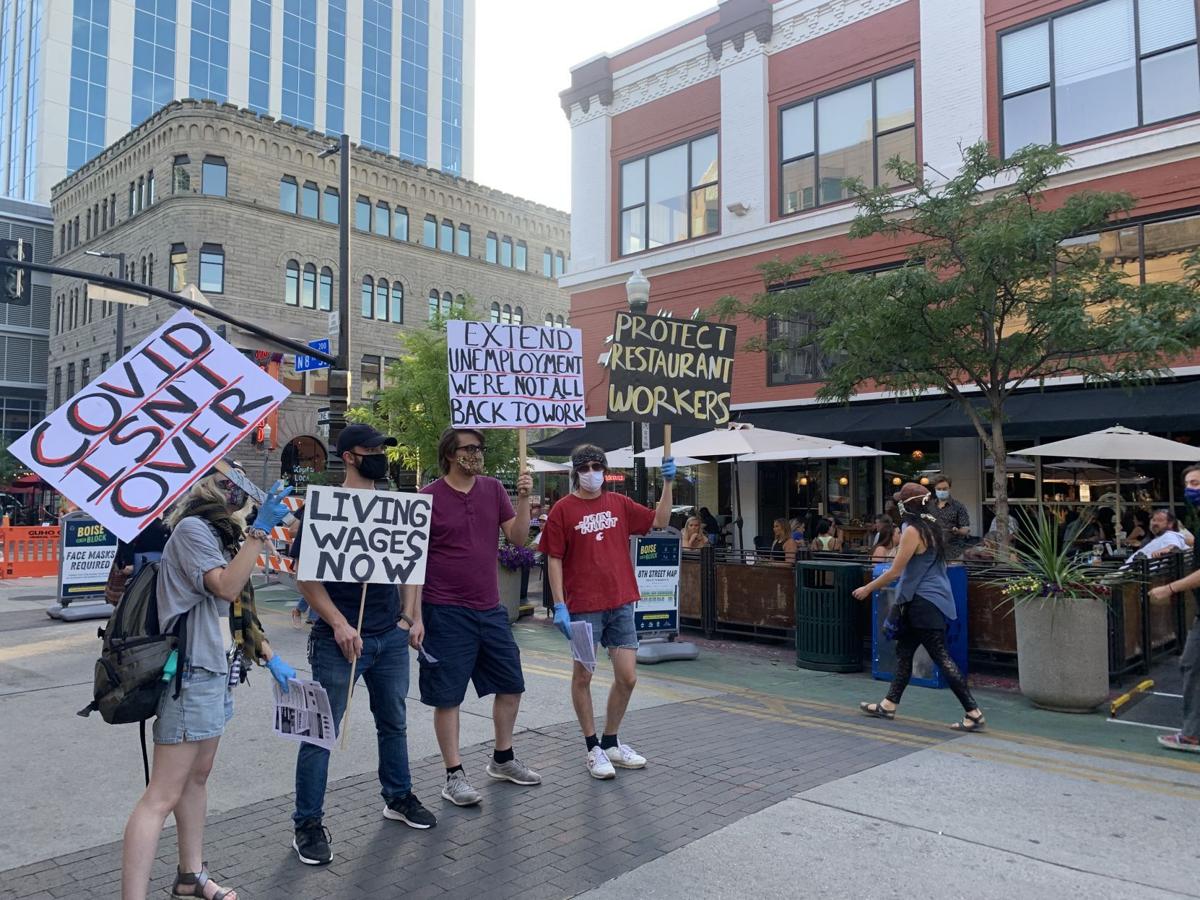 Demonstrators held up signs and handed out fliers pertaining to labor rights. 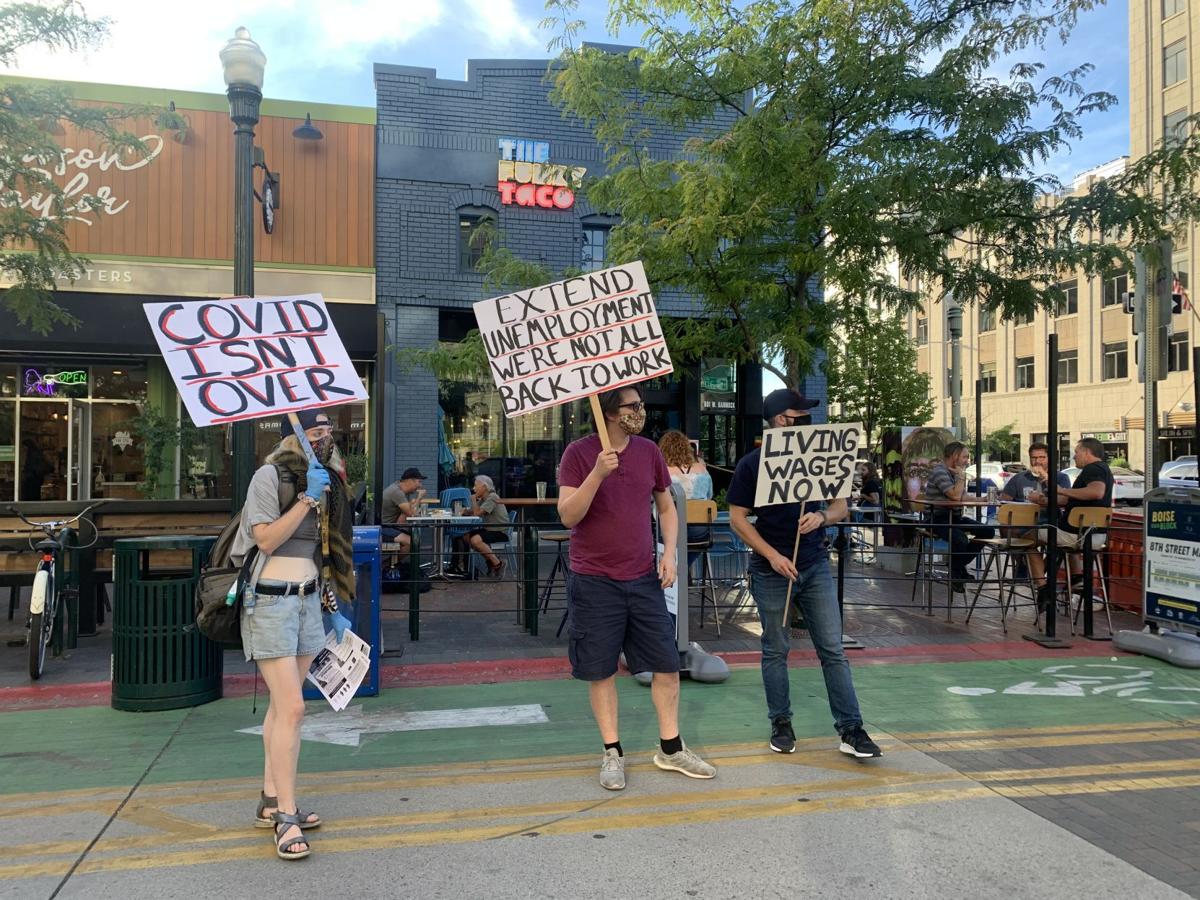 People participating in the dine-in disruption.

Demonstrators held up signs and handed out fliers pertaining to labor rights.

People participating in the dine-in disruption.

On most weekend evenings, or, really, any evening, downtown on Eighth Street is a hotspot of people patronizing restaurants, and the evening of Aug. 8 was no different. Most of the restaurants had full patios and groups of people walked along the newly expanded sidewalk areas. Nearby, though, came dissent against the return to normal.

“This is ridiculous, how many workers will die for a person to eat a meal,” said Pie Hole Workers Union member Marshal Harris. “We are coming out here because the very least we can do is remind people a pandemic is going on. Restaurant workers are suffering and there’s a real moral and ethical question that comes up: What is America doing?”

The Pie Hole Workers Union and the Boise chapter of the Red Republicans, a faction of the Democratic Socialists of America, have begun something called “dine-in disruptions.” On Saturday evenings from 6-9 p.m., the group demonstrates, pickets and hands out information about labor statistics and workers’ rights to passersby on Eighth Street.

Harris said the Pie Hole Workers Union is more than just a group created in response to their treatment as employees at the Broadway Pie Hole. It has morphed into a group of people who care about workers rights and in regards to COVID-19, he said the longer people keep acting like the pandemic isn’t going on, the longer people will be affected.

There weren’t a lot of people participating in the dine-in disruption, but they hope more will join, said Tyler Whitt, a supporter. He said he saw what happened at the Broadway Pie Hole through social media and came down: “I work in the industry too, COVID isn’t over and I don’t think a worker’s life is worth an appetizer.”

Austin Aggiman, from the Red Republicans membership coordination committee, said the goal is to raise awareness in such a high traffic area and his organization believes in direct action. He said it’s important for people to realize that if a group of workers are being treated in an unfair way in a society, it’s only a matter of time before that treatment spreads to all workers.

“We want people to know that these workers are human beings with real economic needs,” said Aggiman. “A lot of these people rely on tips and they can’t pay their bills. An injury to one is an injury to all. People don’t need to be restaurant industry workers to come and show support.”

According to restaurant.org COVID-19 has affected the restaurant industry more than any other in the nation. The Centers for Disease Control states that the more time people interact with others, the higher the risk of spreading the virus, and the highest risk involving food industry workers is on-sight dining with indoor or outdoor seating. Additionally, the PEW Research Center reports that 69% of Americans believe COVID-19 restrictions have been lifted too early.

Idaho is in Stage IV of its re-opening plan but is reporting, as of Aug. 10, 24,671 cases and 237 deaths. Daily cases have lowered slightly from 400 to 500 cases to 176. However, most restaurants have been open in some form since the beginning of the pandemic and according to Forbes, the pandemic has put a spotlight on problems these workers were already dealing with, like no paid time off and lack of employer-provided healthcare.

“The restaurant industry is still slated to expand during COVID, and even in our city restaurants are opening but people are in the process of literally dying to make and serve your meal,” said Harris. “Boise is supposed to be a liberal bastion but what leadership has done is to create a literal coronavirus hot spot in the name of economic growth.”

Harris said the people who are the most vulnerable are the workers. Many can’t afford to quit their jobs over health concerns and low wage earners are being treated as if they were disposable. Most restaurant workers make less than before the pandemic, and in a state where the minimum wage is $7.25 an hour, people are having a harder time making ends meet.

“It’s something that we’d like to bring forward again,” said Stennett. “At some point people have to admit that this isn’t working anymore. Us democrats have been pushing this topic for years and we encourage Idahoans to call their representatives.”

The wait for a raise in the minimum wage may be a long time coming, but Harris said the most important thing for now is to raise awareness for workers. Their goal is to help educate people who work in the industry so that their labor can be fairly compensated. He said that Boise leadership appears to care more about economics and tourism than the actual community that lives and works here.

“This is for those people who are having their labor exploited. I want them to know you aren’t alone in being manipulated, used and discarded and we will be down here until something changes. It’s not about owners, organizers or politicians. It’s about the people.”

In an earlier version of this story Marshal Harris was incorrectly identified as Marshal Ranck.