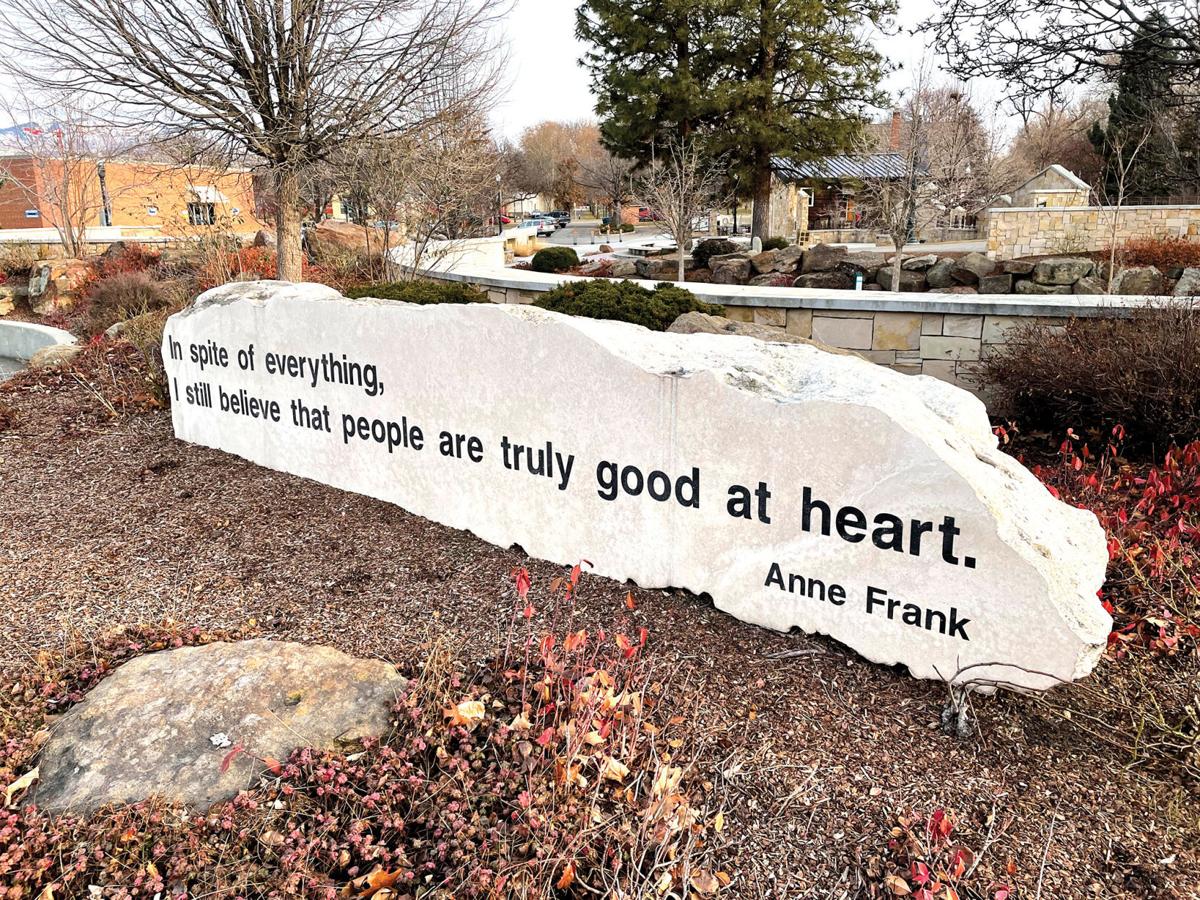 The Anne Frank Human Rights Memorial was founded on principles laid out in The Diary of Anne Frank, as well as a mission to educate. 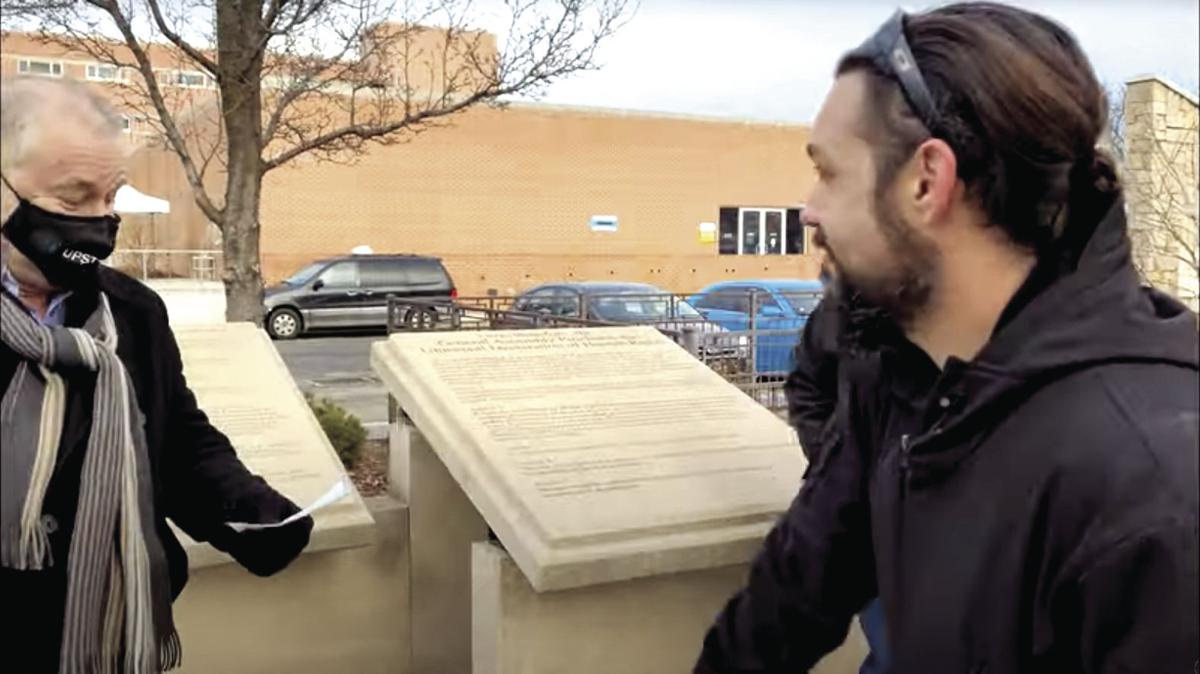 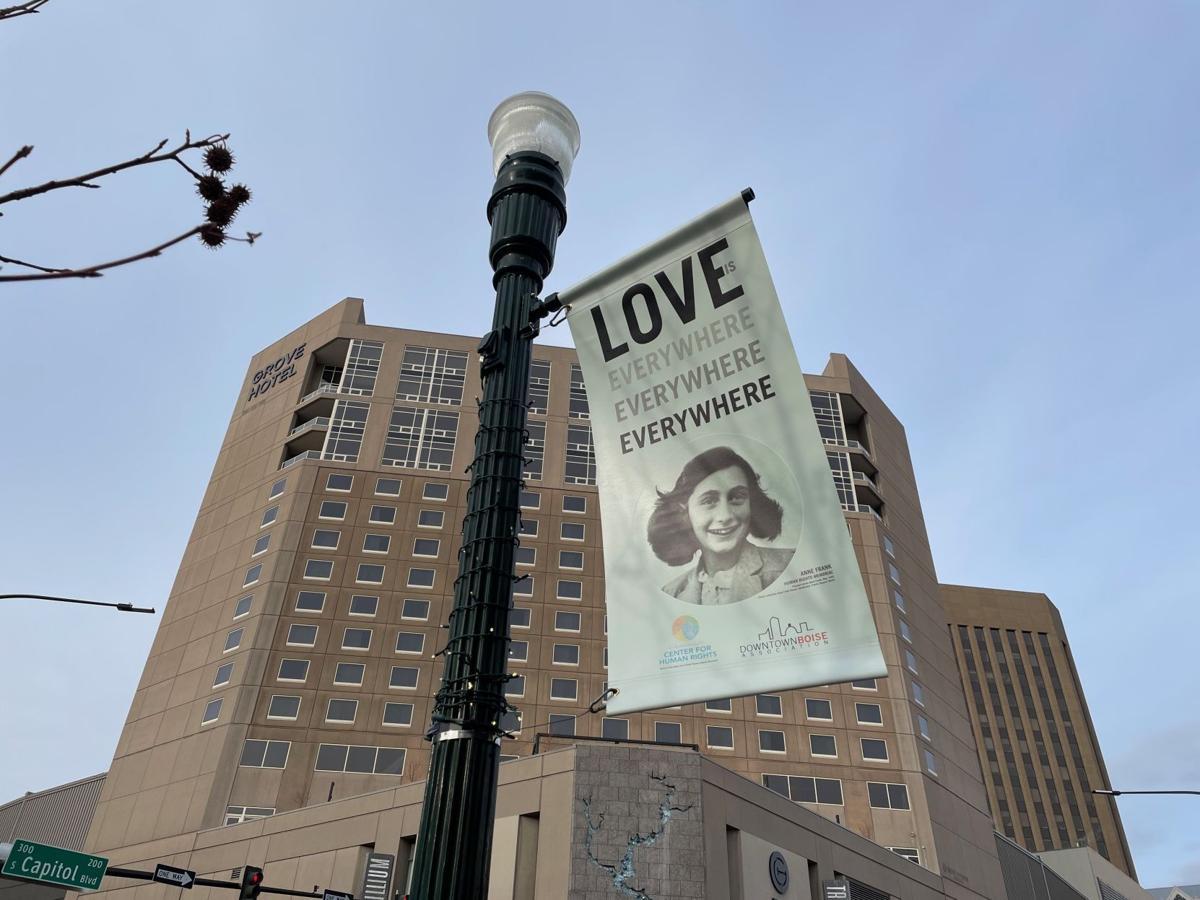 The Wassmuth Center launched its Love is Everywhere campaign after stickers bearing swastikas were found at the Anne Frank Human Rights Memorial in December.

The Anne Frank Human Rights Memorial was founded on principles laid out in The Diary of Anne Frank, as well as a mission to educate.

The Wassmuth Center launched its Love is Everywhere campaign after stickers bearing swastikas were found at the Anne Frank Human Rights Memorial in December.

In the video, published Dec. 30, Wassmuth Center for Human Rights Executive Director Dan Prinzing stands in the Anne Frank Human Rights Memorial buffeted against the elements in a dark jacket, a scarf, gloves and a face mask.

“What we dabble in is building community. Just, what do we share together, what’s the commonality? So we don’t get hung up on party or race, religion, orientation, or any of the other extraneous features that divide people. What we look at is what we share in common,” Prinzing says to a small group gathered in front of him.

“We have a lot of the same philosophy. We really do,” says the group’s leader, who, toward the end of the video, hands Prinzing a check for $1,000.

Earlier that month, vandals desecrated the memorial with stickers bearing swastikas, prompting public outcry and a flood of donations like the one described above to the Wassmuth Center, which operates the memorial. The group to whom Prinzing spoke was a contingent from the Real 3%ers of Idaho, widely held to be a militia group, and the man speaking in the video and who handed Prinzing the donation was Eric Parker, who is best known for training his rifle on federal agents during the 2014 Bundy standoff in Nevada. This donation, and another from anti-government militant Ammon Bundy, have become sources of controversy among those close to the center, and some with early knowledge of the video have called for an apology and Prinzing’s resignation.

The video, which was originally released on the Real 3%ers of Idaho YouTube channel, was sent to Boise-area media outlets in an anonymous email in which the author (or authors) asked for Prinzing’s resignation, criticized the Wassmuth Center’s Love is Everywhere campaign in the wake of the memorial’s vandalism as “denial and dismissive of the fact that injustice is real and we cannot move forward unless we are honest about what it is,” and denounced the center’s acceptance of the 3%ers’ donation as collusion with “hate groups just weeks after an attempted coup attempt on our democracy was waged on the US Capital.”

The 3% of Idaho group has long been associated with militia-type activities. In 2013, group leaders attempted to construct a walled compound in Benewah County, several of its members participated in the Malheur Wildlife Refuge Occupation in Oregon, and it has been an opponent of refugee resettlement in the Gem State. Members have attended counter-protests against Black Lives Matter and Defund the Police demonstrations. Though members of other chapters of the nationwide organization have been tied to hate groups, the insurrectionary assault on the U.S. Capitol Building on Jan. 6 and an attempt to abduct Michigan Gov. Gretchen Whitmer, leaders of the group, including Idaho Chapter President Parker, have routinely denounced racism and other “supremacist” ideologies as gateways to tyranny.

“The bottom line is, we denounce all forms of religious and racial supremacy, and what that means to us is that supremacy comes with oppression, and we’re opposed to oppression flat-out,” Parker says in the video. “We really want to come out here and show you that we really do denounce it, and we really didn’t like what we saw in the community [the vandalism], and we wanted to publicly make sure that our community knows we didn’t like it—and especially those that did it.”

In a previous video and in the one shot at the memorial, Parker said the donation might go toward security cameras, and that it would be a show to all that the group does not stand with people or other groups with hateful ideologies. It also refuted claims that the Real 3%ers of Idaho is itself a group with such an ideology, as its critics have inferred from some of its activities, including its appearances at anti-Black Lives Matter and anti-refugee protests.

Ammon Bundy became a household name after the standoff at his father’s ranch, and again in early 2016, when he and a group of armed compatriots occupied the Malheur National Wildlife Refuge for more than a month. Though a grand jury indicted Bundy for his role in those events, he was found not guilty on all counts. During a special session of the Idaho Legislature in the summer of 2020, he was arrested twice, in one case being wheeled out of the Statehouse in an office chair.

Though militia groups have occasionally found common ground with him, Bundy has disavowed the militia movement and been vocal in his support of the Black Lives Matter movement on the grounds that he believes law enforcement is far more dangerous than BLM. His opposition to public health mandates during the coronavirus pandemic have aroused public ire: In 2020, he compared those mandates to the Holocaust.

Speaking with Boise Weekly, Prinzing said that the Real 3% of Idaho had engaged his services as a human rights educator, and indeed, he is shown in the video discussing the history and uniqueness of the memorial, as well as its mission to stand against hate and bigotry, as well as the motto, as Anne Frank put it in her diary, that “I still believe, in spite of everything, that people are truly good at heart.” It is, he said, “a message we share freely with all.”

Nevertheless, he acknowledged that many of the group’s behaviors have raised eyebrows within the Wassmuth Center.

“[The donation] came from a group whose actions we’d find contrary,” he said, “so it does create a difficulty for us.”

The Wassmuth Center receives donations of all sizes and from all different kinds of people, and like many nonprofits, it has privacy policies in place to protect the identities of the people who give it money. According to Wassmuth Center Board President Don Murray, the Real 3%ers of Idaho approached the center “expressing at first a desire to have a conversation”—only later announcing its intention to offer the center money. Speaking with Boise Weekly, he said he supported Prinzing’s actions and behavior when meeting with Parker and the 3%ers.

“What really struck me is that what Dan Prinzing did in the moment of judgement, which I think was pretty courageous—he opened his heart to talk to some people that might be harder to talk to based on what we perceive of them,” he said.

After researching the group, Murray forwarded his findings to his advisory board to determine if such gifts are in line with the center’s educational mission. An email from Murray obtained by Boise Weekly confirmed that an additional $2,000 was “quietly and respectfully” donated to the center by Bundy, who had not made his donation public. It also linked Bundy and the 3%ers group as potentially problematic donors, suggesting that the center might consider undertaking additional diligence with donors concerning their motives.

“Arguably the Bundy family and Eric Parker are ‘cause’ connected in some form,” Murray wrote in the email. “There is good reason for us to be naturally suspicious and careful of their intentions - be they sincere or opportunistic.”

The week of Jan. 20, the center’s board met to consider those issues, and on Jan. 24, Murray wrote to Boise Weekly with an update. Though neither Bundy nor the Real 3%ers of Idaho were mentioned by name, the board president reported that the board had unanimously voted to return two donations from individuals and groups “whose demonstrated actions and posture within the community are at odds with the Center’s mission of promoting respect for human dignity and diversity.”

“We welcome and value the support of those who share and uphold the Center’s mission but remain steadfast in both our work and those who stand with us to recognize the power of words and the evidence of action to promote and protect human rights,” he wrote. “In light of this situation, the board will undertake a review of the Center’s gift acceptance policies and procedures.”