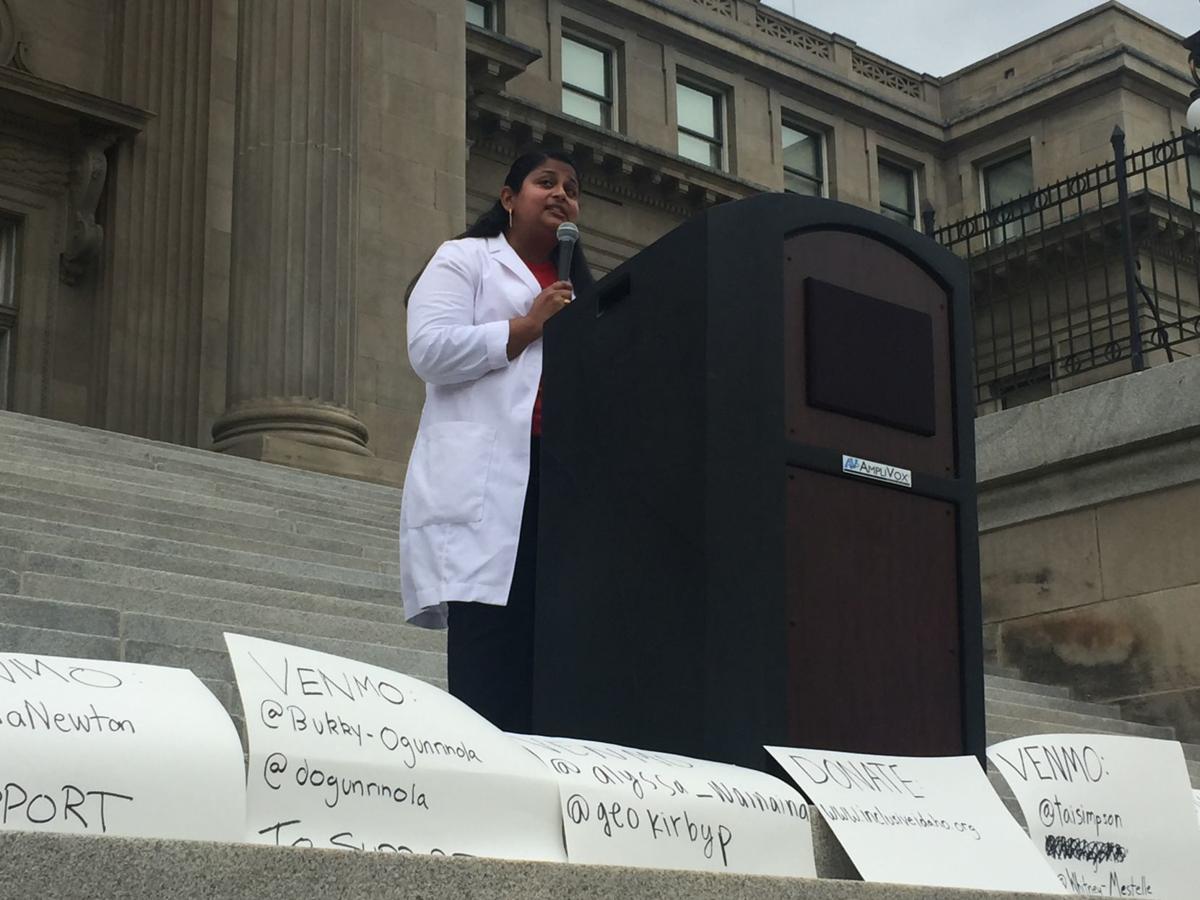 Dr. Andrea Christopher was the emcee of a Black Lives Matter rally that focused on inequality and racism within the healthcare system. 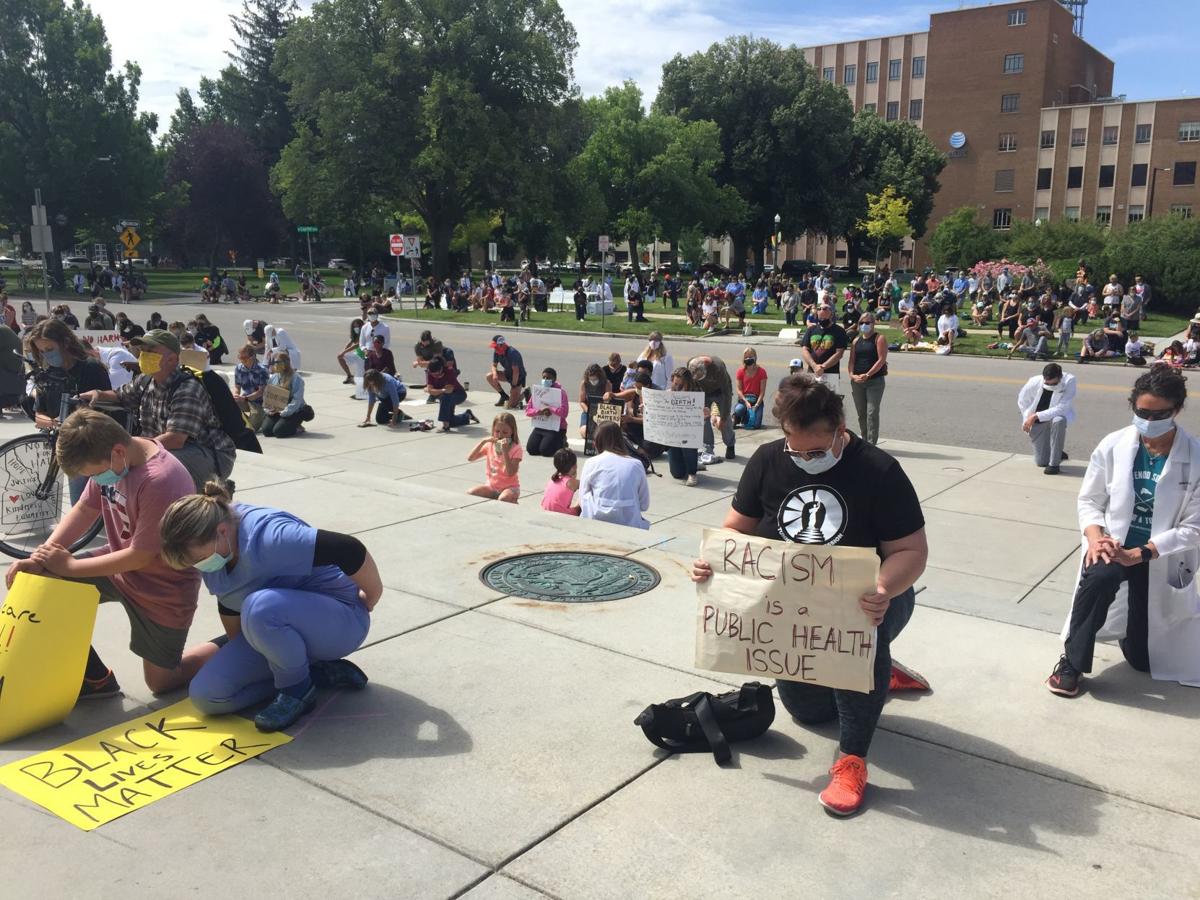 Attendees of the White Coats for Black Lives rally in Boise on June 20 took a knee in honor of George Floyd, who was killed by police in Minneapolis on May 25.

Dr. Andrea Christopher was the emcee of a Black Lives Matter rally that focused on inequality and racism within the healthcare system.

Attendees of the White Coats for Black Lives rally in Boise on June 20 took a knee in honor of George Floyd, who was killed by police in Minneapolis on May 25.

Before the June 20 rally at the Capitol steps could begin, there were a few orders of business: First, everyone should maintain adequate social distance, at least six feet; secondly, face masks would be required. Volunteers handed out bottled water and spare face masks at the periphery. Then, emcee Andrea Christopher M.D. delivered her thesis.

"We are not going to undo centuries of racism in a heartbeat. ... This work is long, and this work is hard," she said. "We are here because racism is a pandemic."

Christopher is an assistant professor of medicine at the University of Washington and the medical student clerkship site director for the Boise VA. She is also a person of color and a student of how social issues bear on the practice of medicine. As COVID-19 has ravaged the United States—the death toll has now exceeded 120,000 people—it has devastated Black, Indigenous and other communities of color disproportionately, and through her own remarks and the people she brought to the podium, Christopher sought to highlight the ways systemic racism affects both sides of the proverbial doctor-patient relationship.

Among them was Dr. Ty Waters, who discussed some of the ways in which overt and covert racism have impacted his medical studies and practice. He described instances in which he has been confused for a thermostat repairman despite his white coat and credentials, when a grandmother couldn't conceive of a black man delivering a baby, and the experiences of being consistently misidentified or being called the N-word by patients while on duty.

The most subtle digs and bald-faced attacks, he said, have something in common.

"Racism isn't about the words," he said. "Racism is about someone thinking about you as unequal."

The threat of COVID-19 loomed in the background of the rally, but beyond the added need for public health measures at a gathering of approximately 400 people, the pandemic has highlighted racial disparities. According to a report released by the Centers for Disease Control in April, approximately one-third of patients hospitalized for COVID-19 were Black, despite Blacks making up 12-14% of the U.S. population. Native communities have also been hard-hit.

These disparities have been attributed to Black and Indigenous people and people of color's higher rates of poverty and a lack of access to medical treatment, but the inequality doesn't end there, and many of the speakers who took to the podium discussed their experiences being the only Black or person of color working in their unit at a hospital. The absence of non-white faces in higher-responsibility, higher-paying medical occupations, they said, has alienated many of their peers and reinforced the expectation that BIPOC healthcare professional occupy the bottom rungs of the hospital and healthcare setting career ladders. According to a report from the Association of American Medical Colleges, during the 2018-19 school year, just 6.2% of medical school graduates were Black, part of a downward trend in Black medical school graduation since the 1970s.

Underrepresentation is one of the tentpoles of systemic racism within the healthcare system, said protest organizer Dr. Sarah Gerrish—one that can't only be addressed by recruiting and retaining more physicians and care providers of color. The tests and other tools used to gauge the competency of medical students she said are geared toward the white test-taker, and inadequate educational access in BIPOC communities has led to a sickly trickle of members of those communities entering medical professions.

"You take a Black person in general—they're not going to have a lot of access to medical school," she said.

The remedy, she said, requires a thorough study of the problem within medical schools and at hospitals as part of a general reckoning with representation and access, as well as a willingness on the part of people who work in those settings to apply pressure to leadership to develop and implement solutions.

"It is really important to have groups looking at policies in representation," Gerrish said.