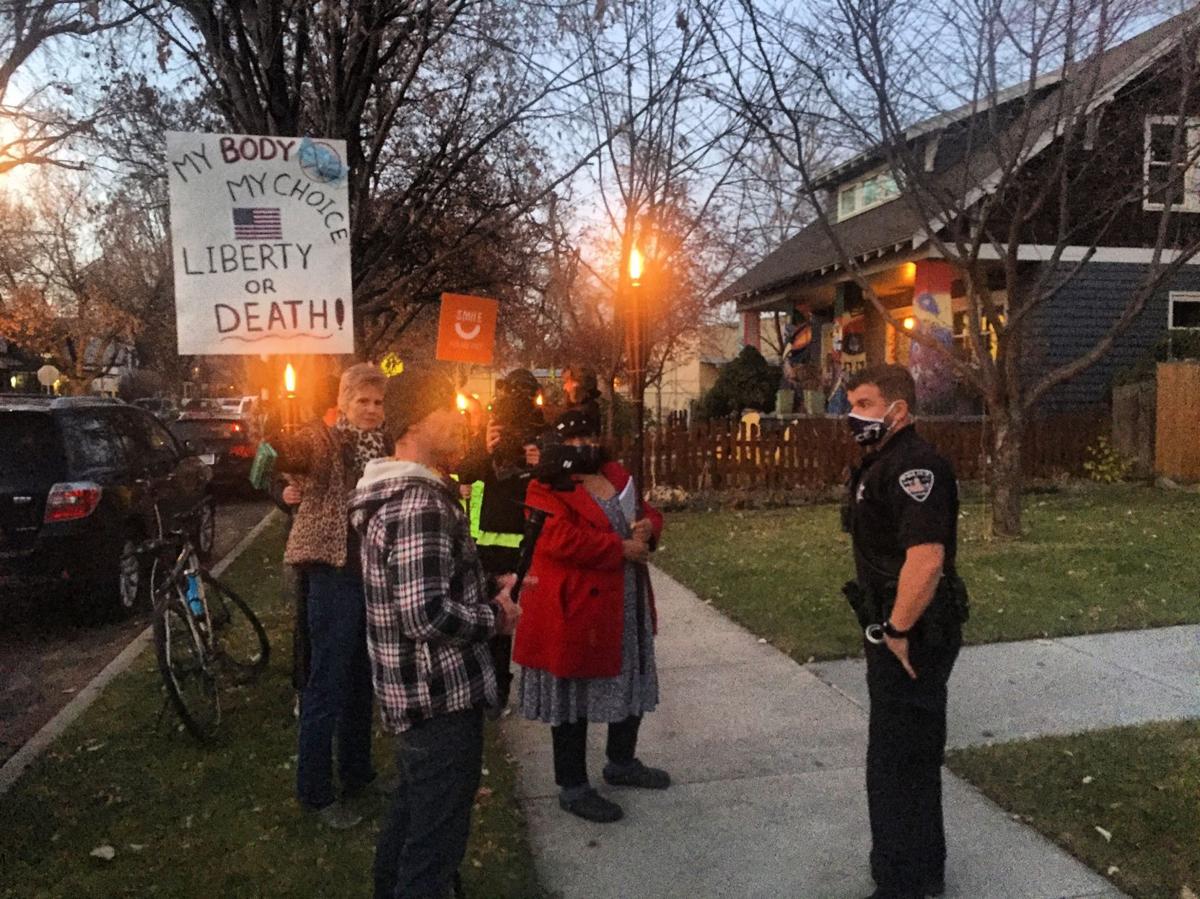 Protesters gathered at the home of Mayor Lauren McLean in November to air grievances with the city's face mask rules. 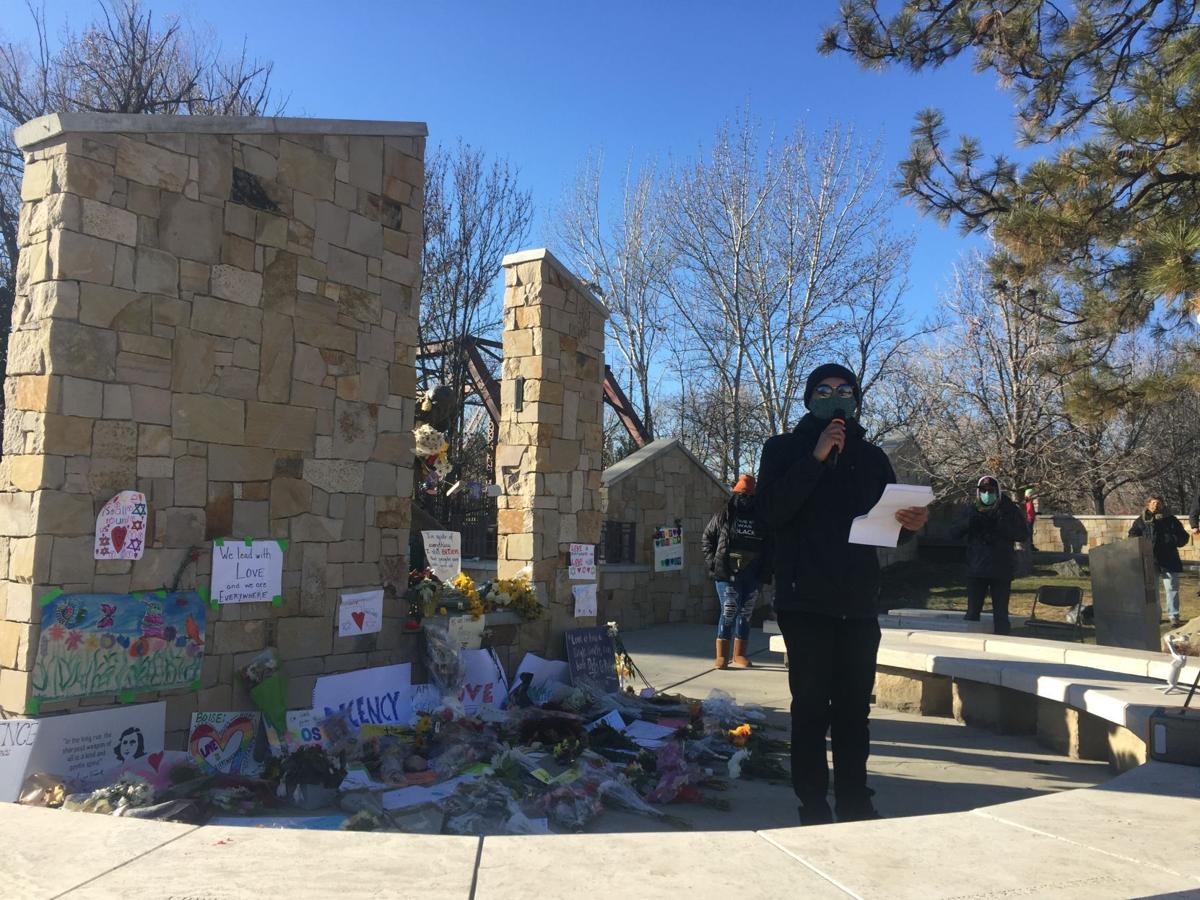 Protesters gathered at the home of Mayor Lauren McLean in November to air grievances with the city's face mask rules.

When someone offered him a face mask, he refused. Soon, he began circling the amphitheater at the Anne Frank Human Rights Memorial, a smirk on his face. Demonstrators soon had him surrounded, blocking his view of the speakers who had come there to decry recent neo-Nazi vandalism at the memorial.

“All lives matter!” he started to shout before being pried loose of the Dec. 12 demonstration.

Two days before, the memorial had been pasted with stickers bearing swastikas and the words We Are Everywhere. It was an incident that immediately raised Boise’s hackles and spurred numerous demonstrations, including the one at the memorial itself and another involving projected words and images at Boise City Hall. These events were as much about affirming the values of the City of Trees and its commitment to be a safe and welcoming place for all as they were warnings that hateful ideologies are unwelcome.

“We’ve staked our claim that this is a city of love,” said Terry Wilson of Black Lives Matter Boise at the human rights memorial. “We are louder than them.”

For people at these protests, the racist vandalism demanded the immediate response of a united front, and in building it they invoked ideas and themes that have been in the mix throughout 2020 as a pandemic, a divisive presidential election, economic woes and racial acrimony have thrown society into disarray. Wilson told the more than 100 people who showed up to the memorial in face masks that “it isn’t enough to be non-racist, but anti-racist,” and many remarks echoed the rallying cries of Black Lives Matter, the defund the police movement and critics of President Donald Trump.

A similar principle has applied to a more conservative crowd, as government lockdowns, constraints on businesses and face mask ordinances have become for many Idahoans an unprecedented and unwelcome intrusion of the government into their lives. In the beginning of the summer, they joined a broad coalition of so-called liberty-oriented organizations, anti-mask and anti-vaccine advocates to pressure Gov. Brad Little into easing public health measures.

Later, these same activists changed up their tactics, but their medical skepticism and distrust of public officials—particularly those in Boise—remained the same. On Nov. 23, more than a dozen appeared at the home of Boise Mayor Lauren McLean. Here are a few of the things they said: “Public health doesn’t exist;” “God told me there would be tiki torches;” “Lauren McLean is a fascist;” “This is communism;” “I have a pitchfork.”

Protests at the homes of elected officials began over the summer, quickly demonstrating political effectiveness. On Dec. 8, McLean and Boise Police Chief Ryan Lee called the Central District Health District Board to ask it to adjourn its regularly scheduled meeting early over safety concerns. As its members set up to consider a face mask mandate for situations in which people cannot maintain 6 feet of physical distancing, hundreds of demonstrators had descended on the CDHD offices and at the homes of three board members.

“There are protesters banging outside the door,” said Health Board Member and Ada County Commissioner Diana Lachiondo, who had joined the meeting from her office at the Ada County Courthouse. “I’m going home to make sure [my son] is ok.”

The board voted to adjourn before considering the mask mandate, leading some to say the application of a heavily charged protest atmosphere on local-level politicians has hampered their ability to enact public health measures during a pandemic. Emily Walton didn’t think about it long, and on the same evening as the cancelled CDHD board meeting, she had drafted a petition called The Idaho 97%, which seeks to counter the anti-mask protests with a broad statement of support of the public health officials and medical professionals.

The name of the petition is a jab at the III%, a patriot movement group that got its own name from an apocryphal statistic that just 3% of colonists participated in the American Revolution. That a minority is vocal, Walton said, doesn’t mean it should be able to derail the business of government, particularly when its claims—e.g. that face masks abridge freedom—undermine public safety in a time of crisis.

In a bid to counter that message and remind political and public health leaders that a majority is on their side, the petition seeks to represent people “who are doing their damndest to get through 2020,” despite the noise.