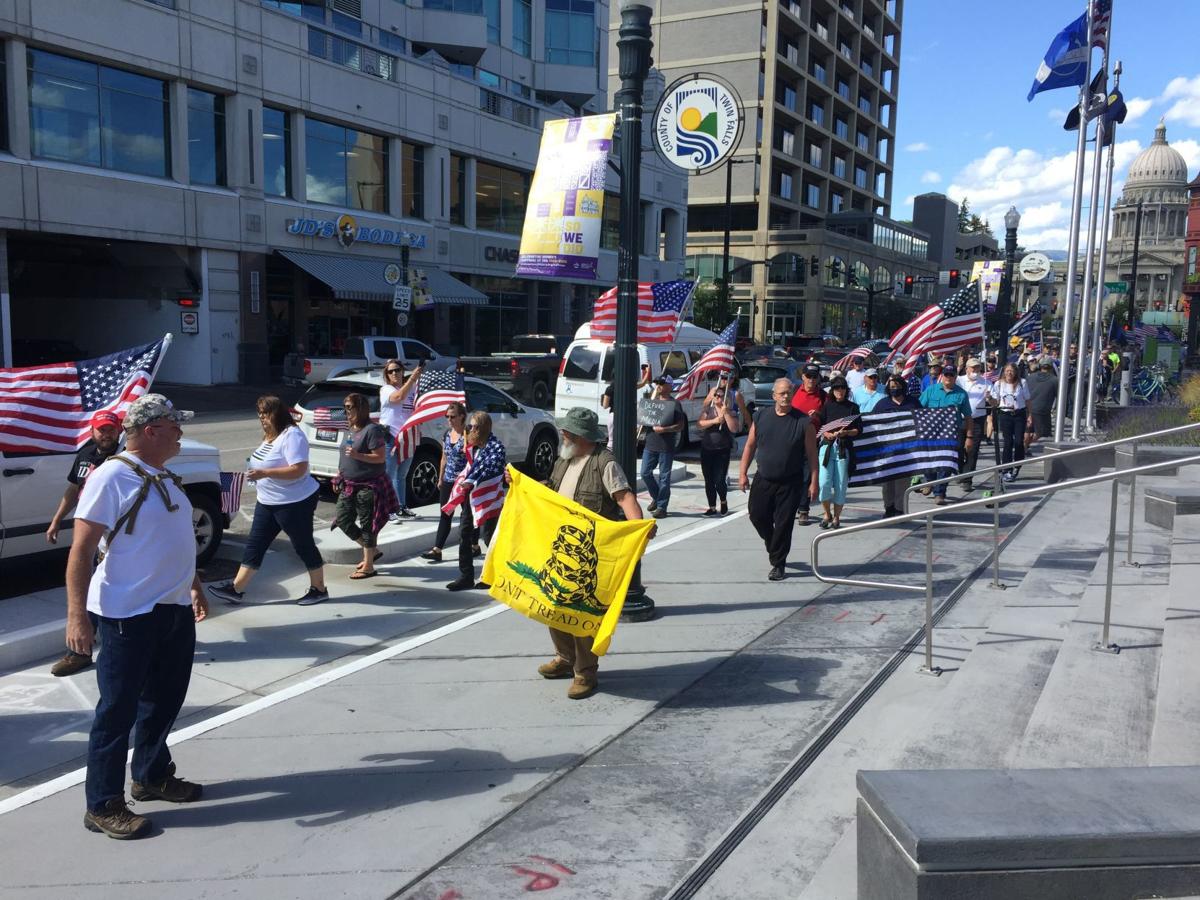 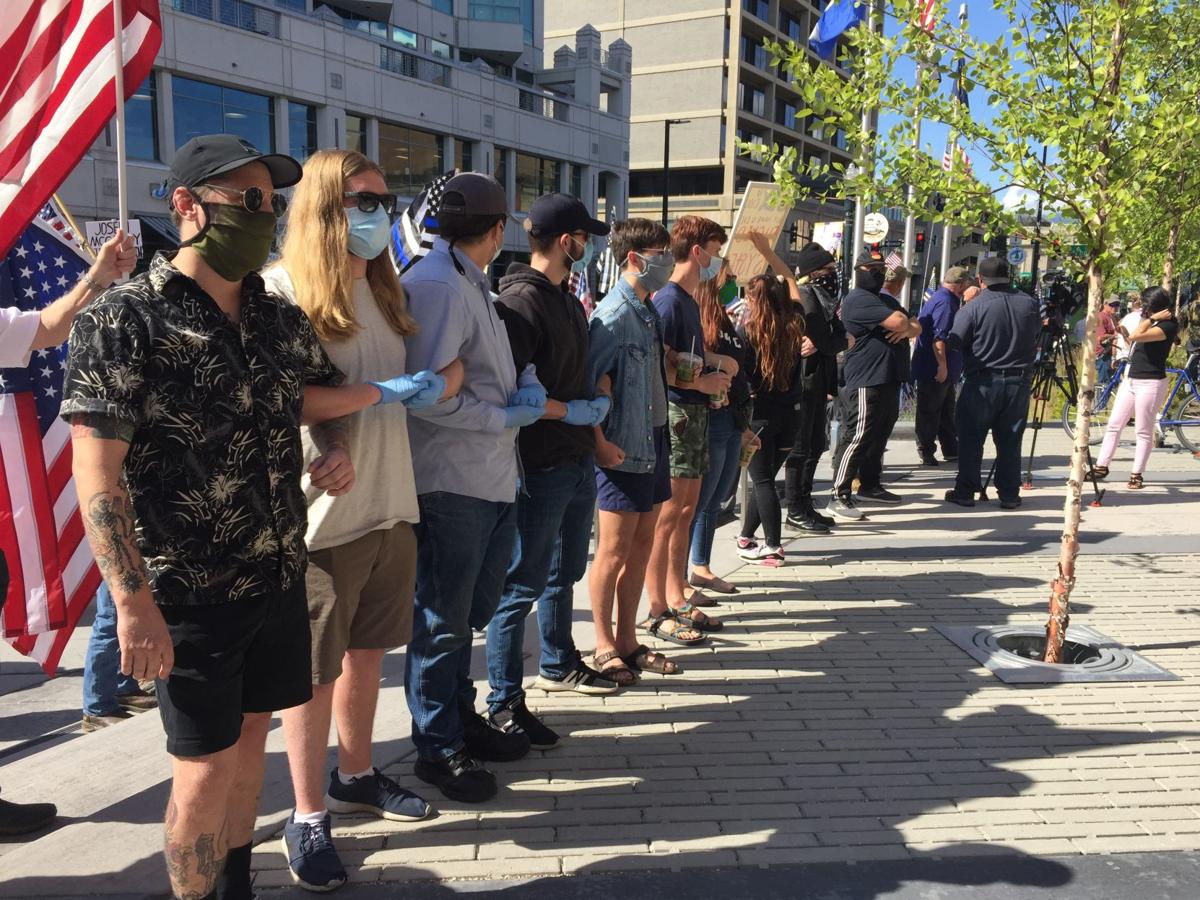 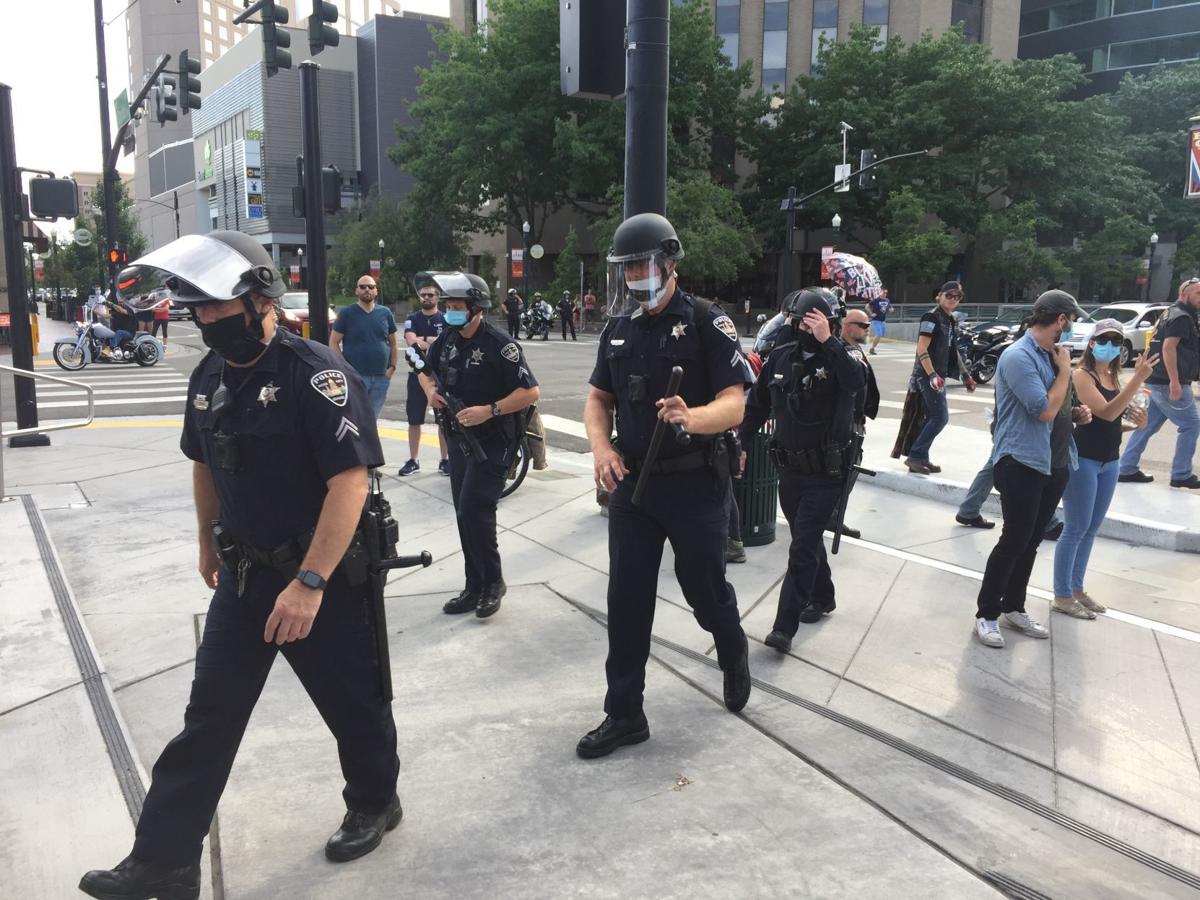 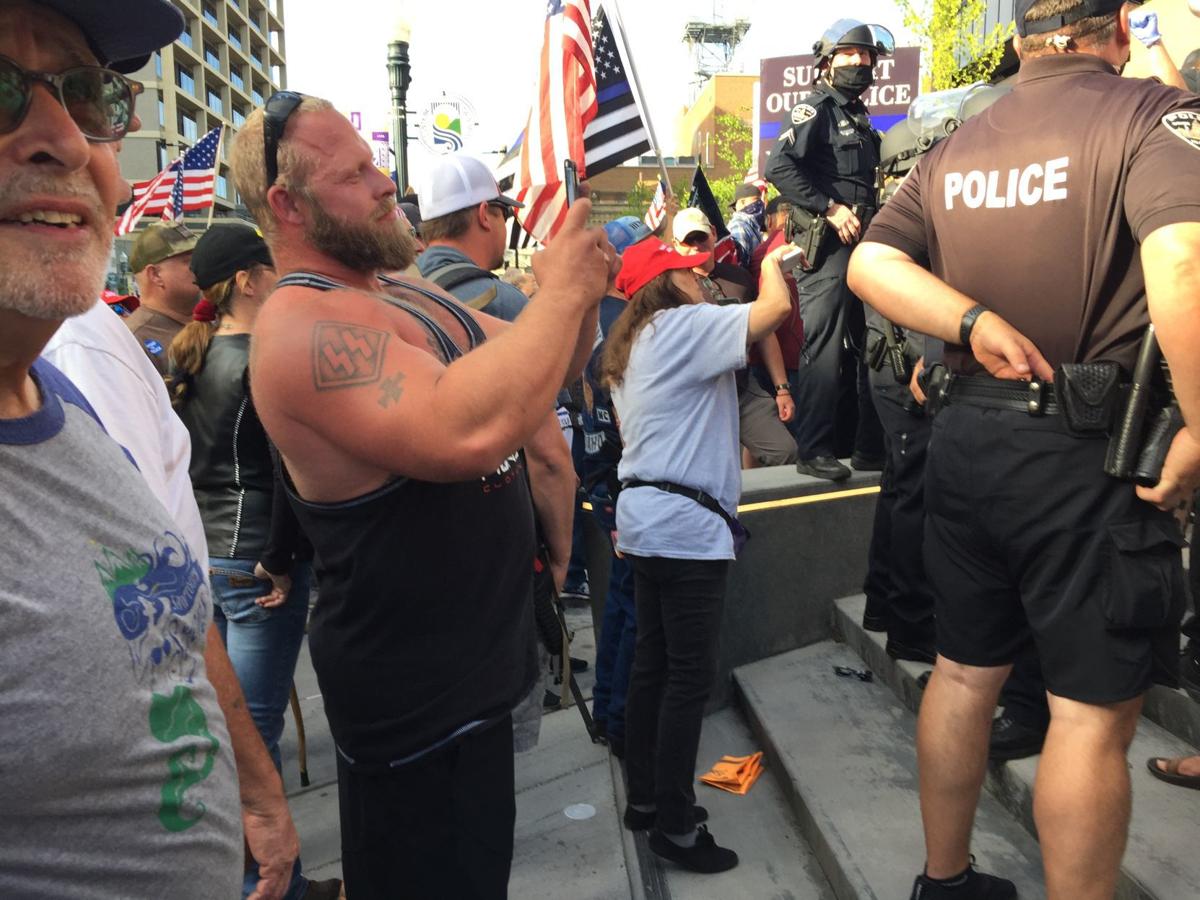 I already knew about the counter-protest before I arrived at the Black Lives Matter protest itself. Riding my bike past Cecil D. Andrus Park, however, I was shocked at the number of people waving American and Gadsden flags, waiting for a green light to march down Capitol Boulevard to Boise City Hall.

The counter-protesters to the June 30 BLM/Defund the Police demonstration vastly outnumbered the mostly young advocates of reallocating police resources to social services. They arrived earlier even than most of the protesters, and quickly enveloped the leaders, kicking off what was easily the ugliest confrontation BLM in Boise has faced since the beginning of June, when the protests began in Boise.

The issues at play for Black Lives Matter are straightforward: The group and its supporters say that Black, Indigenous and people of color are disproportionately harmed by police, and that the remedy is to shift money from the Boise Police Department to other services that are better suited to address many of the calls to which BPD responds. They are upset that Boise Mayor Lauren McLean and the Boise City Council have not taken up their cause, though at its regularly scheduled meeting, the city council did discuss expanding social services, as well as how the Boise Police Department interfaces with them. This year, the City of Boise is expected to spend $.288 of every tax dollar raised on police.

"You insisted on allocating resources to a criminal organization," said Ryann Banks, one of the BLM organizers. "No, the people do not want coffee with a fucking cop."

The motivations of the counter-protesters, organized by the group Idaho Liberty Dogs, were more opaque. Some said they were there to support police, whom they saw as unfairly maligned by the BLM movement. Others were there simply to criticize BLM itself, which some painted, incorrectly, as a shady national organization bent on undermining American institutions and values. One person said he was there to offer "protection." At least three motorcycle clubs attended, as did a number of heavily armed Patriot Movement groups like III% of Idaho, as well as the Idaho Second Amendment Alliance. All rubbed shoulders with unapologetic racists, complete with Schutzstaffel patches and tattoos.

Tensions between the two groups peaked early and didn't let up until long after BLM organizers disbanded their side of the demonstration. Tai Simpson, a local activist and storyteller, opened the demonstration with a land acknowledgment, during which she told the assembled crowd that "I love that you say you're all Americans, but y'all are on Indian land"—a statement that was met with boos and disdain from counter-protesters. During a period of silence to honor George Floyd, a Black man whose death at the hands of a Minneapolis police officer sparked nationwide protests, they began chanting "U-S-A!" and "Blue Lives Matter." And when protesters read the names of Black transgender women who'd been killed by police, several counter-protesters shouted, "We don't care!"

Intimidation was constant and violence was always on the table. As counter-demonstrators swarmed the steps and patio, BLM formed a tight circle near the City Hall doors, with organizers on the inside and allies ringing around them as a defensive shield. Despite the protective measures, near-constant appeals from BLM for supporters to not throw the first proverbial punch and the presence of Boise Police officers in riot gear, several fights broke out between the two groups, nearly all of them instigated by counter-protesters, with several injuries reported. At one point, a counter-protester bearing a loud siren nearly leaped over a police officer, threatening to kill another person during a verbal altercation.

The consternation was so intense that the next morning, on July 1, Mayor Lauren McLean issued a statement in which she condemned "those who showed up in our community under the guise of 'protection' and instead intimidated, shouted epithets and white nationalist slogans, and in some cases physically assaulted protesters."

By 7:30 p.m., BLM began telling protesters to go home, making sure left City Hall safely. Many stayed behind, holding conversations and leering across the plaza at counter-protesters. One claimed that some Irish people had come to America as slaves. Another said he couldn't be a racist because he works out with a Black man.

It's hard to say when, exactly, the affair could be said to have ended. I waited for more than an hour after BLM told people to break away, eyeing events and wondering how to write about the events of June 30. Ultimately I chose the "reporter's notebook" format, where I can combine reportage and my impressions, while communicating the feeling left with me at the end of the night. Not since the anti-refugee protests in 2015 have I seen such ugliness from Idahoans. Normally when supporters of right-leaning causes gather in the public square, they do so with a policy objective in mind, or to make their own positions on a given issue better-heard. But on Tuesday evening, all the American flags in the world couldn't cover up the naked attempts to intimidate, harass and provoke the Black Lives Matter protesters—in short, the counter-demonstrators were there with no more objective in mind than to disrupt, silence and terrorize activists with whom they disagreed.