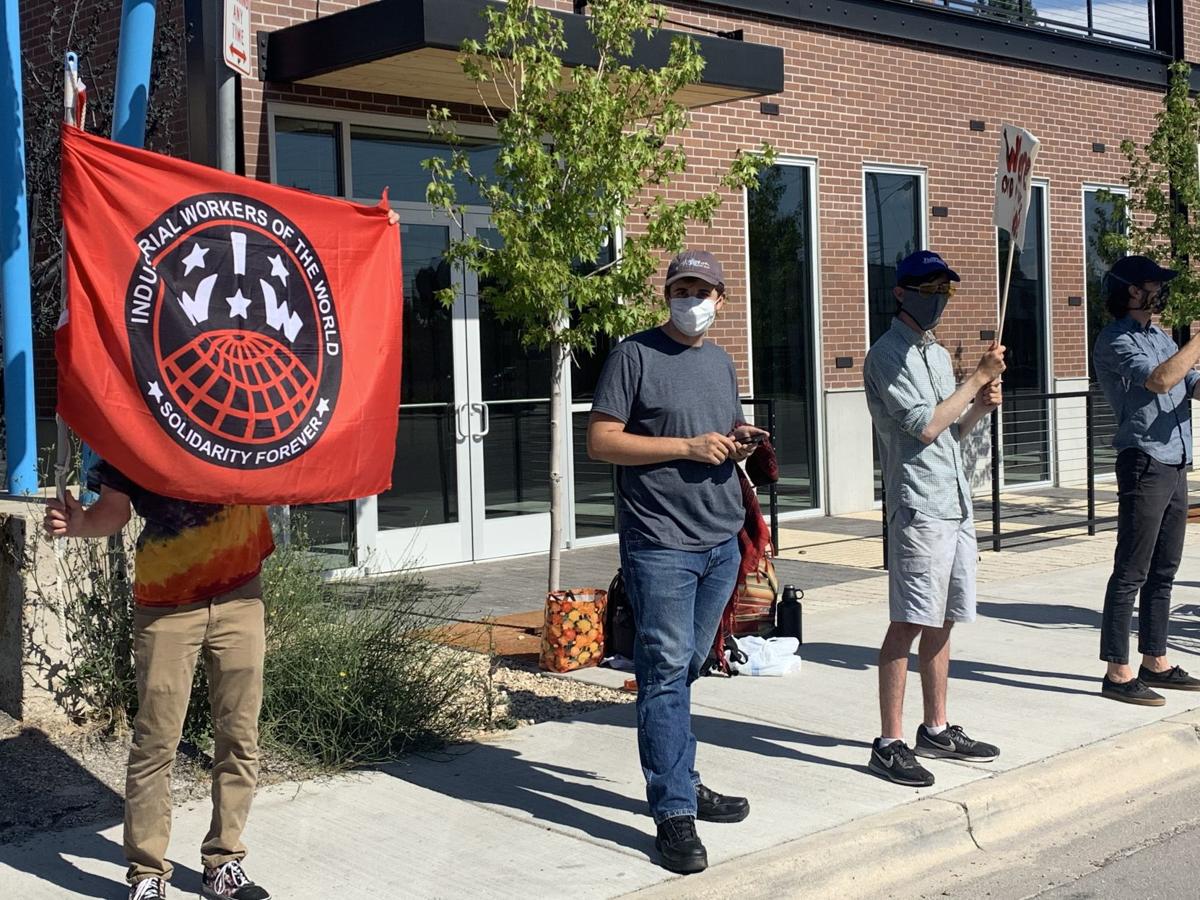 Workers picketing the Pie Hole just want to be paid a livable wage. 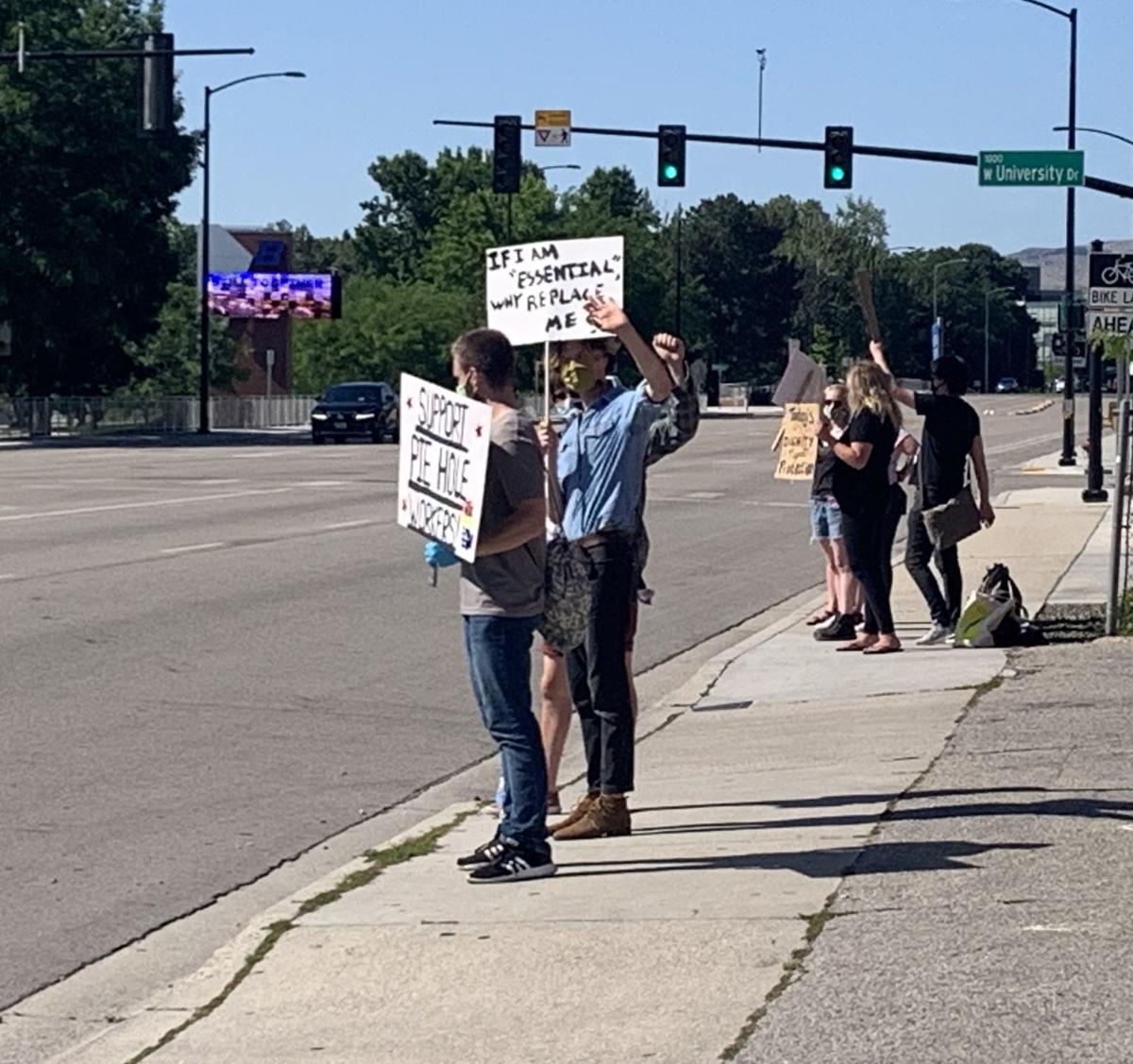 "If I'm essential why replace me?"

Workers picketing the Pie Hole just want to be paid a livable wage.

"If I'm essential why replace me?"

The employees at the Broadway Pie Hole were working hard after the pandemic hit, but they were making less money than before. As a result, all six supervisors and the employees decided to approach management with a request: “pay us a living wage.”

“People shouldn’t have to be afraid of their bosses and scared they can’t make enough money to eat and pay their bills,” said Marshall Harris, a former supervisor there. “I want my job back at a living wage, and I want people to know they’re not alone and don’t have to be intimidated.”

In solidarity, the Boise chapter of the Democratic Socialists of America and the Red Republicans, a faction of the DSA, supported the Pie Hole employees’ call for fair compensation. The workers wrote a letter to the company asking for a $3-per-hour raise and more direct input in the policies that affect them. Many said that instead of receiving a raise, they were fired.

Another former supervisor, Miles Ranck, said that when new owners bought the franchise in March of this year, the employees felt supported. Management started to make improvements around the store and gave the staff a modest raise. However, as the pandemic spread, the demand for pizza increased dramatically, and the workers felt they weren’t being fairly compensated.

“I went a week without taking a break because if I did, I wouldn’t be able to get all the prep done,” said Ranck. “At the time I was happy to because I felt the manager was being responsive, but after about a month of working twice as hard with no compensation we [the employees] decided to approach management.”

Business was booming for Pie Hole, but employees ultimately took home less pay—a mounting problem affecting many people in the service industry. As dining rooms closed and customers began to rely more on take-out and third-party delivery providers like Uber Eats, service industry workers lost their tips, which make up a substantial part of their income. Employees at the Pie Hole said they lost hundreds of dollars a week that they used to rely on, and the raise given to them in the beginning didn’t cover the loss.

In Idaho and across the nation, many people are working and not making enough money to live. According to research from the Brookings Institute, there are more than 12 million food and beverage service workers in America, and a large percentage of those people rely on tips for a substantial part of their income.

The people working at the Pie Hole delivered their demands for fair pay in the letter they wrote together to management after an employee meeting on June 24. Ranck said they felt hopeful because the manager seemed receptive, but the employees did not receive any contact about their request from the manager or owners, and said that about a week later, the company quickly began conducting interviews, and the employees began to feel like the management had started a search for their replacements.

On June 29, Ranck said an owner of the franchise, Geo Engberson, gathered the supervisors for a meeting to ask if they would train their replacements—a claim Engberson disputes. When management refused, they were fired and then almost all of the other employees told the owner they wouldn’t train the replacements, either. Ranck said they chose to be fired in solidarity with the two supervisors.

“To be honest, after our action, it felt incredibly empowering to prove our work is just as important as their work,” said Ranck. “We just wanted to be able to buy food and groceries, but it felt good to stand up for what you believe in.”

Engberson, however, offered a different account of the events. According to him, other than the two employees fired for refusing to work, he considers the rest to have quit. He said the workers’ demands weren’t fair and he doesn’t think that everything done in the store should come under a vote.

“I think the two ringleaders made the other employees think it would work, but they miscalculated,” said Engberson, “and I’m not negotiating with hostility, and that’s an attack on the business.”

Engberson said he wasn’t trying to get the employees to train their replacements; he was only trying to hire new workers. He said the pandemic threw the business for a loop, and he had to make a lot of changes quickly. Prior to receiving the letter, he said he thought his workforce was happy.

The former employees picketed the business on July 3, and said they haven’t received their termination documents needed to apply for unemployment.

Engberson said the business has made all new hires and will not take back the former employees.

The Boise DSA members of the Red Republican faction aided the employees and voted to supply funds to help the workers try to secure a living wage.