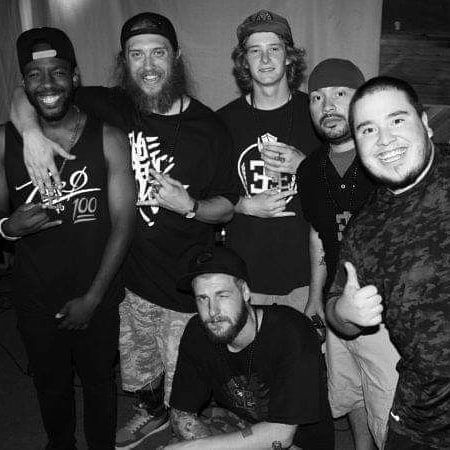 The Earthlings Crew is: Jordan Yocum aka Axiom Tha Wyze, Andrew Heikkila-Palacio aka Andy O., Gage Anderson aka ATG aka Alexander The Greatest, Eric Munez aka Clev Speech, and Cornell Johnson aka ZERO. 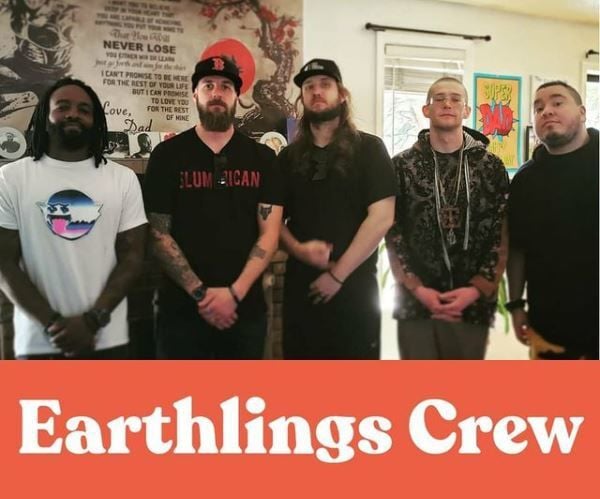 The Earthlings Crew is: Jordan Yocum aka Axiom Tha Wyze, Andrew Heikkila-Palacio aka Andy O., Gage Anderson aka ATG aka Alexander The Greatest, Eric Munez aka Clev Speech, and Cornell Johnson aka ZERO.

Boise has a lot of music, but one genre that sometimes gets left by the wayside is hip-hop. People may not think Boise when they think hip-hop, but maybe they should. There are a lot of different artists here that put out a ton of music and try to support the culture of hip-hop as a whole. One of the more well-known crews is the Earthlings. They’ve been making music and doing shows for over 10 years and recently started working on their first official album.

BW got the scoop on who the members are, what the album is shaping up to look like and when people can expect it out. Being the creative and clearly collective crew that they are, each member answered a question. People can follow the crew on social media to get upcoming information on the release.

BW: What and who is the Earthlings Crew and how did it come about?

EC, Axiom Tha Wyze: The Earthlings Crew consists of five emcees: myself, Jordan Yocum aka Axiom Tha Wyze; Andrew Heikkila-Palacio aka Andy O.; Gage Anderson aka ATG aka Alexander The Greatest; Eric Munez aka Clev Speech; and Cornell Johnson aka ZERO. In 2013 Andrew, his now wife Miranda Palacio and myself started an entertainment company created with the sole focus to bring positivity to the community and cultivate a Hip Hop culture locally in Boise. This venture grew and shrank over the years. We were a large group of artists, dancers, DJs, and all around creatives that threw events and donated profits to causes we believed in. Over the years as we evolved and grew older most people remained friends but ultimately pursued their passions through different avenues. Even the Earthlings Crew of emcees have pursued solo music careers. However, we have always stayed close friends and have finally put our collective talents together for our first Earthlings Crew album, titled It’s About Time. We have always supported each other’s music and thrived off of competing with each other lyrically, so I am extremely proud that we have been able to put this project together and release it for our friends to hear.

BW: For people who aren’t familiar could you describe the style of hip-hop you do and perhaps explain what you’re trying to convey with your music?

EC, ATG, AKA Alexander The Greatest: Our aim has always been to inspire people. As a group/collective we all bring something different to the table, recording booth, or stage. Ultimately though we all have a deep respect for the culture of Hip-Hop and what it represents. Peace, love, unity and having fun is always the main goal, but we all have a truth to speak as well. Like all artists, we aim to paint a picture one way or another and to deliver a good performance anytime you see us on stage.

BW: How robust is Boise’s hip-hop community and what would you say is unique about it?

EC, Zero: In my opinion, at the moment, Boise’s hip-hop community isn’t too strong. There was a few years from about 2014 to about 2017 that I would say Boise’s hip hop scene was on fire with amazing talent and artists pushing one another to become better and supporting one another. Compared to now, everyone’s kind of either sizzled out or doesn’t get along with someone in the crowd and it’s really put a divide on what we’re trying to do out here. Everyone has their sense of what hip-hop means to them and what they bring to the table, but then Corona hit in 2020 and shut everything down for everybody. So then, we were forced to face our demons we’ve been battling with one-on-one. And some didn’t make it out who they were before, if that makes sense. One thing we earthlings take pride in is making music to lift the masses. We’ve always wanted to motivate and inspire the world regardless of who’s listening to our music. Doesn’t matter what gender, what race, what religion, hell if you’re even racist because what we’re trying to do is bring about peace through knowledge and experience. I do have faith that the scene will rise again because there are so many hidden gems in Boise that need to be heard. And as always, we Earthlings got work to do!

BW: Has Earthlings music evolved a bit over time, or do you still follow the same formula?

EC, Clev Speech: I’d say the music constantly grows, but the formula stays the same. Evolving with the times is a must, but you’re only as strong as your foundation, which I feel we’ve maintained over the years. While it can be hard at times for all of us to be in the same room, we’re also getting better as individuals with all our solo projects, so whenever we DO get together, we’re sharper than we’ve ever been!

BW: You have a new album, It’s About Time, out soon. When is the release date, and can you speak to what people can expect?

EC, Andy O.: As individuals, the five of us have our own flavor that we want to put in your ear, developed with practice, experience, and matured over time — but when we all come together to do a show or a project, it’s like the Colonel’s blend of secret spices. To use another food cliche: peanut butter is awesome on its own, jelly is awesome on its own, and though there have been many others since, sliced bread is the original “best thing” — but there’s still something about a well-made PB&J sandwich that elevates it above the three ingredients that make it. Mix that with instrumentals from local and regional producers and boom bap legends like Weighn Beats, Sureburt, AJ Munson, our own ATG, and you’ve definitely got more than just the sum of the parts. The end result is an organic, nostalgic take on hip hop as a genre and culture from a diverse Boise crew. The Earthlings have been together for almost 10 years now, and we’ve rocked so many shows in Boise, the NW, and other parts of the country in the last decade, putting out our own projects as individuals in that period as well, but this is still our first official album. I’m glad we took the time to sharpen our swords and perfect the craft, because I think it shows through on the album and ultimately makes it better... but damn... it’s about time.

We don’t have a hard release date yet, and it’s mainly because I’m the type to work on projects until the last minute. We’ll probably drop it guerrilla-style, so in the next couple weeks/months it’ll materialize without warning and start banging on people’s eardrums. I do know that we’re planning on releasing a deluxe version of It’s About Time in September, during Treefort, which will be the original album with a B-Sides of additional material that won’t make it to the standard release.