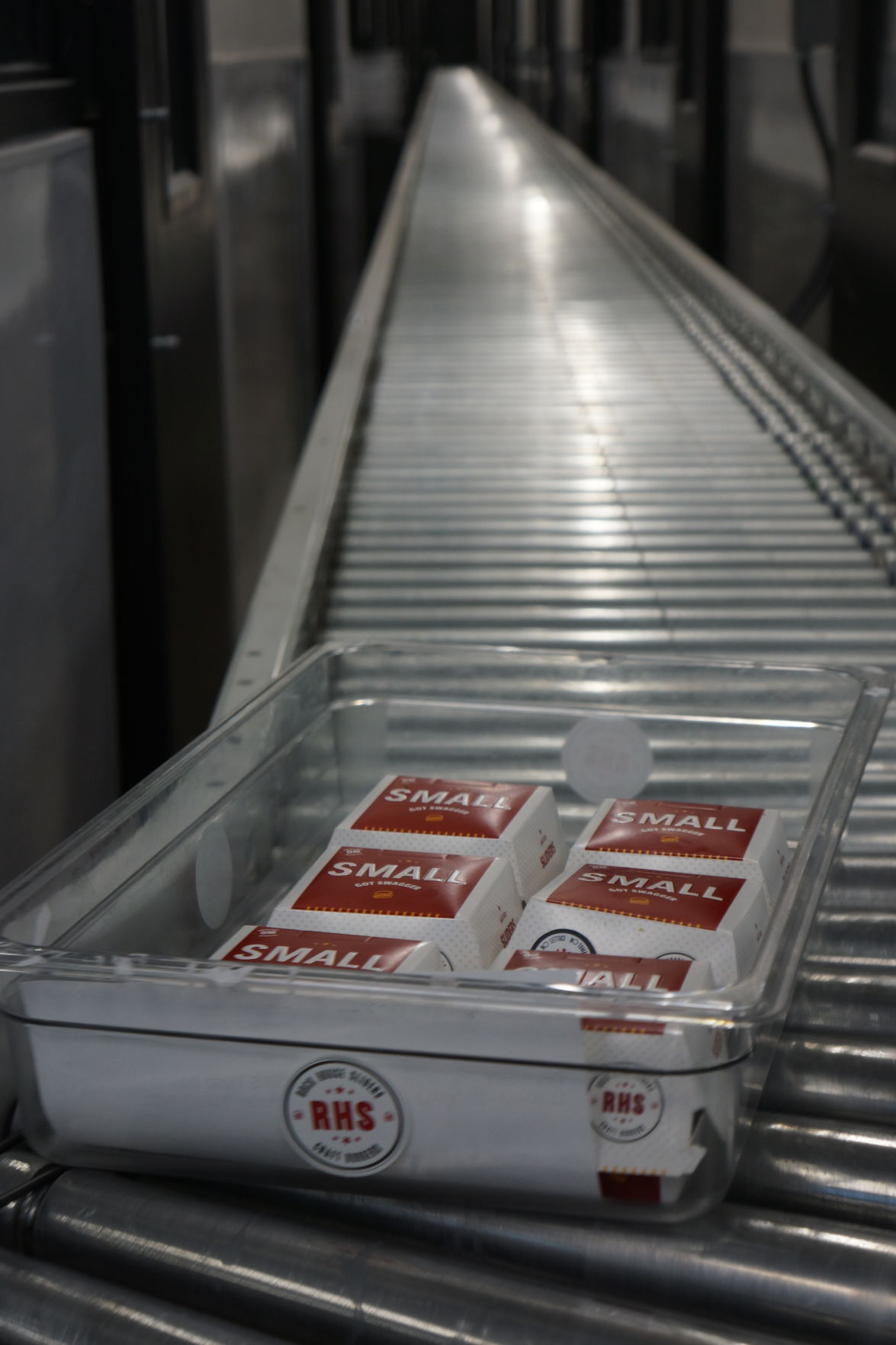 (Left) Crave employees place food in a heat-sealed container before sending it out for delivery. (Right) A Detroit-style pizza from Tony G’s, which has a kitchen in Crave’s Meridian complex. 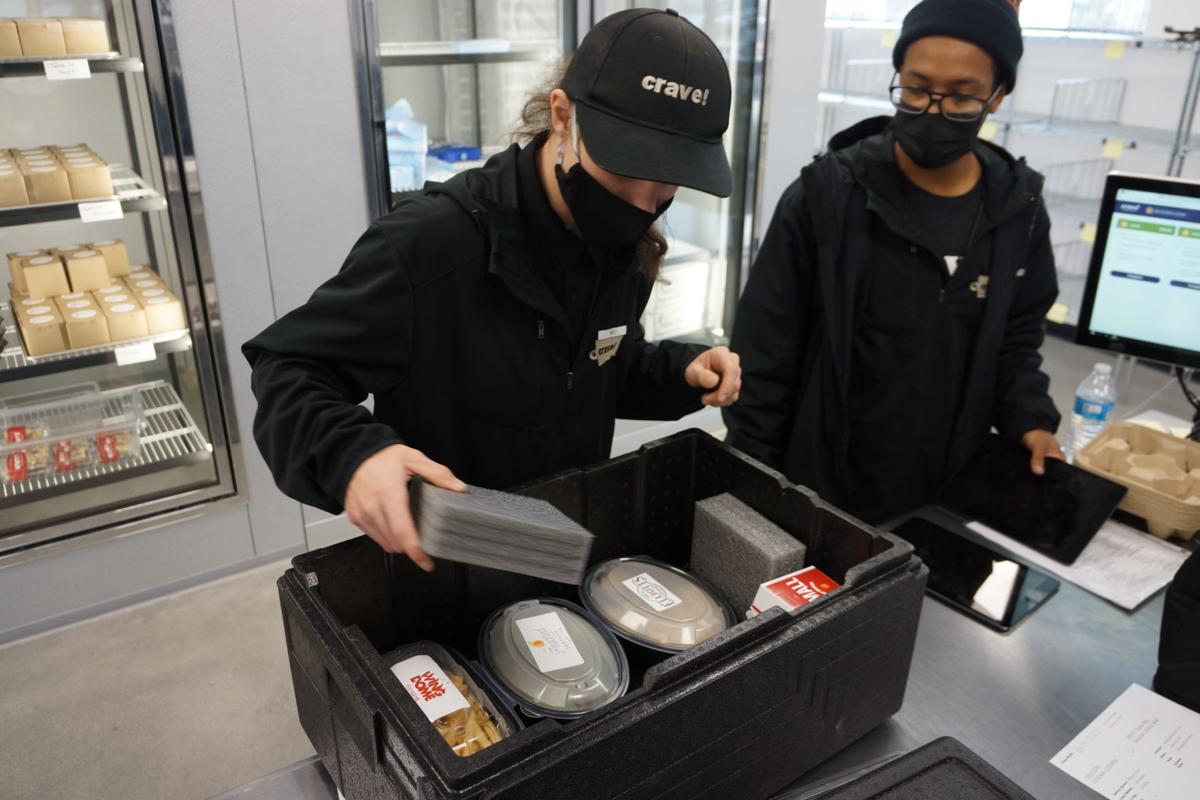 Crave employees place food in a heat-sealed container before sending it out for delivery. 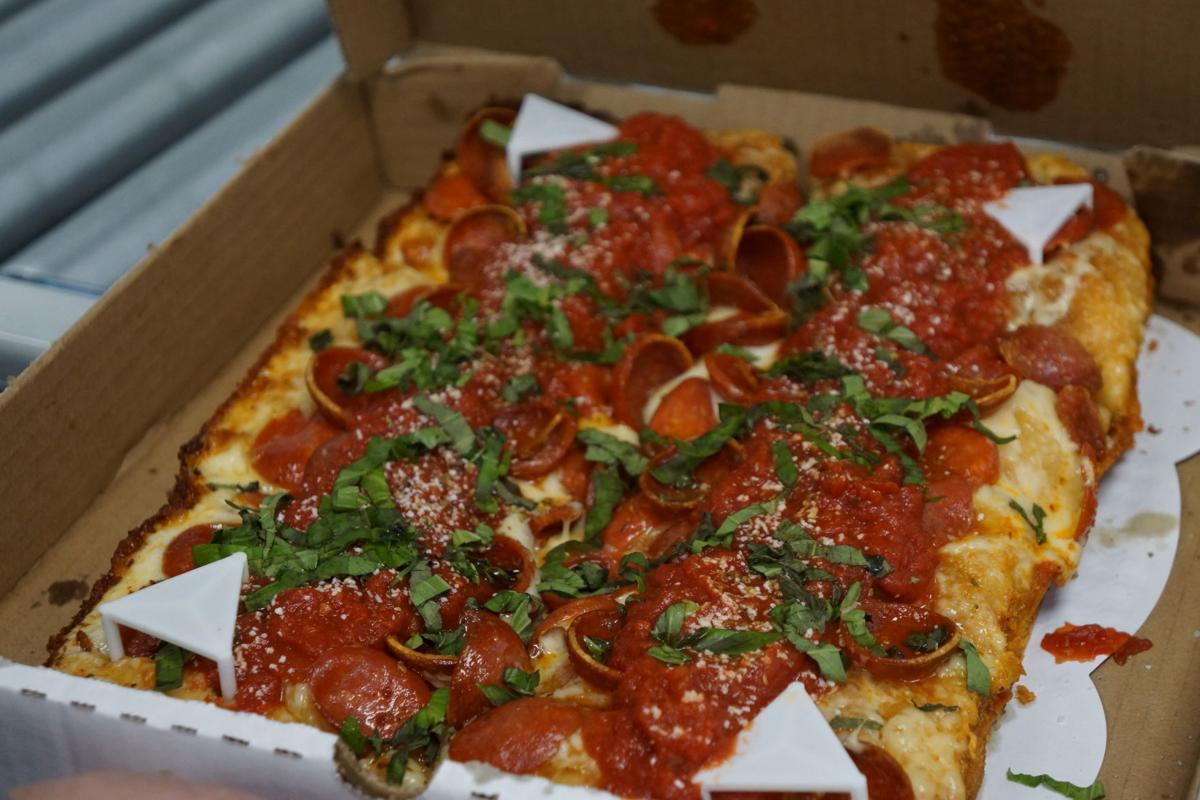 A Detroit-style pizza from Tony G's, which has a kitchen in Crave's Meridian complex.

(Left) Crave employees place food in a heat-sealed container before sending it out for delivery. (Right) A Detroit-style pizza from Tony G’s, which has a kitchen in Crave’s Meridian complex.

Crave employees place food in a heat-sealed container before sending it out for delivery.

A Detroit-style pizza from Tony G's, which has a kitchen in Crave's Meridian complex.

There are 17 kitchens in Crave’s new 15,000 square-foot facility in Meridian. Running straight through the middle of them like the Nile is a long, brushed aluminum conveyor belt that delivered, right on time, a Detroit-style pizza from San Francisco-based Tony G’s, packed in a cardboard box that billowed steam when Boise Weekly opened it.

Were this an ordinary order at Crave, the pizza would then be packed in a black hot bag, bundled with whatever else the customer had ordered from any of the other participating restaurants, and shuttled directly to the customer using one of the cars from the company’s 35-vehicle delivery fleet. Think of it as a food court, but instead of customers showing up looking for dining variety, the food court delivers.

We aren’t talking about the usual food court fare, either. Tony G’s is a product of Tony Gemignani, a 13-time World Pizza Champion. Three of the restaurants—Mac ‘n Cue by International Smoke, StirFire and Tokyo Hot Chicken are fronted by Michael Mina, who has a Michelin Star each at his San Francisco and Las Vegas restaurants. San Francisco Mandarin restaurateur Cecilia Chiang, who died in October of 2020, designed the menu for Betelnut. Los Angeles-based Matthew Biancaniello, the author of Eat Your Drink: Culinary Cocktails, is attached to Wicked Elixirs. There’s even a hometown favorite in there: The Grove is a new concept by downtown sandwich shop and vegan fare powerhouse Lemon Tree. There are sliders (Rock House Sliders), patisserie (Mérité), Asian cuisine-inspired tacos (Austin, Texas-based The Peached Tortilla) and wings from Seattle-based Wing Dome.

In all, 14 restaurants have leased micro-kitchens, each no more than a few hundred square feet in size. There is room for two more tenants, plus a test kitchen. Despite the firepower, Crave CEO and Founder Devin Wade said he doesn’t think of other restaurants as the competition.

The Meridian location will be the national headquarters, and the buildout has been extensive, totalling approximately $10 million, though Wade said future locations will be less expensive because the cost for developing machine learning technologies, an app and the other software that makes this big clock tick have been front-loaded ($3 million-$4 million, he said). That tech synchronizes orders across multiple kitchens to a smartphone application that allows customers to order across their multiple menus. Over time, the app will assign deliverers to cities and even neighborhoods, establishing a familiarity between customers and servers that goes a bit beyond what you’d expect from similar services like Uber Eats.

Originally, recruiting talent to Crave kitchens was the hard part. Restaurateurs saw little need for contactless delivery or diverting resources from their dining rooms. Then, the pandemic hit. Pre-COVID-19, most restaurants were divided between their kitchens and serving areas. Crave, conceived well before the advent of the pandemic, anticipated a future market for fine dining, but wasn’t in line with then-current trends. When disease cut into people’s willingness to go to sit-down restaurants, a number of chefs sought relief in fine dining concepts that defined “hospitality” a little differently, and quickly came around to fresh ideas and alternative ways to expand.

“The chefs took longer,” Wade said. “COVID changed that situation. These chefs existed in worlds that were there for hospitality. It could be delivered at a high level inside their spaces. That was a harder conversation to have, but when COVID hit, inside their own four walls, they were forced to react.”

Crave’s owners always intended to export their concept, and the company already has its next four locations planned out: two in the greater Dallas, Texas, area; and another two in Utah near Salt Lake City. They’ll roll out in 2021, with even more Craves expected in the coming years.

With so many options, however, Wade told Boise Weekly the Boise area was an ideal place to introduce it. With so many transplants from California, Oregon, Texas and Washington moving to the Treasure Valley, the region is experiencing tremendous growth. Many of these transplants follow food blogs, watch cooking shows and have four- to five-person families to feed. They also tend to be more affluent. Increasingly, it’s a place where people have interest in food and money to spend.

“Boise’s a perfect example of that in terms of fast-growing [cities], young professionals in the area and expanding families,” Wade said.