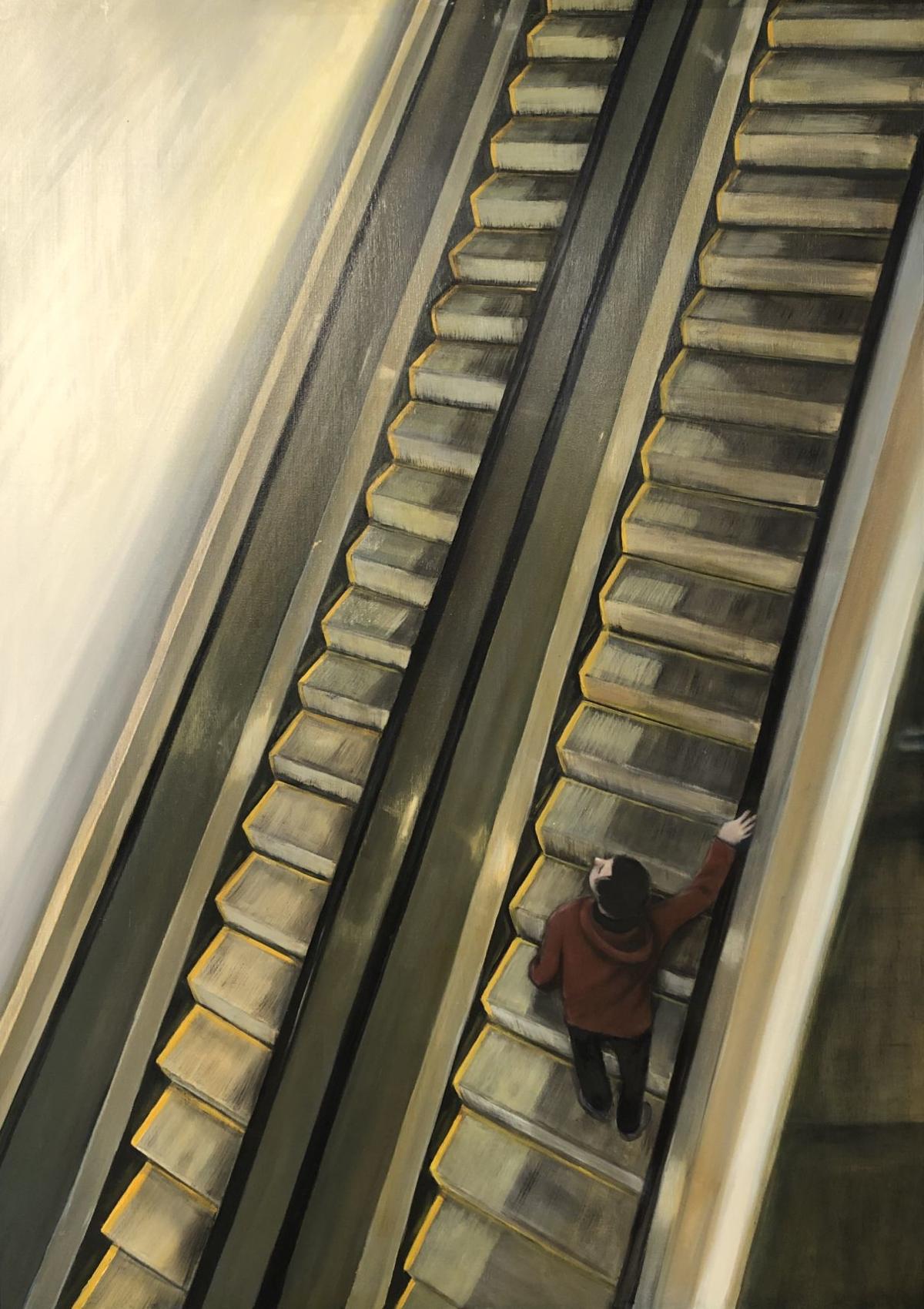 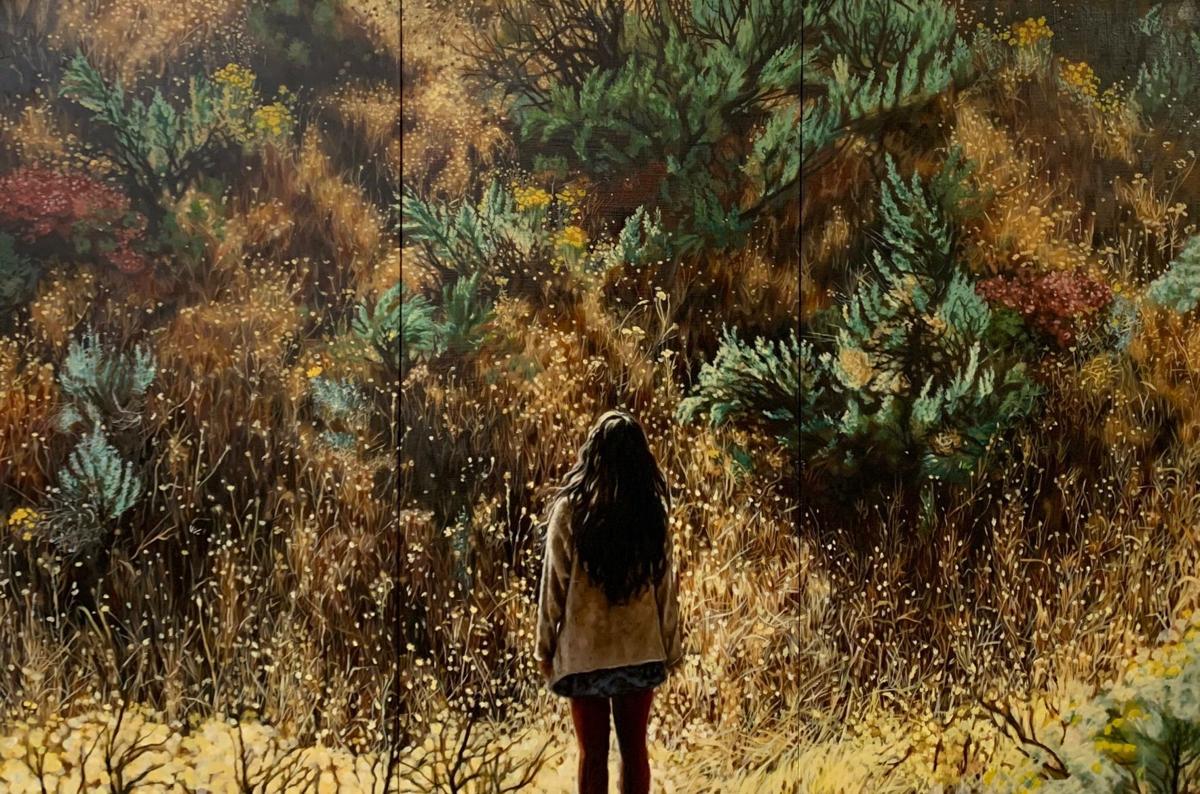 It is entirely appropriate that Erin Cunningham and April VandeGrift are showing together in an exhibition opening Friday, March 6, at the College of Idaho’s Rosenthal Gallery. Rarely do two well-established artists, each successful in their own right, have such a symbiotic professional and personal connection. Both are graduates of the BFA and MFA programs at Boise State University and are now art department adjuncts (Cunningham at BSU and VandeGrift at C of I and College of Western Idaho.) They have a close working relationship and share a large open-space studio where they make art practically side by side. And together they are in the midst of important changes in their work. The show’s title, Sea Change, is as applicable to the art of each of them individually as it is to both.

It is an exhibition that documents a departure from both artists’ existing portfolios to an art informed more by matters concerning social and environmental issues and perspectives. Anxiety in its various forms comes into play, and an undercurrent of disquiet is present throughout this exhibit. The artists have turned to landscape, urban scenes or figurative subjects as vehicles for exploring new terrain.

Erin Cunningham, a recent survivor of the physical and mental trauma of cancer treatment, is transitioning to a new pictorial vocabulary. It is mostly through landscape and environmental subjects that she expresses continuing issues of fragility and anxiety. And there is more than a tinge of romanticism in these works, evocative of Caspar David Friedrich and Andrew Wyeth’s solitary figures communing with nature. In “Harvest,” a young woman with her back to the viewer stares at a looming slope of high-desert grass and shrubs as if in a trance. The darker side of that vision is depicted in Cunningham’s large-scale dramatic painting of a ripped-open deer carcass lying in ocean beach grass, implicating the romantic fetishism of the fresh kill.

Her oils on panel series of three, collectively titled “Some of the Stages of Grief,” are elegiac landscapes. They include a single tree rendered in black that reads as a sentinel figure in mourning, a hermitic mountaintop scene and a celestial light emerging from behind dark clouds—a reference to “the edge of the cosmos.”

Cunningham tugs at our heartstrings in the lovingly painted “Homesickness” with choking blue smoke enveloping trees on the threshold of disaster. But she also reveals her signature playfulness in “Shallow End,” in which youngsters swim half submerged with only their upright, kicking legs showing—a nice break from the moodier work.

April VandeGrift’s portfolio has included fanciful, allegorical paintings and drawings in which emblematic portrayals of animals and people explore correspondences between the imagined and the real. In her turn to contemporary city/landscapes VandeGrift leaves this rarefied realm to focus on what she sees as a new existentialism characterized by widespread feelings of estrangement and lost fulfillment. An ever-present human footprint on the environment is the theme that runs throughout her artwork here. The irony of the fact that a self-imposed loneliness is experienced in the midst of multitudes is not lost on the artist. It is implicit in her imagery.

VandeGrift is good at putting us in the role of active outsider, making us feel self-conscious in the face of what we see, playing off our own insecurities. She is fond of nocturnal settings and her renderings of night skies make a strong impression. The very dark “View of Whidbey Island” is a dramatic study in noir blacks and blues that has a singular presence in the room. In “A View of Texas,” the nighttime aerial scene reveals a sprawling, lit-up cityscape below that seems to spread out maliciously like a virus. Stranded in our airline window seat our own feelings of isolation and loneliness are palpable.

It is in VandeGrift’s urban scenes that we witness a different, more immediate drama. In these, her work harkens back to the paintings of Edward Hopper, in which lonely souls in dreary commonplace settings fail to interact with others, exhibiting a strange inertia in a world deadened by infrastructure and self-enforced conformity. But VandeGrift takes these scenarios further. In “Ascending,” the lone figure is both physically and psychologically diminished, tentative in being at the mercy of an immense machine in a deep, concrete cavern. Unlike with Hopper, here we can empathize. There is also her “View from Below,” which is designed to induce vertigo in us as we stare up at a towering apartment building with tiny balconies and skimpy railings over which one tenant precariously, yet nonchalantly, leans. The deserted street and business in “Evening at a Convenience Store” is eerie in its emptiness and brash lighting.

Particularly intriguing are VandeGrift’s three voyeuristic ink and watercolor “Community” drawings looking in on inhabitants of apartment spaces. She has adroitly crafted framed windows out of archival matboard, turning us into peeping toms as we spy on individuals hanging out in empty rooms, absorbed in their cell phones, asleep on the couch, etc. Their apathy and general demeanor speak volumes.

Cunningham and VandeGrift jokingly refer to themselves as the “art twins” (aka #artwives) and there is some truth in this. They are certainly kindred spirits. As teachers and friends, they are inclined to give feedback, toss around ideas, discuss things like color theory, jointly resolve problems and just generally brainstorm. As a result, they end up influencing and inspiring each other. They are two shipmates negotiating agitated waters in a vessel called Art.

A ‘sea change’ is in the works