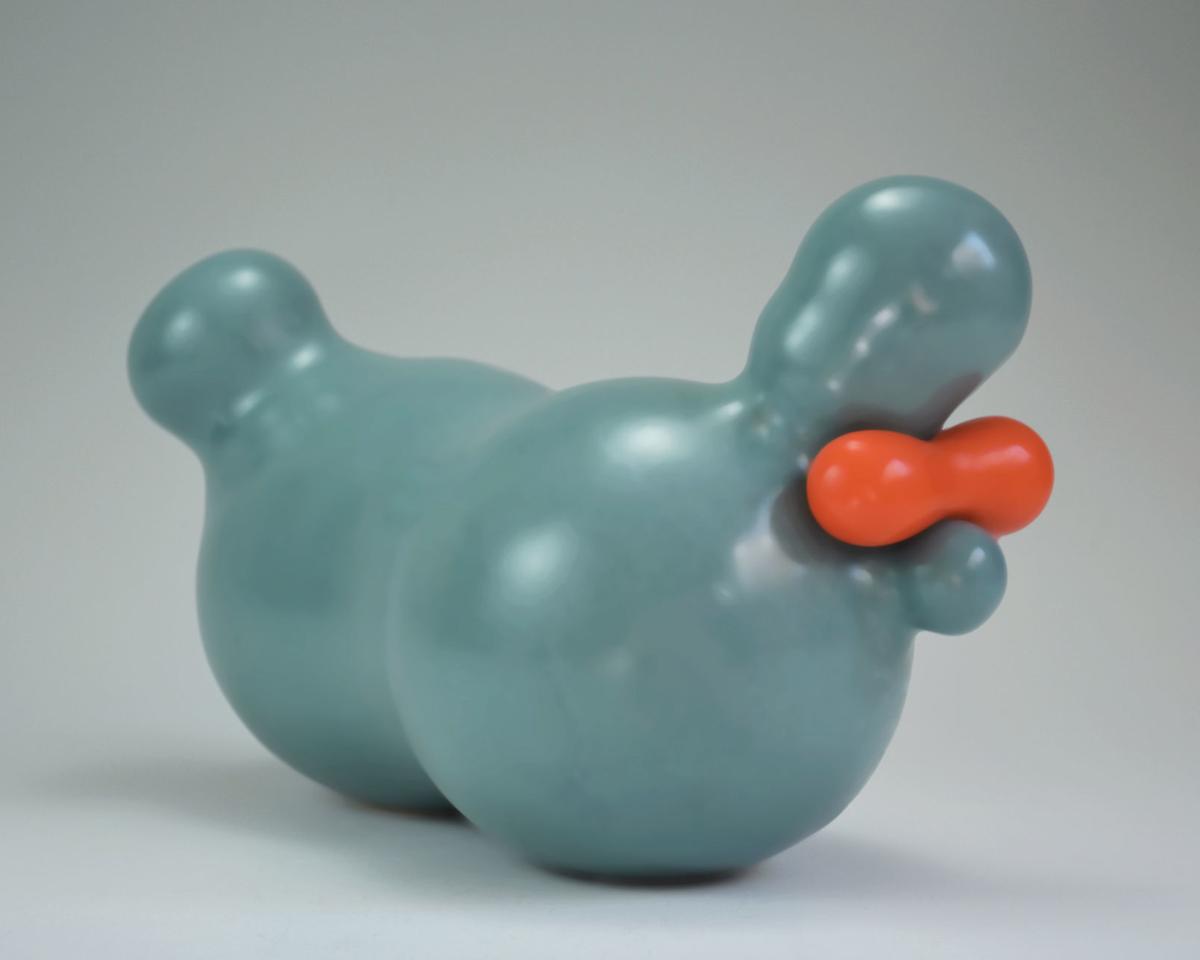 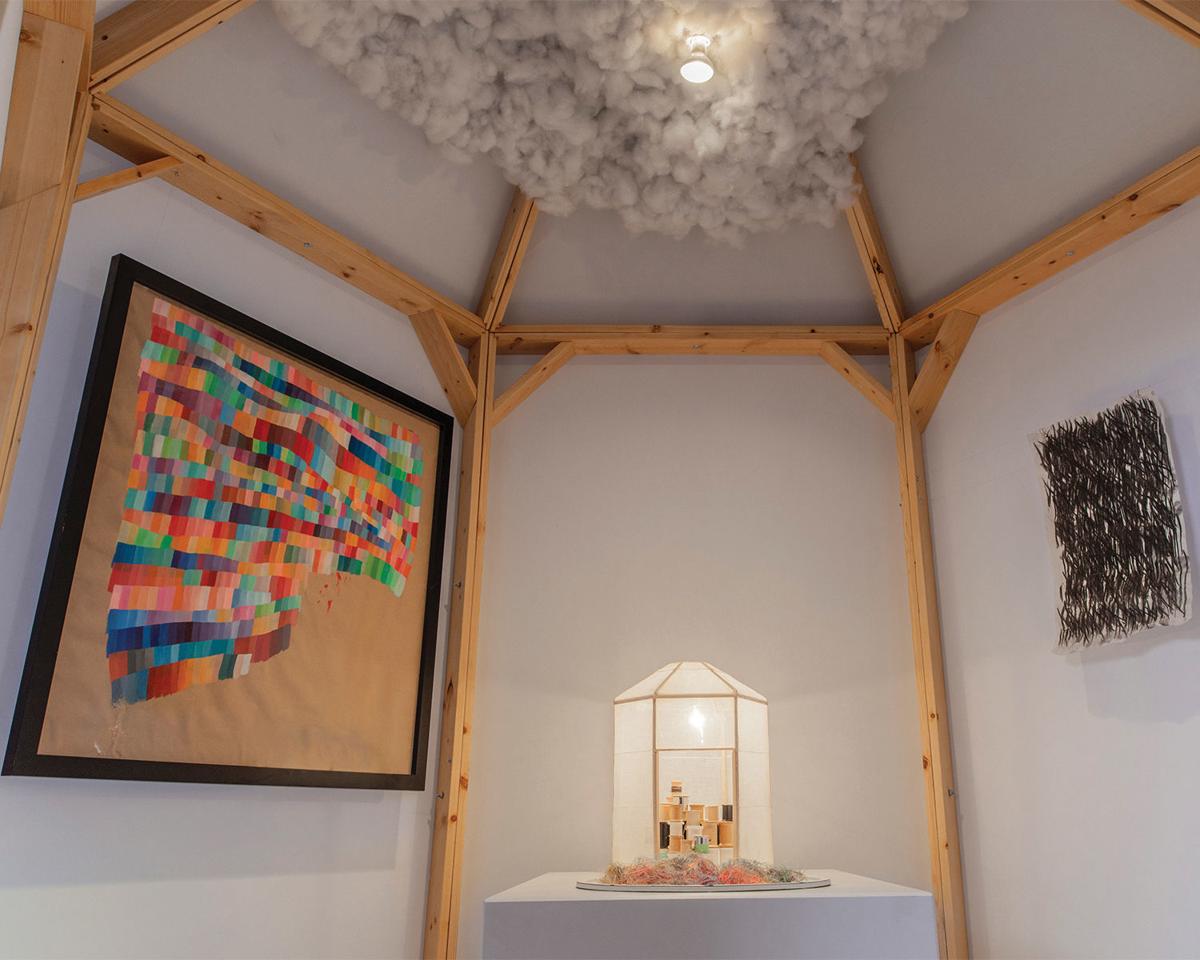 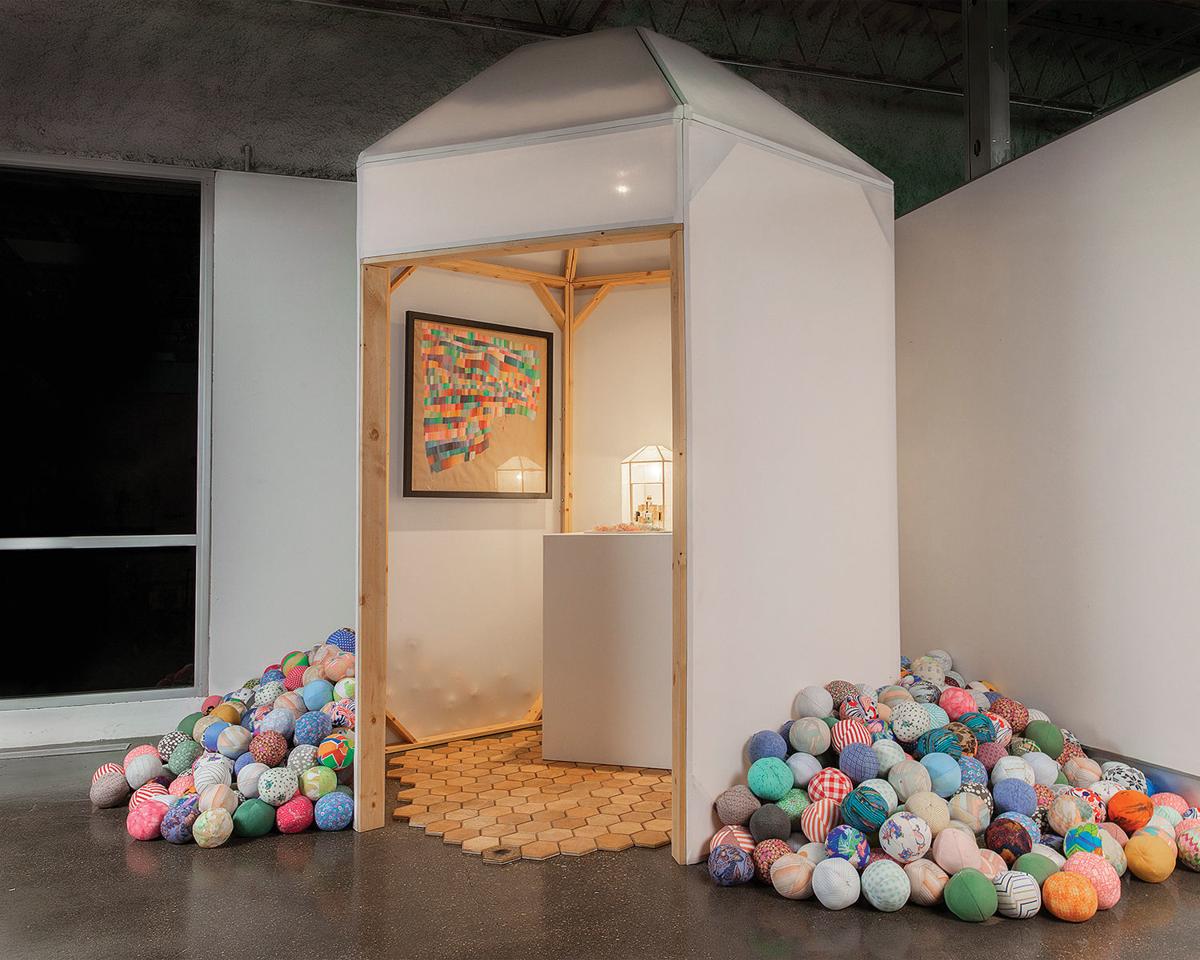 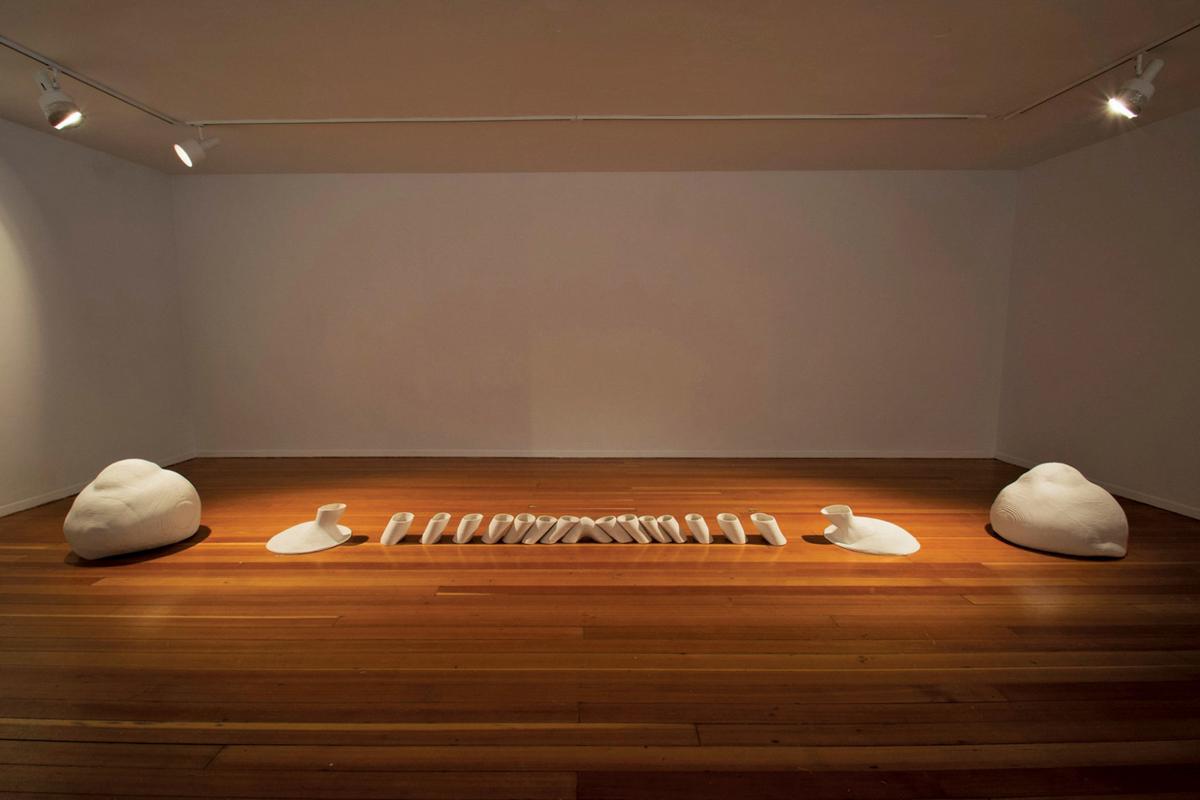 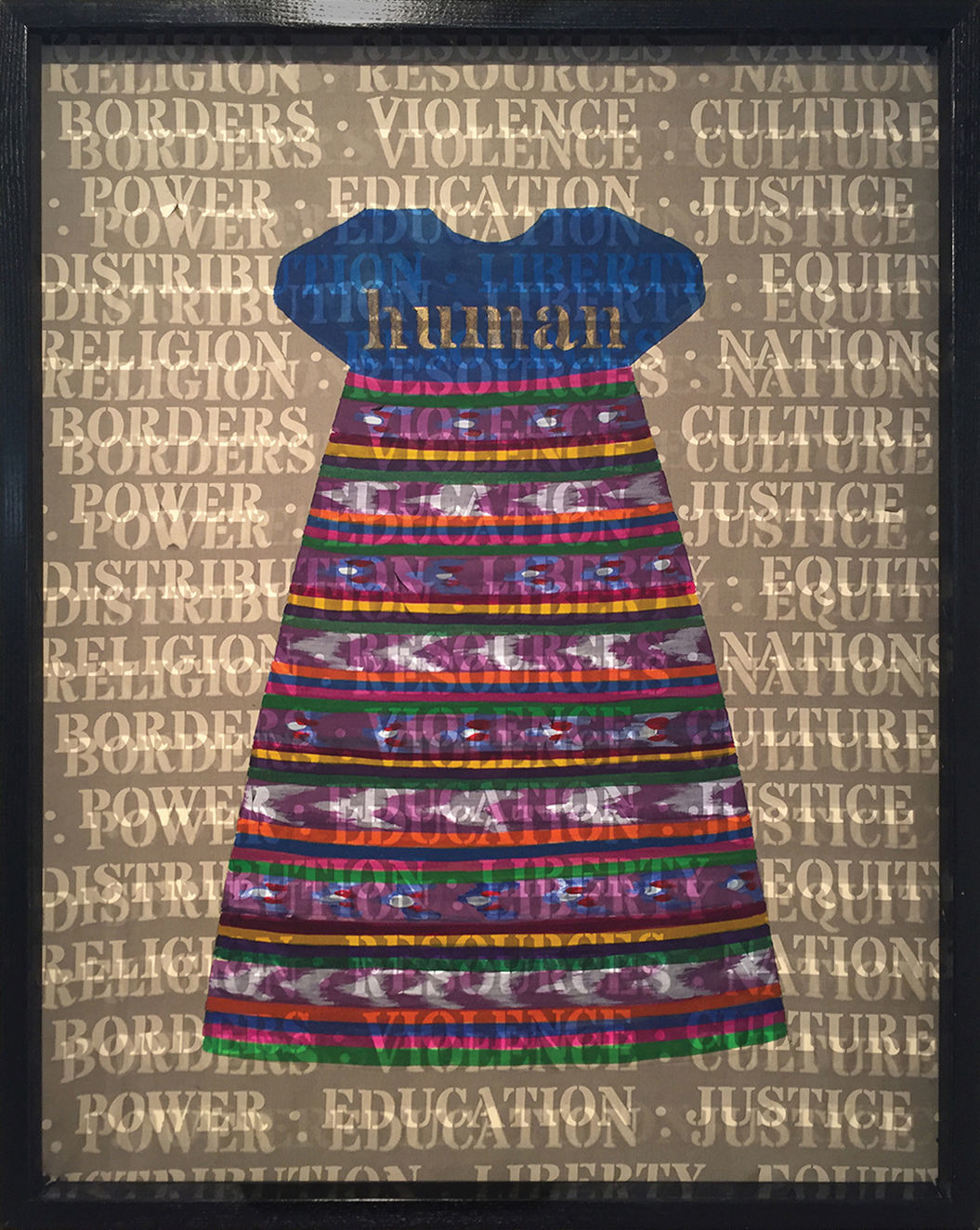 One of the most important contributions the Boise Art Museum makes to the cultural life of this city, indeed the state, is the Idaho Triennial. With its once-every-three-years survey format, this is an opportunity to conduct a sweeping consideration of what is currently taking place in contemporary visual art statewide, updating for us the work of familiar artists, acquainting us with new names and introducing the artists to each other, instilling a certain camaraderie. The Triennial is by its nature a very democratic institution, as all Idaho artists are invited to submit entries. This year 181 responded, and in the end, 23 artists were selected, all of them having the chance to exhibit more than one piece in a museum setting.

The juror chosen for this year’s event was Grace Kook-Anderson, the Arlene and Harold Schnitzer Curator of Northwest Art at the Portland Art Museum, a prestigious position. She had the daunting task of reviewing 935 images, finally choosing 47 works, which was quite a feat. Kook-Anderson said she appreciated the opportunity to see more of an artist’s work, as it allowed her to get a better handle on the concepts and caliber of the art.

This year’s Triennial is dominated by mixed media, video, found materials and sculptural art including combinations thereof. Viewers interested in straight painting may wish there were more of it, but the fact is it’s a diverse show that draws from all strata of culture.

A number of works explore environmental issues, e.g. climate change, pollution and imperiled sea life; but there is also a range of other subjects involving politics, immigration, gender identity, geography, science, history and landscape. The art here is for the most part sophisticated and, in many cases, challenging. In her forward to the catalog, Kook-Anderson writes of “works and artists pointing to quieter moments, offerings of a slower burn,” frequently addressing “urgencies we face today through the rigor of artmaking and from an underpinning of compassion.” It is a very apt description.

Many of the artists are master craftsmen, working with delicate or alternative materials. Upon entering the first gallery, we are immediately confronted by a 14-foot floor piece sculpted in porcelain by Joe Casey Doyle entitled "Nebulous." A scaled-up rendering of the human optic nerve with upright segments anchored by two end-pieces, cloud-like globes, at first glance looks like prehistoric reptilian vertebrae. Based on MRI imagery it has an otherworldly aura. Likewise, "Origins" by Clementine Wright is made of particularly fragile-looking, floating pieces of porcelain with gold luster and found beehive all connected by threads to the largest, suggesting a coalescing of fragments to form a nurturing whole—or in reverse a drama of disconnection and loss.

Video makes its mark in this exhibit, sometimes combined with other media. Probably the most immediate piece on climate change is Katherine Shaughnessy’s "Swallowed by the Sea," in which a time-lapse video shows a miniature olive tree diorama destroyed by water from melting ice placed above. Her point is clear—keep it up and we’ll be next. Erin Mallea’s captioned digital video (with accompanying artist notebook) of her work with biologists in the Malheur Wildlife Refuge in eastern Oregon is more a personal diary of an eye-opening intellectual adventure.

Projection technology plays a role in the work of two other artists here. Goran Fazil’s "Walkers" has animations of figures and objects seemingly emanating from and across a background of roughly textured concrete slabs, thereby simulating cave drawings in motion. Similar in feel are Luma Jasim’s powerful mixed media paintings incorporating historical stone relief scenes of ancient warriors in battle. In "Frozen Roots II," projected animation puts the relief figures in motion, charging across the surface weapons in hand. Jasim is originally from Iraq, and that country's history of war and political violence, as well as her interest in historical Mesopotamia, clearly informs her art. She tells us she often uses tar or motor oil in her paintings referring to the underlying cause of the turmoil and pain in the region.

The imagery of Peruvian-born painter/trickster/joker Veiko Vladimir Valencia Pacheco bursts upon this mellow exhibition like a wake-up call with his assertive, self-promoting poster. His companion piece "Humanitas" is part memento mori, part Basquiat graffiti. On the flipside there is Laura Ahola-Young’s mixed media paintings: They may be minimalist, but nonobjective they are not. Interested in identifying and recreating ethereal patterns and phenomena in nature, her flowing images resemble closeups of pine needles in the wind, depicting the biological and the sensory at the whim of the elements.

In photography, Timothy Frazier’s group of three disturbing images collectively titled "Holding on to the Dark" are scenes taken inside an oppressive Philadelphia prison that was in operation from 1820 to, amazingly, the 1970s. There the inmates were held in solitary confinement for “rehabilitation” purposes, which more often than not drove them insane. The grim images of deteriorating passages and corroded cells suggest an institutionalized Inquisition. The title of one, "No Parole," says it all. Photographer Robert Snyder’s large inkjet prints are emblematic images of individual items of human detritus that interestingly achieve a certain grandeur in their presentation. Milica Popovic’s photography-based mixed media installation continues her remembrances of childhood and homeland.

Sculptor and graphite artist Michael Cordell exhibits in both media. He is drawn to them for their expressive physicality and how they lend themselves to an abstract bent. His series of squat, coated steel characters, only inches high, resemble in various ways chess pieces or biomorphics or cartoons. In short, they are fantasy abstractions. His graphite drawings are based mostly on chance, and he uses unconventional tools and techniques to instill the work with a spirited momentum. Caitria Gunter is an artist whose lovely sculptural works are inspired by patterns and forms found in nature, especially those encompassing porosity and cellular growth. Her "Untitled" parchment sheet punctured with hundreds of pinpoint burns throws an ephemeral screen-like shadow. "Cellular Form," made out fabric and dipped in bees wax, becomes a skeletal abstraction glowing in the light.

Good things come in small packages. Dennis DeFoggi’s four quizzical colored pencil drawings on paper have a stream-of-consciousness look to them, coming across as accomplished but unplanned. Their playful aspect reflects his technique of “allowing a piece to happen.” Look at them as a window into a free-spirited creative mind. Karl LeClaire is a young printmaker whose delicate drypoint landscapes convey the parched aridity surrounding desert playas. He also has a talent for insinuating the human figure into his scenarios. Ceramic artist Caroline Earley’s sculptures are a combination of “the familiar and the absurd.” With brightly colored, soft and rounded components she teases us into seeing them as body parts, though they are not anatomical. Rather, they illustrate the physics of space, gravity, proximity of objects and their relational impact on form. And John McMahon, always the wit, provides us with a ceramic receptacle giving us the opportunity to financially support artists who make art that is “destined to be destroyed.” Here, the message is the medium.

The message artists Sally Graves Machlis and Delphine Keim send with their entry is that “women (sisters) are a force for justice and beauty.” Accordingly, their multimedia suite titled "Sisters in Migration" is a beautifully made, moving tribute to the trials of immigrant women and their children attempting to cross borders. Each of the four pieces refers to a country of origin: Guatemala, Mexico, Ghana and Syria. They comprise silk reproductions of girls’ dresses specific to their native culture and aesthetics that float above and within words depicting what you could call virtues (justice, hope, trust, brave, loving) and pain (borders, violence, power, scarcity, threshold.) It is a heartbreaker.

The exhibition closes with a life-size installation by Elijah Jensen-Lindsey called "Renewing the Infinite Vow." A detailed, labor-intensive work of art and heart, it is a walk-in chapel dedicated to “meditation and healing” where every detail and sacred accoutrement has symbolic and personal significance from the cotton-wadding clouds in the ceiling to the 720 fabric spheres surrounding the entranceway. Out of a scale model of the structure within, spools of surplus thread spill onto a speaker providing a rolling thunder that makes the structure shake—nothing too heavy, you understand. As the artist put it, "Infinite Vow" “elevates the mundane to the holy, and vice versa.” It took first prize.

The Boise Art Museum will be closed through Tuesday, March 31, due to coronavirus COVID-19 concerns.

Due to the outbreak of the coronavirus, the public is being asked to take hygienic measures including the regular washing of hands, keeping hands away from the face, avoiding large gatherings of people, and staying home from work and public places if one feels sick.