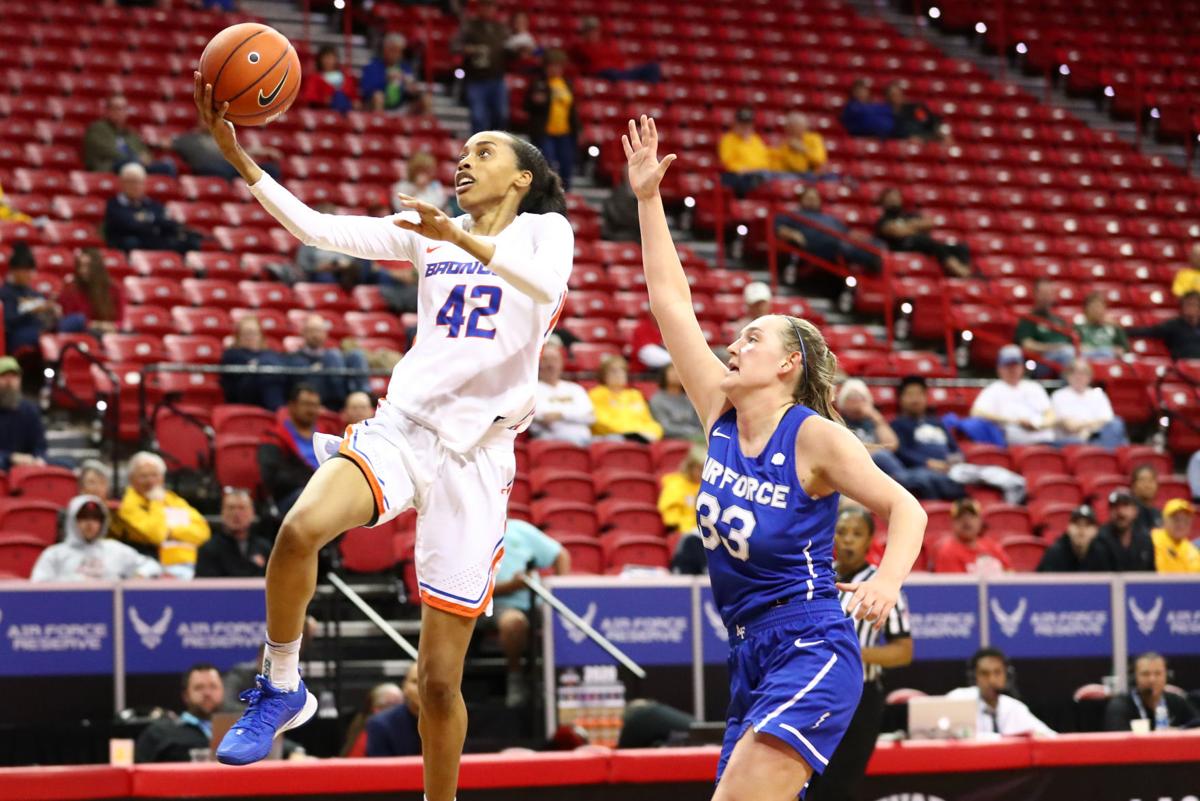 Boise State forward A’Shanti Coleman goes up for a layup Monday night during the quarterfinals of the Mountain West Tournament at the Thomas and Mack Center in Las Vegas. The Broncos topped Air Force 73-50 to advance to Tuesday’s semifinals. 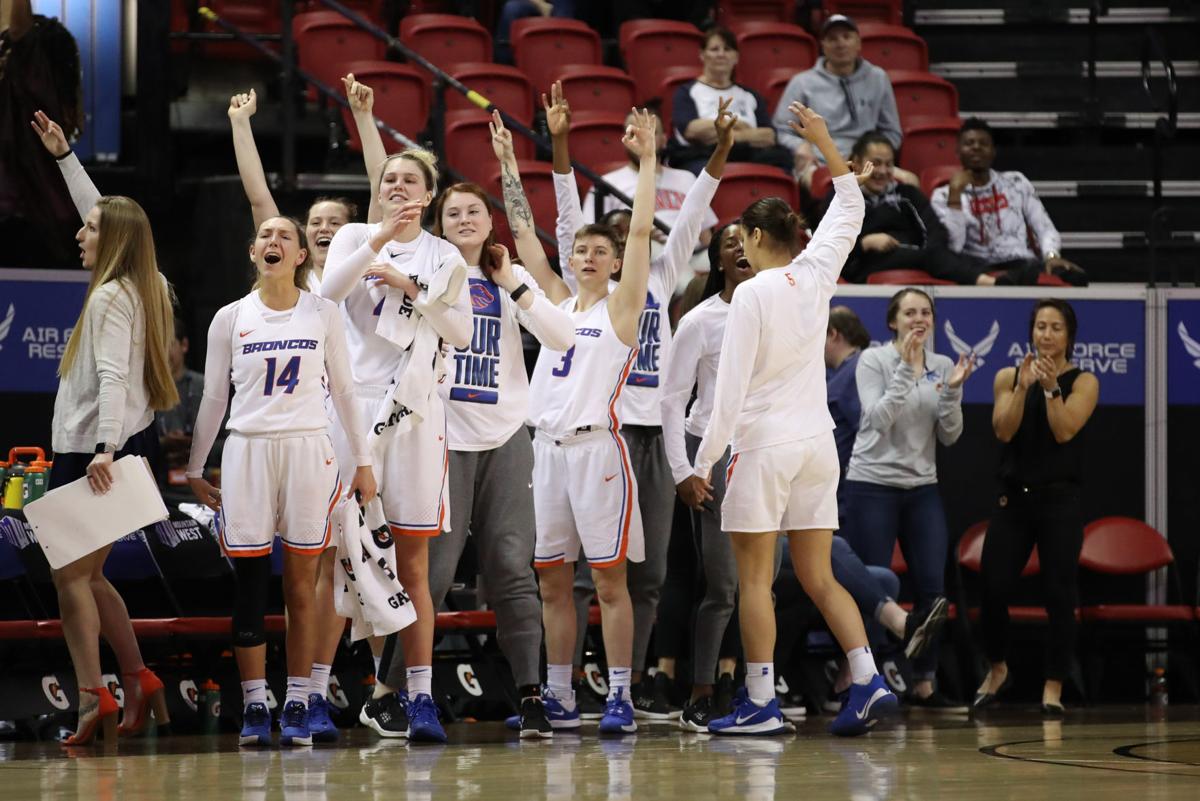 Boise State’s bench celebrates a basket during a 73-50 win over Air Force on Monday night in the quarterfinals of the Mountain West Tournament at the Thomas and Mack Center. The Broncos will play Tuesday night in the semifinals.

Boise State forward A’Shanti Coleman goes up for a layup Monday night during the quarterfinals of the Mountain West Tournament at the Thomas and Mack Center in Las Vegas. The Broncos topped Air Force 73-50 to advance to Tuesday’s semifinals.

Boise State’s bench celebrates a basket during a 73-50 win over Air Force on Monday night in the quarterfinals of the Mountain West Tournament at the Thomas and Mack Center. The Broncos will play Tuesday night in the semifinals.

The second-seeded Broncos, winners of the last three Mountain West Tournament championships and 10 straight games in the tournament overall, opened play with an impressive 73-50 win over Air Force Monday night in the quarterfinals.

Boise State (22-9) advances to Tuesday’s semifinals and will play No. 3 seed Wyoming at 9:30 p.m. back at the Thomas and Mack Center.

“We like to play in Las Vegas,” Boise State senior Braydey Hodgins said. “I think it’s some familiar territory and we’re super excited with how we’re playing so it’s even better.”

A’Shanti Coleman had a career high 23 points while Jayde Christopher had 12 points and 10 assists for the Broncos, who led by 18 at the half and coasted in the second half to an easy win.

Boise State had an odd conference season after being picked as the heavy favorites to repeat as league champions. The Broncos lost to last-place Utah State and blew double digit leads in four in of their five conference losses to finish at 13-5 and in second place behind Fresno State.

But back in Las Vegas and now two wins from reaching their goal of getting back to the NCAA Tournament, the struggles in the regular season seem like ages ago.

“I think they spent a lot of the year being a little bit bored because they’ve been doing the same thing for so long and it sort of lost its luster a little bit for them,” Air Force coach Chris Gobrecht said. “Now they are in the home stretch. I’d be shocked to tell you the truth, not shocked but a little surprised, if they didn’t win the whole tournament.”

Hodgins had 12 points, Riley Lupfer had 11 and Jade Loville added 10 off the bench for the Broncos, who shot 45.8 percent for the game and won for the sixth straight time after closing the regular season with five consecutive wins.

“I think you saw tonight how good they are,” Gobrecht said. “That’s a very, very talented team that’s been playing together for four years. They are very skilled.”

Christopher set the Mountain West single-season assists record in the first quarter when her fourth assist put her at 244 for the season. She passed the previous record or 243 set by New Mexico’s Cherise Beynon during the 2017-18 season.

“It’s amazing because I like dishing out the ball a lot to my teammates,” Christopher said. “It means a lot. At halftime coach mentioned it so I was really excited.”

Boise State burst out to a 14-5 lead but scored just two points in the final 6:17 of the first quarter and as Air Force trimmed the lead to 16-14.

Christopher and Hodgins added buckets and Lupfer nailed her third triple of the half with 15 seconds left to make it 39-21.

“It was their fourth game in eight days so we thought we’d really push the tempo as much as we could and try to wear them down a little bit,” Boise State coach Gordy Presnell said. “It was a good night for us.”

It was more of the same in the second half, as the Broncos pushed the lead to as many as 25 and emptied the bench midway through the fourth quarter.

It was the fourth-straight 20-point game for Coleman, who became just the sixth different player in school history to reach 20-plus points in four consecutive games.

“She’s really raised us to another level because now people have to worry about sagging off Riley to take care of A’Shanti,” Presnell said. “We stretch the floor so well when she runs down the middle of it. It’s been pretty fun to see this and I hope it keeps going and hopefully she can have another good game tomorrow.”

Boise State had hoped to already have an at-large bid to the NCAA Tournament locked up by this point. But a few bad losses and disappointing regular season has left the Broncos in the unwanted spot of having to win the Mountain West Tournament to get back to the Big Dance.

But the Broncos have already proven they can do it, and looked primed to take a run at a record fourth-straight tournament title with Monday’s blowout win.

“It’s not been a smooth sailing year and we probably over-scheduled a little bit before Christmas,” Presnell said. “We’re just starting to play a little bit better and faster and I think there’s a sense of urgency with six seniors. They want to something that no other team has done in this conference.”