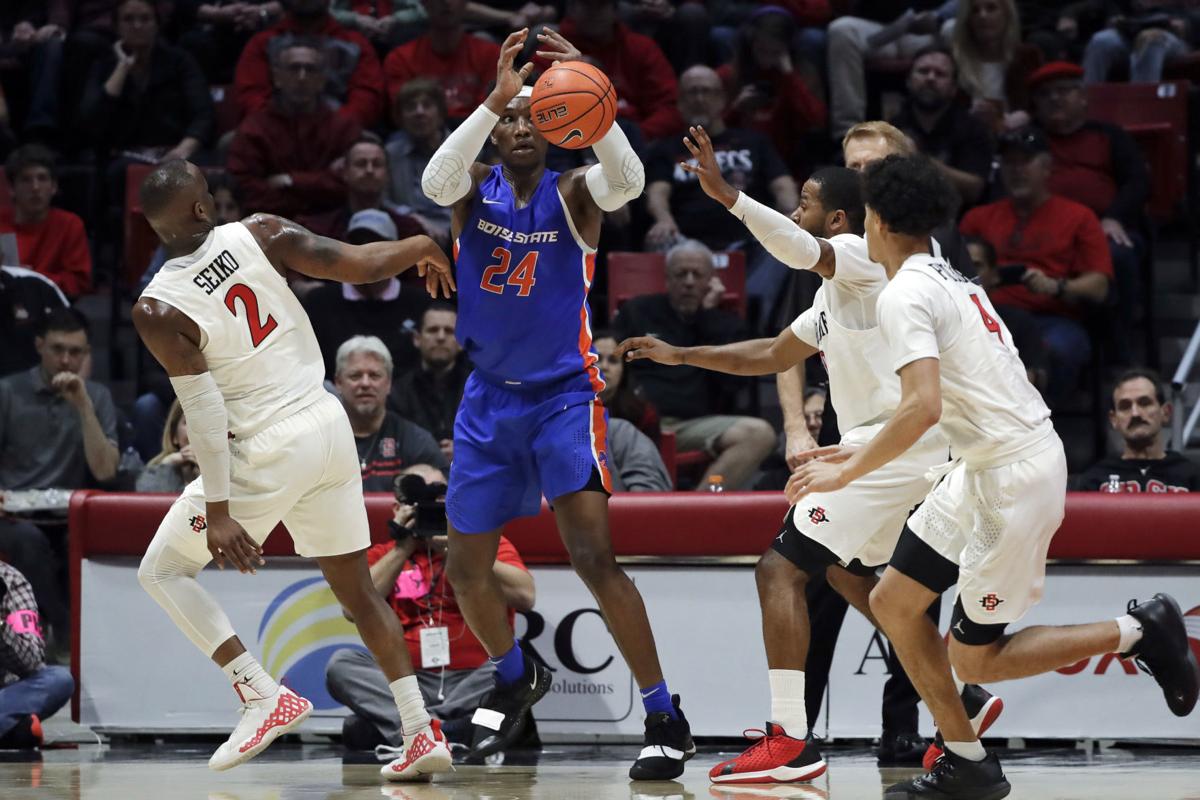 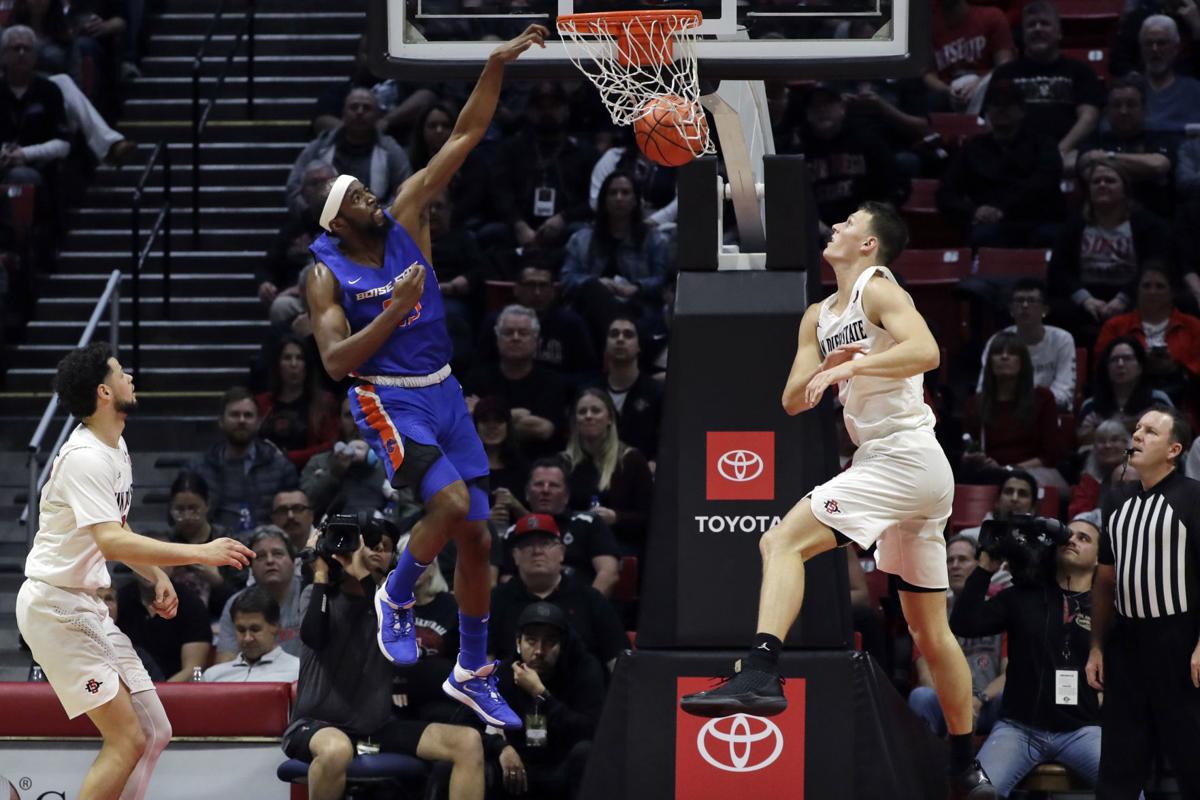 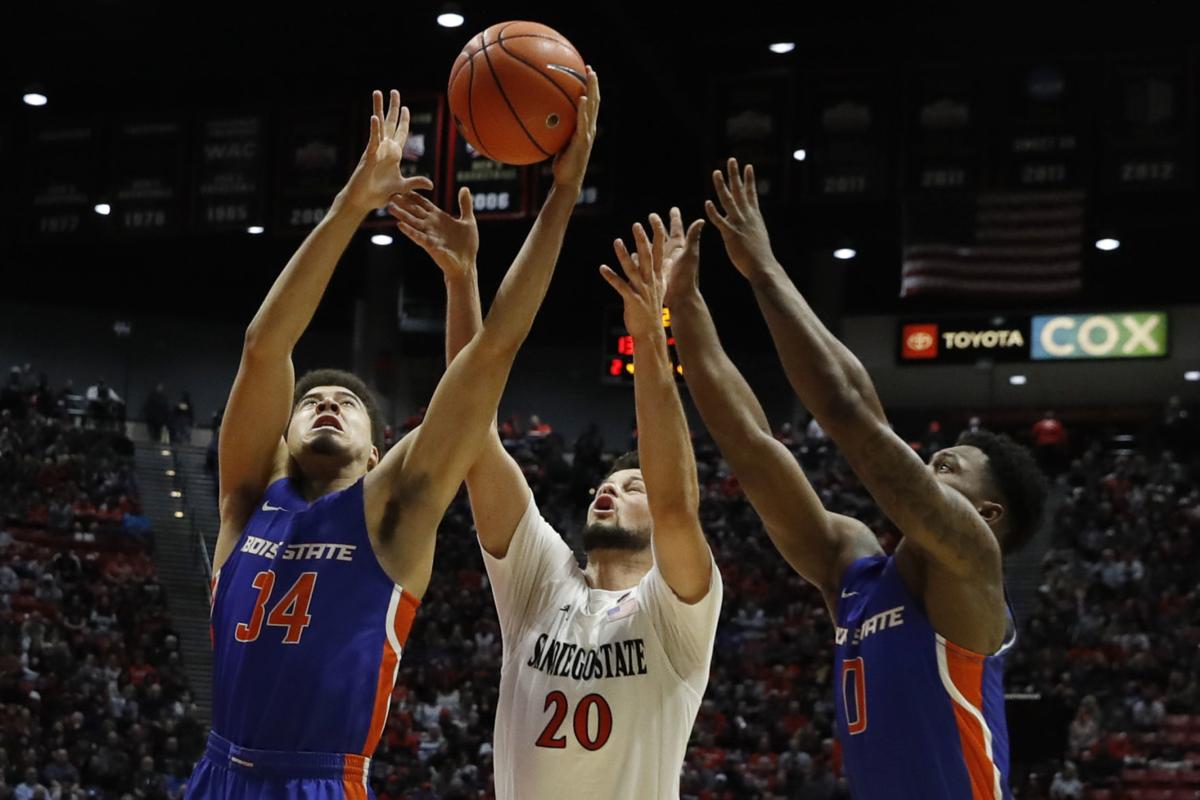 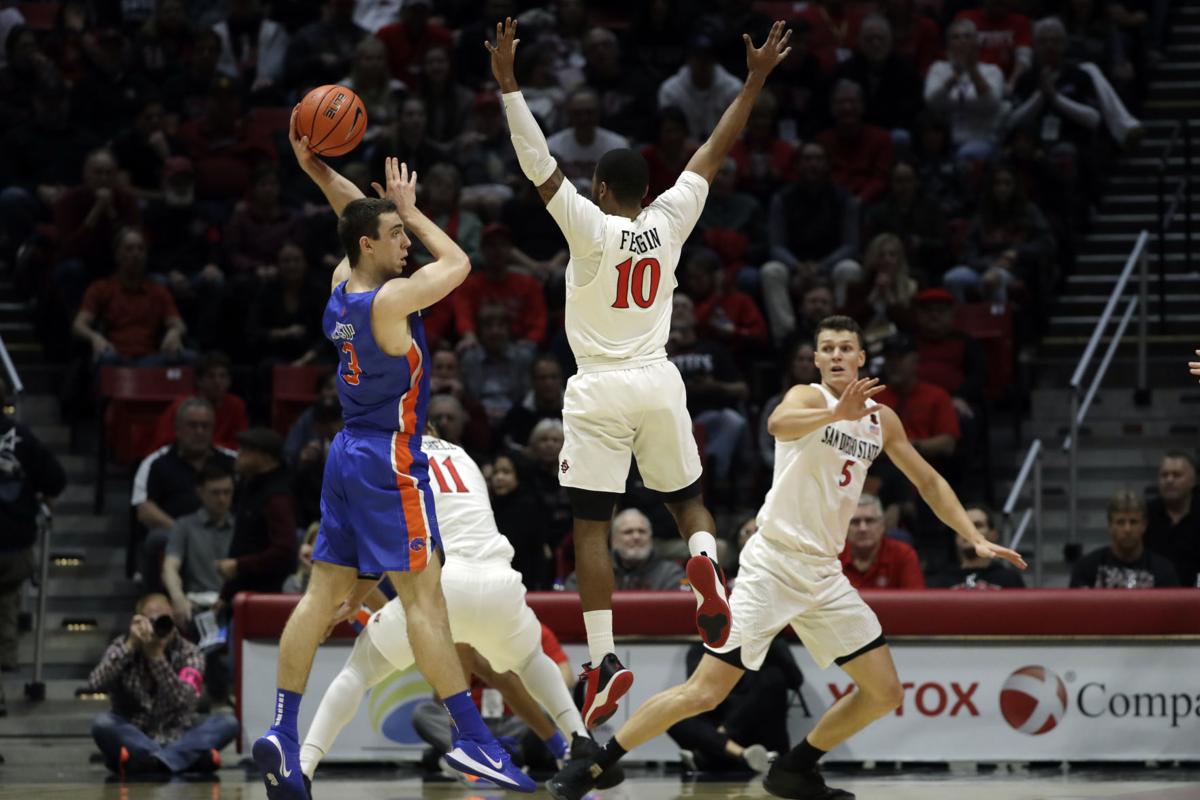 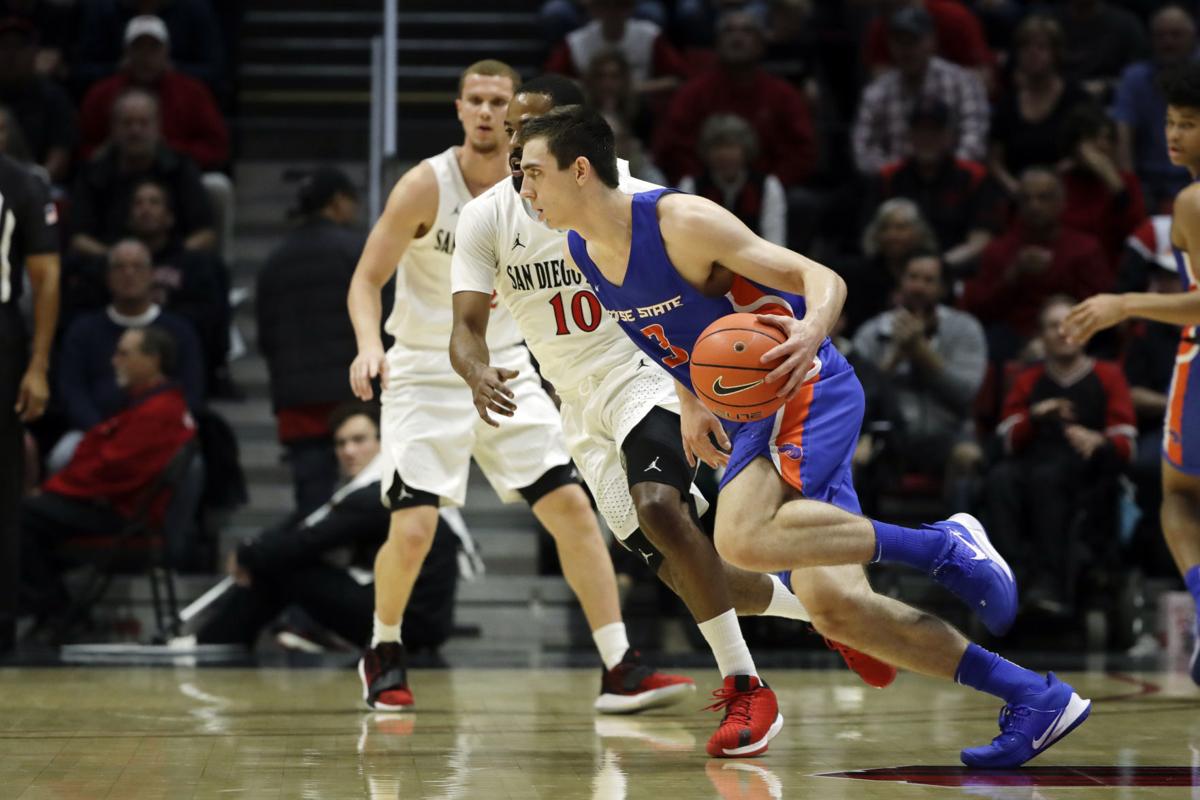 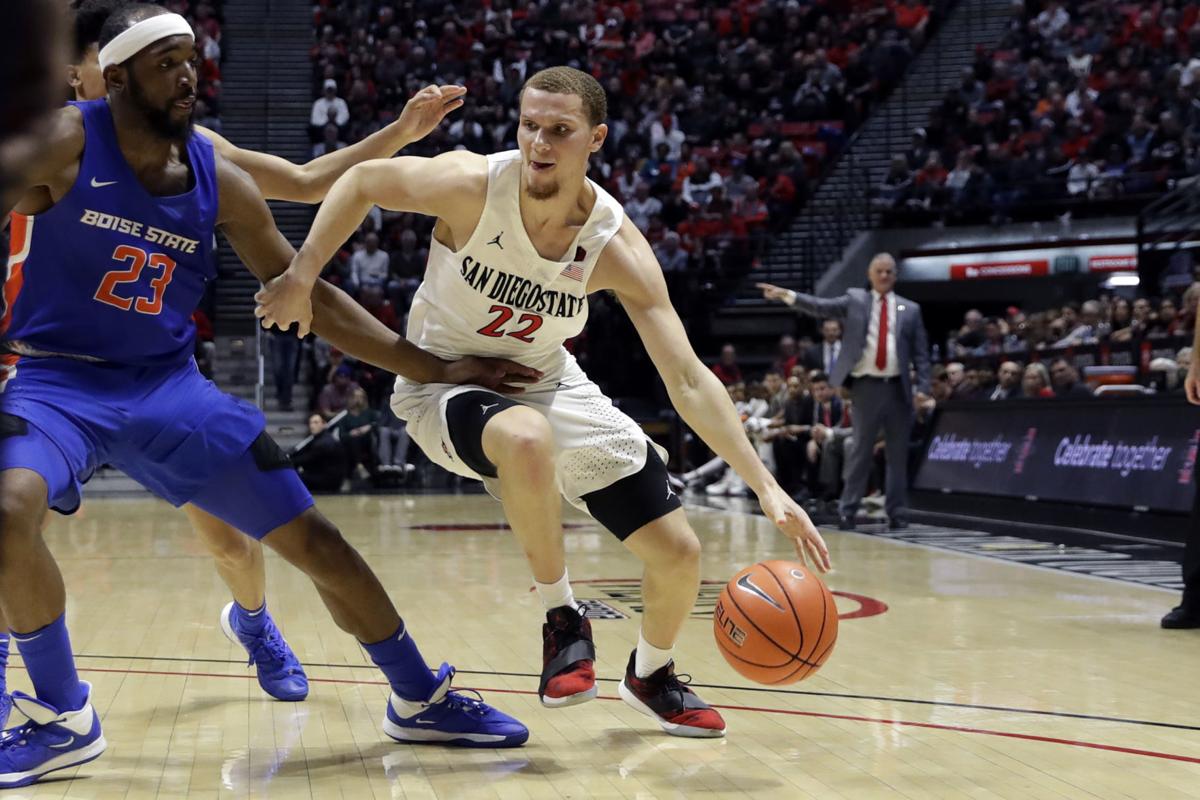 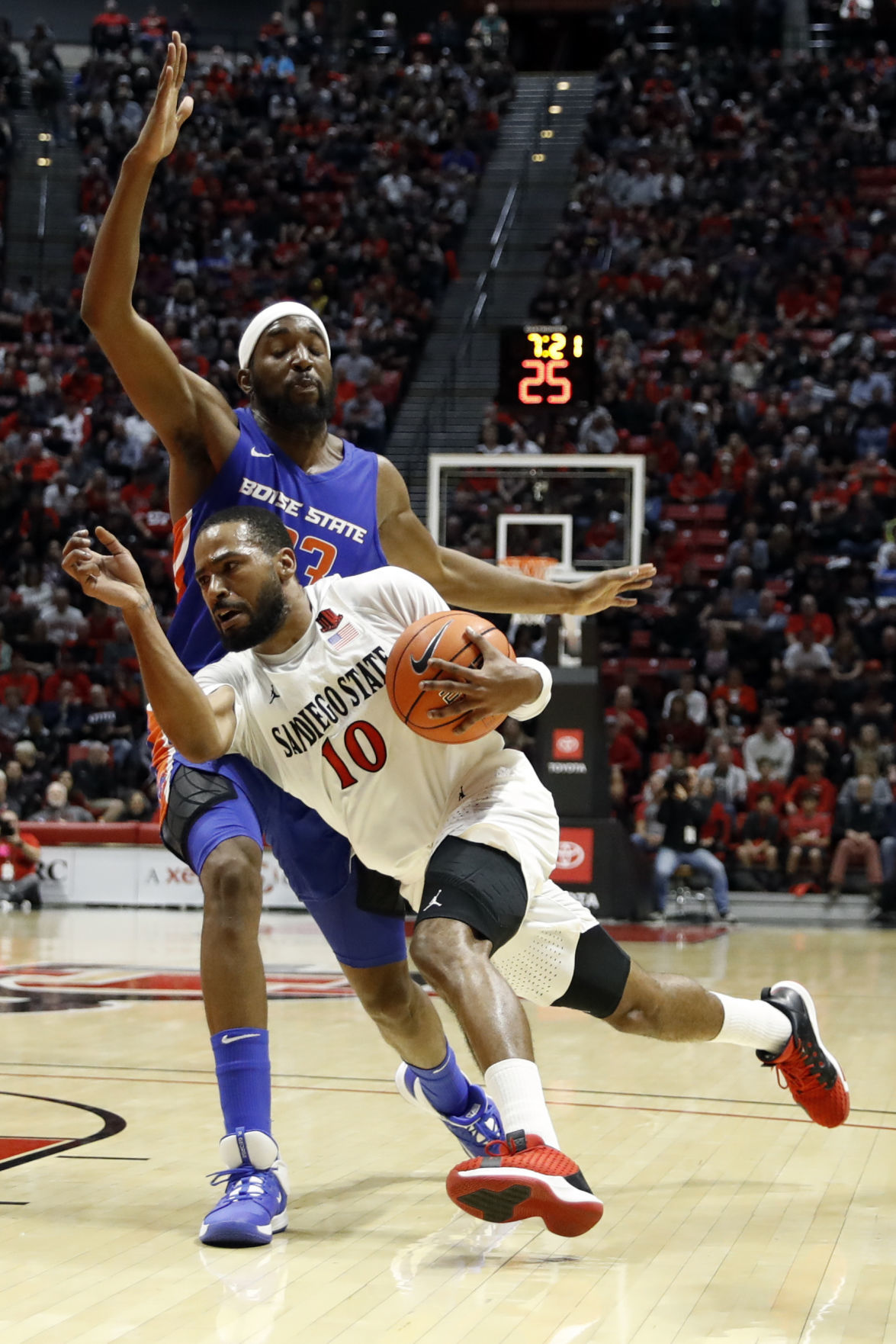 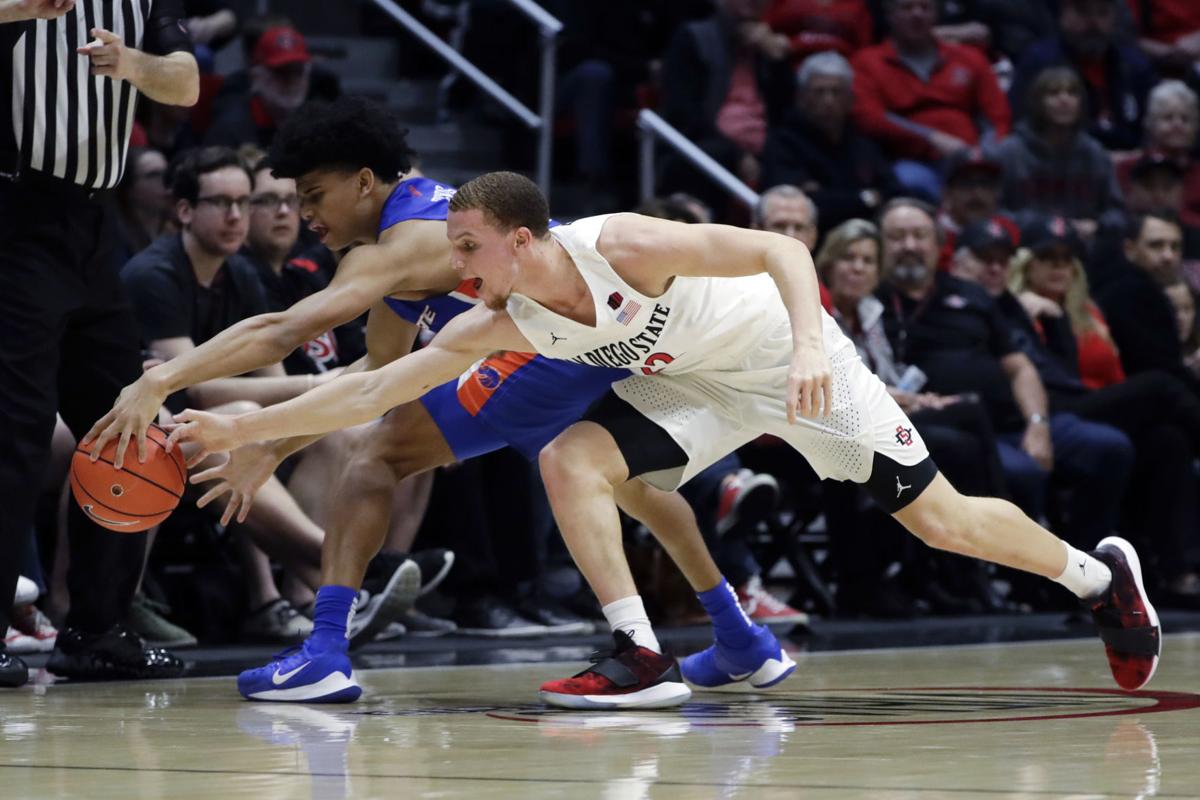 It didn’t help that Boise State had trouble taking care of the ball and hitting shots.

The Broncos tied a season-high with 18 turnovers and struggled to hit from the outside in a disappointing 83-65 road loss to the Aztecs in front of a sellout crowd of 12,414.

San Diego State started out red hot from the field and never cooled, shooting 52.5 percent for the game including 9 for 19 from 3-point range.

RJ Williams led the Broncos with 16 points, while freshman RayJ Dennis had a career-high 10. The Broncos made just 6 of 20 from 3-point range (30 percent), but three came on a late flurry after they were 3 for 15 with a few minutes left.

The Aztecs looked every bit like the team ranked No. 7 in the Associated Press poll and No. 3 in the NET rankings. They fed off a loud and energetic crowd and built an early lead and never looked back, improving to 17-0 on the season and 6-0 in Mountain West play.

“Give credit to San Diego State. They are undefeated for a reason,” Rice said. “They’ve done this to some good teams. They blasted Utah and Iowa, Creighton and on and on. We knew they were good and you have to play an A-plus game on the road in the Mountain West, we know that, but against a team like this that’s feeling it and seeing a big hoop right now, it makes for tough sledding.”

San Diego State is one of just two undefeated teams left in the country and was favored by 11 points entering the game, so a loss wasn’t all that surprising.

But how it came — an early deficit, sloppy turnovers and cold shooting — made things even worse.

The Broncos got just 11 points from the starting five in the first half and trailed 48-25 at the break. The 23-point deficit was the largest at halftime in the 10 seasons under Rice.

For the second straight road game the Broncos fell victim to a career-night from an opposing shooter. San Diego State’s KJ Feagin had only scored in double figures four times all season and only made more than one 3-pointer four times, but hit 5 of 6 from 3-point range and had 19 points in the first 23 minutes of the game.

How unlikely was Feagin’s hot shooting? In his last five games the grad transfer from Santa Clara scored zero, seven, seven, six and seven points. Before the second media timeout he already had nine points on three 3s. Feagin finished with a season-high 23 points.

The Aztecs also got 20 points from Yanni Wetzell and 19 points from Washington State transfer Malachi Flynn.

As time dwindled on the clock students chanted “we want Auburn” in reference to the only other undefeated team in college basketball.

Boise State’s best players weren’t their best players on Saturday, which makes it nearly impossible for them to win — let along keep the game competitive. Derrick Alston had just nine points and Justinian Jessup had seven. The two entered averaging nearly 36 points per game.

“You’re two guys that usually score a lot can’t go 6 for 21,” Rice said. “You need a few more of those to go down. Justinian made his first one and then goes 0 for 7 from there. It’s always hard to get open looks against them. They are good defensively.”

San Diego State scored the first eight points of the game and got the crowd into it early. A Jessup 3 finally got the Broncos on the board, but Feagin’s second triple in the opening minutes gave the Aztecs a 13-5 lead with 16:20 left.

The Broncos trailed 17-7 when Alex Hobbs beat the shot clock with a long 2-pointer. But two more 3s from Feagin and Flynn upped the San Diego State advantage to 23-9 with 12:45 to go.

The Aztecs made 5 of 7 from 3-point range to start the game and led 27-15 before back-to-back buckets from RJ Williams, including a one-handed slam, pulled the Broncos within eight at 27-19 with 7:55 to play.

But San Diego State scored 16 of the next 18 points, including a 3-pointer from Jordan Schakel and another 3 from Flynn, to blow the game open and lead 45-21 with 2:15 left until the half.

The Broncos started just 1 for 9 from 3-point range, while the Aztecs hit 7 of their first 11 shots from deep in the first half to widen the lead.

San Diego State made it 8 for 12 from behind the arc when Feagin hit another 3, this time from beyond NBA range as the shot clock was about to expire, to up the margin to 48-25 just before the half.

Stunningly a last-second 3-pointer from Schakel at the buzzer rimmed out, and the Broncos took a 48-25 deficit into the locker room at the half.

San Diego State only scored nine points in the first eight minutes of the second half, but the Broncos only had 12 themselves.

“It’s a tough loss,” said Williams, who had a strong game in front of family and friends that made the short drive from his home in Los Angeles. “It was hard. They have a home-court advantage and we needed to play a little harder. It was some guys first time playing here so we just have to learn from it and get better from it.”

Boise State will stay on the road in San Diego before traveling to Colorado Springs for a Wednesday night game at Air Force. Tipoff is 7 p.m. and the game will be televised on the AT&T Sports Network.