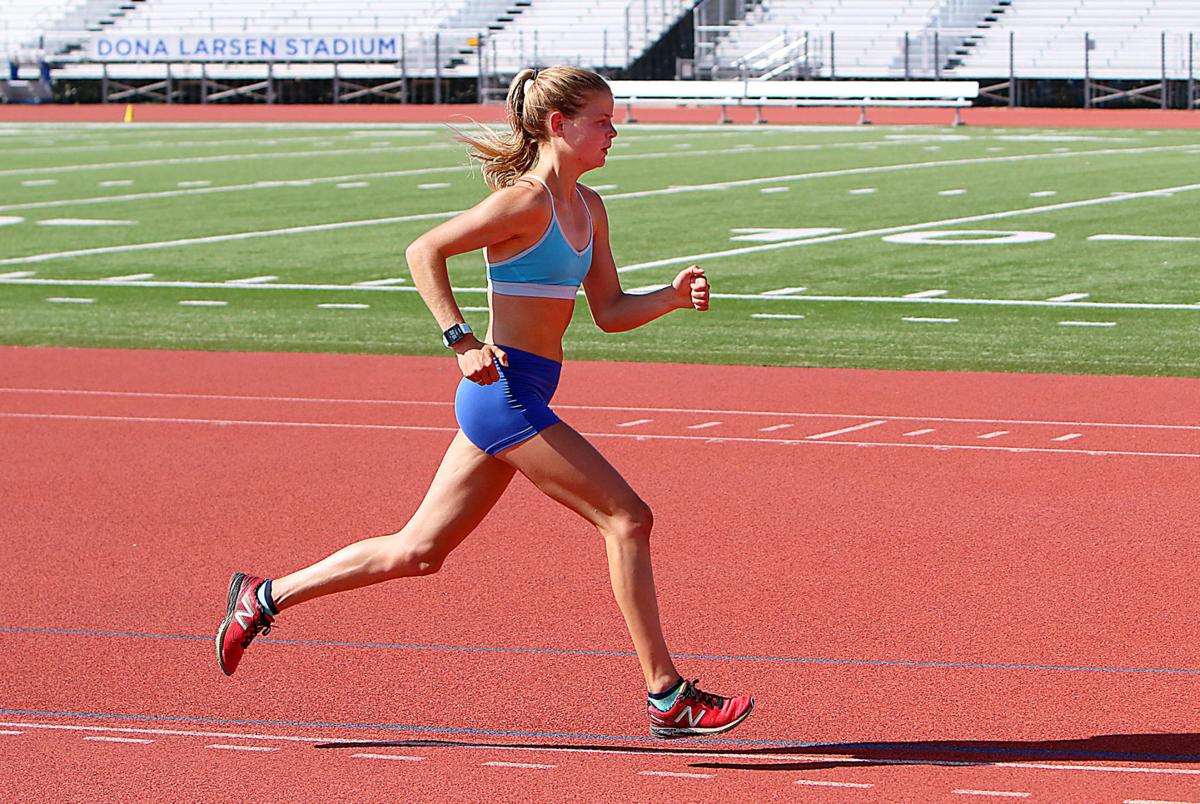 Allie Ostrander runs along the track of Dona Larsen Park in Boise on June 4. 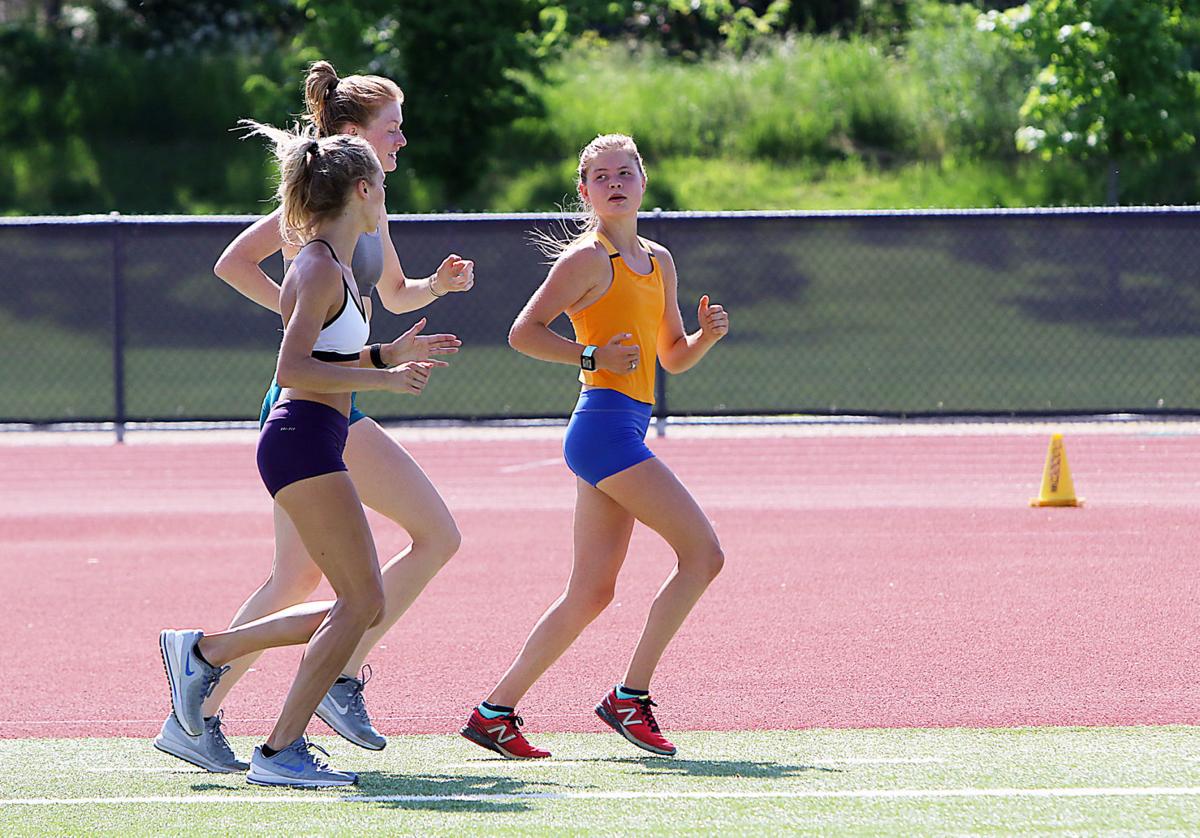 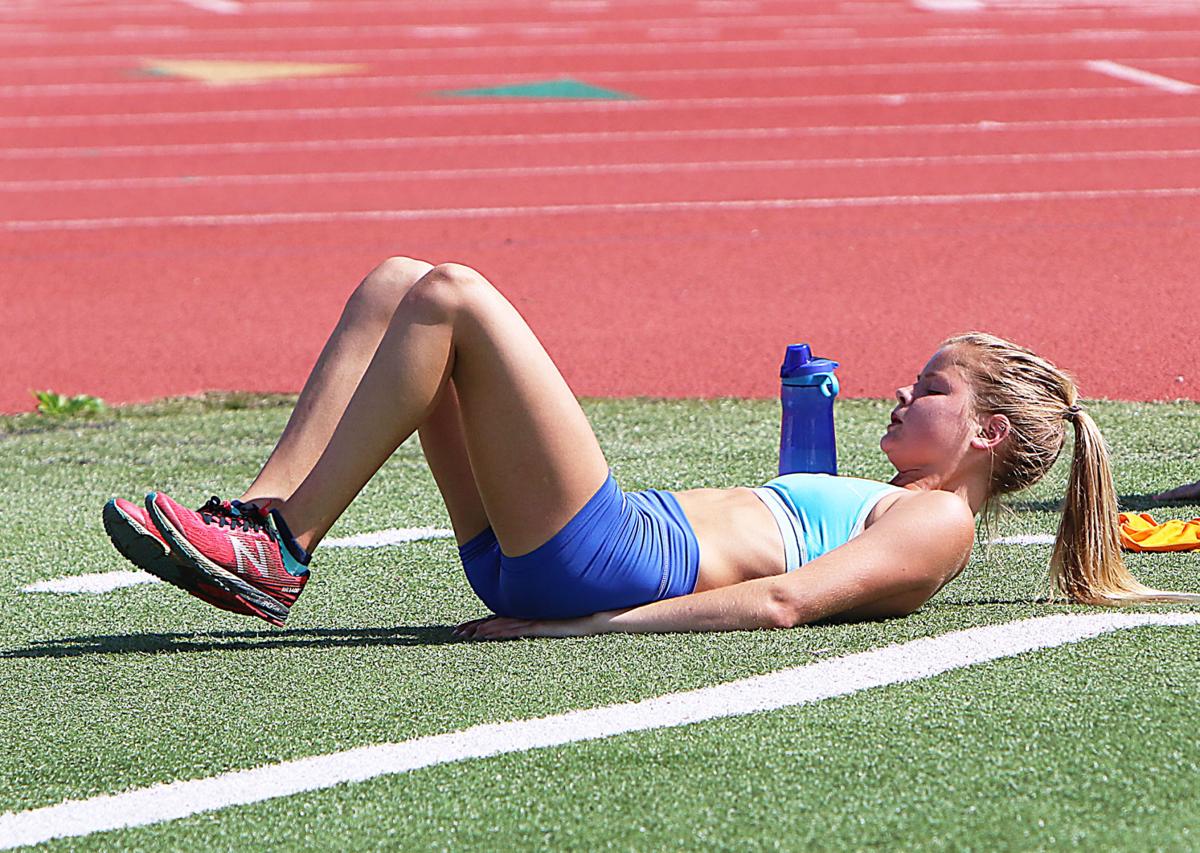 Allie Ostrander knocks out a few crunches during practice Monday at Dona Larsen Park in Boise. 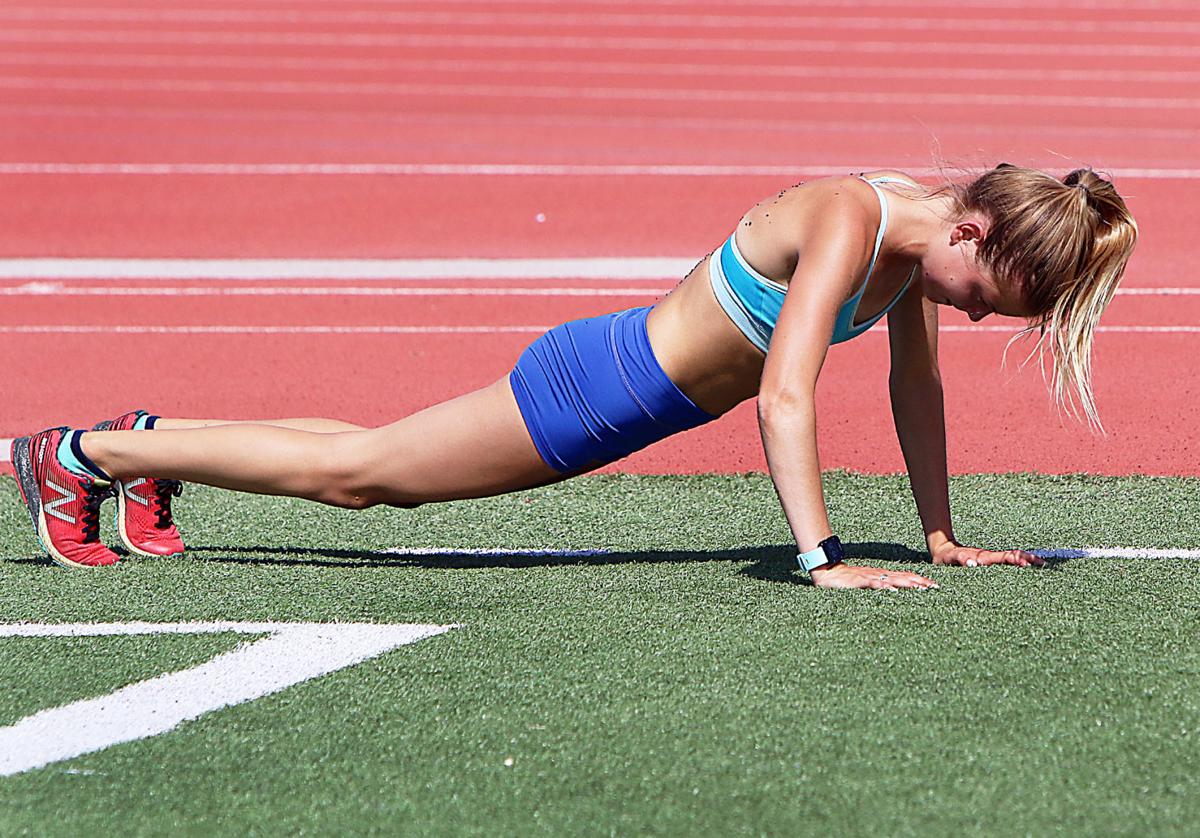 Allie Ostrander does push-ups during practice Monday at Dona Larsen Park in Boise. 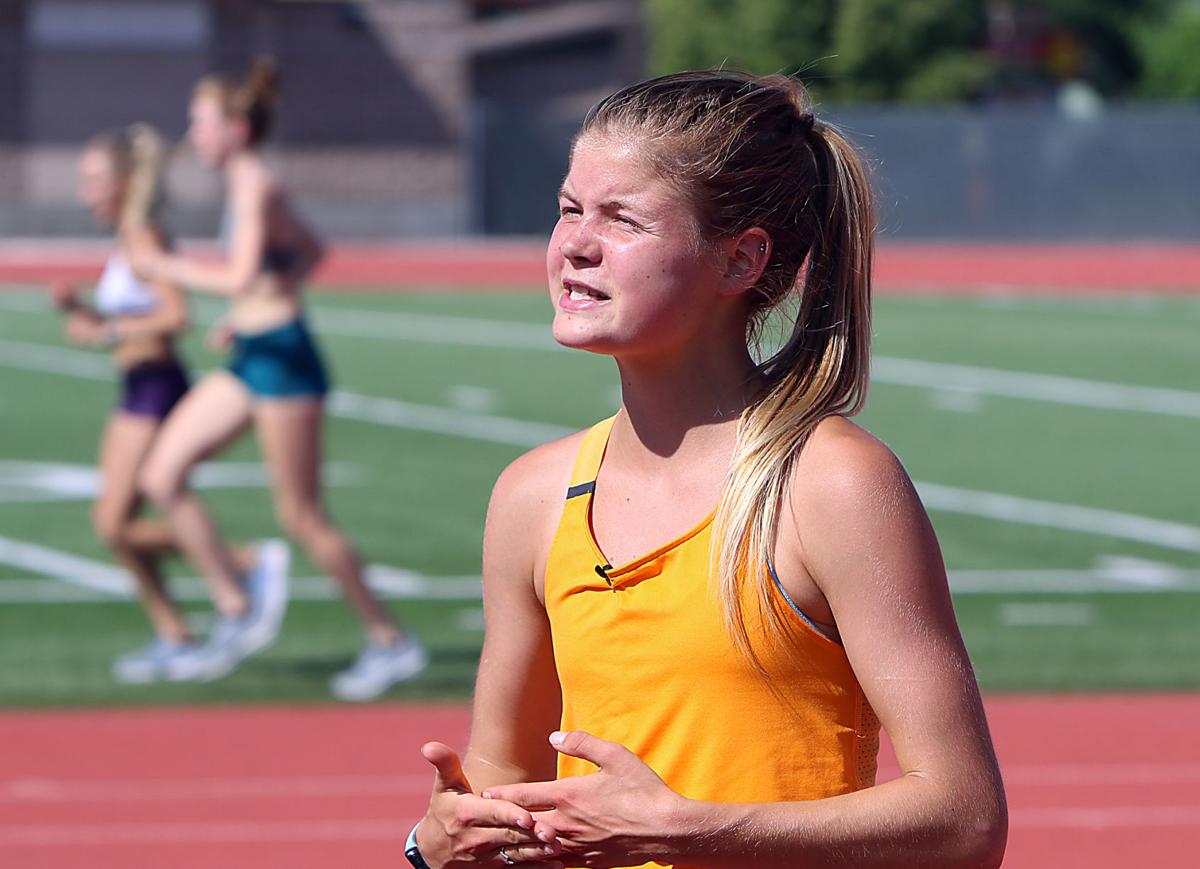 Allie Ostrander does an interview during practice Monday at Dona Larsen Park.

Allie Ostrander runs along the track of Dona Larsen Park in Boise on June 4.

Allie Ostrander knocks out a few crunches during practice Monday at Dona Larsen Park in Boise.

Allie Ostrander does push-ups during practice Monday at Dona Larsen Park in Boise.

Allie Ostrander does an interview during practice Monday at Dona Larsen Park.

Allie Ostrander just earned her undergraduate degree from Boise State’s Department of Kinesiology, so she’s well versed in what to expect in the heat and humidity of Austin, Texas, on Saturday as she runs in both the 3,000-meter steeplechase and the 5,000 finals at the NCAA Championship meet.

“I just graduated with a degree in exercise science, so I can tell you that thermoregulation is tough with high humidity,” said Ostrander. “But conditions are the same for everyone, so that’s what I keep telling myself. It’s going to be tough, but running is tough either way, so everyone’s dealing with it.”

Not everyone will be trying to make history, though.

The Kenai, Alaska native will look to become the first Boise State track and field athlete to win three national titles this week, as the redshirt junior looks to defend her title from the past two seasons in the steeplechase. She opens with the preliminaries on Thursday, and assuming all goes well will compete in Saturday’s final. Roughly 80 minutes after that steeplechase final ends, she will be back on the track to run the 5,000.

And if running in two highly competitive races in less than an hour and a half wasn’t tough enough for Ostrander, The Weather Channel’s forecast for Saturday in Austin calls for a high of 97 degrees and 60 percent humidity.

“Physically its pretty exhausting to have two all out efforts in such a short time frame,” said Ostrander. “But more than that mentally it’s tough to convince yourself to go back out on the track and push yourself to go that far again.”

Ostrander has been pushing herself her entire career. So much so, that she has found success in all sorts of different race lengths. In addition to her Mountain West titles in both events she is running at in nationals, Ostrander took a second-place finish in the 1,500 finals this season. She also ran the 10,000 at the Stanford Invitational earlier this year, where her time of 32 minutes, 6.71 seconds was the best time by any runner in the nation at the NCAA Division I level. The time still stands.

“She’s probably top 10 in the 1,500, the steeplechase, the 5,000 and the 10,000,” said Boise State coach Corey Ihmels. “You could argue that nobody has ever done that collegiately. She’s on the upper-echelon of track athlete and the fact that’s she’s here at Boise State and has represented us the last four years is awesome for us as an institution and program.”

Ostrander could have had her pick of races to run and compete for national titles in this season, and Ihmels would not have limited her. Her lists of accomplishments on the Boise State Athletics website lists 39 honors, spanning indoor and outdoor track and field and cross country. It even includes an eighth-place finish in the 5,000 at the 2016 U.S. Track and Field Olympic team trials.

“Her range is indicative of how athletic she is,” said Ihmels. “You add in that athletic ability, her competitiveness and she’s got a great aerobic capacity, as well. So you add that all together and it makes for somebody who has really good range.”

But at the end of the day, Ostrander decided which events she enjoys doing and where she thinks she can maximize her success.

“The past few seasons, it’s just made sense to do the steeplechase and 5k,” she said. “I enjoy all of the events and each time I race one it’s a little bit different. So you never know exactly what to expect. But I enjoy the steeple and 5k, so I’m excited to race that.”

As many honors as Ostrander has picked up for the Broncos, she’s not done yet. She still has a year of eligibility left after this year, and has applied for the Master of Athletic Leadership program at Boise State for next year. She’ll also have her eye on the 2020 Olympic Games in Tokyo and the U.S. team trials next June.

“That’s going to take precedence over everything we do here at Boise State,” Ihmels said about the Olympics. “When we recruited her, we were going to do what’s best for her. I think that’s going to be a conversation we have as we get through this year and into next year. I think that fits up well for her to be in the same environment for another year, and give it a go and make an Olympic team. I think she’s just continuing to get better.”

Boise State will have two other athletes running in the NCAA Championship. Senior Alexis Fuller will be running in the 1,500 preliminaries today while sophomore Kristie Schoffield will run in the 800 preliminaries. If either runner advances, they will race in the finals of those events on Saturday.