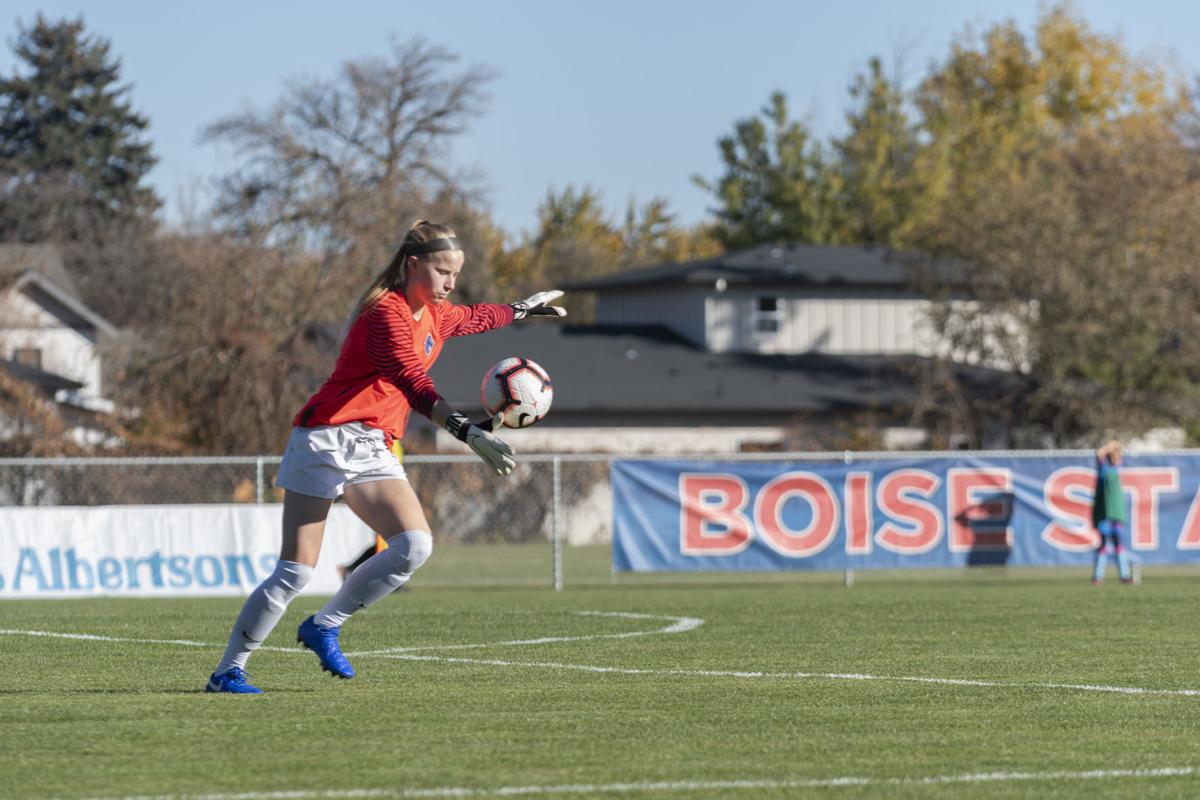 Boise State goalkeeper Sydney Smith kicks the ball out after making a save against Colorado College on Oct. 25 at Boas Soccer Complex. 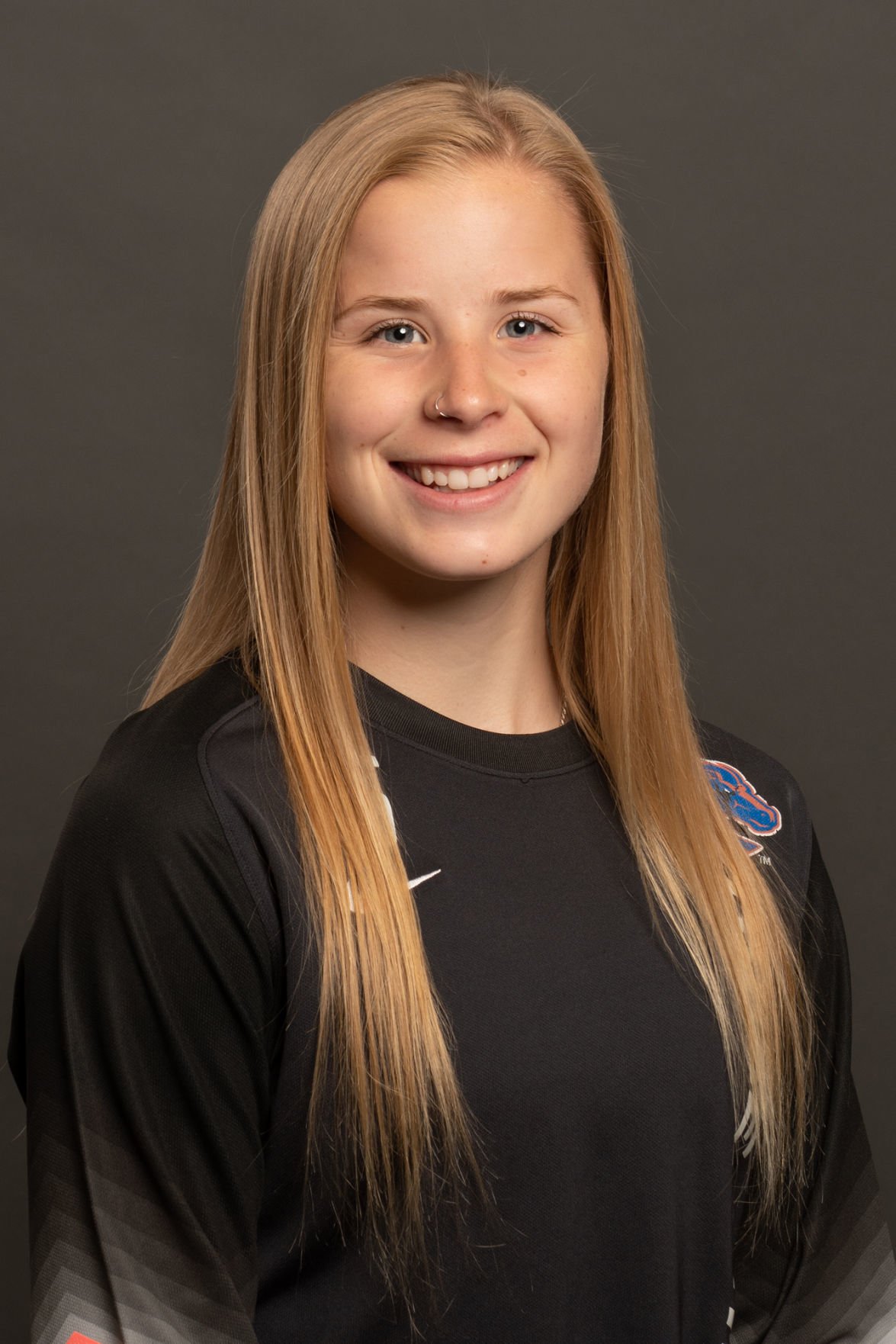 Boise State goalkeeper Sydney Smith kicks the ball out after making a save against Colorado College on Oct. 25 at Boas Soccer Complex.

BOISE — Sydney Smith admits that growing up she didn’t see herself playing for the Boise State women’s soccer team.

She wanted to get far away from Caldwell.

But it was during her junior year at Caldwell High that the goalkeeper realized the support of her family was important to her. Relationships she had formed with Broncos coaches through her club program, FC Nova, also helped pull her closer to Boise State.

Now she’s having a record-breaking year for the Broncos.

The sophomore goalkeeper has played a huge role in helping Boise State capture its second straight Mountain West regular season crown this year. With two more wins, she can get the Broncos to the NCAA Tournament for the first time in 10 years. Boise State (16-4-0) opens the Mountain West Tournament with a semifinal game against New Mexico at 2 p.m. today at Boas Soccer Complex.

“I witnessed (the Mountain West Tournament) last year down in San Jose and got to watch the whole time,” said Smith, who is in her first year starting for the Broncos. “But this time being in the action has been really exciting.”

After watching Tara Fisher set a program record with 10 shutouts in her senior season last year, Smith one-upped her with 11 shutouts this season and a school-record 16 wins. She also leads the Mountain West with a 0.60 goals-against average, which would be a program record if that number stands. Her 0.855 save percentage would be the second-best percentage in program history.

For a team that features headline-grabbing forward Raimee Sherle and her school-record 57 career goals, Smith and the Broncos’ defense have proven that Boise State is more than just a high-powered offense.

“I think she’s really had to do something historical to open people’s eyes to it,” said Boise State coach Jim Thomas. “There are so many great players and good parts to this team, but to break the all-time record for shutouts in a season her first year was something that I think raised a lot of eyebrows. This is the best defensive group that Boise State has ever had. We’ve given up fewer goals in 20 games than any other Bronco team in the past. The whole back line is starting to get people to look in their direction, and Sydney is a big part of that.”

Smith has started all 20 games, allowing just 12 goals on 83 shots on net. She hasn’t allowed more than two goals in a game this season and of the Broncos’ four losses, three of them were by a 1-0 margin.

Smith will point to the defenders as the source to her success. In a 1-0 win against San Jose State, she only needed to make one save. In shutout wins against Portland State and Southern Utah, she faced two shots.

“I can not take the credit for most of these,” said Smith. “They let probably four shots a game, it’s ridiculous. So I only have to deal with a few things, which makes it super easy. It’s been pretty nice to have low, low shots. We’ve had 30 shots to four shots in games. So it’s really nice with my back line helping me out there.”

But her coach says Smith is underselling her contributions to the team. When the Broncos need her to make a save, he said, they can count on her to do just that. Often times with style.

“She has unbelievable hands, hands from another sport,” said Thomas. “She’s like a wide receiver. The ball can stick in her hands, one-handed, two-handed, across her body, I’ve never seen anything like it. It’s almost like a running joke, you just throw stuff at her and see if she can catch it. And then she’s a tremendous athlete. She’s a genuine, legit, elite athlete with a great vertical and a great side-to-side ability. You pair those two things and put it in that position, I think you’ve got a tremendous prospect.”

Perhaps there’s no better example of Smith’s athletic ability than the fact she’s been able to excel in different positions. While she played in net through her entire club career, during her junior year at Caldwell High she was a first team All-4A Southern Idaho Conference midfielder.

“I love scoring goals, so I loved it,” Smith said about her time as a midfielder. “I loved being the center of attention on my high school team. I was always a goalkeeper on club and we had a solid goalkeeper in high school and that was her thing. She was a senior, so I had to play on the field. I was a fluid kid, so I could do both.”

Her senior season, she was a first team all-conference goalkeeper for the Cougars.

Thomas says it’s not uncommon for the Broncos to recruit goalkeepers who have that type of versatility. In fact, he says, two of the Broncos’ other three goalkeepers — freshman Lauren Bennett and junior Lily Finch — both played in the field at least part time during the time they were being recruited by the Broncos.

Having that ability to do both, he said, helps them better understand what is happening on the field.

“That’s why we always look for goalkeepers that have a lot of experience on the field,” Thomas said. “While we’re not going to play her up front in a game, it’s certainly fun to see them in training jump out there and pop a few. They’ve got some ability, for sure.”

The Broncos are hoping Smith’s knowledge of the field can help them reach the NCAA Tournament for the second time in program history. Boise State qualified after winning the Western Athletic Conference Tournament in 2009, falling to UCLA 7-1 in the first round.

The Broncos had hopes of making the tournament last year after winning the regular season conference title, but fell to San Jose State in penalty kicks in the semifinals. However, earning the Mountain West’s No. 1 seed last year gave the Broncos the right to host the tournament this season, something they hope they can capitalize on.

Being the top seed again this year means the 2020 tournament will come back to Boise, as well.

“It’s really nice to have that atmosphere, because a lot of the girls are local,” Smith said. “It will be really good for them to have their families here to support them.”