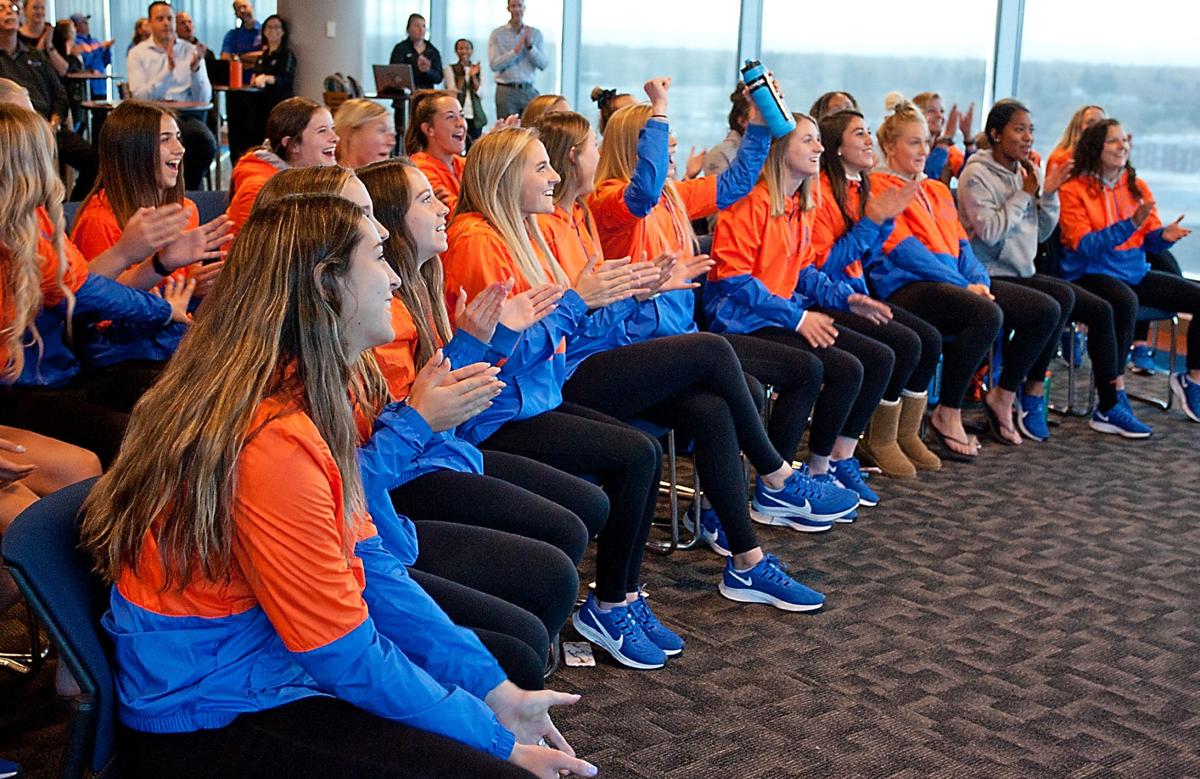 Members of the Boise State women’s soccer team react as they hear their team announced during the NCAA Selection Show watch party at the Stuekle Sky Center at Albertsons Stadium, Monday, Nov. 11, 2019. 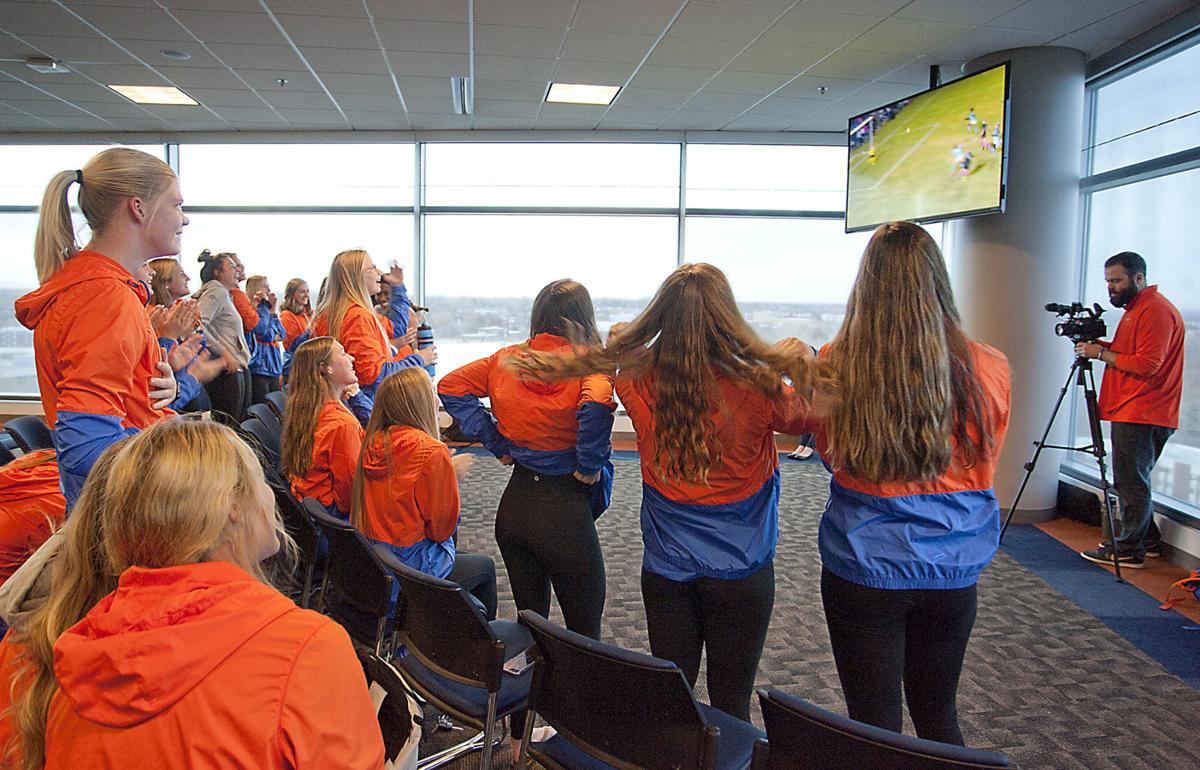 The Broncos stand up and cheer after seeing their name pop up on the screen during the NCAA Selection Show watch party at the Stuekle Sky Center at Albertsons Stadium, Monday, Nov. 11, 2019. 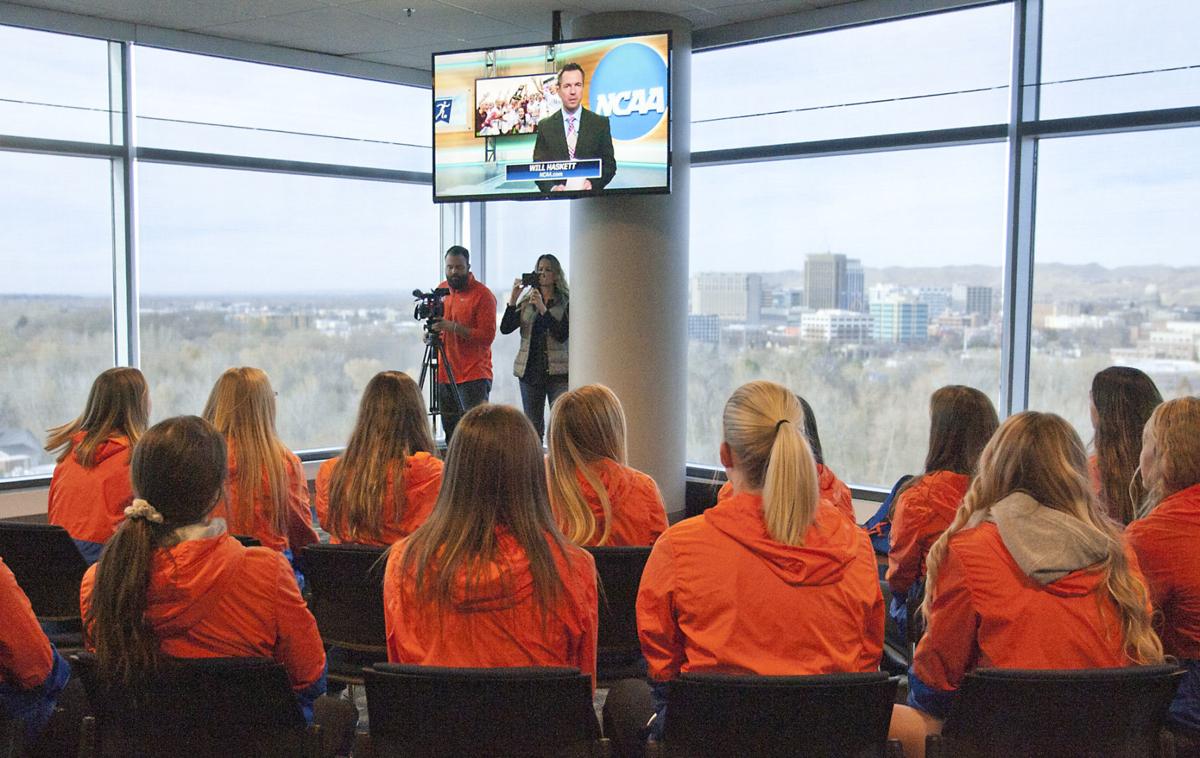 Members of the Boise State women’s soccer team react as they hear their team announced during the NCAA Selection Show watch party at the Stuekle Sky Center at Albertsons Stadium, Monday, Nov. 11, 2019.

The Broncos stand up and cheer after seeing their name pop up on the screen during the NCAA Selection Show watch party at the Stuekle Sky Center at Albertsons Stadium, Monday, Nov. 11, 2019.

BOISE — How badly did the Boise State women’s soccer team want to play BYU in the first round of the NCAA Tournament? The Broncos cheered louder when the Cougars were announced as the opponent than when they saw themselves pop up on the screen.

“That tells you how they feel about the game,” coach Jim Thomas said.

Boise State’s players, coaches and athletic department personnel gathered in the sixth floor of the Steukle Sky Center Monday afternoon to watch the NCAA Tournament Selection Show. The Broncos knew they would be included after securing the automatic bid by winning the Mountain West Tournament on Saturday. The pressing question was where were they going and who would they play.

The answer came fairly early in the show. Those in the room clapped as the Broncos were shown on the screen. When it was revealed that unbeaten BYU, the No. 4 team in the country, would be their opponent? The players went nuts.

“We’re super excited about it,” junior Aubree Chatterton said. “I know they have a great record, I know they are undefeated. … I think it’s going to be a great game and I think we can totally do it. Who cares about their record, who cares about our record. One more game, and I just think we’re going to put up a great fight. I’m super excited to play them.

BYU went 18-0-1 and was ranked No. 4 nationally in the most recent United Soccer Coaches Top 25 poll. The only game they played this season that didn’t result in a win was a 2-2 tie with No. 20 Santa Clara.

“They are one of the best teams in the country and I feel like we are too,” Thomas said. “We are definitely excited for the opportunity.”

The Broncos will play at BYU at 6 p.m. on Friday.

“There will be 5,000 BYU fans there,” Thomas said. “It’s going to be an experience unlike any other. It’s an amazing environment and I’m excited for our players to get to experience that and get to rub shoulders with one of the best teams in the country.

“I think the most exciting thing about it is it’s two teams that are really, really attacking minded. It’s going to be a wonderful game, really open and free flowing. I know our players will be excited about that.”

It’s already been a historic season for the Broncos, and one that nobody will forget anytime soon. Getting a chance to knock off one of the best teams in the country is icing on the cake.

“It’s such a huge accomplishment and I know we’re all so excited,” Chatterton said. “I’ve never been part of something like this in my life, so it’s just so awesome and I’m so happy to go through it with these girls. It’s the best team and best season I’ve ever been part of. It’s so awesome.

“We’re coming off two great games so I’m so excited to see what we do on Friday night.”