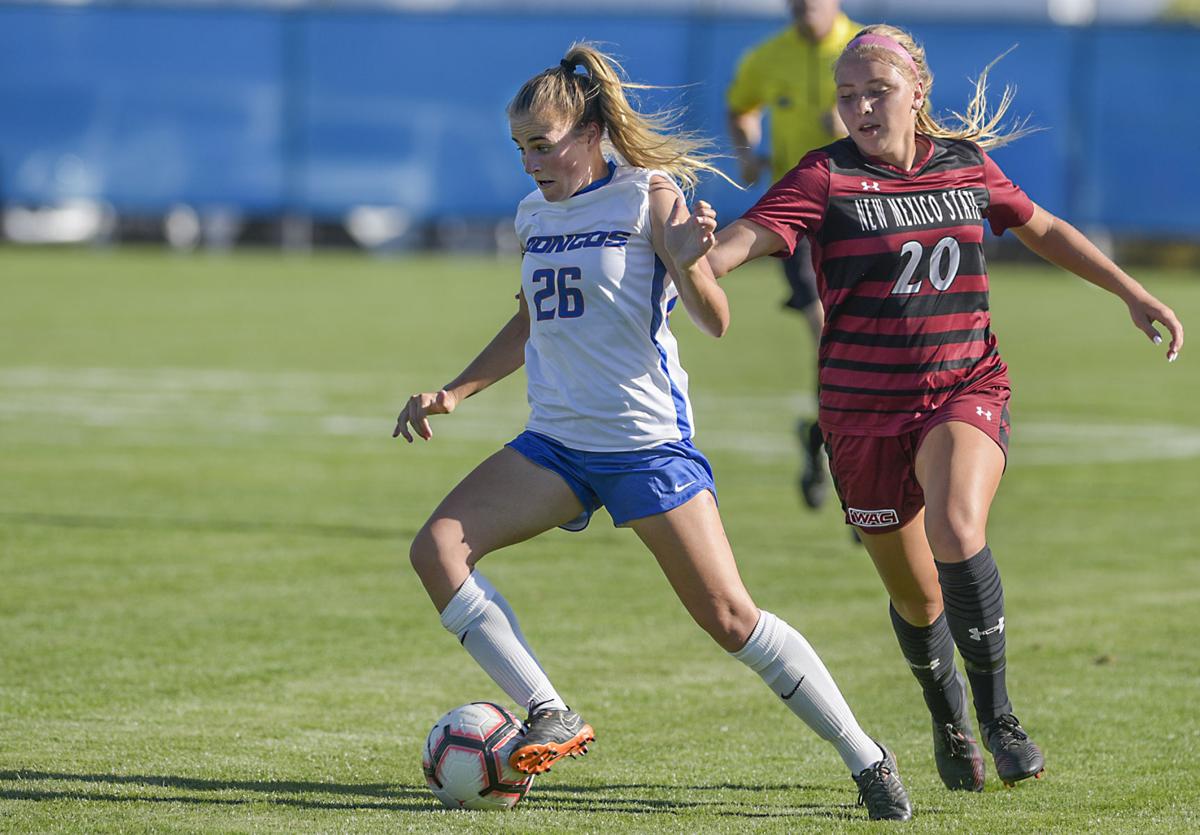 Boise State soccer player Raimee Sherle moves the ball down the field during a game against New Mexico State on Friday at Boas Soccer Complex in Boise. 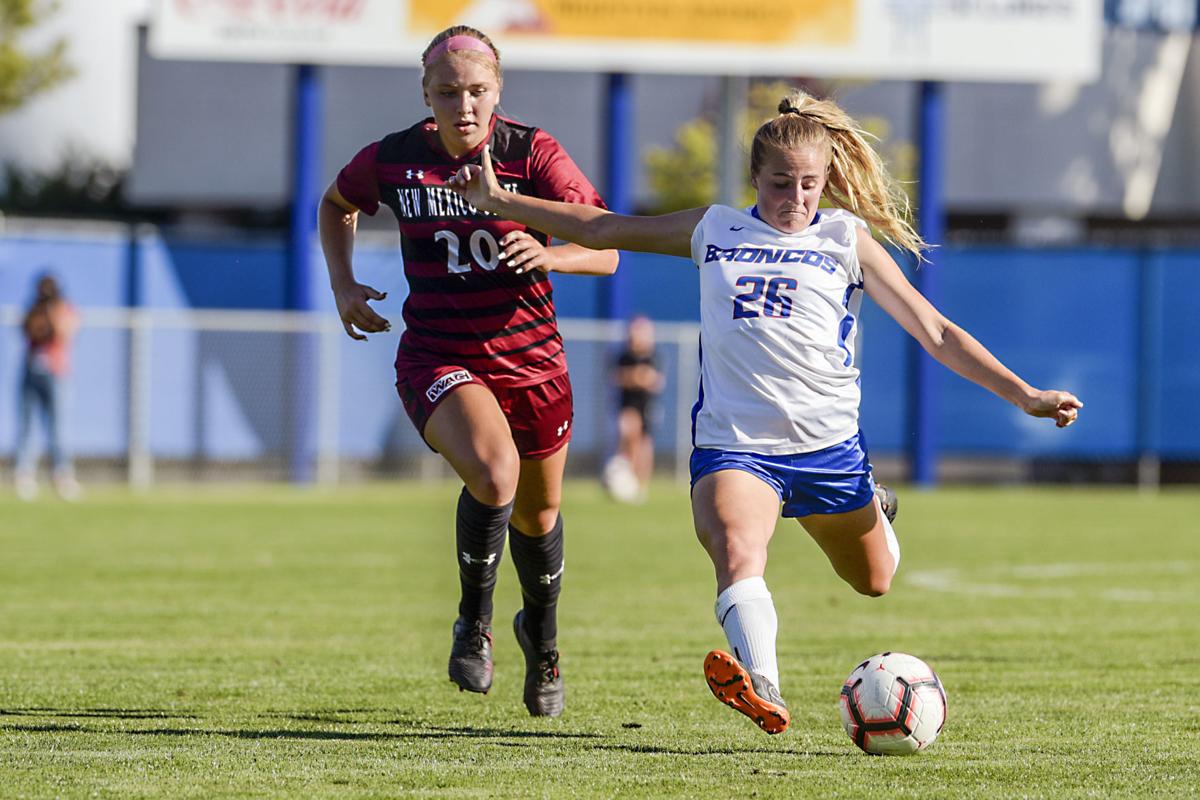 Boise State's Raimee Sherle prepares to kick the ball during a game against New Mexico State on Friday at Boas Soccer Complex. 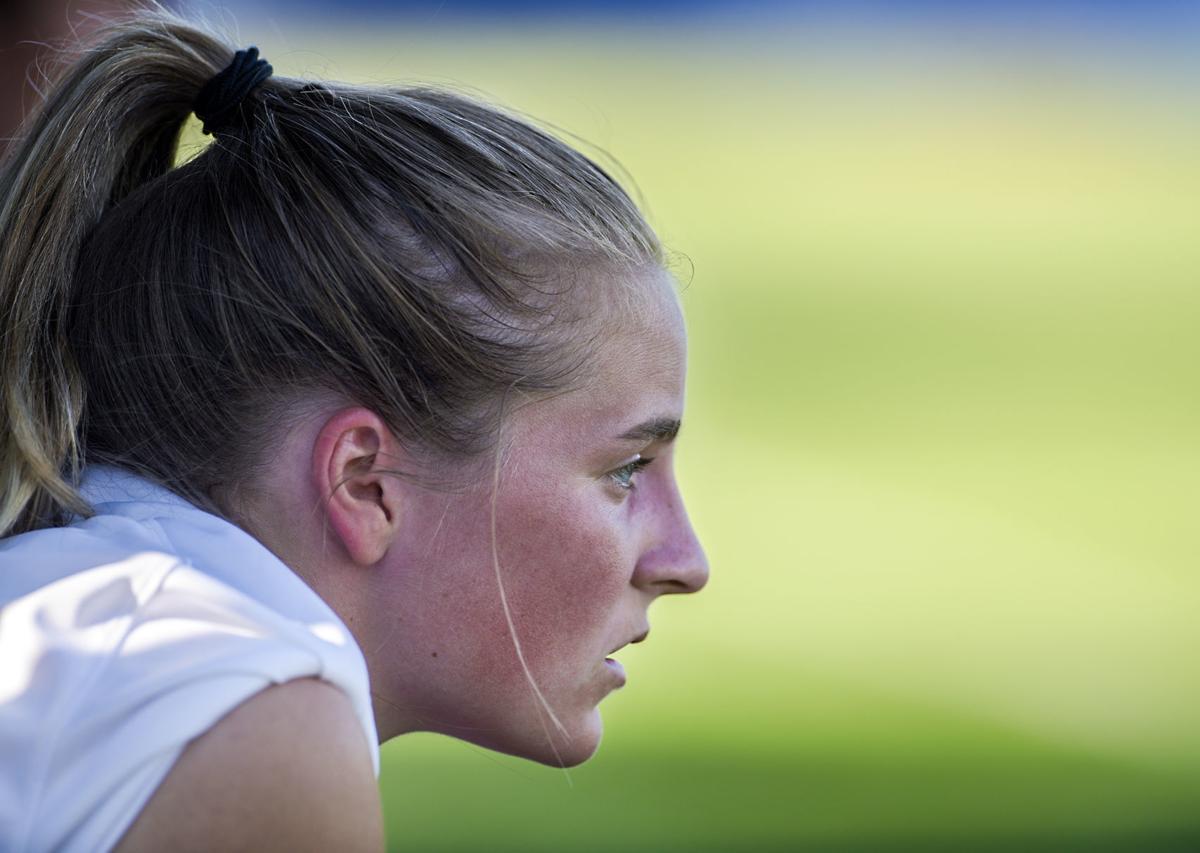 Boise State's Raimee Sherle takes a break during the Broncos' game against New Mexico State of Friday at Boas Soccer Complex in Boise.

Boise State soccer player Raimee Sherle moves the ball down the field during a game against New Mexico State on Friday at Boas Soccer Complex in Boise.

Boise State's Raimee Sherle prepares to kick the ball during a game against New Mexico State on Friday at Boas Soccer Complex.

Boise State's Raimee Sherle takes a break during the Broncos' game against New Mexico State of Friday at Boas Soccer Complex in Boise.

BOISE — In terms of individual accolades, Raimee Sherle has almost got it all.

The Boise State senior soccer player has earned Mountain West Offensive Player of the Year honors in each of the last two seasons, holds both the school and conference record for goals and scoring and tied for the lead in the nation for goals a year ago.

About the only thing Sherle hasn’t personally accomplished that she wants to? Score on a header.

She may have a little work to do on that one, though.

“I refuse to head the ball, but I’m going to conquer my fear and get a header goal,” Sherle said. “It’s going to happen.”

While her personal goals may be limited to overcoming a fear, the list of goals Sherle has for her team is much longer and much loftier. She’d like to see her team surpass the 13 wins they had in each of the past two seasons, which would set a school record. She’d like to see the Broncos win an outright conference regular- season title, something never done in program history. Boise State shared the Mountain West regular season title with Wyoming and New Mexico last season.

Finally, Sherle wants to help lead the Broncos to the NCAA Tournament, something Boise State has only done once before, in 2009.

“It’s still kind of early, but from what I’ve seen through this summer and in our preseason, we’re pretty close,” said Sherle. “We’ve got all of our attacking girls back, which is good. We’re a pretty tight knit group there. And the defense as well, they’re learning their roles and their getting with us. We’re building this chemistry and I’m excited to see what we can do with it.”

So far the results have been good for Boise State. The Broncos have started the season 3-0, outscoring opponents 10-2 in wins against Idaho, Eastern Washington and New Mexico State.

The Broncos will travel across the state Friday for a game against Idaho State in Pocatello, then return to the Boas Soccer Complex on Saturday for a home game against Utah.

Of course, it should come as no surprise that Sherle has been in the middle of Boise State’s recent success. The senior has four goals and three assists on the year, continuing a career that has seen her in the center of the Broncos offense ever since she was a freshman.

“Raimee basically built this program to where it is today,” said teammate McKenna Kynett, a senior midfielder. “Everyone knows who Raimee is and it will be important to remember her work ethic and the way she plays. People are going to follow that and keep building on that.”

The Rocky Mountain High graduate now has 49 goals and 11 assists in her career, good for 109 points. Last season Sherle scored 20 goals, tied with South Florida’s Evelyne Viens for the most in the nation.

But as many goals as Sherle scores, her focus has never been on individual glory. Instead, she wants to keep making her team as good as it can be.

“Ironically, one of the statistics that has been lost in all of this is if Raimee was not in the Mountain West, and doing it somewhere else, we actually still have the highest goal scorer in the entire conference in McKenna Kynett,” Boise State coach Jim Thomas said. “We have the leading assist getter in Kristina Serres. We led the league in shutouts last year with Tara Fisher (now graduated). So I think she’s very well aware of how soccer teams win. And by having a player that does get the media attention she does know that ‘it doesn’t matter how many goals I score if these components don’t work,’ as a coach, your job becomes pretty darn easy at that point.”

Sherle and the Broncos got a taste of success last season, as they earned a share of the regular-season title and the No. 1 seed at the Mountain West Tournament.

But they stumbled into the Mountain West Tournament, finishing the regular season 0-2-1 before falling to San Jose State in penalty kicks in their first game of the tournament.

It’s a loss that stuck with the Broncos all offseason and one they hope they can avenge in the 2019 Mountain West Tournament in November. The Broncos will have a bit of a leg up this time around, as they will host the tournament.

And with the talent they have, led by their top goal scorer, the Broncos believe they have a good shot at reaching the goals they set out for.

“I think we deserved to win, I think we were good enough to win,” Sherle said about last year’s team. “This year we need to prove it and finish strong. We had some things happen at the end of last year which were pretty unfortunate. Maybe it affected our game, maybe it didn’t, who knows. But this year we’re out for the title. We want it bad.”