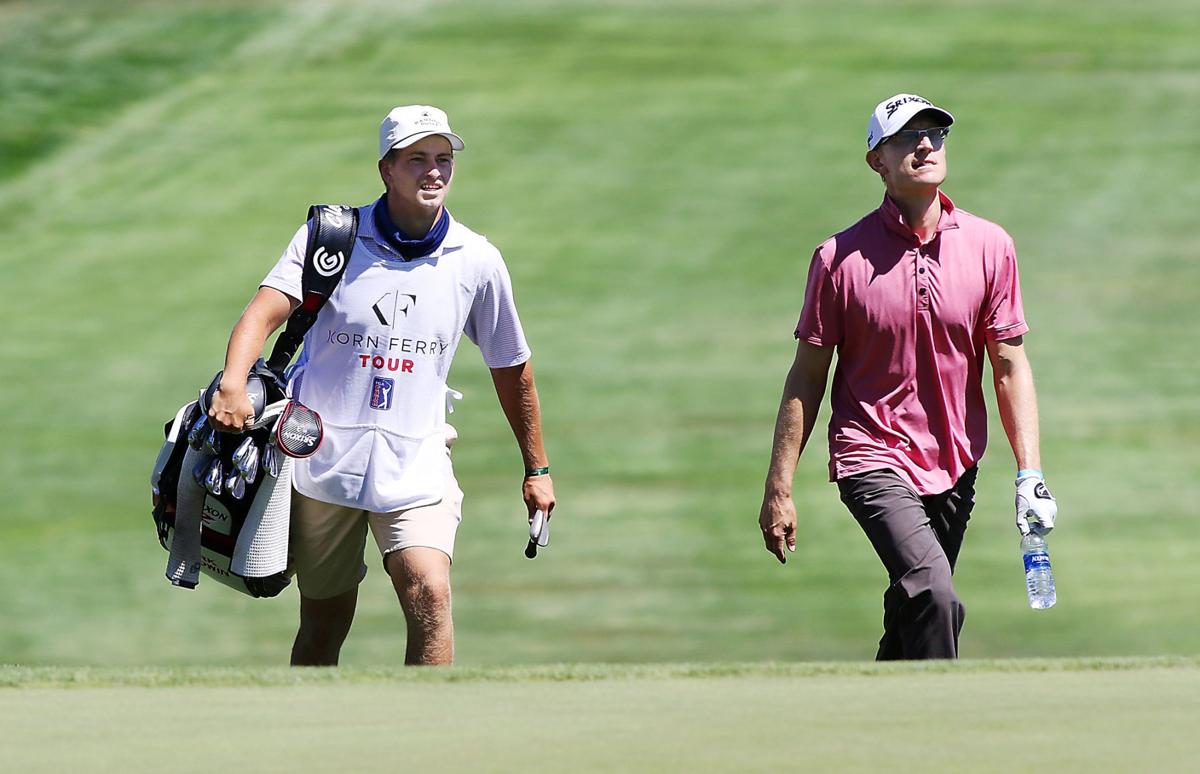 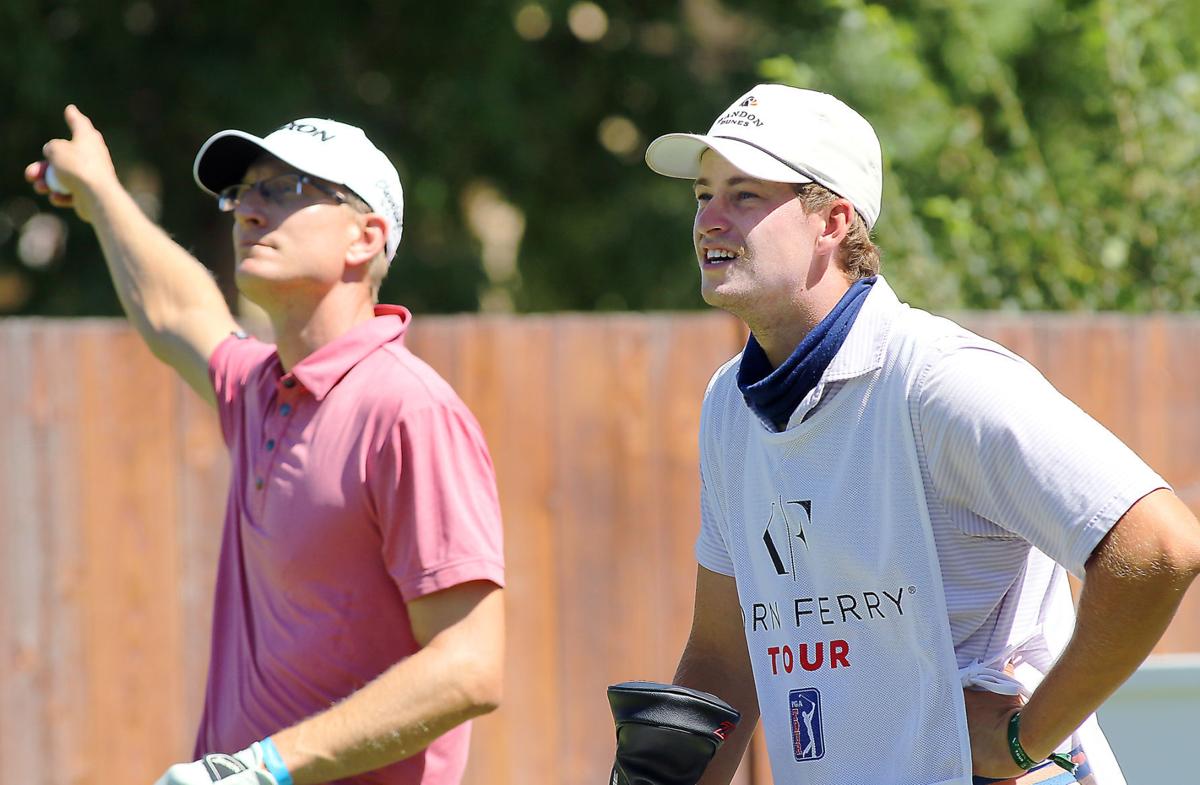 Caddie Connor Johnstone, at right, and PGA tour pro Mark Baldwin follow the drive of another golfer off the 15th tee at Hillcrest Country Club during the Albertsons Boise Open on Friday

Caddie Connor Johnstone, at right, and PGA tour pro Mark Baldwin follow the drive of another golfer off the 15th tee at Hillcrest Country Club during the Albertsons Boise Open on Friday

BOISE — Connor Johnstone missed the first phone call because he was sleeping. The second one woke him up.

It was a representative from the Albertsons Boise Open calling early Thursday morning, asking if he was able to make it to Hillcrest Country Club by 10:30 a.m. to help fill in as a caddie for the opening round of the tournament.

The Boise State senior golfer and Vallivue High School alum hurried to get ready, got to the course and two hours later was serving as the caddie for Ben Kohles in a professional golf tournament. Kohles fired a 3-under 68 with Johnstone carrying his clubs after his regular caddie was sidelined with an inconclusive COVID-19 test.

He got another phone call Friday and was able to fill in as the caddie for Mark Baldwin, who shot a 5-under 66 with him on the bag.

“I wouldn’t say it was bucket list material because being a professional player would be more of a bucket list obviously than being a caddie, but it was a really good experience and a really cool opportunity to be inside the ropes and learn and take in as much information as I could,” Johnstone told the Idaho Press on Friday.

“It’s something I can use as a driving force going forward to help improve myself and motivate me to get there in the future.”

Johnstone said Boise State golf coach Dan Potter asked about two weeks ago for interested and available volunteers on the team to serve as a potential caddie should any of the regular caddies test positive for COVID-19 while in town.

He said yes but didn’t hear anything until the morning of the first round on Thursday. He got screened and cleared by the Korn Ferry Tour and met Kohles ahead of his warmup.

Johnstone caddied once before when he was 15 years old, but he largely was learning on the fly and using his experiences as a player.

“He did everything just like he was supposed to do,” Kohles said. “You’d love to have your normal caddie out there, but once I met Connor I knew it was going to be a perfect fit in terms of him being a good kid and being a golfer, so he knows what he’s doing out there.”

Friday, Johnstone showed up before 7 a.m. expecting to caddie for Kohles again, but found out shortly after he arrived that regular caddie Hilton (JJ) James — who at 79 years old is one of the oldest caddies in professional golf — had been cleared to return.

Johnstone left and drove to Spurwing Country Club to practice, but got a call right when he pulled in asking if he could hurry back to caddie for Baldwin, who lost his caddie due to food poisoning.

Johnstone hit the dreaded traffic on Eagle Road near the freeway and didn’t pull into the parking lot until 20 minutes before Baldwin’s scheduled tee time of 8:58 a.m. He hurried to get cleared, grab his caddie bib and the pin location sheet and threw Baldwin’s clubs over his shoulder and hurried to the first tee.

“I walked up, shook his hand and off we went,” Johnstone said. “It was something I can honestly say with confidence that I’ll never do something like that again, what I experienced today.”

Baldwin struggled on Thursday and shot a 2-over 73, but the caddie change to Johnstone proved to be good luck. He shot a 5-under 66 on Friday, including a 30 on the back nine that included an eagle at No. 15.

“I think his being a local might have helped with a member bounce on the 14th hole when I flared one way, way right almost down the road, and magically it came back and was under a tree and I had a shot,” Baldwin said. “I’m going to give him credit for the bounce there.

“We had a good day. He was great. When you are jumping into a round with someone you have no history with, the golden rule of caddying is keep up and shut up, but I like to talk and we had some nice conversations about his season and going to Boise State. He’s obviously a seasoned player himself and that showed. He knew exactly what to do in terms of being in the right place.”

Johnstone had one simple goal for the two rounds — not screw anything up.

“You try to just stay out of the way as much as you can,” said Johnstone, who was paid $100 by each golfer for his help. “And it’s not only your player, but the other two you are worried about, so I just followed my guy and stood near him the whole time.

“Every player is different and sometimes they don’t trust you like their normal caddie, so I talked with Ben before the round Thursday and said I’ve played Hillcrest probably 100 times if you need anything and he said ‘yeah I’m going to rely on you pretty heavy’ and I was comfortable with him early. I didn’t get a chance to talk with Mark because we were already on the tee when I got there, but we talked walking up the first tee about where I should stand and stuff and they were both really cool and didn’t care too much.”

Johnstone won an Idaho state title as a sophomore at Vallivue in 2014 and has one spring left with the Boise State golf team. He said he tried to soak in as much as possible while getting the rare chance to be up close with professional golfers.

His biggest takeaways came on the mental side.

“Just their composure,” Johnstone said. “This is not the PGA Tour and these guys aren’t living lavish lifestyles. They are driving from tournament to tournament and a lot of them are staying at the cheapest hotels and you can tell there is some pressure, but they don’t let it get to them. They are on to the next hole. I would say patience and composure were two things I noticed.”

Johnstone called the last five months “hectic” after his spring season was cut short early and his fall season canceled due to the coronavirus, which made his experience the past few days that much more special.

He’s unsure if he’ll be needed on Saturday, but will be ready for the phone to ring. And if any golfer was smart they’d give him a call. In two days the golfers with Johnstone as their caddie went a combined 8-under.

“I think I’m in the top 10 right now combined so that’s not too bad,” Johnstone joked. “It was a cool experience and I was just happy to help.”