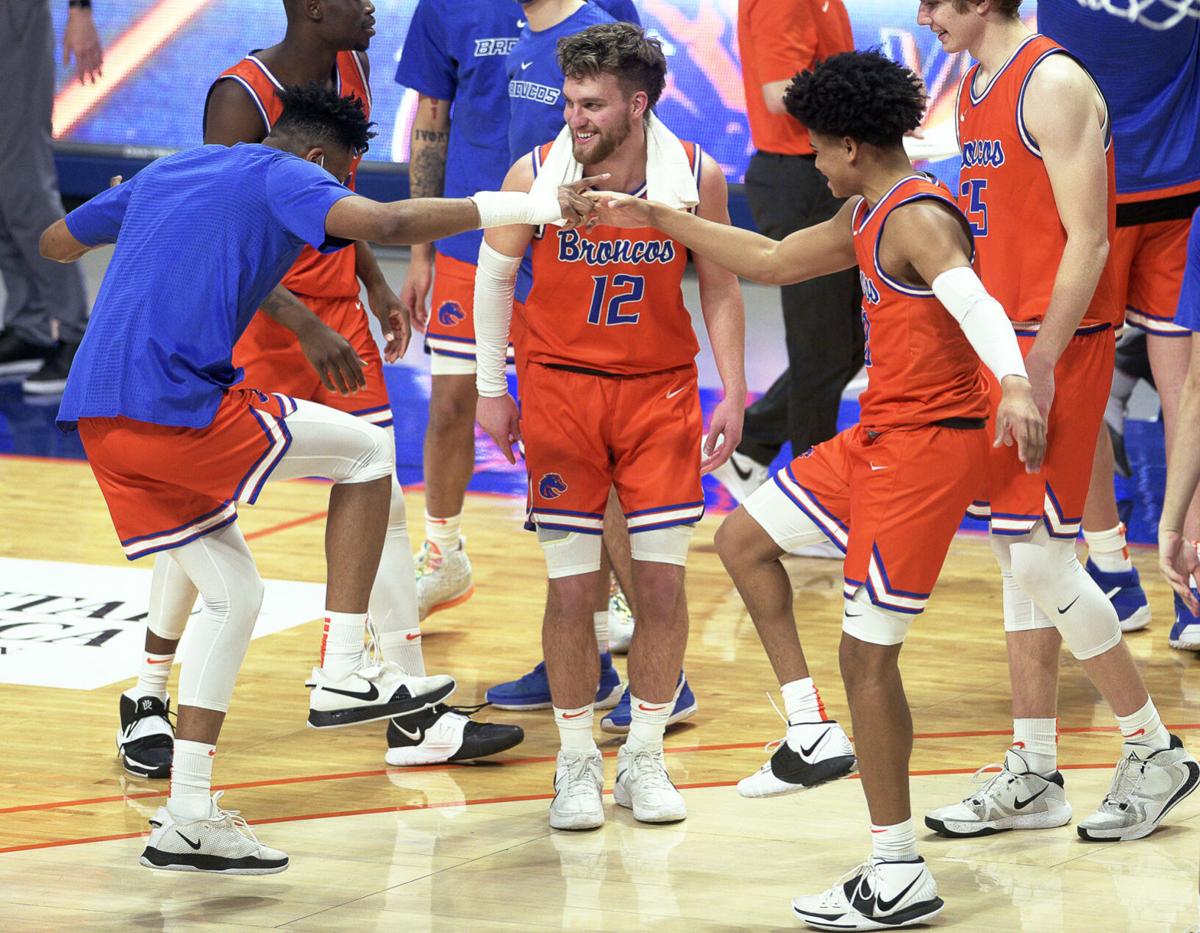 Boise State players celebrate on the court after winning the game against Utah State at ExtraMile Arena in Boise on Friday. 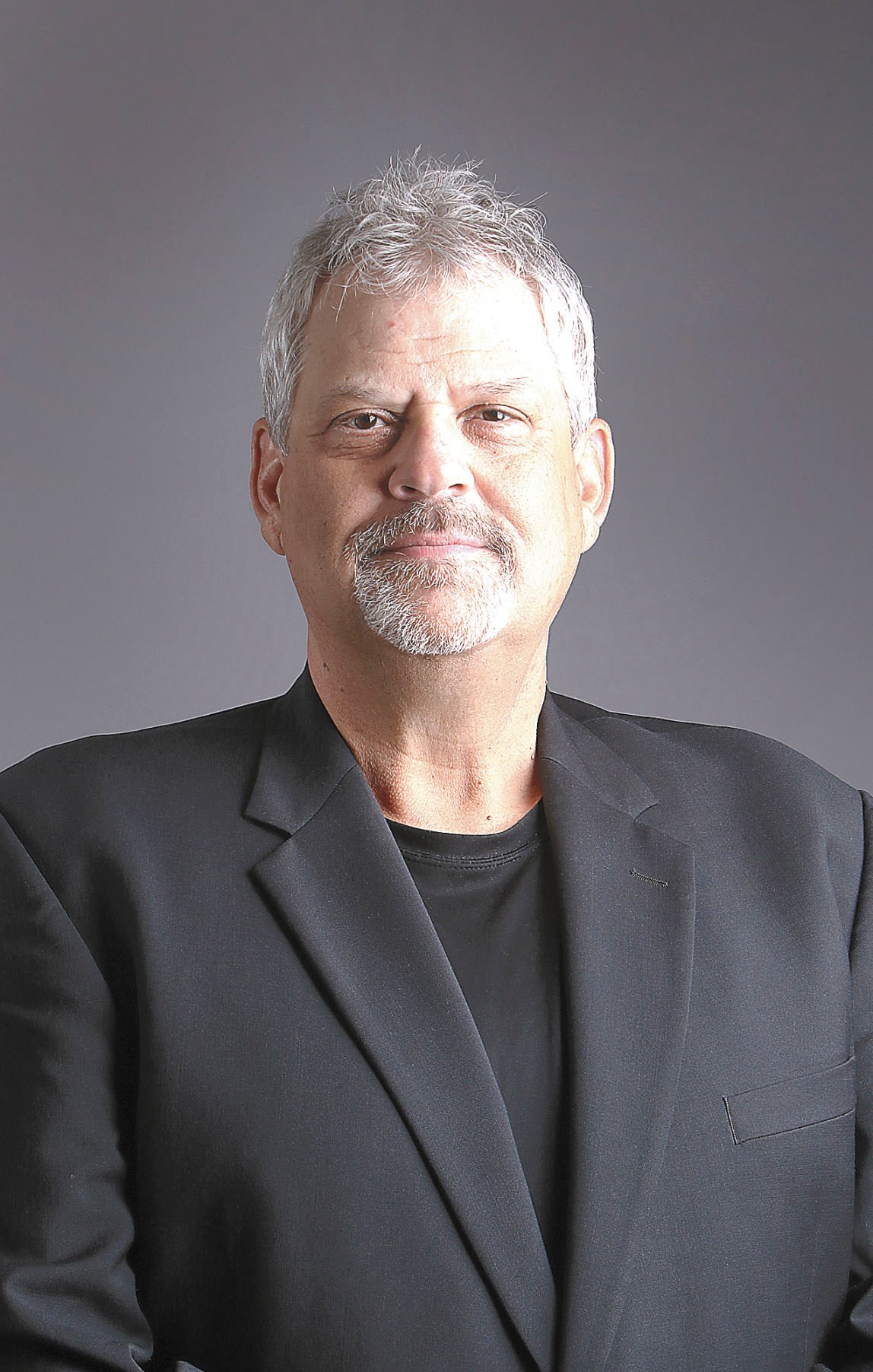 March is not a good month for Boise State men's basketball. Nothing lucky about it. Not enough four-leaf success stories. Too many bad memories.

Don’t look now, but March Madness begins in another week. Buckle up. It’s going to be a wild ride.

That’s because Boise State has its best roster in program history, and is playing its best basketball of the season.

Live reality is about to clash head-on with the Broncos’ troubled basketball history. If the past two weeks are an indication — a pair of two-game sweeps over UNLV and Utah State, monster momentum and a roster growing in confidence every day — that troubled past could be in big trouble.

Around here, March Madness is more like March Mediocrity. The history is humbling, starting with the embarrassing fact that Boise State is the only Division I program in Idaho without an NCAA Tournament victory.

The history exists for a variety of reasons, but at football friendly Boise State, the one constant surrounding basketball has been limited resources. Annual budgets are small compared to many conference peers — and the Broncos, sadly, get what they pay for: March Misery.

Those four have a combined record of 25-26 in their respective conference tournament games, and they’re 61-65 overall in games played in March.

Rice, the current coach working his magic these days, might have the least impressive March record of all four. He’s 0-2 in the NCAAs, with both appearances in First Four games, and hasn’t been back to the tournament since 2015.

Rice is 6-10 in conference tournament games — and hasn't reached a title game since the WAC in 2011.

He’s 20-22 in the month of March, when fans pay added attention and coaches are judged by their wins and losses.

Rice recently became the winningest coach in Boise State history. He’ll win enough games this season to reach a comfortable bonus incentive and earn another rollover year on his contract (and $725,000). He might even become a coveted coaching candidate this offseason.

But it’s difficult to ignore Rice’s record in March, a major flaw on his resume.

It’s also difficult to ignore what Rice & Co. are doing right now. Winning. Impressively. And looking better every time the Broncos hit the court in what has become a highly competitive Mountain West season.

Is March Madness going to mean something for Boise State this season? A special feeling is definitely brewing.

Those 80 minutes against Utah State were absolutely special.

All were on display against Utah State, one of four potential NCAA teams in the Mountain West. This Boise State team seems to handle adversity better than many of the past.

Devonaire Doutrive had a dental emergency and missed the first Utah State game.

Utah State star Neemias Queta had a career-high 32 points Wednesday night, and added 30 more Friday. The Aggies took a quick 9-0 lead Friday, and another nine-point lead in the second half.

Defensive bright spot: Rice and his staff worked miracles against Queta, who has passed Derrick Alston Jr. as the best player in the Mountain West. Boise State let Queta get his points, focused on stopping Utah State shooters at the perimeter, then double-teamed Queta at crunch time. Brilliant because it worked.

Credit to the entire coaching staff — and Boise State big men Mladen Armus and Lukas Milner. Both juniors were liabilities at the beginning of the season. Now both are rising stars, adding muscle to a roster that sometimes lacks physicality.

Armus, who has emerged as a dominant two-way post player, might be the most impressive success story of the season.

Except for the past two weeks. From the entire team. Highly impressive. Hard to be skeptical, at least right now.

“We got more to come,’’ Abu Kigab said in Friday’s post-game radio show on KBOI.

So the March Mission is clear: At the very least, the Broncos must split a two-game road series this week with San Diego State, which has been defensively dominant in eight straight wins after being swept at Utah State last month.

The Broncos must reach the championship game of the Mountain West Tournament in Las Vegas.

And they must win at least one game in the NCAA Tournament.

Hit the trifecta and 45 years of frustrating history will fade.

This Boise State team is built to make it happen.

March Madness is looming. How will the Broncos respond?

Mike Prater is the Idaho Press sports columnist and co-hosts Idaho Sports Talk on KTIK 93.1 FM every Monday-Friday from 3-6 p.m. and Bronco Game Night after every Boise State football game on KTIK and KBOI 670 AM. He can be found on Twitter @MikeFPrater and can be reached at mikefprater@gmail.com.