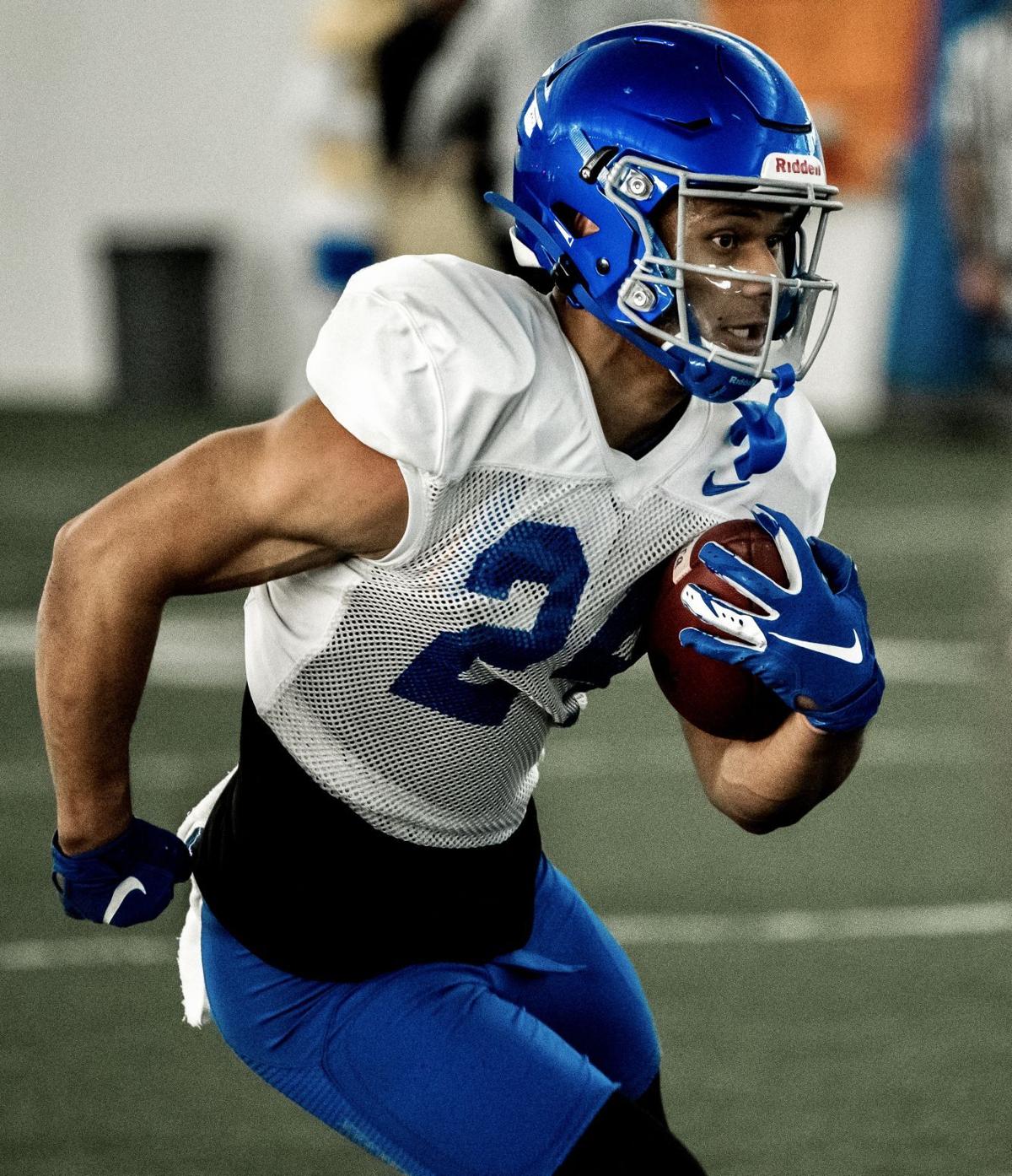 Boise State running back George Holani rushes the ball during practice on Saturday. The sophomore is looking to help the Broncos extend their streak of 1,000-yard rushers to 12. 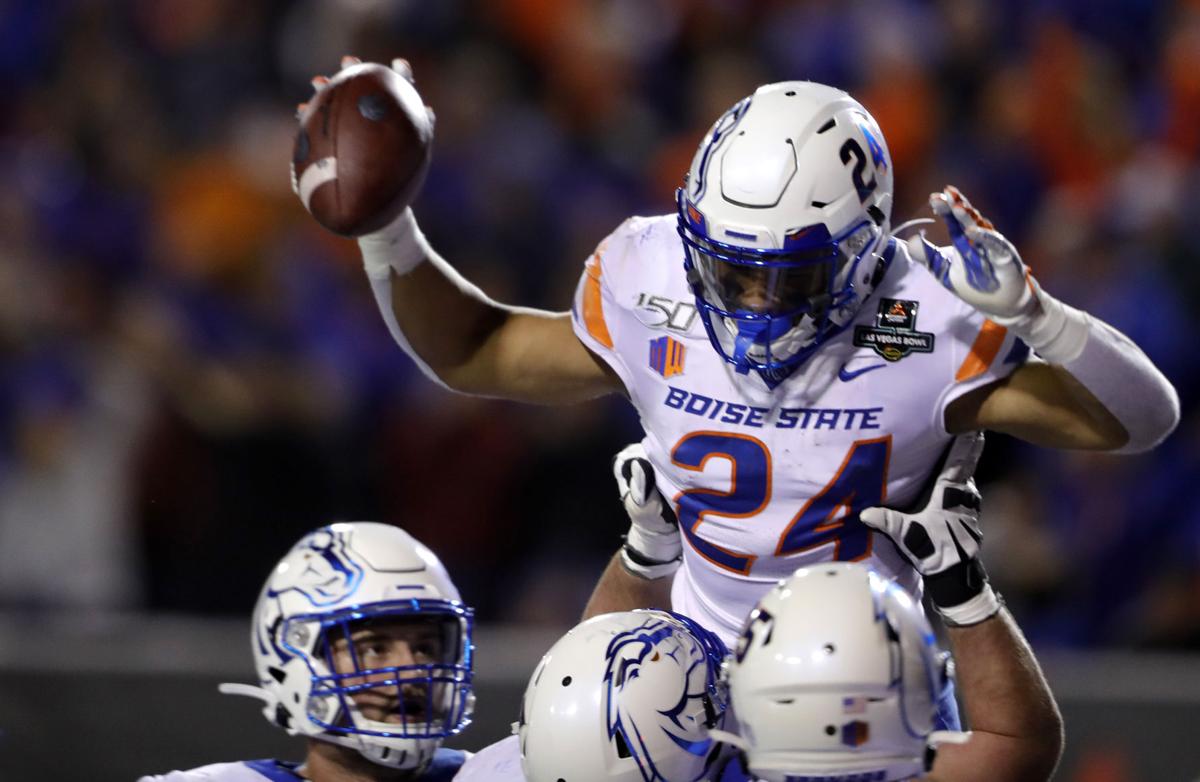 Boise State running back George Holani (24) and teammates celebrate his touchdown during the Las Vegas Bowl against Washington on Dec. 21, 2019.

Boise State running back George Holani rushes the ball during practice on Saturday. The sophomore is looking to help the Broncos extend their streak of 1,000-yard rushers to 12.

Boise State running back George Holani (24) and teammates celebrate his touchdown during the Las Vegas Bowl against Washington on Dec. 21, 2019.

BOISE — Boise State's streak of 11 straight years with a 1,000-yard rusher — currently the longest in the nation and tied for second-longest in college football history — will be harder to achieve this fall than any of the previous seasons.

The Broncos have four fewer games to work with.

With the Mountain West playing an abbreviated eight-game schedule, Boise State faces a tall task in extending a streak that dates back to 2009.

Typically, Boise State plays a 12-game regular schedule, meaning a running back would have to average 83.3 yards per game to reach 1,000 yards. In just eight games, the average would need to be 125 per game.

Boise State could qualify for the conference championship game or a bowl game, which would help. George Holani, who finished with 1,015 yards last year, surpassed the 1,000-yard mark in the Las Vegas Bowl against Washington.

“I thought about it for about 10 seconds a couple weeks back and then the thought cleared my mind and I said it doesn't matter, we're going to get it in eight games,” Venable said. “That's been mentioned and that's what we're going to do.”

But there's no guarantee Boise State will be in the conference championship or a bowl game, or even play all eight regular season games. More than 20 games across the nation have already been postponed due to COVID-19 outbreaks within a team, and the Broncos have no bye weeks to make up canceled games.

Holani, who had three 100-yard games as a true freshman last year, figures to be the one to challenge for it again next year. But his per-game average of 72.4 will need to increase for him to have a shot.

“It would be nice if I'm able to get it,” Holani said. “But we're just trying to go 1-0 every game and win these games. I'm still going to have that mentality of going in there, playing my game and doing my thing and get as many yards as I can this season.”

The streak dates back to Venable's time as a player at Boise State in 2009. Since then he's gone on to play in the CFL and the NFL before returning to the Broncos as a coach.

“It's absolutely crazy,” Venable said. “I had a couple teammates, I played here 10 years ago, so Jeremy Avery, Doug Martin, DJ Harper, all these running backs that have helped contribute to that, these are guys I know and I tell stories about to our players now.

“It's special. It's important, and definitely something we want to accomplish. It says a lot about our program. Anytime you can be in the limelight for something like that it's awesome. We want to continue that and keep the tradition because 10-11 years is cool, but 15-20 years would be cooler.”

Holani and Andrew Van Buren are likely to get most of the carries this fall with Robert Mahone transferring and junior college addition Taequan Tyler suffering a season-ending injury. Holani would seem to be the candidate to extend the streak to 12.

He was the Mountain West Freshman of the Year and a second-team All-Mountain West selection after rushing for 1,014 yards and seven touchdowns on 192 carries (5.2 yards per carry). He also added 26 catches for 206 yards and three touchdowns.

Now as a sophomore he hopes the year of experience will make him even better.

“I'm just putting my head down and continuing to work,” Holani said. “I didn't think any of that would happen (last year), but I have great coaches and great running backs here to guide me and tell me what's going on, so it's helped a lot.”

Reminded that there could be as many as 10 games if Boise State plays in the conference title game and a bowl game, Venable smiled.