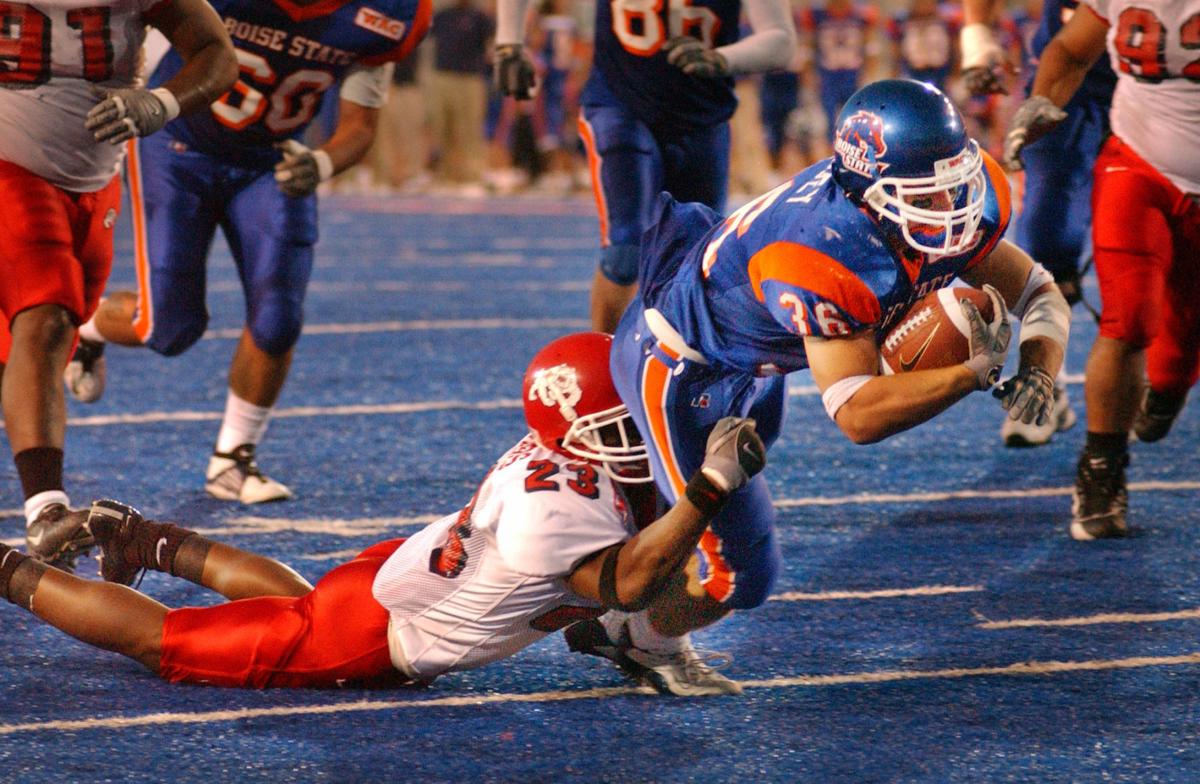 Boise State’s Brock Forsey, right, pushes for a first down near the goal line as he gets tackled by Fresno State’s James Sanders during a game Oct. 18. 2002. 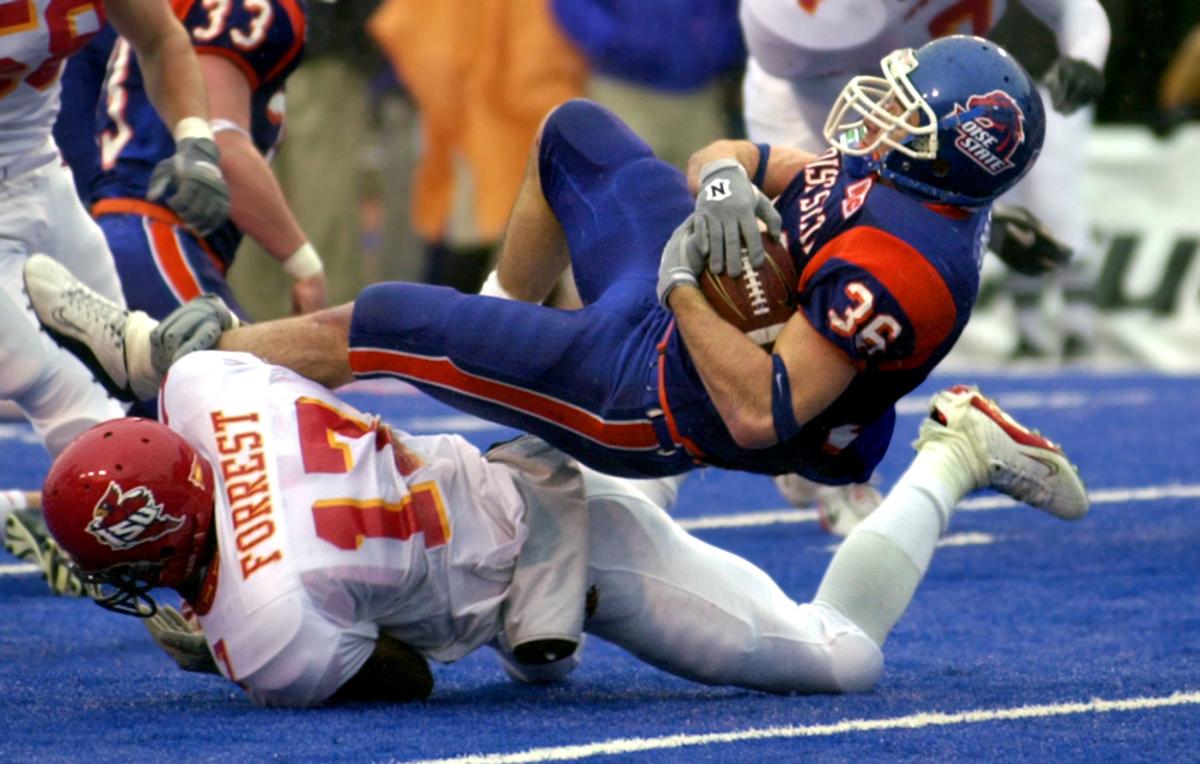 Boise State running back Brock Forsey (36) hurls himself over Iowa State defensive back Anthony Forrest to put his team in scoring position during the Humanitarian Bowl on  Dec. 31, 2002.

Boise State’s Brock Forsey, right, pushes for a first down near the goal line as he gets tackled by Fresno State’s James Sanders during a game Oct. 18. 2002.

Boise State running back Brock Forsey (36) hurls himself over Iowa State defensive back Anthony Forrest to put his team in scoring position during the Humanitarian Bowl on  Dec. 31, 2002.

With spring sports canceled and no Boise State games or practices to write about, the Idaho Press is using this time to check in with former Boise State athletes. This is another entry in our series called ‘Where are they now’.

Brock Forsey was a Centennial High School graduate and a running back for the Boise State football team from 1999-2002. He is tied for second on Boise State’s all-time list with 50 career touchdowns and ranks third with 4,015 rushing yards.

He’s first with 813 carries, and at the time set Boise State’s single-season rushing touchdown mark with 26 in 2002. Jay Ajayi passed him with 28 rushing touchdowns in 2014, but Forsey remains second. Forsey played for both Dirk Koetter and Dan Hawkins, and the Broncos went 40-10 during his four years. He helped the Broncos to their first ranking in the Associated Press poll in program history as a senior in 2002. Forsey was a sixth-round pick by the Chicago Bears in the 2003 NFL Draft and played parts of three NFL seasons before retiring.

Idaho Press: What’s life like for Brock Forsey these days?

Brock Forsey: When I got done playing football I moved back to Boise and got a job working at Pioneer Title Company doing marketing for them. I was with them for 10 years. Now I work at a company called Engineered Floors. They are a flooring manufacturer based out of Dalton, Georgia, and what I do is I’m the territory manager for Idaho. Basically I work with local flooring stores in town and work on the wholesale side. I sell them the material. My area includes Twin Falls, Rupert, Burley, I have some accounts up in McCall, Sun Valley. I’ve been with the company for almost four years now. What got me into flooring was my dad. He did the same thing I am doing now. He did it pretty much his whole life, and when he retired they needed somebody to fill his position and it just worked out for me to come in and take over his territory for him. I’m married, my wife Jackie and I have been married about 12 years now, and we have two daughters, Leila is 11 and Hayden is 8.

IP: How do you look back on your time at Boise State?

BF: My time at Boise State was a lot fun. Being a local guy who walked on to the team and the time I was there seemed like it was when Boise State started to become a nationally known brand. At that time we were in the Big West and won a couple championships and then went to the WAC and got a couple WAC championships. That ‘98 team when I came in was really part of what helped the program build momentum in the right direction and become a winning program. Looking back at the facilities we had and our locker room. At the time we had metal cage lockers, it was like a high school locker room. Now you go in there and it looks like a legitimate top-tier college football program with the facilities and amenities. It’s pretty impressive to see it all from the time I was there to what it’s become over the years and how it’s evolved. It’s gotten bigger and better and it’s cool to look back at it and know we were part of the group that got the program going in the right direction to become what it has today.

IP: Did it make your time there any more special since you were a local kid that grew up in Boise?

BF: Definitely. I look back at the career I had at Boise State and coming out of high school if you had told me I’d leave with the records I broke at the time, I wouldn’t have forseen that. I just wanted to play for Boise State. When I got there I didn’t know what to expect, but playing on the scout team, I realized pretty early that I could definitely play with these guys. Looking back at the stats and the career, its pretty special to be on a lot of those lists at a storied program.

IP: You set a record with 26 rushing touchdowns your senior year in 2002. Jay Ajayi surpassed it with 28 in 2014, but how did you score so many touchdowns?

BF: Early on in the season I don’t think I had that many touchdowns. David Mikell and I were kind of splitting time and he was getting quite a few touchdowns early, but midway through the season they just started piling up. Anytime we got the ball down inside the 5-yard line they were going to pound it in. They just started adding up and it was three or four a game and at the end of the season I didn’t realize how many I had.

IP: You played for both Dirk Koetter and Dan Hawkins. What was that like?

BF: My first two years were under Koetter and my junior and senior years were under coach Hawkins and that was when Chris Petersen came over as offensive coordinator. When I was getting recruited to Boise State, Houston Nutt was actually the head coach and was telling me he’d put me on scholarship. That changed when he left for Arkansas and coach Koetter came in and said we’ve used up all the scholarships, but if you come in and walked on and did what we think you can do, we’ll put you on scholarship and it all worked out. When Koetter left for ASU it was a good transition because Hawkins had been in the program and we were able to keep some of the staff, and obviously when coach Petersen came over from Oregon, it was pretty apparent early on that he was a smart guy and knew what he was doing. A lot of my success was because of coach Pete orchestrating the offense.

IP: Do you have a favorite game or play from your time at Boise State?

BF: Probably the one that sticks out to me the most was the 2001 game at Fresno State. At the time they were ranked in the top 10 and we were down on the 5-yard line and we decided to run an option play with Ryan Dinwiddie, and everybody in the stadium knew he wasn’t going to keep it, so he pitched it to me and two defenders were coming at me and for whatever reason I tried to jump from the 5-yard line and went up and over them. But I landed in the end zone and that tied the game and then obviously at the end we scored on the long touchdown pass to win the game. That play sticks out in my mind. That game was really a turning point. When we went down to Fresno and knocked them off, it built a lot of confidence in the program that we could play with some of the power schools.

IP: What was it like getting to play in the NFL?

BF: It was a great experience. I was just hoping to get signed somewhere, but Chicago called in the sixth round, it was the GM at the time, and he said ‘Hey Brock this is Jerry Angelo and I wanted to see if you wanted to come to Chicago’, and I said that would be great, and he said well OK, we’re taking you with this pick. A week later I was on a plane for Chicago. I had a good preseason and made the roster and there was a game where I had like 134 yards and a touchdown, and I didn’t even find out I was starting that game until the night before. It happened quick, but the game went good and I got over 100 yards and a touchdown and we beat the Arizona Cardinals. But the coaching staff that liked what they saw, they got fired after we went 7-9, and Lovie Smith came in and they made some changes and Thomas Jones got signed to a multi-year contract and we were heavy at running back and I got released after the last preseason game. Miami signed me pretty quickly and I played for them for a year, mostly on special teams, and then Nick Saban got hired as the coach down there, and I got released in the offseason. I spent a little time with Washington the next preseason, but after I got released by them I didn’t get picked up again. When I look back at my career I would have liked to have played longer, but given the opportunities I had, I went in and produced and got out of it relatively healthy. I didn’t tear up my knees or any ligaments or anything. I could have played in the CFL, but I decided to come back to Boise and start a family and I didn’t know what I wanted to do career wise, but fortunately playing in the NFL for a few years I was financially stable to figure out what I wanted to do.

IP: Still living in Boise, how much does Boise State and the football program still mean to you?

BF: The overall experience I had at Boise State, it was just awesome to play for the hometown team and have the success I did. The friendships I made with the guys while I was there. Scott Huff was in my class, Andy Avalos was my roommate in college. It’s kind of cool to see the former players and people you played with to see their careers and how well they are doing. Being a local guy, the success of the program, as I said before, I certainly take some pride in it because I feel like we had a part in helping the program get to where it is today.