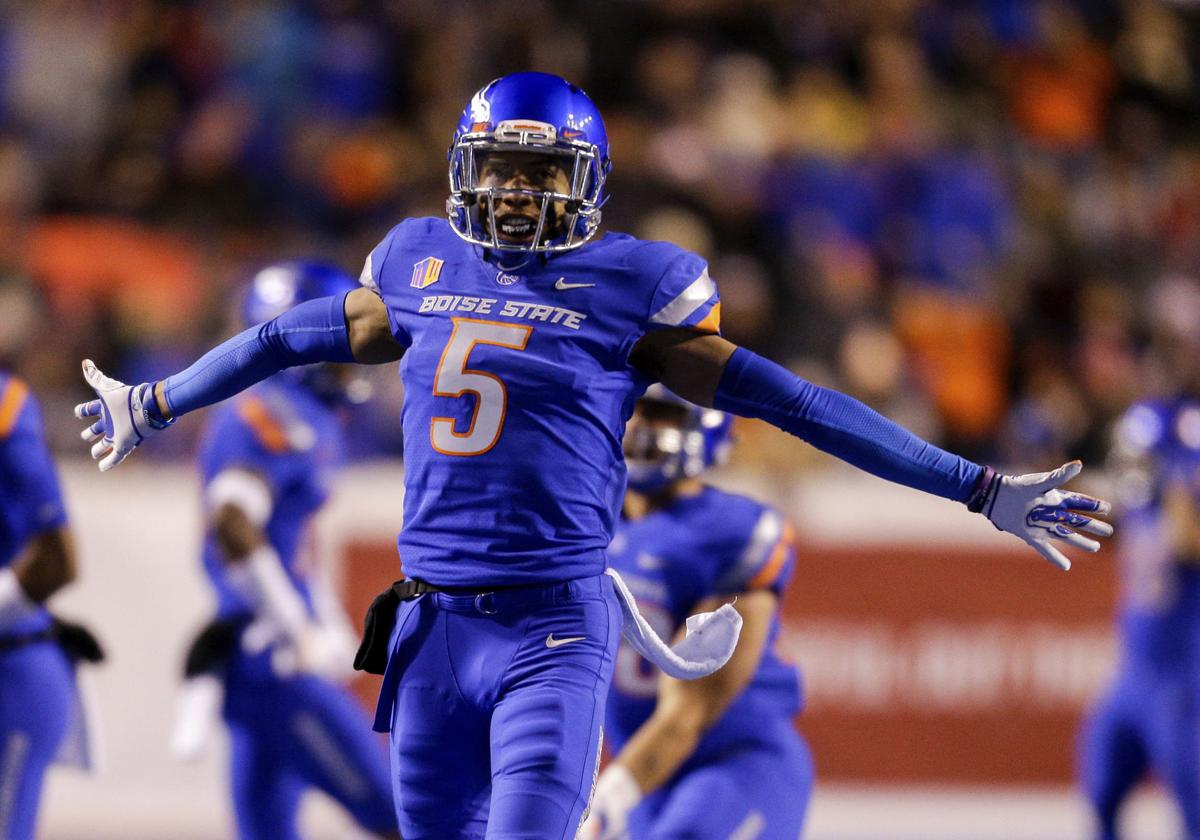 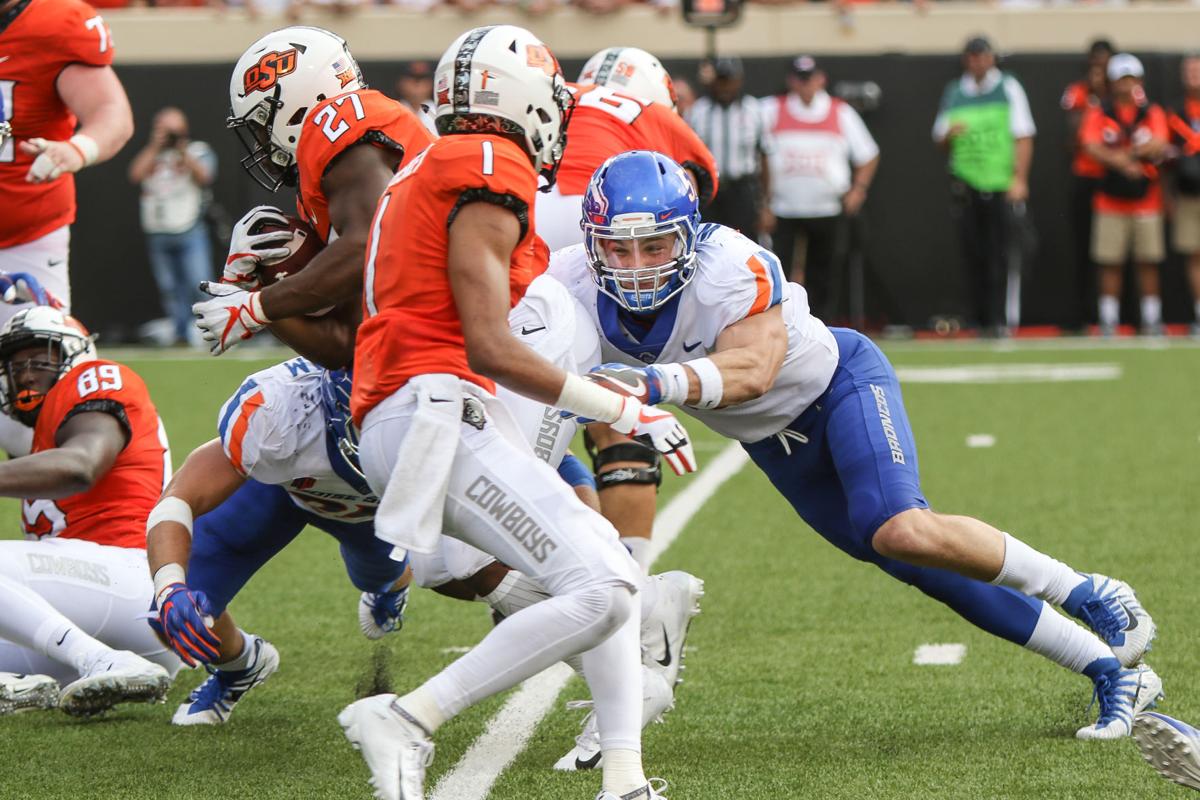 “It feels like it sometimes,” Franklin joked. “We’ve been together almost six years now.”

Tyler enters his sixth season with the Broncos after a redshirt season, and a pair of torn ACLs have prolonged his career.

He’s one of two sixth-year seniors on the defense, joining STUD Sam Whitney — who also has dealt with a rash of injuries during his time at Boise State. But both are healthy now and hoping to make the most of the abbreviated 2020 season.

“It’s obviously been a long career, six years, with the injuries and stuff,” Whitney said. “But personally I feel like the sky is the limit for me still. As long as I’m healthy and contributing, it’s going to be good. I’m excited. Anything I can do for the team, I’m willing.”

The two arrived just months after Boise State won the 2014 Fiesta Bowl. Tyler redshirted in 2015 and appeared to be headed for big things — starting the first three games as a redshirt freshman in 2016 before suffering a torn ACL.

He tore the other ACL during training camp the following year and was forced to miss that season. In all it was three games in three years for Tyler before coming back to play in 2018 after missing 24 straight games due to injury.

Tyler played in 12 games last year as a backup and enjoyed his first career interception at Utah State. With three safeties leaving the program from last year’s team, his journey might have all been worth it. He could be in for more playing time this fall.

“It’s exciting knowing I could get on the field more than I have the last couple years,” Tyler said. “I’m feeling healthy and good. It’s a good feeling. I’m just happy.”

Tyler, who has been a strong voice for Boise State’s players for off-the-field issues such as social justice and getting registered to vote, has seen plenty during his time at Boise State. He just missed the Fiesta Bowl, but has been part of a canceled bowl game, a game moved due to a hurricane, two conference titles and most recently a pandemic that threatened the cancellation of the season.

“I’ve seen a lot more than the majority of college football players have,” Tyler said. “It doesn’t feel like I’ve been here that long. It goes by quick. The days are slow, but the years are fast. It just feels great to still be here.”

Franklin praised Tyler for his perseverance, hanging in longer than some players would have given the ACL injuries in consecutive years.

“He’s played for a while man and he’s a good voice in the room and a leader of our crew,” Franklin said. “He’s been here for such a long time so guys lean on him for a lot. He’s a great young man, very smart, and I love having him around. He’s a heck of a football player as well. I’m honored to be his coach.”

Whitney, a three-star recruit and the No. 7 defensive end in the 2015 recruiting class from Rivals.com, redshirted in 2015 and saw action in six games in 2016 as a redshirt freshman. He was off to a strong start for his redshirt sophomore year in 2017, starting five of seven games and recording 21 tackles, a sack and a forced fumble before suffering a torn patella tendon in his right knee that ended his season.

He played sparingly in 2018 and was ready to make an impact as a redshirt senior last fall before suffering a torn ACL during fall camp — which required his quad tendon to repair.

But after months of deliberation and rehab he elected to return for a sixth season this fall and is finally healthy and again hopeful of contributing.

“I feel as healthy as I ever have,” Whitney said. “My knees don’t hurt anymore. I used to have chronic knee pain, so I’m just excited to get back. It was a lot to go through those injuries, but at the end of the day it’s a really rewarding feeling to be back out there.

“There were days for sure post surgery, where I’m looking at my knee and it’s three times the size it should be and it’s purple and black and I thought maybe this is not worth it. But having my teammates and my brothers and the overall thrill of college football, I just love it too much. I’m glad to be back.”

And both aren’t just here because they can be. The two figure to both get significant playing time on defense and will be counted on by the Broncos to produce.

The crazy part about all this? They might not be done yet. All players were given an extra year of eligibility due to a rule passed by the NCAA given the uncertainty of the season. Basically this year doesn’t count, meaning both Whitney and Tyler could come back for a seventh-year in 2021 should they want to.

“That’s pretty crazy. I’ve never heard of a seventh-year senior before,” Tyler said with a laugh. “Between me and Sam, we’re thinking about making a pack. If he stays, I’ll stay. If he goes, I’ll go. We don’t know yet. It just depends on how the season goes and how we feel at the end of the year.”

The only downside to coming back? More playful ribbing from teammates and coaches about how long they’ve been here.

“If I had a dollar for every time I got an age joke around here I’d probably be a millionaire,” Tyler said. “But it’s worth it. It’s fun still being around here.”