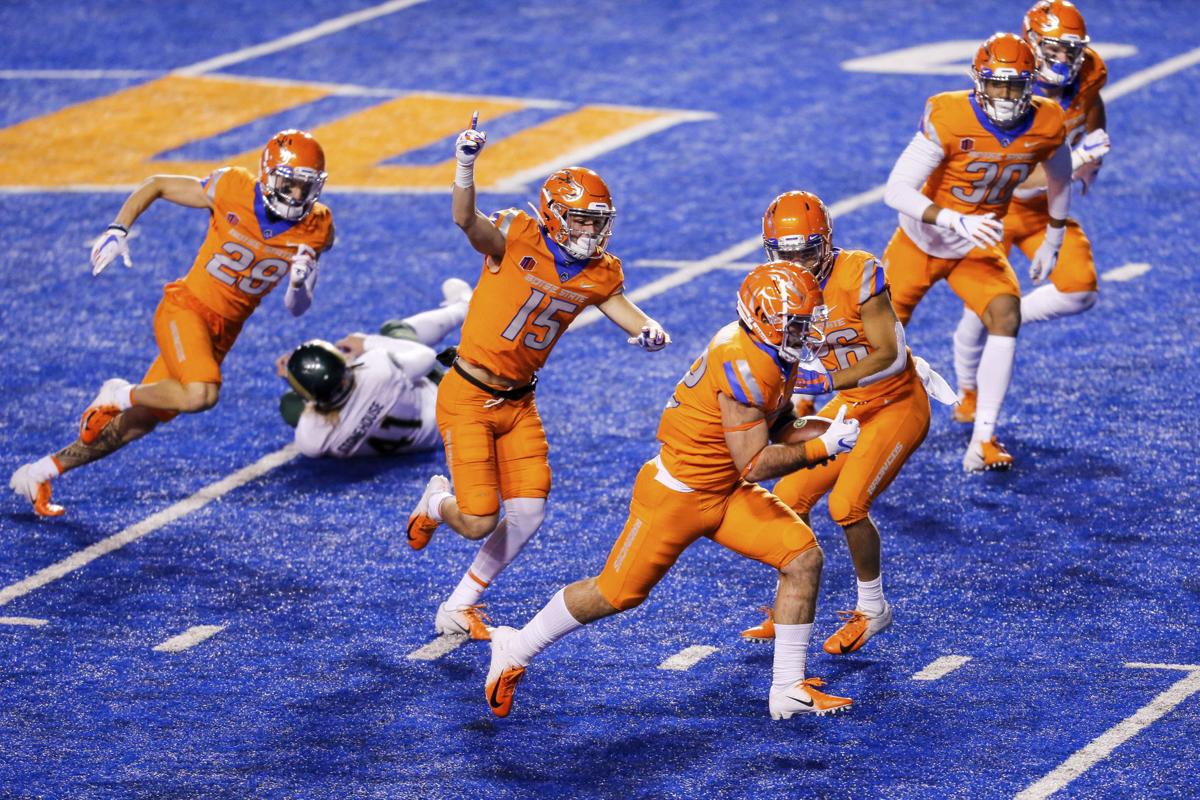 Boise State linebacker DJ Schramm (52) runs with the ball for a touchdown after recovering a blocked Colorado State punt during a game Thursday. 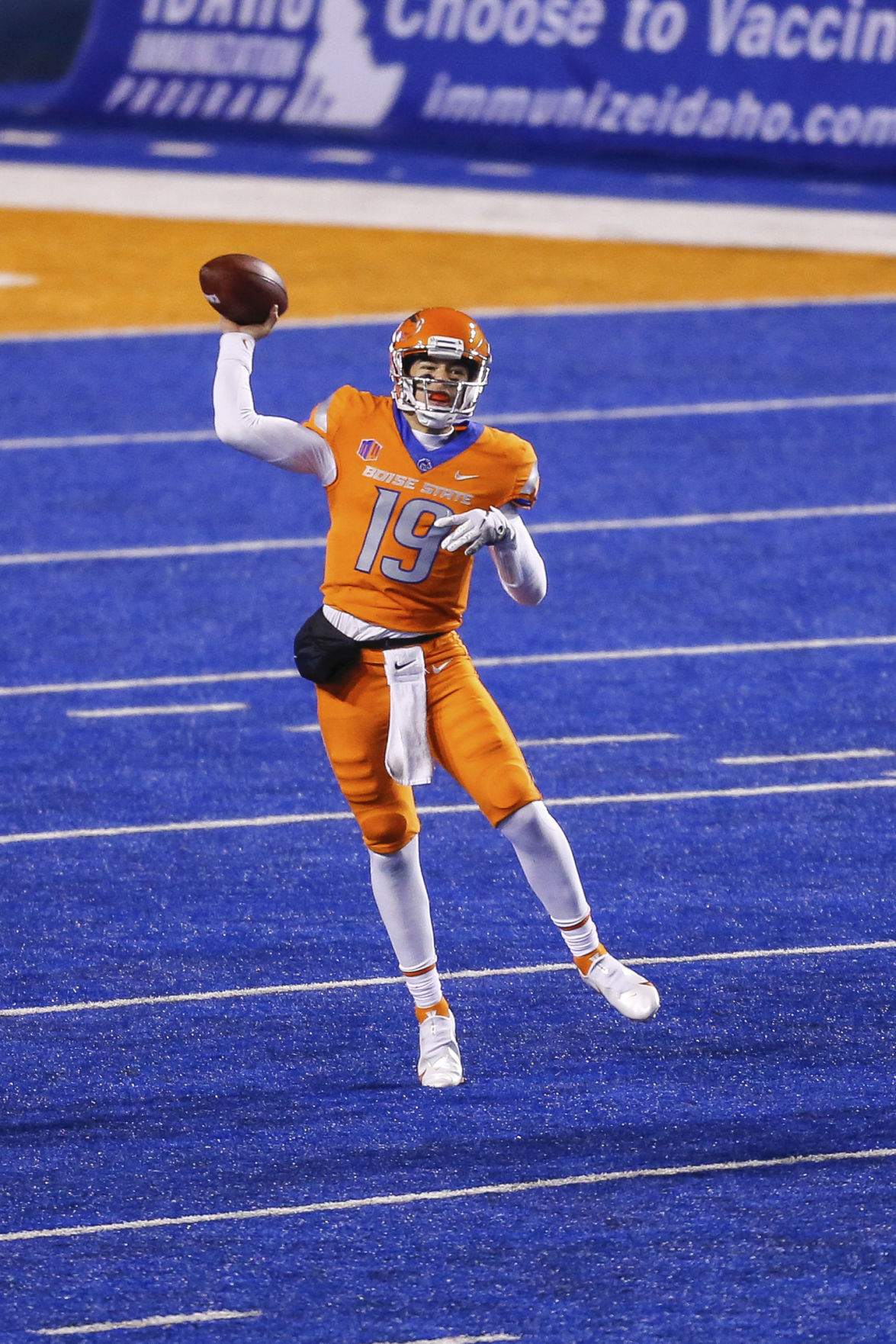 Boise State linebacker DJ Schramm (52) runs with the ball for a touchdown after recovering a blocked Colorado State punt during a game Thursday.

Not only did second-string left tackle Ben Dooley have to move over and play defensive tackle at practice during the week, but the redshirt freshman actually got in the game and made two tackles.

“Bringing an O-lineman over and having him play D-line, that’s not something you really consider at this level when you have the depth you should have,” Boise State coach Bryan Harsin said. “But right now we don’t.”

Boise State was without 14 players due to COVID-19 protocol, including nine that were out due to positive tests. Five others, according to the school, were out due to contact tracing guidelines.

At least four others were out due to injuries, leaving the Broncos with a lack of depth at several positions. Boise State nearly didn’t have enough interior defensive lineman to meet the Mountain West threshold to play the game.

The Broncos had enough players to play, but barely. More positive tests or injuries could put Saturday’s game at Hawaii in jeopardy.

“It’s concerning,” Harsin said. “When you start to think about not just the game but how we are operating daily with the people that we have and the players that we have and making sure we’re doing it the right way.”

There are three numbers a team must have before they can request a game be canceled. Teams must have 53 available players including seven offensive linemen, four interior defensive linemen and one quarterback.

Boise State was without four interior defensive linemen (Keeghan Freebon and Herbert Gums are out for the season with injuries) and dressed just five, including three true freshmen or redshirt freshmen. Dooley became the sixth when he made the switch during the week.

The Broncos also were without five offensive linemen and dressed just 10. Starting left tackle John Ojukwu went down with an injury during the game, leaving them with nine — two above the limit.

Boise State could have dressed up to 74 players due to Mountain West rules. It only listed 68 players on the dress list, but three of them didn’t actually dress due to injuries. That means the Broncos went into the game with 65 available players.

The Broncos had 35 players listed on the non-dress list, including eight defensive backs.

“Hopefully, moving forward, we are able to keep that more under control, because as a team you never want to lose guys,” senior captain Riley Whimpey said. “Hopefully we can get those guys back sooner than later and we can minimize the guys that are going to be out in the future so we don’t have to go through that.”

There were 15 games either postponed or canceled this weekend due to COVID-19 protocols involving one of the two teams. That included games from eight of the 10 conferences, including the Mountain West. Air Force at Wyoming was canceled due to cases within the Air Force program.

Boise State has played each of its first four games as scheduled to this point. But with things going in the wrong direction — the Broncos have seen an increase in COVID-19 absences in each of the four games — it’s conceivable they could soon be in the same spot.

“You’re seeing teams that are canceling games and teams that can’t field a team in their opinion,” Harsin said. “Maybe literally they can, they have the bodies, but they may not have the guys that can actually play or are prepared to play, and the coaches have to make a decision. Can we play and this guy that’s gotten very limited reps, is he able to play four quarters of a football game?

“Depending on how things go with testing and other injuries and things, we’ll continue to face some of these challenges.”

Boise State does not identify the players that are out due to COVID-19 protocols.

Three players missed their second straight game for unknown reasons — punter Joel Velazquez, linebacker Brock Miller and defensive back Tyric LeBeauf — and would seem to have a chance to return for Saturday’s game at Hawaii. Harsin confirmed they were “hoping” to get a few back this week.

Cases in Ada County have skyrocketed and new records for cases are being set on a daily basis. While Boise State’s players and staff test three times per week, they are not staying in a ‘bubble’ like players in the NBA or NHL did. They still go to class and live either in student housing or off-campus apartments or houses.

They face the same challenges in avoiding the coronavirus that the normal Boise resident would, and lately — just like the numbers across the area — it’s been trending in the wrong direction.

“We’ve done a really good job. I feel like what we’re doing here and our trainers ... we have a really good process. Things just happen, right?” Harsin said. “We’re going to really try to keep our guys healthy at all times. ... You can just imagine, you do all these things, you think you are OK and then you’re out. I hope the numbers and everything, not just here but everywhere, get better and it doesn’t affect us as much.”

But regardless of how well the Broncos are trying to follow protocols and prevent exposure, it became a legitimate issue last Thursday night. Harsin said the Broncos had to limit practice time last week due to a lack of players available.

Boise State typically would fly to Hawaii on a Thursday for a Saturday game to have the extra day to acclimate from the long travel and three-hour time difference. But the Broncos won’t leave until Friday, in part because they won’t be allowed to leave the hotel until heading to the stadium for the game.

The Broncos were able to play last week against Colorado State, and those that did posted an impressive 52-21 win. But in a forgettable 2020, who knows what will happen moving forward.

“It’s a juggling act of being focused, but also being real about what we’re dealing with each week,” Harsin said. “It’s a challenge. I think about it every day.”