Boise State quarterback Hank Bachmeier (19) leaves the field after losing his helmet from a hit against Florida State on August 31, 2019, in Tallahassee, Fla. 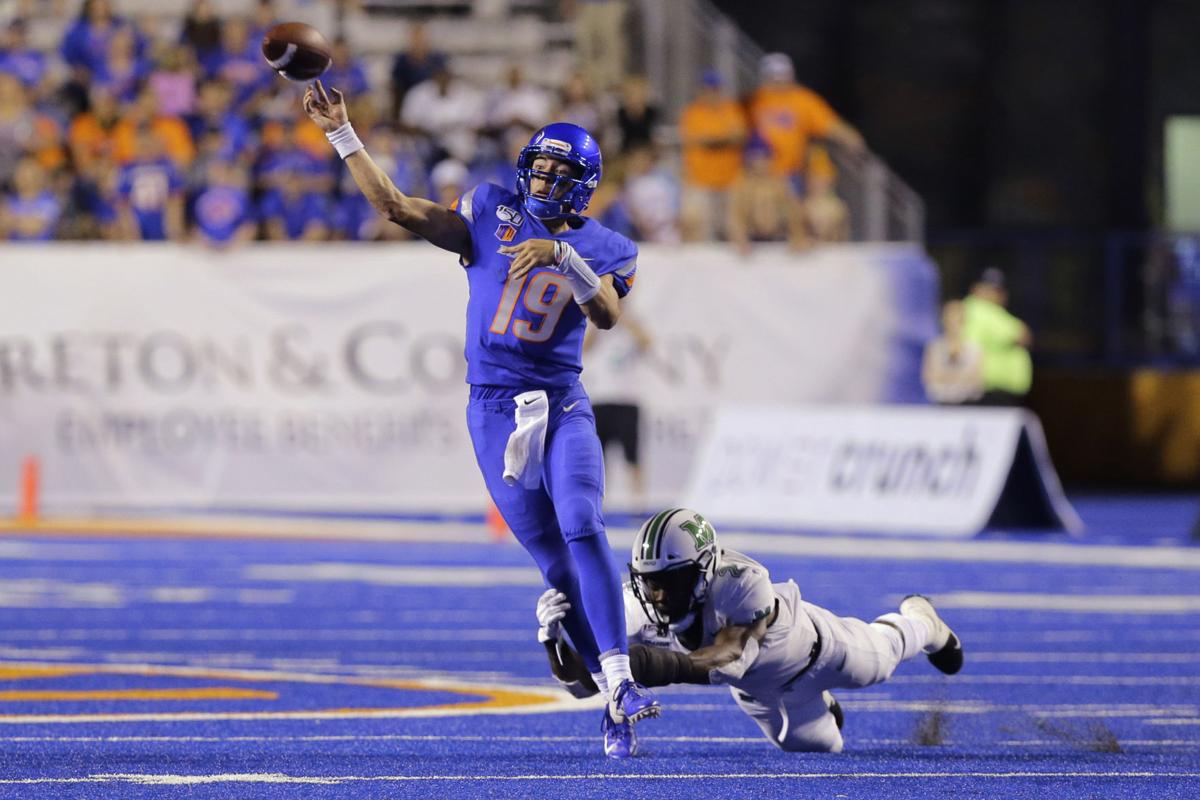 Boise State quarterback Hank Bachmeier (19) leaves the field after losing his helmet from a hit against Florida State on August 31, 2019, in Tallahassee, Fla.

When Eric Kiesau was promoted from wide receivers coach to offensive coordinator and quarterbacks coach in January, he sat down with quarterback Hank Bachmeier to watch video together of a game last season.

Kiesau was focused on Bachmeier’s demeanor, footwork and mechanics in what amounted to an introductory meeting between the two as they got to know each other better as a player and coach.

One play in particular brought a question from his new position coach.

“I said ‘what were you thinking here?’” Kiesau said. “He said ‘coach, I had so many things on my mind that I couldn’t really think.’”

Bachmeier went 7-1 as the starter as a true freshman, passing for 1,879 yards and nine touchdowns to six interceptions. His 407 passing yards in the season opener at Florida State were the most by a Boise State quarterback in his first start since the program joined the FBS level in 1996.

The talent, instincts and play-making ability were all clearly there. His decision-making, at times, wasn’t — which would result in big hits due to staying in the pocket too long or refusing to slide while scrambling.

Bachmeier won his first six starts to help the Broncos start 6-0 and climb in the top 25 rankings, but suffered an injury that forced him to miss a loss to BYU. He returned to start in a win against San Jose State, but left with a different injury and missed the final four games of the regular season and the Mountain West title game.

He returned somewhat controversially to start the Las Vegas Bowl against Washington despite not taking a snap in seven weeks. And he predictably struggled, passing for just 119 yards and tossing two crucial interceptions in a 38-7 loss.

With the whirlwind debut season behind him – the Las Vegas Bowl was barely eight months from his senior prom — the Broncos are hoping Bachmeier can take what he learned on the fly and apply it to his second year this fall.

“Now he has eight games where he can go back and reflect and watch himself and really correct what needs to be corrected,” Kiesau said. “He can take a deep breath and evaluate what he did and correct some things he wants to get better at.”

The ongoing COVID-19 pandemic has made things a bit tougher for Kiesau and Bachmeier to work together this spring, but they’ve done what they can through video conferencing, text messages and phone calls. The two worked together previously, but the quarterback-offensive coordinator relationship is one that must work for an offense to be successful.

And that’s why Kiesau emailed Bachmeier with a homework assignment.

While Bachmeier is the presumed starter, Chase Cord likely will push for playing time and have a role with the offense. Cord made two starts last season but appeared in eight games, mostly with a package of plays as a dual-threat option. He passed for 670 yards and nine touchdowns while tossing three interceptions.

Most thought Cord would win the starting job last fall, but his recovery from a torn ACL was slow enough to allow Bachmeier to grab the starting spot. Cord also battled multiple mysterious injuries during the season that kept him from getting additional playing time when Bachmeier was out.

“I had a very candid conversation with Chase when the change happened and I was given the quarterback coach role,” Kiesau said. “I said you have to go in with the mindset that you want to compete for the job and go get it, and his eyes lit up. I don’t think he ever thought he couldn’t be the starter, but he thought ‘wow, Hank came in and played really well, what does that look like for me?’

“I said if you come in and ball out and you guys have a healthy competition, it’s going to make you better and Hank better and its going to make the team better. You never know what’s going to happen, especially at the quarterback position. At any time the guy who is in front, anything can happen and you have to be ready.”

Kiesau said Cord would likely have a role again, even if he’s not the starter.

“You saw last year we played three quarterbacks,” Kiesau said. “If you have a value and do something well consistently, we’ll find a place to get you on the field. He’s a very talented, great kid and the players love him. He’s an asset and we’ll find a way to use him to win football games.”

Late Monday the Broncos announced the addition of USC graduate transfer quarterback Jack Sears, which is intriguing to say the least. Sears, who is immediately eligible and and has two years of eligibility remaining, likely wouldn't have signed with the Broncos to be third string.

Cord would seem like a potential transfer candidate, but has said as recent as March that he wasn't entertaining that thought. Sears, a former four-star recruit, started a game in 2018 as a redshirt freshman but took 2019 off to focus on gaining his degree.

The other scholarship quarterback on the roster in 2020 will be incoming freshman Cade Fennegan, who likely will redshirt. Walk-on quarterbacks Zach Matlock and Andy Peters are also on the roster.

As for Bachmeier’s answer to the film study queston?

“He didn’t have a great answer, he really didn’t,” Kiesau joked. “He’s so intellectual that he overthinks things sometimes. … He’s so thorough, but when you point things out to him and show him, he says ‘OK that’s a good point, I see it now.’”

The Broncos hope to see plenty of ‘it’ from Bachmeier this fall.

HE SAID IT: “He just goes out and makes stuff happen,” Kiesau said of Bachmeier. “I think once he settles down .... This kid can be really special down the road. It’s just that balance of being that really natural football player with a good fundamental base.”