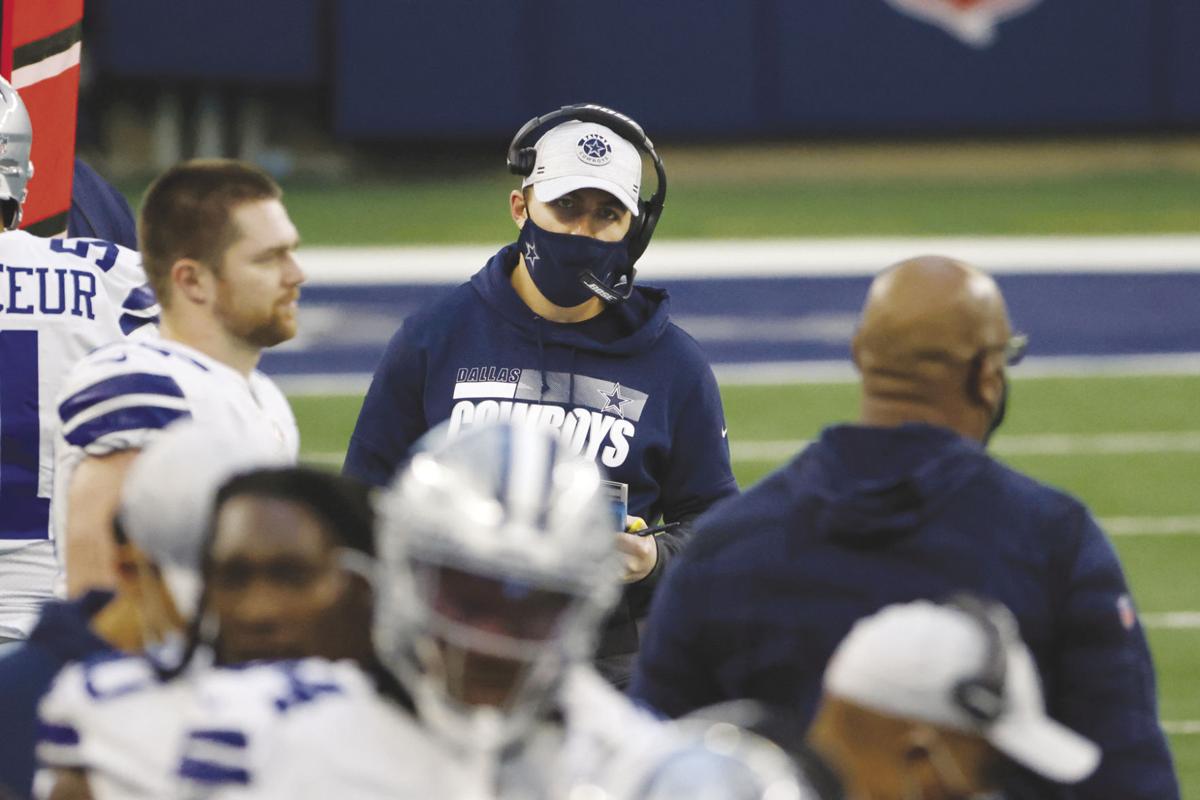 Dallas Cowboys offensive coordinator Kellen Moore walks on the sideline during a game against the Philadelphia Eagles on Sunday in Arlington, Texas. 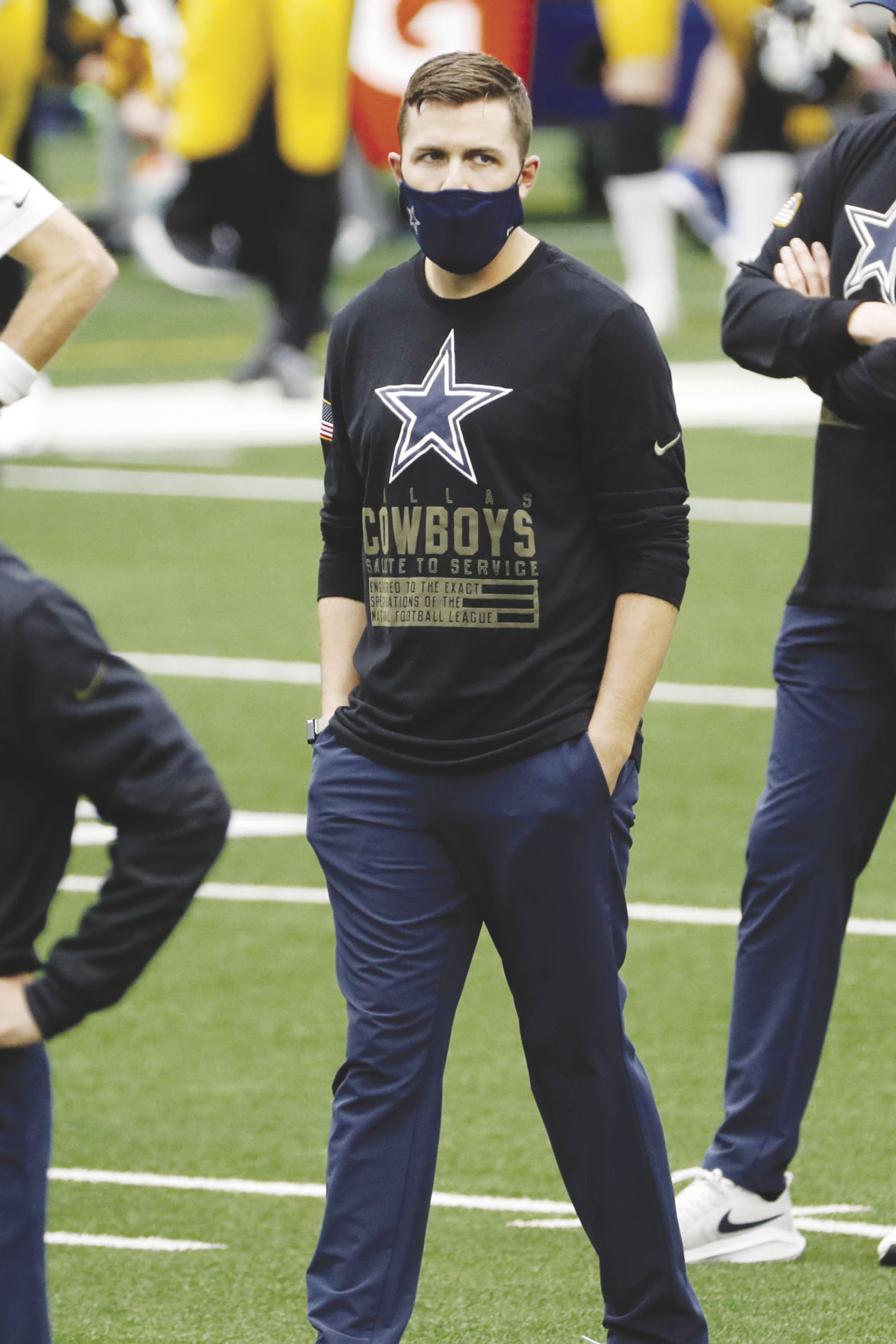 Dallas Cowboys offensive coordinator Kellen Moore watches warmups before a game against the Pittsburgh Steelers on Nov. 8 in Arlington, Texas.

Dallas Cowboys offensive coordinator Kellen Moore walks on the sideline during a game against the Philadelphia Eagles on Sunday in Arlington, Texas.

Dallas Cowboys offensive coordinator Kellen Moore watches warmups before a game against the Pittsburgh Steelers on Nov. 8 in Arlington, Texas.

Former Boise State quarterback and current Dallas Cowboys offensive coordinator Kellen Moore confirmed Monday that he is interested in potentially becoming the next head coach of the Broncos.

Boise State has been looking for a head coach since Bryan Harsin left Dec. 22 for Auburn. Moore and former Boise State linebacker and current Oregon defensive coordinator Andy Avalos are seen as the two leading candidates for the job.

“Obviously Boise is a unique one for me,” Moore told reporters in Dallas Monday evening. “It’s special to me. I love that place. Obviously just going through the process right now and I’m just focused on this game. We’ll kind of let all of this stuff play itself out and we’ll see where it’s at.”

Dallas is still alive for the NFC East title and a spot in the playoffs heading into Sunday’s regular season finale against the New York Giants. Any announcement of a hire likely wouldn’t come until after that game.

He ranks second in college football history with 142 passing touchdowns and sixth with 14,667 passing yards. His three losses at Boise State came by a combined five points.

Asked if he wanted to be a head coach, Moore said, “Yeah, I want to be ahead coach … like anything, I’m focused on this job right now. We’ll go through this process and we’ll see where it’s at.”

He then told reporters, “that was really boring, sorry guys” before questions turned to the matchup with New York.

Moore is seen by many fans as the preferred choice due to his legendary status as a former Boise State player. A report from Jay Glazer of FOX Sunday said Moore was “torn” on whether to take the job because he could soon be in line to be an NFL head coach.

The average salary of an offensive coordinator is $1 million. Harsin was set to make $1.85 million next season. Cowboys owner Jerry Jones has spoke highly of Moore in the past and likely will be willing to offer him a substantial raise — potentially equal or greater than what he’d make at Boise State — to stay in Dallas.

Dallas head coach Mike McCarthy was asked after Sunday’s game against the Eagles about the potential of Moore leaving for Boise State and seemed to hint that a move might be imminent.

“As far as Kellen’s opportunity, or potential opportunity, it’s really not for me to speak on,” McCarthy said. “I think that is something he’ll ultimately speak on. I was asked the other day, every opportunity is unique to the individual, I can only tell you we think the world of Kellen. He’s done an incredible job here.

“We definitely respect and understand the uniqueness of this opportunity to Boise, and himself and his family. I think at the right time, that is really for Kellen and Boise State to speak on. I’ve probably said too much already, but we think the world of him.”

Moore played six seasons in the NFL with the Lions and Cowboys and appeared in three regular season games prior to his retirement in 2017. He immediately transitioned into coaching and was the quarterbacks coach in Dallas in 2018 before being promoted to offensive coordinator in 2019.

If hired at Boise State, the 32-year-old Moore would become the youngest head coach in the FBS.

Avalos appears to be next in line if Moore elects to stay with the Cowboys. Oregon is slated to play in the Fiesta Bowl on Saturday against Iowa State.

The two-time first team All-WAC selection played for the Broncos from 2001 to 2004 and led the team in tackles three years in a row. He ranks No. 4 on Boise State’s career tackles list with 365.

Avalos was an assistant coach for the Broncos from 2012 to 2018, including the last three as defensive coordinator. He left for Oregon prior to the 2019 season.

Should the Broncos be unable to land either Moore or Avalos, Montana State’s Jeff Choate could be an option. The former Boise State assistant coach has received support from former players on Twitter after leading Montana State to the FCS playoffs in each of the past wo years.

Boise State is also searching for an athletic director. It’s becoming increasingly likely that search comes first — possibly in the next few days — which would allow that person to be involved in the hiring of the head coach. With both Avalos and Moore coaching this weekend, it would seem unlikely a coach is hired prior to early next week.