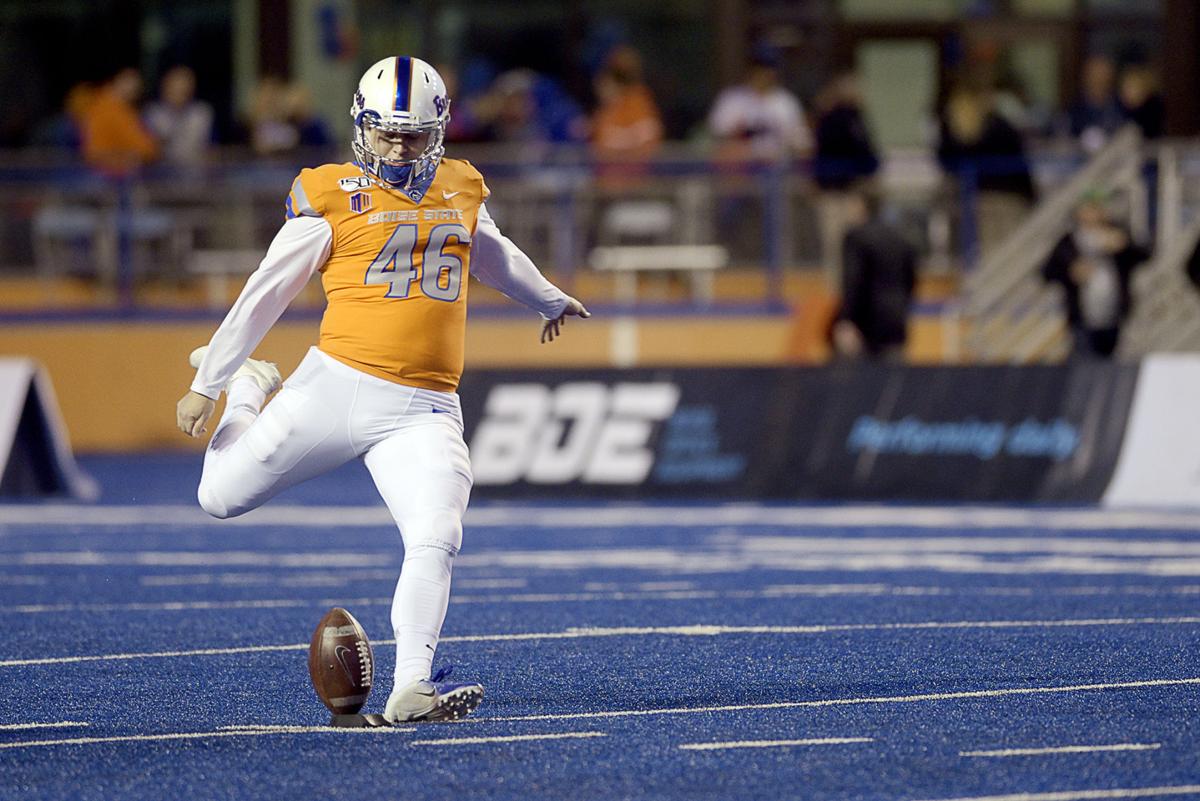 Boise State kicker Joel Velazquez (46) practices kicking before the start of the game against Hawaii on Oct. 12, 2019 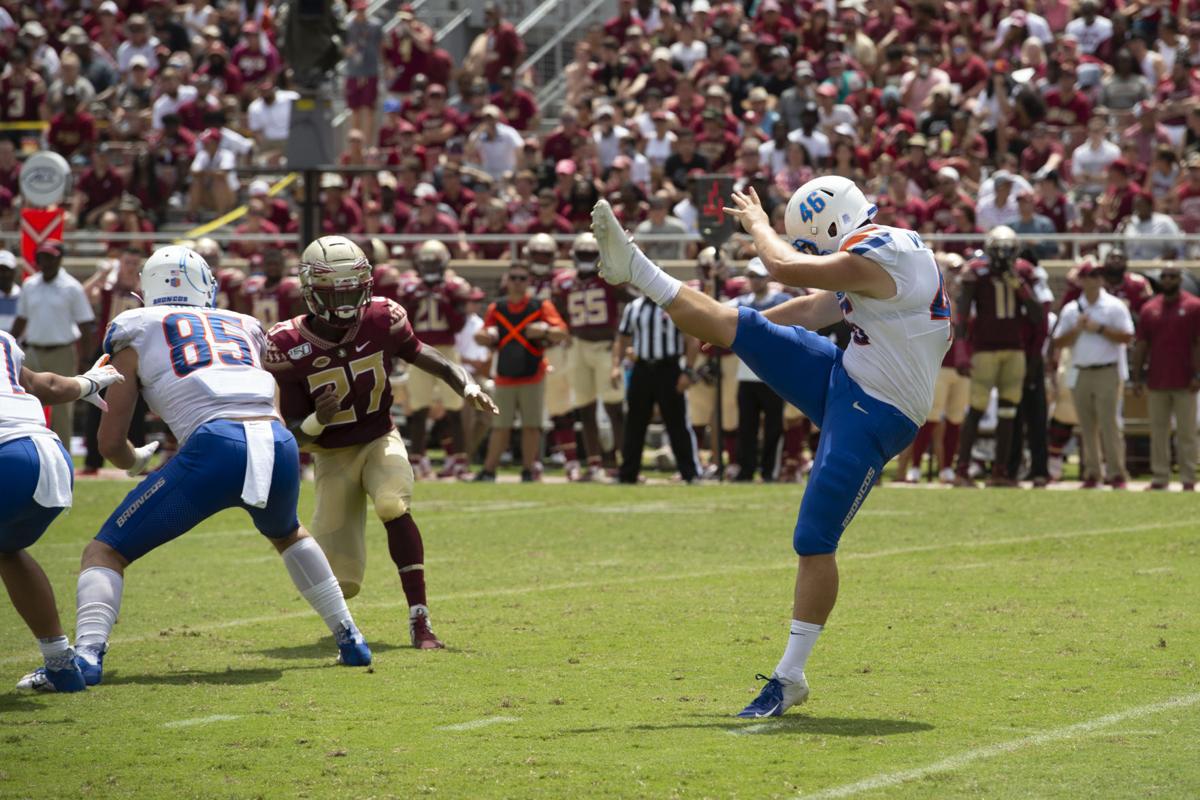 Boise State kicker Joel Velazquez (46) practices kicking before the start of the game against Hawaii on Oct. 12, 2019

BOISE — Three years after many expected it to happen, redshirt senior Joel Velazquez could end being both the kicker and punter for the Boise State football team this fall.

Velazquez, who struggled some last year at punter, finds himself also competing at place kicker with the season opener against Utah State barely a week away.

It was expected graduate transfer Johnny Messina would serve as the kicker while Velazquez would battle with redshirt freshman Gavin Wale at punter, but co-special teams coordinator Zac Alley hinted last week that Velazquez could end up doing both spots in 2020.

“He definitely potentially could,” Alley said.

Boise State hasn’t had the same person serve as both the kicker and punter since Kyle Brotzman did it from 2007-2010.

Velazquez, who also handles kickoffs, has a strong leg. He made a 52-yard field goal at the end of the first half at UNLV last year. But he’s lacked consistency and twice lost battles during fall camp at placekicker to transfers in Haden Hoggarth (2017) and Eric Sachse (2019).

That made his inclusion as the possible kicker unexpected from Alley with Boise State bringing in another transfer in Messina.

But asked about the spots and who might win the jobs, Alley named just one person: Velazquez.

“I feel great obviously with Joel returning,” Alley said. “He’s done all those things for us and he’s been really good at them. We’re excited to get him out there. I feel confident in our kicking room and the depth we have. Hopefully nothing happens to Joel and we’re good, but even some of the younger guys can go out and perform as well.”

For what it’s worth, Velazquez was made available to the media this week while Messina has yet to speak with reporters. A depth chart is expected Monday for Boise State’s Oct. 24 opener against Utah State.

Serving as the punter seemed like the most likely option for Velazquez entering camp, but even that wasn’t a sure thing. Boise State gave a scholarship to one of the top punters in the nation a year ago in Wale, who redshirted last year and was expected to compete for the spot this fall.

Velazquez served as the punter last season, but he averaged just 39.3 yards on 56 punts, which ranked ninth out of 12 punters in the Mountain West and No. 112 of the 130 FBS teams.

Consistency was his big issue. He had eight punts of at least 50 yards, but also seven of less than 30 yards. He had five punts of 21 yards or less, including just a 10-yard punt against Florida State.

“I lacked consistency last year for sure,” Velazquez said. “I’d hit some really big balls and then a lot of mishits that were falling super short. I’ve made some adjustments with my drop, my footsteps, things like that, to improve my consistency and so far I’m hitting the ball further.

“Last year was definitely not the performance I would have liked to have punting the ball, so I’m looking to hopefully come out this year and hopefully get the starting spot and do a lot better.”

Reading between the lines it seems like Velazquez will start the year handling punts and kickoffs as he did last year. The wild card suddenly is the possibility of also doing field goals.

He’s got a strong leg and served as the long field goal kicker — he once made a 65-yarder in practice — but has missed too many up close in practice in the past.

“It probably comes down to consistency up close,” Velazquez said. “That’s been the difference over the years.”

But things apparently have changed in 2020. In his fifth year in the program Velazquez appears to be in the mix at both kicker and punter — something he’s wanted to do since he first had the opportunity as a redshirt freshman in 2017 after the departure of Tyler Rausa.

“It’s definitely been my goal for a long time now,” Velazquez said. “It would be sweet to be that guy and help out my team however I can. Honestly that’s what I am trying to do. If I could go make plays in all three areas (kicker, punter, kickoffs) that would be really cool.

“It’s something I’ve been working crazy hard for every year to get that spot. I worked super hard all offseason and took advantage of the down time we had off at local high schools working with Tyler Rausa, Eric Sachse, punting with Quinn Skillin, just trying to put myself in the best position to help out the team wherever I can.”

While Alley and Velazquez both said he and Messina were “neck and neck” and said no decision had been made, it appears the opportunity is there for Velazquez to finally earn the kicking spot he’s desired for years.

Asked the biggest key to winning the job at kicker, Velazquez had the most accurate answer possible.

“Putting it through the pipes really,” Velazquez said.

He hopes to get that opportunity.