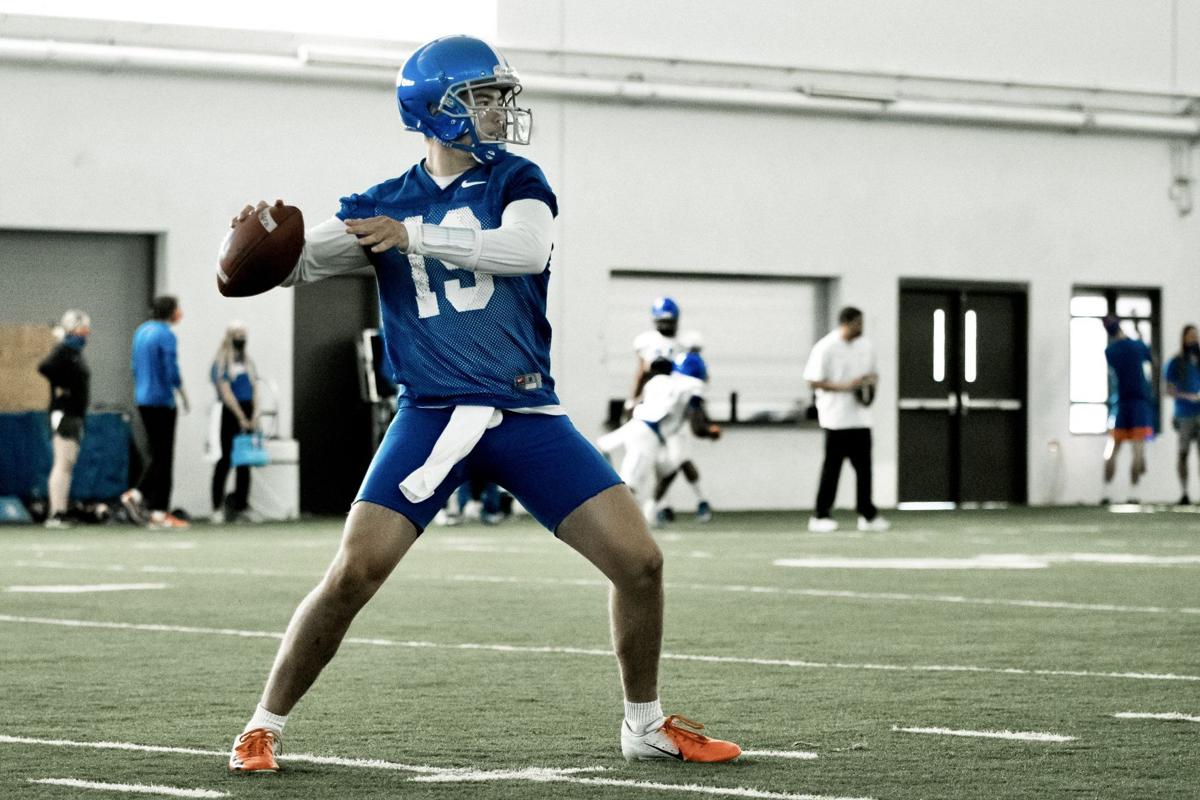 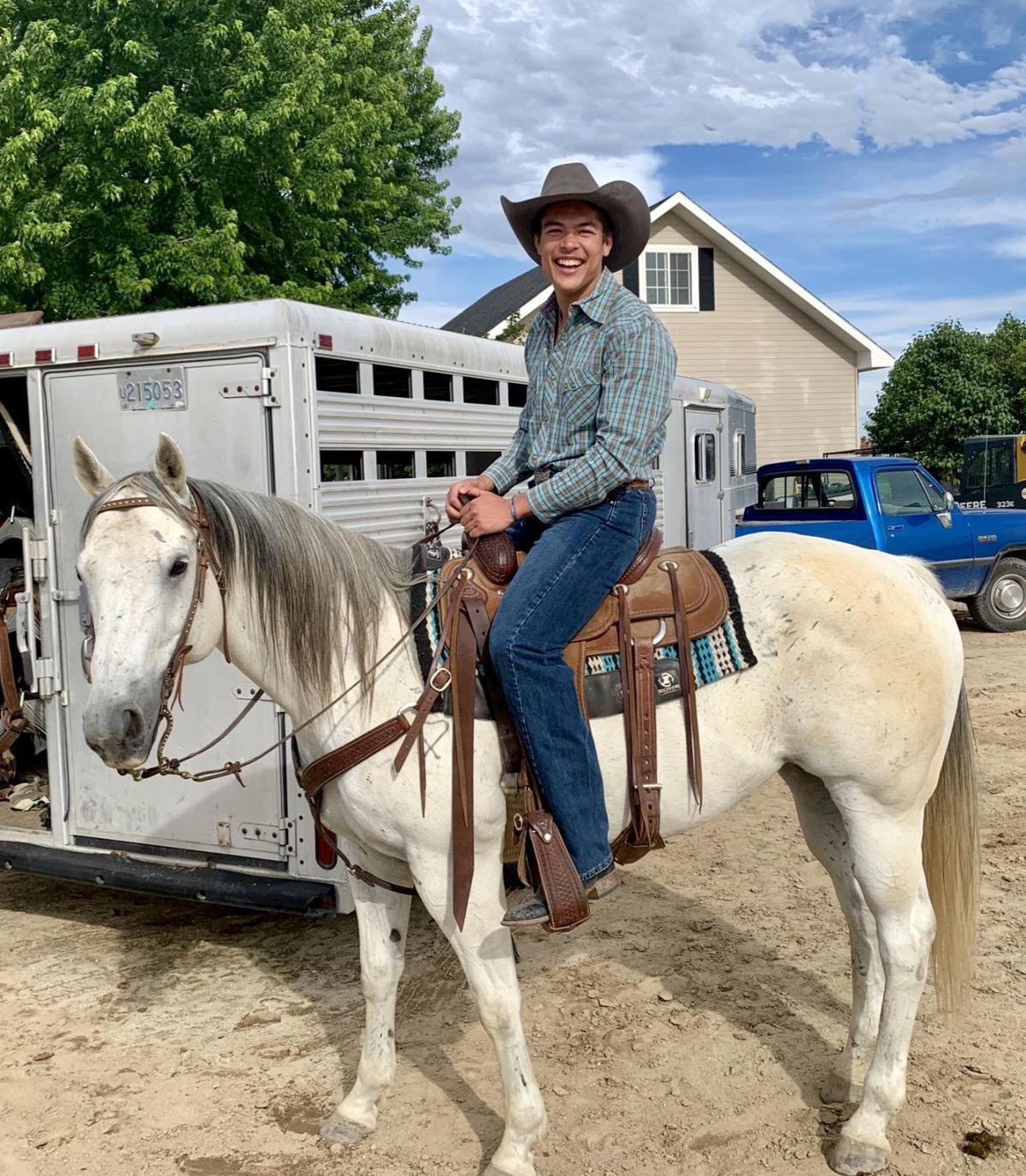 Boise State quarterback Hank Bachmeier rides a horse at teammate Tyler Eiguren’s ranch in Fruitland in June. Bachmeier called himself ‘Hillbilly Hank’ when posting the photo to his Twitter account.

Boise State quarterback Hank Bachmeier rides a horse at teammate Tyler Eiguren’s ranch in Fruitland in June. Bachmeier called himself ‘Hillbilly Hank’ when posting the photo to his Twitter account.

BOISE — Who knew a trip to Fruitland to ride horses would be the start of a new nickname for Boise State’s starting quarterback.

Unable to do much this summer due to the COVID-19 pandemic, sophomore Hank Bachmeier accepted teammate Tyler Eiguren’s invitation to go to his family ranch in Fruitland to ride horses.

The Murrieta, California, native Bachmeier loved the experience so much that he bought his own authentic western outfit to wear the next time. He then posted a picture to his Twitter account in June of him atop a horse and looking the part with a cowboy hat and boots, jeans, a belt buckle and a western shirt.

The attached message said ‘Just a Hollywood Cowboy and his dog. #HillbillyHank’.

The legend was born.

“I’m all in,” Bachmeier said. “All in on Hillbilly Hank.”

Whether the nickname sticks with him moving forward remains to be seen, but the moment showed plenty about Bachmeier’s personality. The sophomore enjoys having a good time and keeping things light. While previous starter Brett Rypien had more of a business-like approach, Bachmeier is known more for cracking jokes, laughing and not always taking things as serious.

It’s not that Bachmeier didn’t care or wasn’t serious enough while serving as Boise State’s starting quarterback job as a true freshman last year. But there’s a balance that the Broncos hope to find as he becomes a bigger leader in his second year in the program.

“It’s really getting him to know when to be serious and when to be lighthearted and when to turn it on or turn it off,” offensive coordinator and quarterbacks coach Eric Kiesau said. “He’s such a talented player, but sometimes he can come off as being goofy or funny and he doesn’t mean to do it. But it maybe comes off as he’s not taking things serious.

“We’ve talked about knowing that line as a leader and when to be firm and call guys out and take things by the horn and when there’s time to loosen up or have fun. Just picking and choosing your time to be a leader, that’s the biggest thing for him moving forward.”

Bachmeier’s personality is a big part of who he is as a person and a player, and neither side wants to see that go away completely.

“I’m not a person that’s going to be all tight on the field. I want to be loose and I want my teammates to be loose,” Bachmeier said. “But there are times when (he could be more serious). I think just to grow as a leader and as a teammate for my guys, that is something that I’m working on, just when to turn it on and when to turn it off.”

Bachmeier went 7-0 as the starter in the regular season while missing six games due to a pair of different injuries. He returned from a long layoff to start the Las Vegas Bowl against Washington, but he struggled and threw two interceptions in the loss.

He passed for 1,879 yards and nine touchdowns on the season to go along with six interceptions. He completed 63% of his passes.

In his first career start as a true freshman in the season opener, he went on the road to Florida State and passed for 407 yards while leading a double-digit comeback in the second half.

He clearly has talent. And now, with a year of experience under his belt, the Broncos are hoping he’s even better.

“I think last year he was kind of in that mode where he was just trying to figure everything out. Everything was new to him,” Kiesau said. “He had to know the motions, the plays, the formations and was doing a lot of learning on the fly, where now he has a year to settle in. I’m looking for a big jump from him. Hopefully it shows up on the field and he’ll produce some numbers for us.”

All things considered, Bachmeier played quite well for a true freshman. He showed the toughness to stay in the pocket and take hits and wasn’t afraid to scramble for first downs.

Playing college football is tough enough. Starting at quarterback for Boise State just a few months after your senior prom is something else.

And that’s why Bachmeier also agrees that the year of experience should pay big dividends moving forward.

“I had everything and the kitchen sink thrown at me,” Bachmeier said. “I really saw a lot, and reflecting on it there’s a lot of growth that can be done. ... It’s a lot different a year in. As far as an operation standpoint and running the offense, I think I’m a lot more comfortable — a lot more comfortable than last year.”

Sure there are things he needs to improve on like his footwork and knowing when to take big hits and when to give himself up. Staying healthy and on the field will be maybe the biggest key.

But for an offense that brings back most of its weapons including a 1,000-yard rusher, two of the top three receivers and the best tight end, the future for Bachmeier appears extremely bright.

“That year of experience was tremendous,” Bachmeier said. “I’m really excited to see how this season goes.”

He’s serious about it.